Invisible speakers, wireless electricity and games you can control with your brain: all of these things may sound like science fiction, but thanks to recent technological innovation, they’re officially within the realm of possibility – or even already available. Some improve quality of life while others are just plain fun, but all of these futuristic gadgets and technologies will knock your socks off with their brilliance. 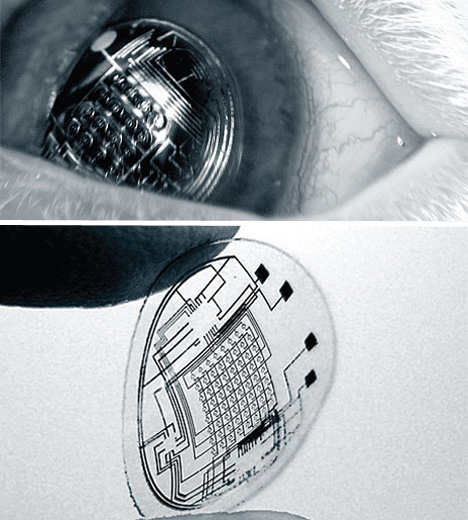 What if contact lenses could not only help you see better, but deliver directions, news, email and weather reports directly to your eyes? The technology is already here, according to a report by Babak A. Parviz, a bionanotechnology expert at the University of Washington. Tiny components like LED lights, tiny antennae and special circuits can be embedded into the polymer of a typical contact lens. A small portable device would process the information, and the lenses could even be used to measure and process information about the user’s health. 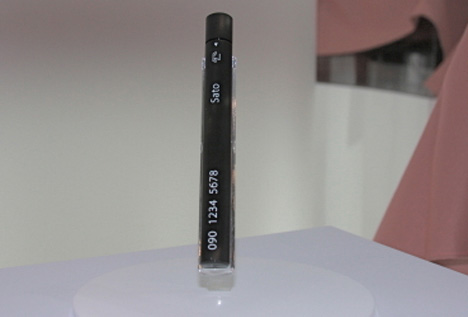 Cell phones are getting smaller and smaller, almost to the point of absurdity – but though this concept takes small size to the extreme, it’s also functional. The Adjustick was one of many futuristic cell phone concepts shown at Japan’s CEATEC technology convention. The stick-like device projects a usable keyboard and screen when placed on its side.

Games You Control with Your Brain

This alien-looking headset looks capable of doing some insidious things to your brain, but it’s actually a gaming headset by Emotiv that allows you to play a variety of concentration-based games on a Windows PC. That’s right, it actually uses your brain waves to play the games in which you can push and pull boulders, levitate objects and perform other telekinesis-like actions. It works by matching certain brain activities – like concentrating or thinking about something in particular – with certain actions during a calibration that you perform before starting the game.

Portable Gadget That Shoots You to Rooftops 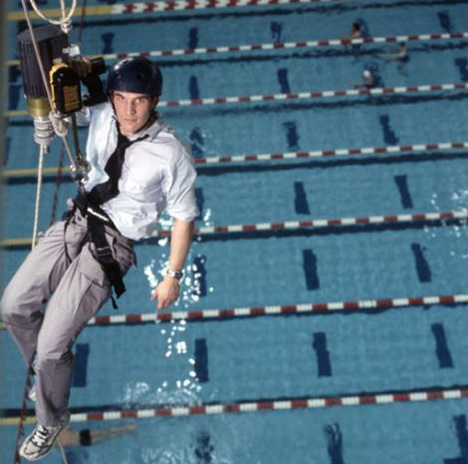 Anyone who has ever admired Batman’s ability to go from street level to the rooftop of a skyscraper in seconds will love the Atlas Rope Ascender, an awesome reverse-rappelling portable gadget that can lift a fully-outfitted soldier up to 600 feet at 10 ft/second on a single battery charge. The device has been tested by military, police and rescue organizations, who might have felt cool while using it, but probably lamented the lack of a cape. 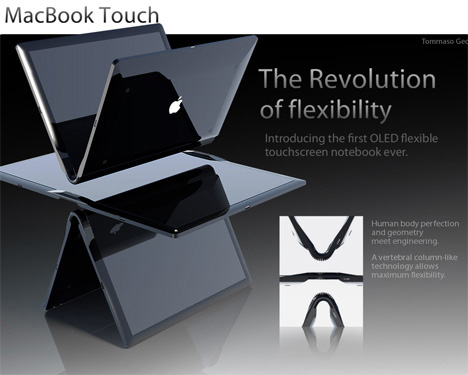 An eBook reader, full-size tablet, tabletop presentation screen, desktop computer and conventional laptop all in one… it might sound impossible, but designer Tommaso Gecchelin’s MacBook Touch does it all. Theoretically, that is – the integral part of the design that allows such flexibility, called the iSpine, relies on technology that doesn’t exist yet. But the idea has potential, and it’s a tantalizing possibility for anyone who has ever daydreamed about such an achievement in multi-functionality.

If you wonder why on earth a computer mouse would need 18 buttons, perhaps the Warmouse OOMouse isn’t for you. But those who see the potential of this customizable little gadget will be able to save a whole lot of time by packing tons of functions into the press of a button. It’s designed to be used with Open Office, but could also be used with other applications.

Get Directions from a Rainwater-Powered Manhole 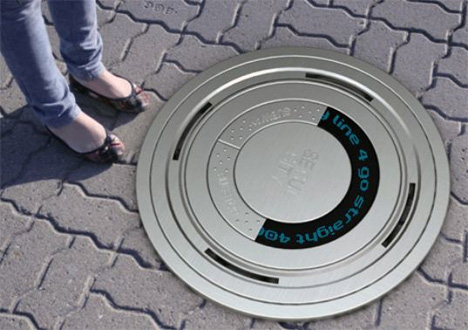 Wouldn’t it be nice if, when visiting a new city, you could simply get directions from a nearby urban object instead of unfolding and puzzling over a map? A concept called the EcoSign would turn ubiquitous manhole covers into rainwater-powered information centers that can give you directions. The only problem is, manhole covers tend to be in the middle of busy streets – not exactly safe places for tourists to congregate. 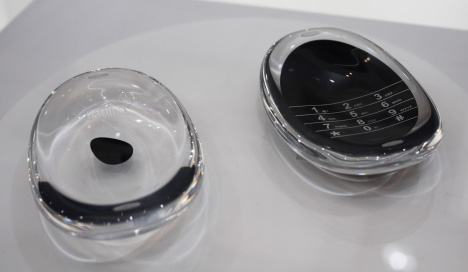 This strange little hunk of ergonomic plastic doesn’t resemble any cell phones currently in mainstream use, but its unusual design isn’t all about aesthetics. The Amoeba Phone contours to the user’s face while in use, and its entire surface is a touch screen.

Speakers are invariably ugly, and even tiny models that pack a big aural punch are just another object to clutter your living space. But an innovative new type of speaker is virtually invisible, pouring surprisingly decent sound forth from a clear membrane across your television screen. Edge Motion invisible speakers work by using piezoelectric actuators to cause sound vibrations in the membrane, which don’t affect the picture quality. The technology is set to be included in a range of upcoming consumer products like hand-held games and portable DVD players.

Prosthetic Limbs Powered by the Mind 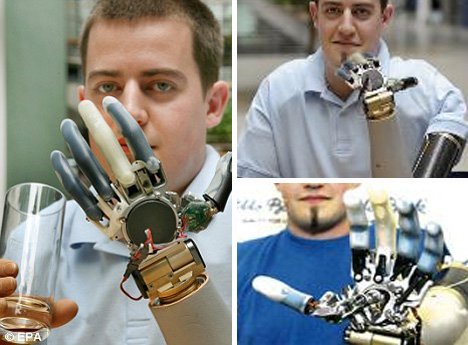 Stiff plastic prosthetic limbs may help amputees feel whole again, but they don’t offer much in the way of independence. Luckily for Christian Kandlbauer, who lost both of his arms in a work accident in 2005, amazing new advances in prosthesis technology have enabled him to do things for himself again – through the power of his mind. Kandlbauer is equipped with incredible new prosthetic arms that are wired to his nerves, a procedure that only three surgeons in the world can perform. Now, Kandlbauer can activate his “muscle” movement with impulses from his brain. 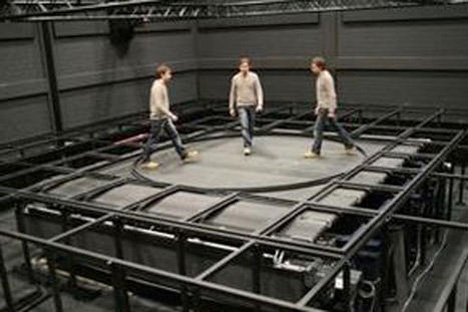 One of the biggest challenges to making virtual reality a – well – reality, is locomotion. Anyone trying to navigate a VR environment needs to be able to walk in any direction, but treadmills only move in one direction. Until now. CyberCarpet is an omni-directional treadmill that densely packs small balls under a walking surface, letting the friction of the user’s shoes to do the moving. The CyberCarpet’s usefulness doesn’t end at gaming, though – it can be used for therapy, training and other applications as well.

When it comes to your health, few things are quite as important as getting plenty of sleep. But the quality of your sleep is just as vital as the length of time that you spend in bed each night. A futuristic new alarm clock design called the Zeo alarm clock tracks how much time you spend in each stage of sleep through a thin headband worn by the user, reporting your ‘sleep score’ in the morning. It even has a function that can wake you up at the ideal point in your sleep cycle, so you feel more refreshed. 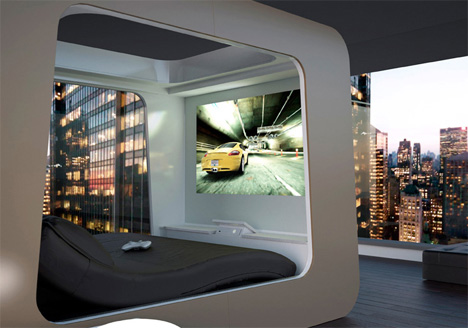 Not only is the slick HiCan bed super cozy and modern, it’s also equipped with everything you need to spend the rest of your life as a media-consuming blob – or at least, be extremely entertained on sick days. This all-in-one bed and entertainment center has a pull-down projection screen, integrated gaming system, built-in lights, and even a control panel that allows you to control your home’s window shades and lighting. The price tag of 42,000 Euro puts this amazing piece of furniture firmly in daydream territory for most.

Imagine being able to place your electronics anywhere you want, with no regard to whether there’s a power outlet nearby. It would cut a whole lot of clutter and eliminate hazards to children, pets and clumsy adults. Somehow it seems like wireless electricity should already be a reality, but there have always been obstacles in the way. However, engineers at MIT  have worked out the kinks and wireless power could be in our homes as early as 2011. 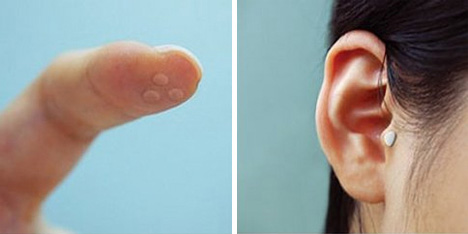 When you come across a word you aren’t familiar with, perhaps you just skip it over or go through the trouble of looking it up in a dictionary or online. Wouldn’t it be so much easier if you could just place your finger over the word and magically hear its definition and pronunciation in your ear? Incredible as it seems, the Touch Hear concept would do just that, minus the magic part. An implanted device in the fingertip recognizes the characters while another device in the ear relays the information. It’s still just a concept, but it could be a viable future option – particularly for blind readers.