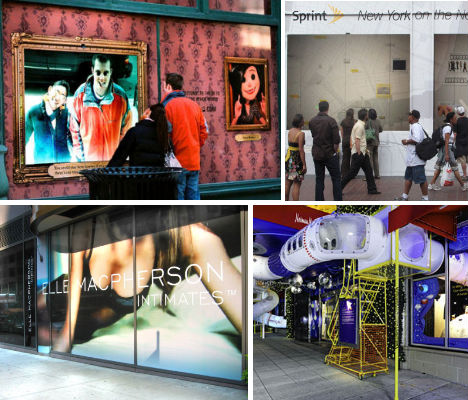 In a world where advertisements are plastered all over every surface, from benches and stairs to pedestrian crosswalks, businesses are turning to high-tech interactive displays that all but reach out and tap us on the shoulder as we pass. We’re captivated by holograms, drawn in by images that react to our gestures, distracted by swooping motion-activated ads and entertained by exhibits that give us control over objects in the store window. Could these interactive window displays be a glimpse at the future of advertising? 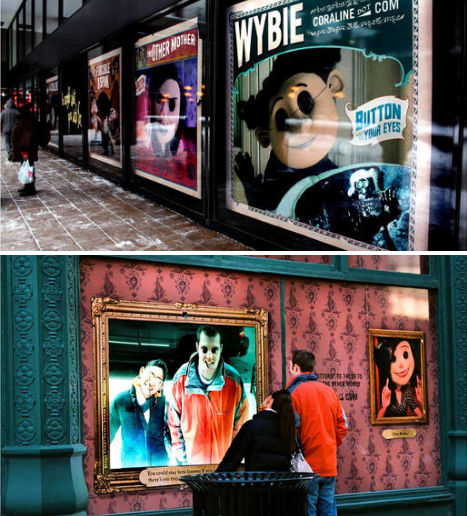 Passersby found it impossible not to get drawn in by the massive moving displays that appeared in seven cities around the world including London, Boston and New York just before the release of Henry Selick’s Coraline, a stop-motion animated film based on the book by Neil Gaiman. Not only did creepy ghosts emerge from holographic fog, but viewers were startled to see themselves with their real eyes replaced with buttons. 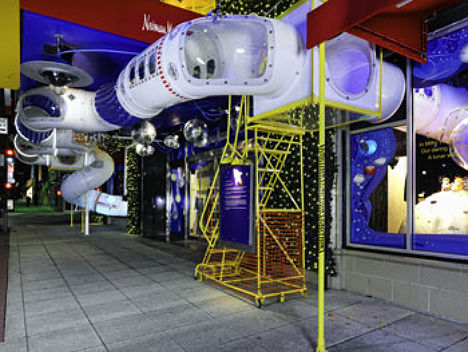 Neiman Marcus gave a whole new meaning to ‘interactive window display’ with their Dallas storefronts, which are far more interesting – at least to children – than the fanciest, most high-tech electronic illusion. The store invites kids to climb into a tunnel, peer into the store and then go down a slide that routes them back out to the sidewalk. Meanwhile, adults can text a number from their phones to control special effects inside the display or even use their camera phones to place themselves in space scenes.

Wait a minute – did that seaweed just move when I walked by? Yes, anyone who walked past one of Carnival’s interactive aquarium window displays would have triggered a motion sensor that moved the digital underwater vegetation inside the ‘tank’, but that’s not all these displays did. Using their mobile phones, visitors could call a number and create a digital fish for the aquarium using voice commands, and then move it around in the tank using their keypads. The display was designed to get people interested in the ocean, and hopefully lure them into a cruise. 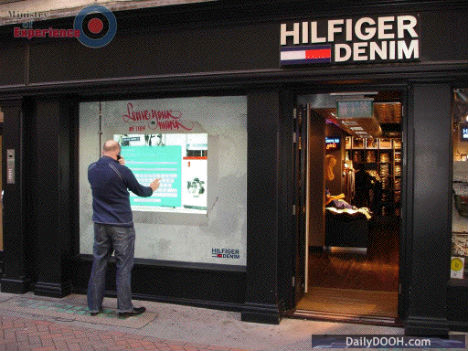 Can’t resist touching stuff in stores? Touch all you want, said Tommy Hilfiger with this display that let users enter themselves into a ‘hall of fame’ through a window touch screen. Visitors could capture images of themselves, style their likeness in Tommy Hilfiger clothing and then submit the image to a collage gallery shown on digital screens in the shop windows. They could even have the image printed onto a t-shirt, and join the likes of Paris Hilton in walking around with their own faces emblazoned on their chests. Not that there’s anything wrong with that. 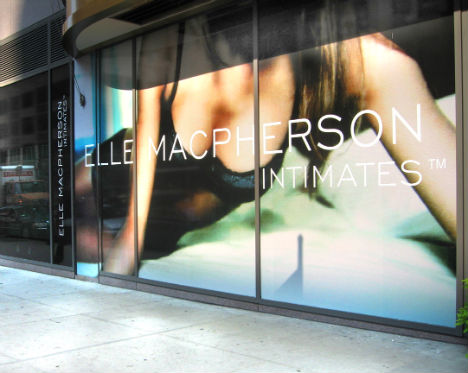 Elle MacPherson Intimates followed a cardinal rule of advertising in this undeniably eye-catching interactive campaign: sex sells. Especially barely-covered breasts the size of boulders. Anyone passing the blacked-out store windows when the display was active in 2007 got a big surprise in the form of a giant black bra that swooped into view at their approach.

Sprint Is Watching You 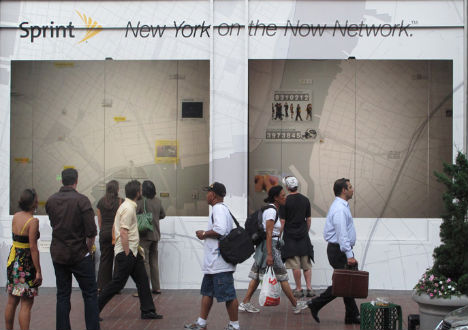 You’re walking down the sidewalk and suddenly get a strong feeling that someone’s following you. Except it’s not someone – it’s something. A digital something, on a big screen next to you. Yes, Sprint is watching you, and they want you to play along.

“GestureTek’s camera technology is the heart of the system. It tracks and identifies people as they walk by, enables the advertisement to follow them, and grabs people’s attention so they take the time to play interactive games from Megaphone and communicate with Sprint on their mobile phone,” said Bastien Beauchamp, Business Development Representative for GestureTek.

Vodafone employed some rather cheery and in-your-face holographic effects for this 2005 campaign.

Diesel assumed that fans of its ‘Destroyed’ jeans just plain like destruction, so they created this bizarre but award-winning interactive display in storefront windows designed to capture the attention of tech-obsessed youth. Motion Tracking technology grabs the visitors’ image and places it inside the display, where the user can manipulate their ‘mirror image’ and its surroundings.

Sniff from karolina sobecka on Vimeo.

Not all interactive displays are created by companies that want to sell us something. Artist Karolina Sobecka teamed up with software designer Jim George to dream up ‘Sniff’, a computer-generated projection of a dog that responds to the movements of people that pass by. The dog chooses people to approach and reacts to their gestures, getting bored, friendly or aggressive.

People walking past this Scion window display were certainly surprised when the bubbles on the screen reacted to their movements. Viewers could make punching or kicking motions to send the bubbles – which contained images of Scion vehicles – flying into the digital distance.

It might not be a giant bra, balls you can kick or a vain exercise in digital dress-up, but this display for Target and Converse is certainly a lot more eye-catching than a mere two-dimensional billboard. The motion of passersby set off a display of images that followed the pedestrians as they walked, and activated videos.

Another artist utilizing a typically commercial interactive window interface is Robert Stratton. Entitled ‘semiboneless’, the project transformed a store window into an electronic canvas that responds to hand movements, letting users move and manipulate bands of color into their own works of art.