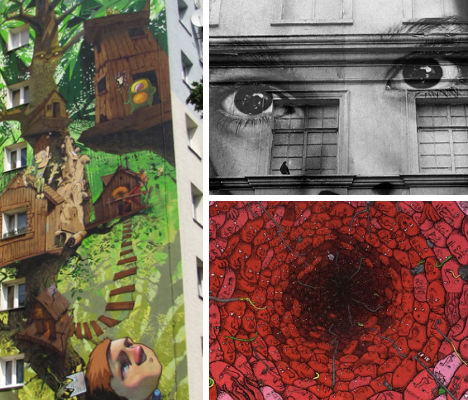 Far removed from the small-time taggers that can’t resist any unmarked urban surface, muralists and street artists bring gallery-worthy art to the streets where they can be enjoyed by all. Sometimes the murals are commissioned and sometimes they’re done guerrilla-style under cloak of night, but splashed across the surface of a bare concrete wall or the unadorned face of an abandoned building, they’re a welcome touch of color and character. 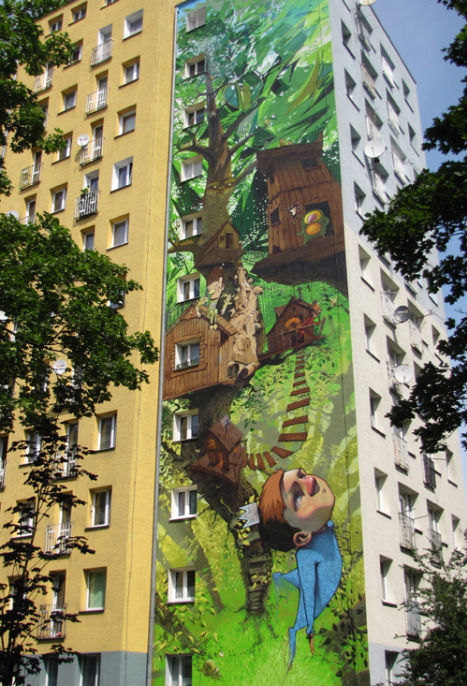 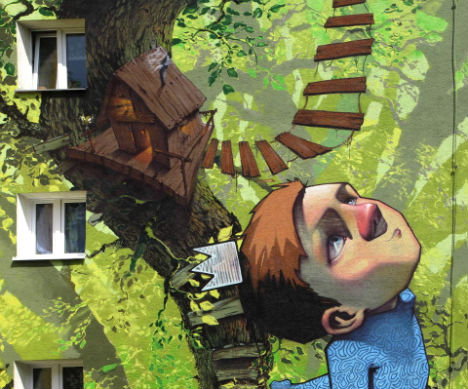 A mural of any size is quite an undertaking even for experienced artists, but imagine painting the entire facade of a 12-story building. Swiatecki, a Polish painter, graphic designer and urban activist, says that this impressive stylized treehouse – which even incorporates some of the windows on the building into the design – took 9 people, 350 80-liter cans of acrylic paint, 3 months and 7 days to complete. 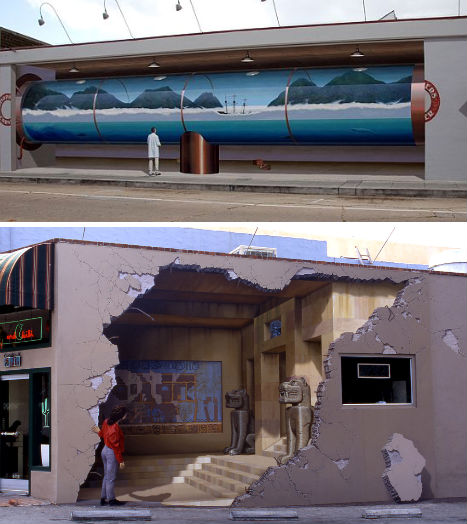 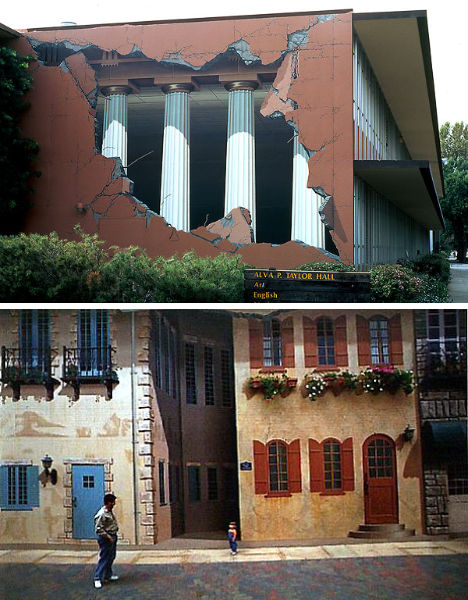 Celebrated 3D mural artist John Pugh has created stunningly deceptive works of art all over the world. In Santa Cruz’s ‘Bay in a Bottle’, Pugh trucks us into seeing the so-real-you-could-touch-it figure of a man standing in front of a landscape scene inside a transparent tube. Another mural, Siete Punto Uno in Los Gatos, California, reveals  a temple to the Mayan jaguar god – considered “the propitiator of earthquakes”. Amazingly, even the woman peering inside is painted.

“I have found that the “language” of life-size illusions allow me to communicate with a very large audience,” says Pugh on his website. “It seems almost universal that people take delight in being visually tricked. Once captivated by the illusion, the viewer is lured to cross an artistic threshold and thus seduced into exploring the concept of the piece. I have also found that by creating architectural illusion that integrates with the existing environment both optically and aesthetically, the art transcends the “separateness” that public art sometimes produces. “ 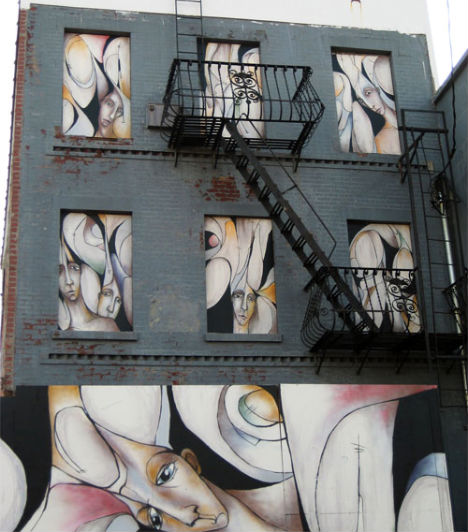 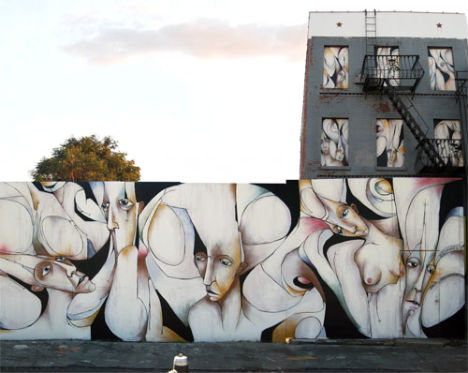 In the boarded-up windows of an abandoned building that would otherwise be an eyesore are dreamy abstracted figures rendered in spray paint and latex acrylic – matching those on a nearby wall. These paintings by Damon Ginandes are in his home neighborhood of Red Hook in Brooklyn, New York. Ginandes, who has worked in film post-production, is now pursuing art full-time and also shows in galleries. 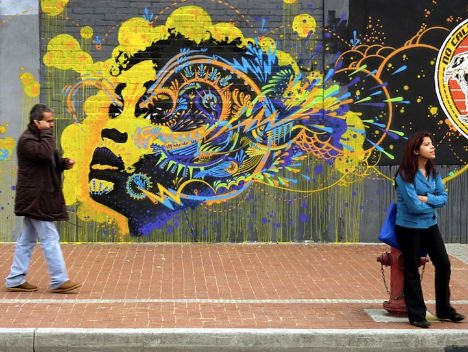 The streets of Colombia get exciting blasts of color in the most unexpected forms thanks to street artist Stinkfish, who uses photographs of his friends and family to create the realistic yet stylized portraits seen all over the country.

Vortex of Faces by Liqen, Spain 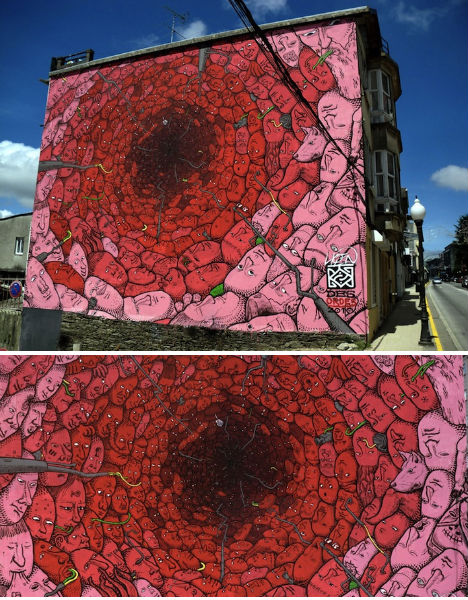 You could stare at this massive mural by street artist Liqen for hours, continually noticing new details like dog faces, hands, tentacles, stitches and other odd inclusions. But take care not to get sucked in – it looks kind of scary in there. 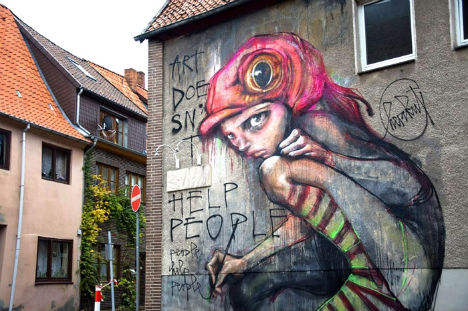 Hera plus Akut equals Herakut, a male and female duo of graffiti artists that combines their contrasting styles to create vivid, unusual murals and street art like this piece on a wall in Germany. Akut puts down a base layer of spray paint and then Hera comes in and adds painterly details that are more often seen on canvas than on brick and concrete, making their collaborative efforts some of the most distinctive in the world of street art. 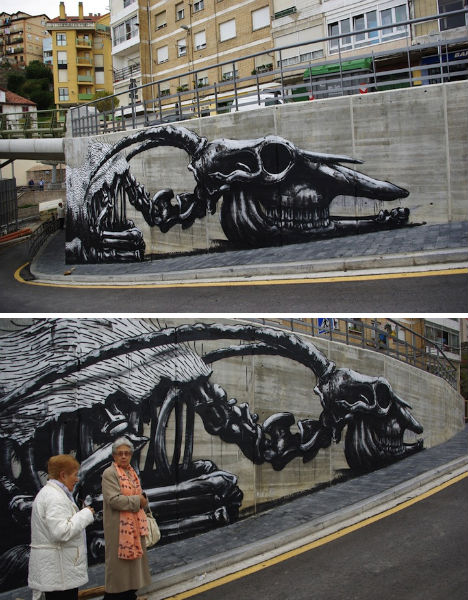 When a gigantic black and white animal appears on a wall in an urban area, one graffiti artist is more than likely responsible: Ghent, Belgium-based ROA, whose street work has been seen in metropolises around the world from New York to Warsaw. ROA has also begun exhibiting in galleries in 2010, including a show at London’s Pure Evil Gallery in April. 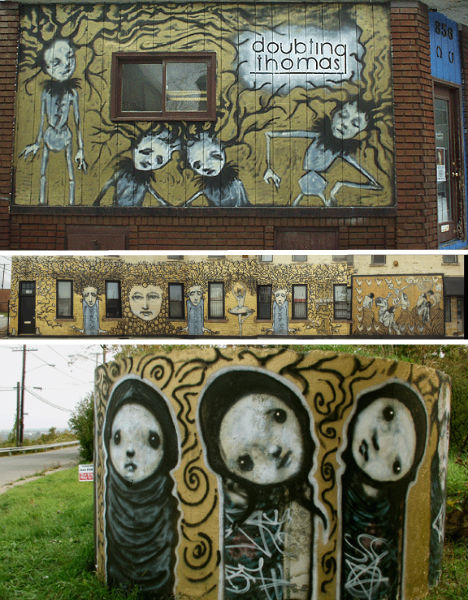 Known internationally for his dark yet charming marionettes and sculptures, Ohio artist Scott Radke has also graced his home town of Tremont as well as Ohio City with several public and privately commissioned murals in his signature style. Beloved by locals, some of the works were threatened by the sale of the land they stood on, but the painted cement shapes that were once part of a playground were moved and auctioned off to collectors. 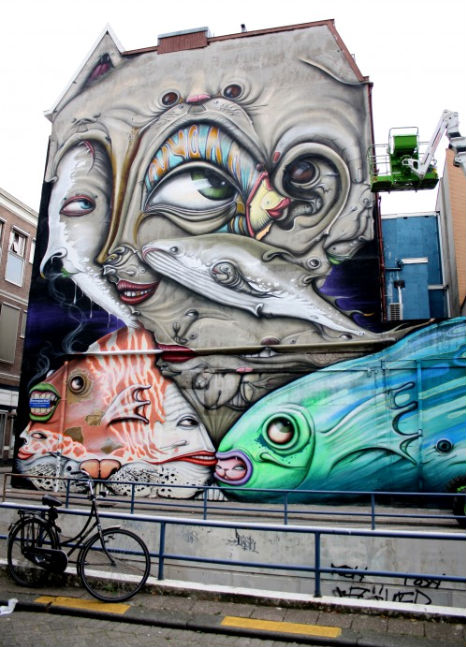 Brazilian artist Andre Dalata made this whale of a mural in Rotterdam, mixing sea creatures like stingrays, porpoises and fish of various species into a surreal many-eyeballed conglomeration. Dalata, who started his street art career in 1997 in his hometown of Belo Horizonte, often incorporates nature into his designs. 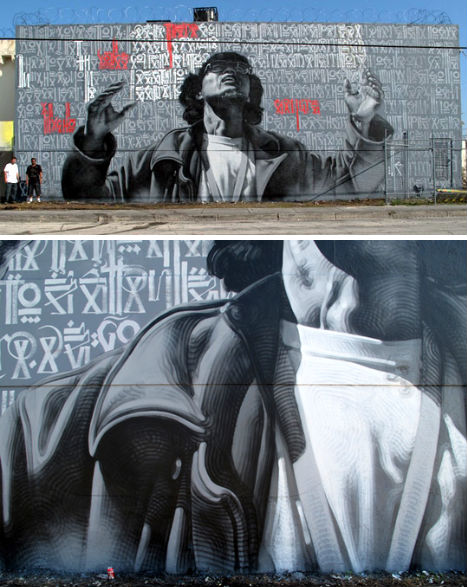 Every year at Miami’s famed Art Basel modern art exhibition, street artists The Mac and Retna team up to create a new mural. This one, from 2009, was painted for the Marguiles collection as part of Primary Flight, an annual street art installation throughout the Wynwood Arts District in Miami. Retna’s responsible for the background while The Mac paints the figures in his signature engraving-like style. 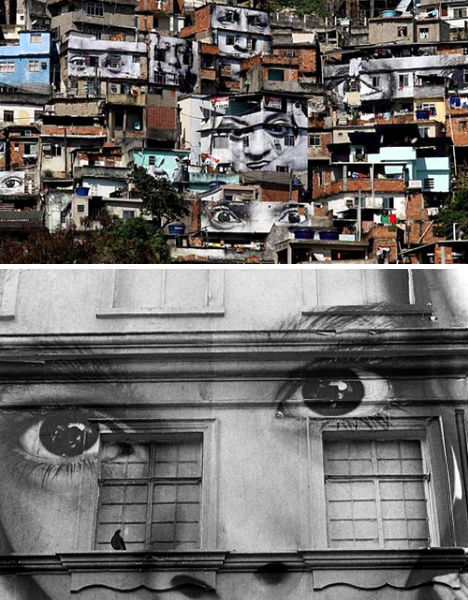 The hills have eyes, literally, thanks to “photograffeur” – that’s photographer and ‘graffeur’, French for graffiti artist – JR, who gave a downtrodden Brazilian favela a curious makeover. The artist, known only by those initials and nearly as mysterious as Banksy, travels to downtrodden neighborhoods to carry out his largely unauthorized photo-pasting projects. But far from being angry about the work, locals – who are themselves typically the subjects of the photos – see him as a hero. Some of the photos, printed on waterproof vinyl, double as new roofs.

JR was awarded the 2011 $100,000 annual prize from the TED conference (technology, entertainment and design) and says he will reinvest the prize money into his ever more ambitious projects, just as he did with the $35,000 he made from selling one piece at auction in 2009.

“If there’s one thing I’ve always taken care of with my work, it’s that it’s never an advertisement for anything other than the work itself and for the people it’s about ? no ‘Coca-Cola presents,’ ” he told The New York Times. “I think the TED people knew that that was one of my main concerns, and I feel pretty sure that we can come up with a project that works that way.”

Fish on a Hillside by Haas&Hahn, Brazil 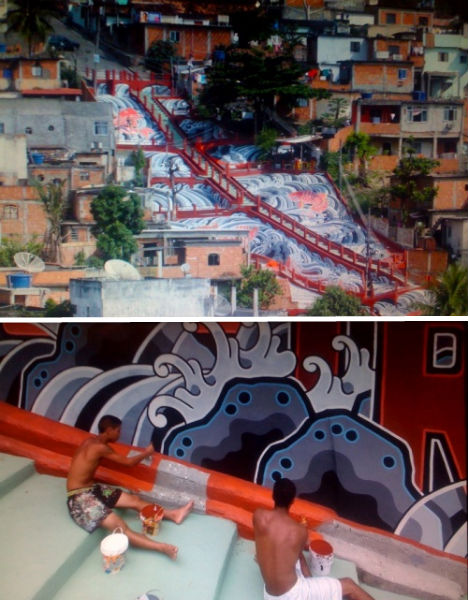 Before they turned the Santa Marta slum in Brazil into a cheerful candy-colored canvas, street artist duo Has & Hahn worked on a project that is perhaps even more impressive. An ugly concrete hillside in another Brazilian favela was transformed into an ocean full of fish in a Japanese-inspired, tattoo-like style. 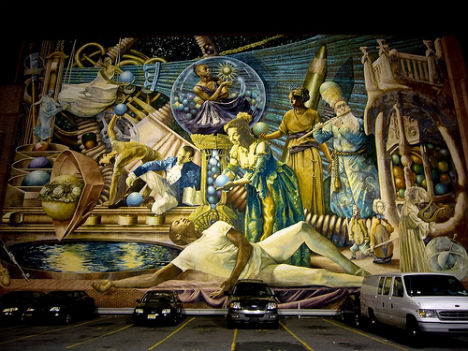 The city of Philadelphia is resplendent with incredible works of public art, and many of them originated in the mind – and on the computer – of artist Meg Saligman. Saligman, known for works like “Philadelphia Muses” (above), “Theater of Life” and “Passing Through”, creates the designs and then works with the community so they can paint the murals themselves. Her designs have been brought into reality with the paintbrushes of city residents and even prison communities. Saligman’s work isn’t limited to Philly – it can be seen around the world. Among her works is the largest publicly funded project in the U.S., located in Shreveport, Louisiana.