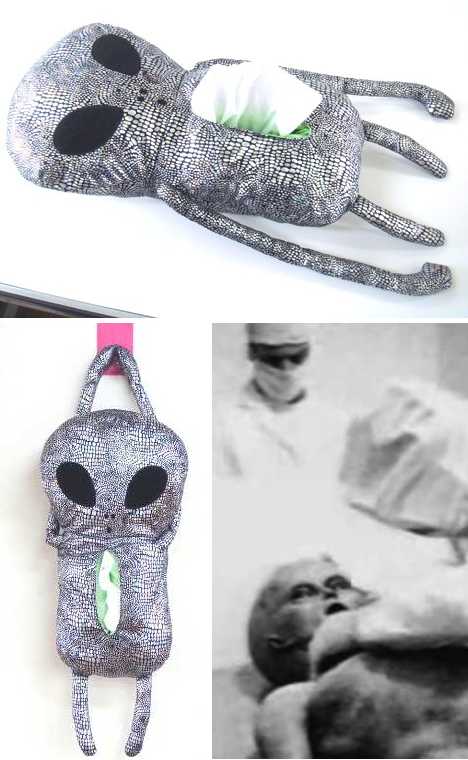 Roswell that ends well? No one would call Alien Autopsy: Fact or Fiction a tearjerker, especially after Ray Santilli admitted his mid-nineties, 17-minute dummy dissection broadcast by FOX TV in 1995 was merely a “reconstruction” of a supposed autopsy conducted at the Roswell UFO crash site in 1947. Whatever, once something enters pop culture it’s there to stay, and the Alien Autopsy Tissue Box Cover just underscores that fact. 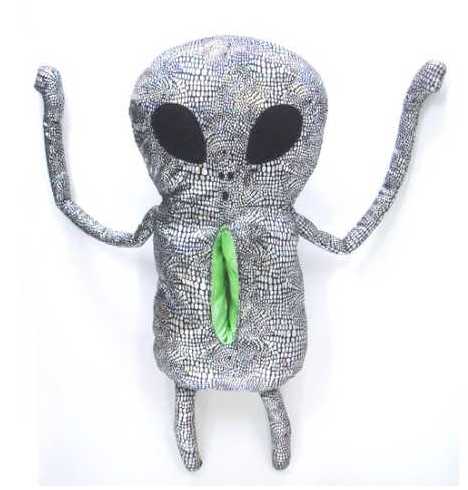 Japan’s Village Vanguard offers the Alien Autopsy Tissue Box Cover to all those who Want To Believe. Besides, what sci-fi freak wouldn’t want to pull, ahem, “tissues” out of a silver-skinned alien creatures abdomen? 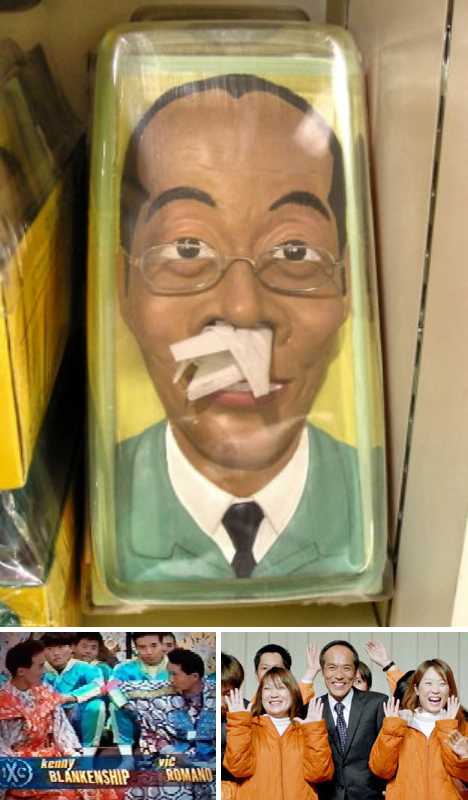 (images via: A Typical Life, Lunar Boulevard and Super-Gaijin ’76)

Spike TV’s MXC (Most Extreme Elimination Challenge) has been off the air since 2007 but Vic Romano’s slick sidekick Kenny Blankenship (actual name: Hideo Higashikokubaru) hasn’t been letting the grass grow under his heels – he was the governor of Japan’s Miyazaki Prefecture from 2007 through 2010. Higashikoku, umm, “Kenny” parleyed his previous experience in the entertainment industry and possibly his alleged stint as a brothel manager towards self-promotion while he was The Guv, the uniquely interesting Kenny Blankenship Tissue Box Cover above being a typical example. 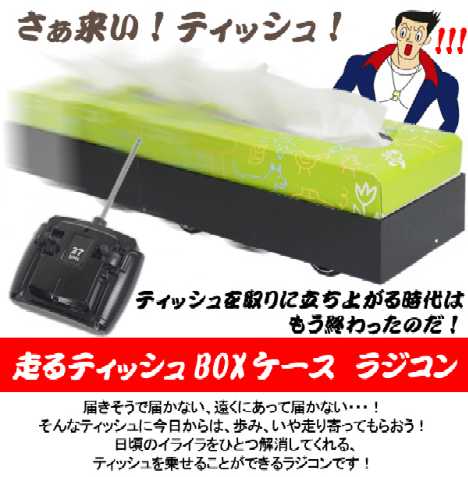 In non-Soviet Japan, tissue box reach for you! Or more accurately, roll to you as long as you’re in possession of the handy-dandy remote. The 25-buck Radio Control Tissue Box Case may have an unimaginative name but quit sniggering, smart guy. Someone not only thought up the concept, they had the stones to put it into production. 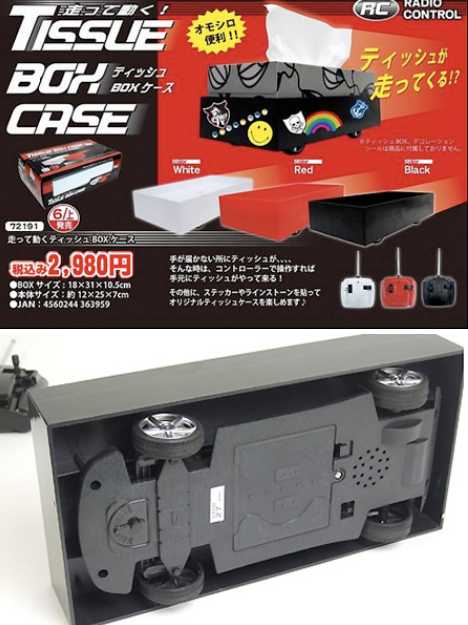 A killer cold can sap one’s energy, no argument there, but if you can’t motivate your feverish carcass within an arm’s reach of the tissue box than maybe you should be in a hospital and not on the sofa. Then again, maybe you’re completely healthy but totally mean as you gleefully lead your infectious S.O. on a paper chase around your shared abode. 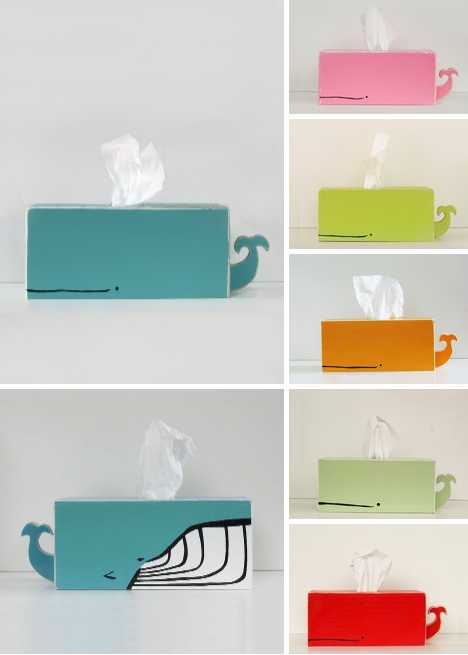 (images via: A Sparkly Pony)

Thar she blows!!… you gleefully shout as your flu-infested wife grabs her 40th tissue of the day – and then throws the Spouting Whale Tissue Box Cover at your head. Crafted from wood and sporting an enigmatic smile, this is one tissue box you want close at hand when bad news makes you blubber. Besides a Humpback Whale design in cool cyan, sneezing seafarers can also enjoy the Sperm Whale Tissue Box Cover (though you’ll probably want to keep it away from teenage boys) in your choice of surf blue, cyan, green, seafoam, orange, yellow, pink, red and white… the last being ideal when Ahab goes “achoo!” 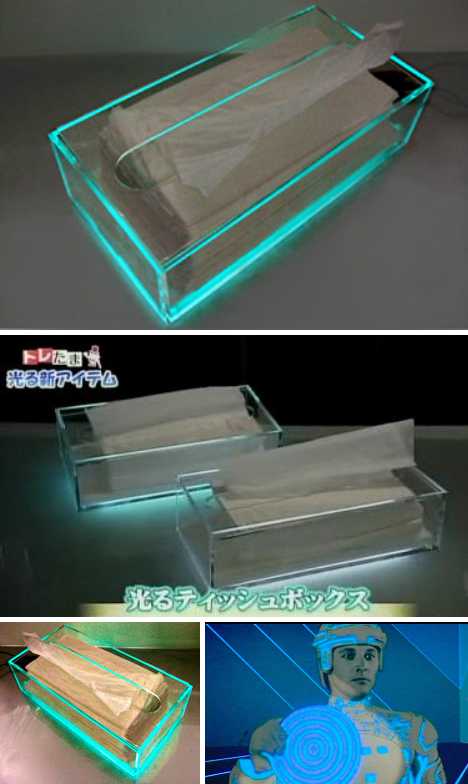 Would you pay $122 for a tissue box cover? Now hold on, the EcoLife Box isn’t any old tissue box cover – the otherwise transparent lucite box emanates an eerie, TRON-like glow thanks to a cool-running electroluminescent sheet that fits under any box of store-bought tissues. Manufactured and sold by Kaikosha of Japan, the EcoLife Box was conceived by an engineering student at Hosei University who woke up one night in need of a tissue and couldn’t find the box in his darkened bedroom. First world problems…. guess he couldn’t find the light switch either. 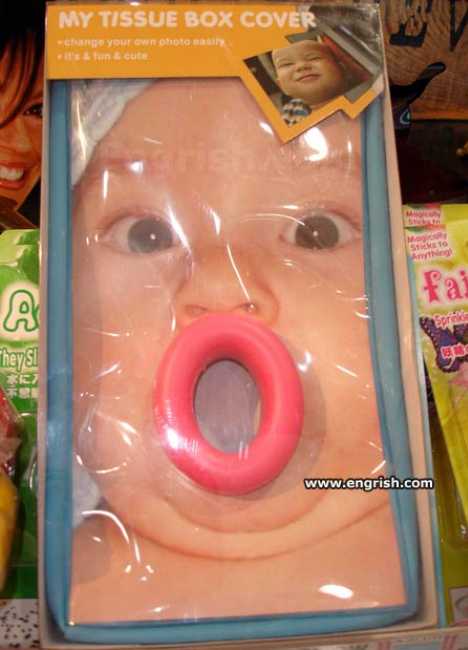 “It’s & fun & cute,” and not weird at all: a transparent-topped tissue box owners can personalize by inserting a photo of their loved one, typically a child. In practice, however, the product goes so far beyond being weird it threatens to short-circuit the space-time continuum. We’re not sure where this bizarre tissue box cover would best fit the décor but if the Bunny Ranch places an order for a gross (pun intended), no one will be the least bit surprised.