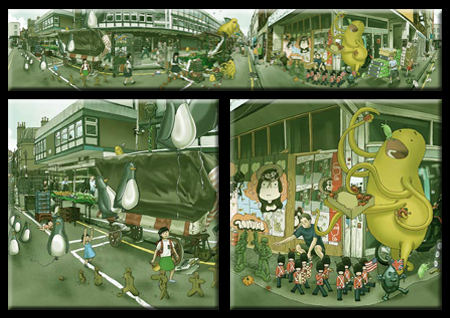 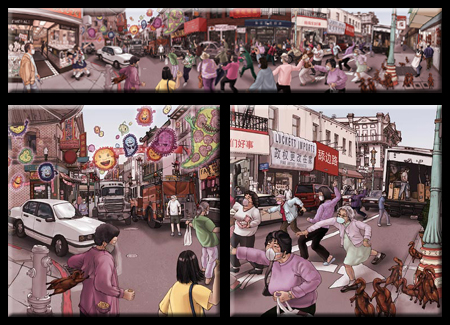 Chinatown, San Francisco: The Yum-cha Militia has been the header of Web Urbanist for some time now, and has received praise from numerous readers. This piece depicts “the imaginary history of the Yum-cha militia … an old chinese ladies’ auxilliary group that mostly spends it time playing mah jong and gossiping” in a fight against the SARS virus on the streets of San Francisco. 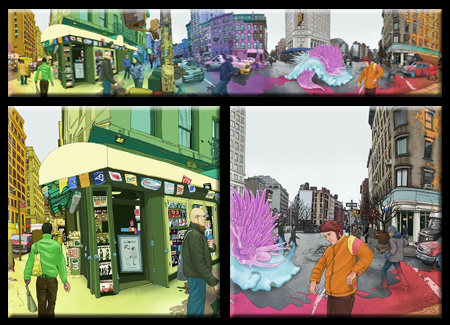 Soho, New York: The Amorous Nudibranchs Paint the Town Red plays on the classic idea of a night-on-the-town alluded to in the title. However, in this case, the painting is being done by “magical sea-slugs, out on their first date in the streets of Soho.” This illustration shows the artists’ keen interest in and attention to color as well as the more whimsical side of their work. 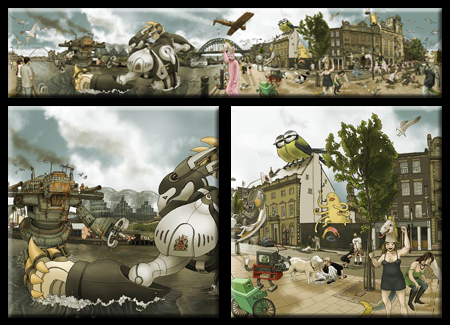 Newcastle Upon Tyne, UK: A matter of PRIDE: The Battle on the River-Tyn is a truly fantastical work, illustrating imaginary epic battles and featuring (if you look closely) recurring characters from other pieces they have created. The particulary mixed nature of this piece is perhaps a reflection of the fact that they “had a blast” while visiting. 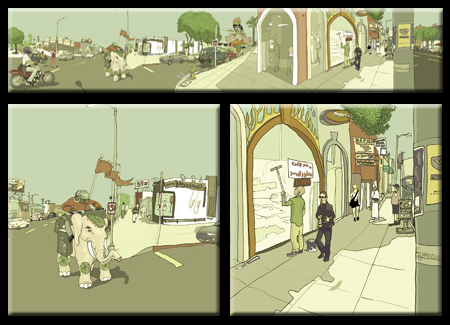 Melrose Avenue, LA: Wasteland sum this scene up well, which Kozyndan describe as “weird” but “mostly dull” place. The colors of this work suggest the desert, reinforced by the relative emptiness of the scene, which is only punctuated by a few odd creatures here or there.

London, England: Like Sands Through the Hour Glass… shows the strange mix of activities, both real and surreal, of a street in London that Kozyndan “love to hate.” The varied uses – from adult video stores to crepes stands – are mirrored by the strange blend of characters that occupy this scene. 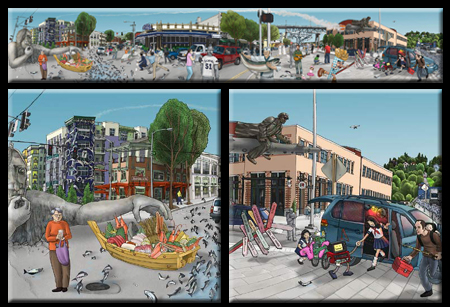 Fremont, Seattle: Portaits From the (Off) Center of The Universe interprets the struggle between opposing forces in this regionally famous community. In Fremont, hippies, corporate interests, Scandinavian heritage and the fishing industry all struggle to assert themselves. While still creatively surreal, this piece also shows Kozyndan’s interest in social and cultural factors.

Kozyndan have done an impressive variety of work beyond panoramic murals! Be sure to visit the Kozyndan shop, which features everything from rare prints to popular posters. Also: our special thanks to the pair for generously allowing us to use their work as our header image!