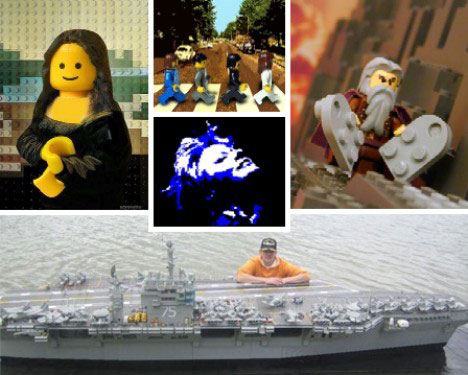 LEGO … it’s the best thing to come out of Denmark since, er, danishes. Much more than just a children’s toy, LEGO pieces make ideal artist material due to their exceptionally versatile design. These 20 essential works of LEGO art illustrate just what can be accomplished with a little inspiration and a LOT of LEGO bricks. 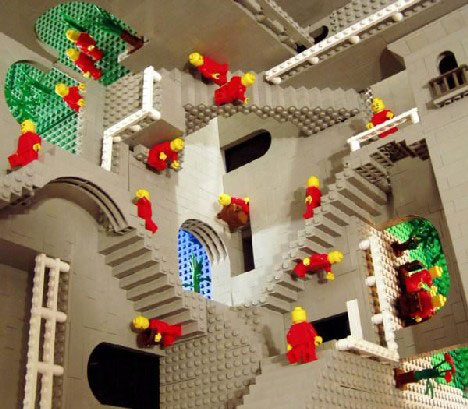 When does art begin and LEGO end? The line is especially vague when the artist being emulated is the late master of skewed perspective, M.C. Escher. The meticulous multicolored masterpieces of LEGO art created by Daniel Shui and Andrew Lipson are a true homage to Escher’s vertigo- inducing vision. The above piece is modeled after the 1953 lithograph, Relativity. 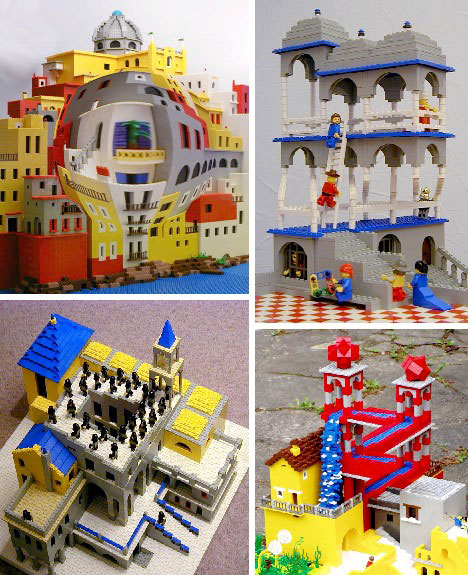 Other creative recreations including uncanny copies of (clockwise from above left) Balcony, Belvedere, Ascending & Descending, and Waterfall can be viewed at Lipson’s website. 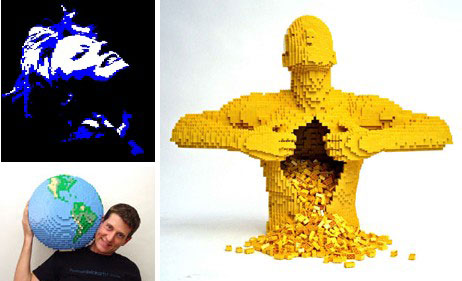 (image via: The Brick Artist)

LEGO has also been used to show that “art imitates life”, none more superlatively than by ex-lawyer turned Lego-er Nathan Sawaya. The now 34-year-old New Yorker has had his brickwork exhibited in reputable galleries and art museums – some of his creations have sold in the 5-figure range. 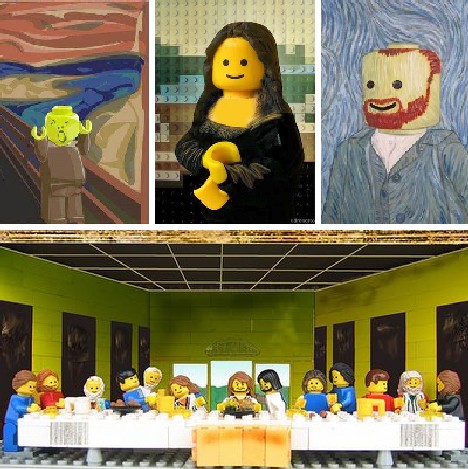 (image via: Lego Is Fun)

Lego art can also imitate fine art, though the original artists Munch, Da Vinci and Van Gogh might not agree. Then again, they’re not around to take issue. 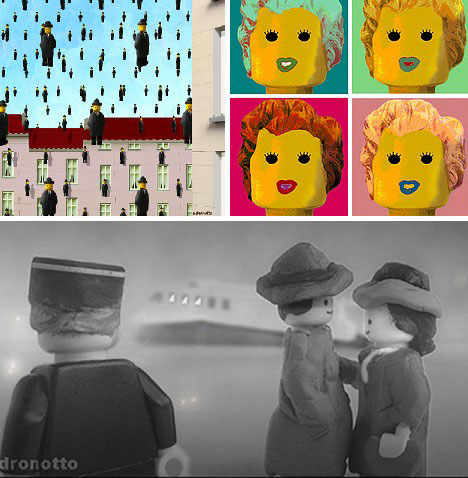 Modern art as well, has inspired its share of imitation in LEGO bricks. The above montage showcases LEGO surrealist art by Rene Magritte and Andy Warhol’s iconic Marilyn Monroe quartet, and beneath them the climactic final scene of the 1942 film Casablanca. 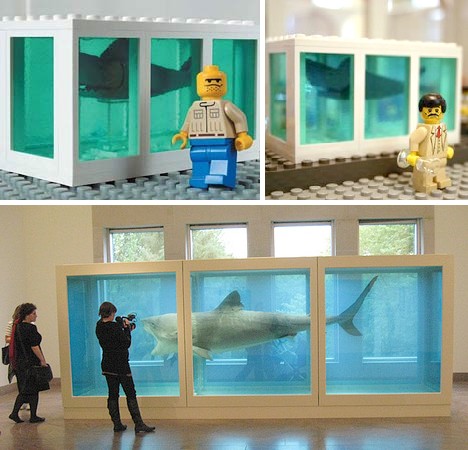 (image via: The Little Artists)

An outstanding – if not outrageous – example of modern art is British artists Damien Hirst’s “The Physical Impossibility of Death in the Mind of Someone Living”. Created in 1991 and featuring a 14-foot long tiger shark sealed in a glass-walled tank of formaldehyde preservative, Hirst’s best known work recently sold at auction for approximately $15 million. It was also reproduced in LEGO by art cooperative The Little Artists, shown in two views just above Hirst’s original. 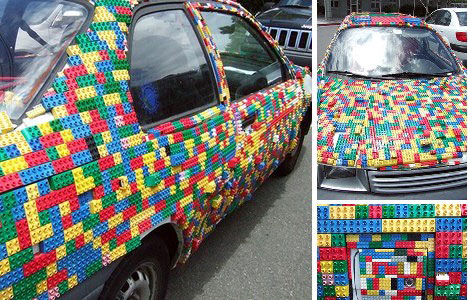 More in the category of Folk Art is the well-worn LEGO Art Car, captured for posterity above by Paula Wirth and Art Car Central. Constructing an actual working car from LEGO bricks and pieces is a major undertaking, so with a little glue and a whole, er, carload of Lego bricks one can create a reasonable facsimile. Trouble finding your car in a crowded mall parking lot? Problem solved! 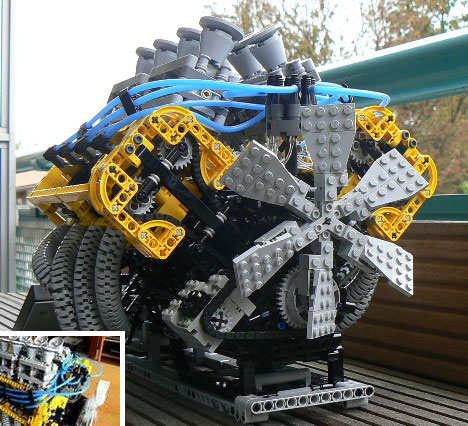 Pop the hood on the brick-encrusted sedan and undoubtedly there’s a tired 4-banger wheezing away. What SHOULD be there is this painstakingly precise Lego V8 engine built over a 4-month period by someone who’s either incredibly obsessed or not gainfully employed – or both! Check out the engine in action:

The fine detail of this interminable construction engine and its many moving parts that include a spinning fan and rotating crankshaft adds fuel to the fire of those who ask, “Is there anything that you can’t make with LEGOs?” 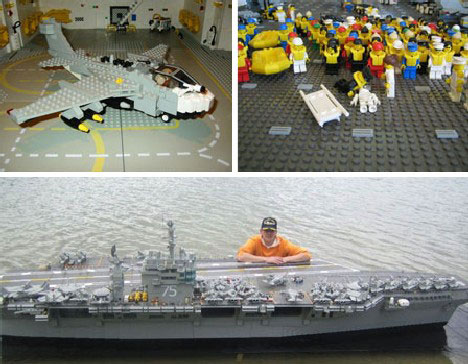 The answer to that question is, of course, “NO!!”… provided one has enough Lego bricks to get the job done. In the case of this truly amazing LEGO aircraft carrier, that would be about 300,000. This scale model of the USS Harry S Truman aircraft carrier is accurate down to the sailors’ lifebelts and tips the scales at a whopping 353 pounds! Crafted with the utmost care by Malle Hawking of landlocked Munich, Germany, the 14.7 foot long Lego leviathan is the world’s largest Lego ship… cool that someone seems to be keeping track! 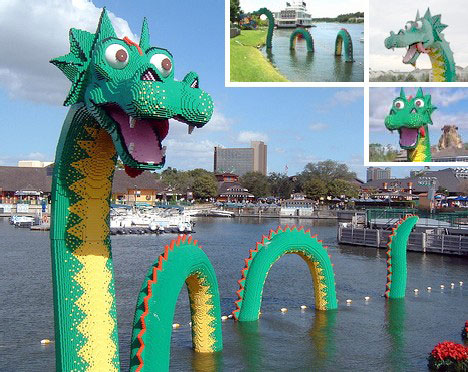 As awesome as the Lego aircraft carrier is, we wouldn’t want to see it take on Brickley, the Lego sea monster at Downtown Disney in Walt Disney World… wait a minute, yes we would! Brickley is made out of 170,000 LEGO bricks and stretches a sinuous 30 feet long. He calls the Lego Imagination center his home, and really, who’s going to argue with him? 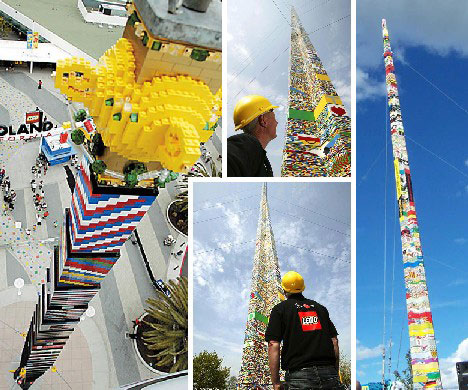 As long as the theme is quantity, check out this 94-foot tall LEGO tower at – where else – Legoland in California. It took an unbelievable 465,000 Lego bricks to complete this awesome stack-o-plastic, which should make an unbelievable mess once a gust of wind blows it down. 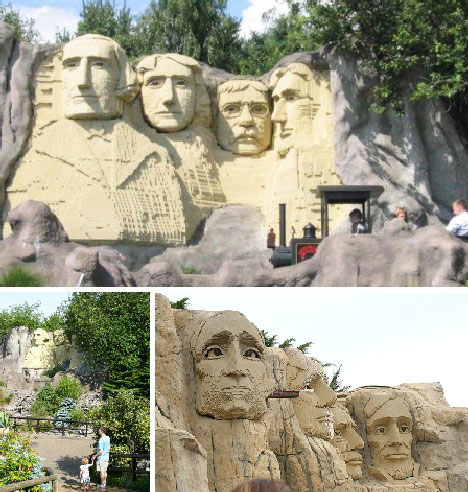 Monumental describes many of the exhibits at California’s LegoLand, such as the presidential figures from Mount Rushmore reproduced in LEGO bricks. 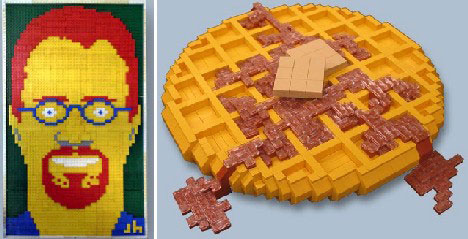 From quantity to quality. Jeffrey Hunter specializes in Lego art and his creations range from wacky to whimsical – even including a LEGO self-portrait (above left). Hunter’s sense of humor is prominently displayed in the “Leggo My Lego Eggo!” waffle (right) 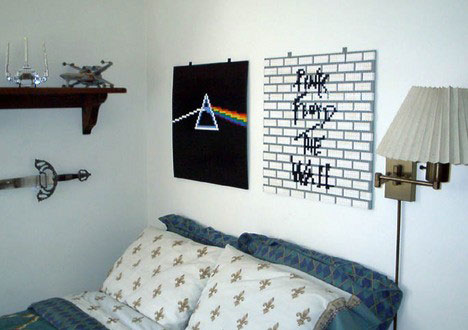 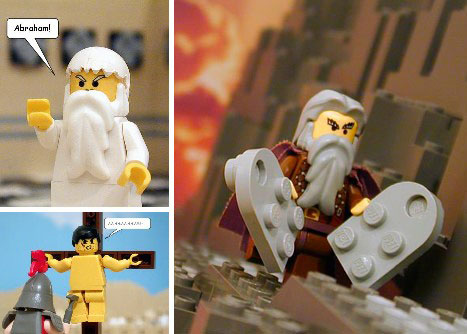 (image via: The Brick Testament)

Sunday School might be a lot more enjoyable if kids learned their bible stories through The Brick Testament, clever re-tellings of the psalms in polystyrene.

More from The Brick Testament, whose creators have obviously spent a LOT of time preparing a wide variety of biblical scenes including that all-time favorite, the Original Sin starring Adam, Eve and an uncredited snake in a rare speaking role. 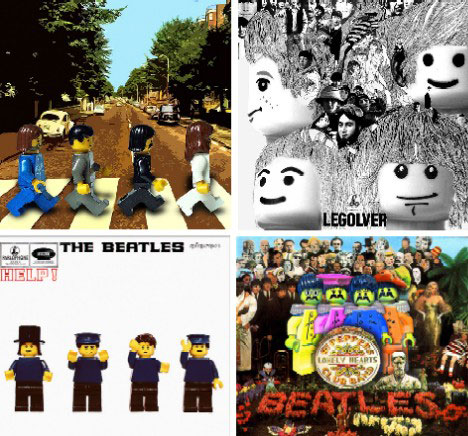 (image via: The Bootlego Beatles)

Taking on organized religion is pretty big, even for LEGO. In closing then, it’s only appropriate to segue to the seminal 1960s band said by one of their members to be “bigger than Jesus”. It is, or course, The Beatles, and their classic album covers have now been reproduced in Lego under the funny, punny title of The Bootlego Beatles. Can’t buy me love? Just put it on plastic!