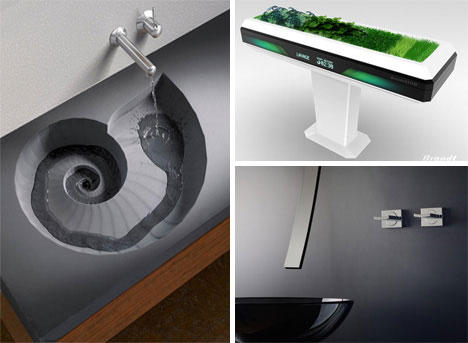 What could be more basic and functionally unchanging as a sink? To demonstrate the danger in this assumption, here is a look at how sink designers are abandoning the generic, water-intensive styles of old in favor of new designs heavily influenced by the natural world, technological innovation and the desire to conserve water. Here are 16 designs that certainly create a splash (sorry, had to be done). 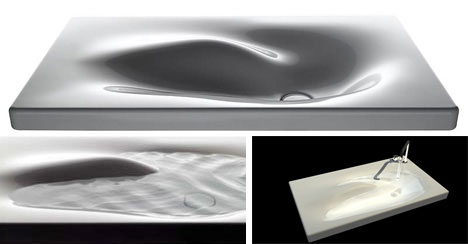 Gone are the days when sinks were ruled by right angles and flat surfaces. Today it’s a more natural, water-weathered look that designers seek to evoke. The surface of the Kanera E 1 itself looks liquid, a scoop of modern material (ceramic) that holds water just like a seaside rock pool – and thankfully deep enough under the faucet to prevent any tidal surprises. 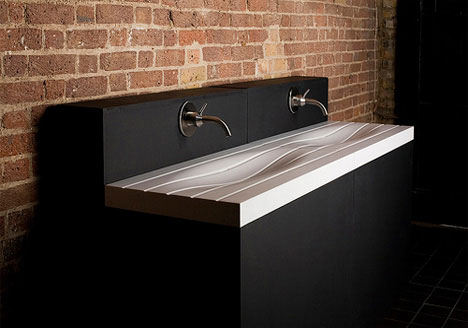 The Follo also goes for shallow-curve basins (perhaps in this case a little too shallow) and an aesthetic that looks like a cross between painted planking and upholstery. This design has only recently been unveiled by designer Will MacCormac so details are sketchy – will be interesting to see how it actually functions. 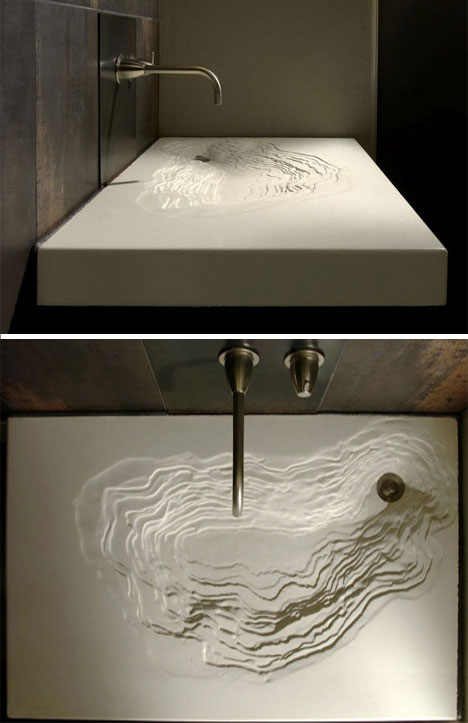 What happens when water erodes a softer, more porous material? Gore Design Co. have evidently been studying this intently, as their eye-catching concrete Erosion sinks demonstrate. As with the previous two sinks, there is an ecological message at work: “you do not need to use so much water”. The terraced sides of this bowl will fill up in no time. 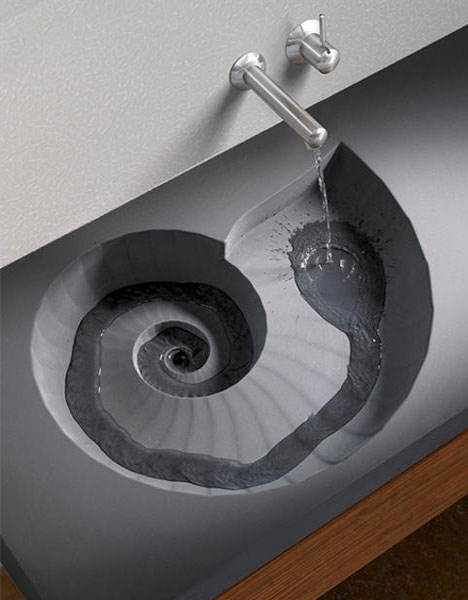 Taking inspiration more directly from Nature (and thumbing its nose at the myth of the manifest Coriolis effect) is the Ammonite Sink, named after the extinct marine animals that have left such bewitching fossils for us along the shorelines of the world.  It is again fashioned from concrete to a variety of widths, and will give you hours of fun chasing dropped bars of soap out of its depths. 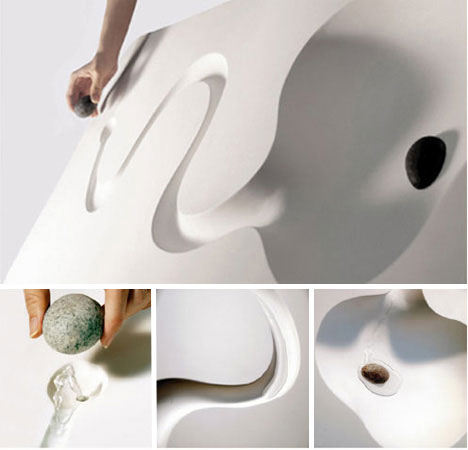 (Images via: Nothing Design Group)

Where the previous sinks took inspiration from the effect of falling water on stone, the Origin Sink is more interested in the river itself. Lift a stone and the source gushes out and winds its way down to the end of its journey, a plughole capped by another stone. Sidestepping queries about just how snug-fitting those stones will have to be, it’s a relaxing change from the roaring torrent of most sink designs.

It’s a magic trick within a sink. Where does the water go? Wave your hand underneath to demonstrate the lack of plughole – but don’t let baffled onlookers too close, or they might see the water draining away horizontally into the wall. The “Horizontal Integrated Siphon” system is a neat and stylish way to hide the plumbing and put a sink into the narrowest of spaces.  (And it’s a great party trick). 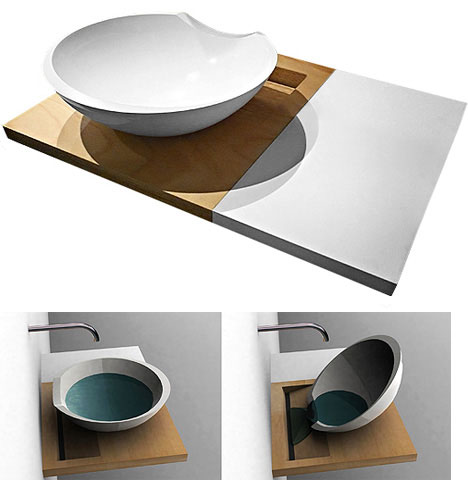 Thinking along the same lines is designer Maja Ganszyniec with the Plugless Sink. Once you’ve finished with your bowl of collected water, tip it backwards into the spillway and you’re ready to go again. It is designed to force to to dispose of the water yourself, and thus gain an appreciate of how much you’re sending down the drain, along with a distinctive modern-yet-retro vibe. 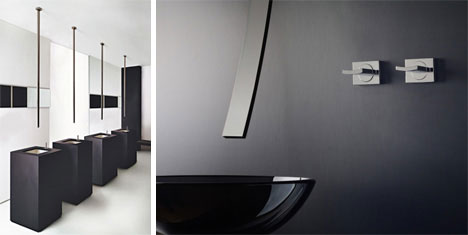 (Images via: Gessi and Graff)

There’s no mistaking these sinks as anything but modern. With the impressively severe-looking Rettanglo sinks, gravity does all the work as water is delivered vertically from the ceiling (at, we would hope, a sensible pressure). Bending this concept a little is the Graff Luna basin, a three foot long faucet like a sword or the rib of a ship, delivering water into a bowl. The only forseeable problem is explaining to guests what it really is before they experimentally try to tug it off the wall. 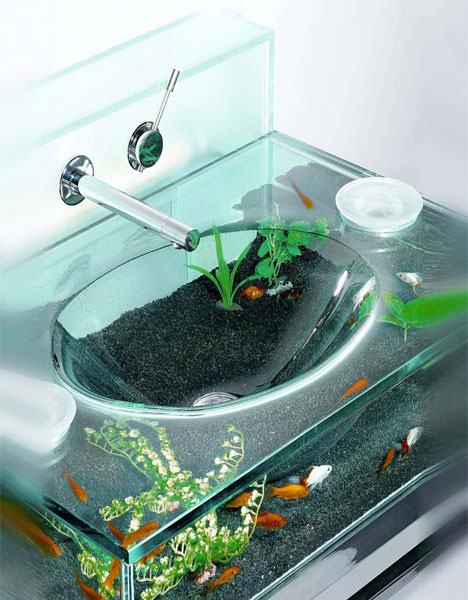 The cutting-edge modern sink isn’t content to just deliver hot and cold running water. Take the Moody Aquarium Sink from Italbrass. It’s all the rewarding work of a fully-functional fishtank, coupled with the decidely odd sensation of washing your hands in it. The soap dishes on either side of the watertight main basin conceal entrances into the tank, allowing feeding and maintenance, and the whole structure is mounted on an integrated chrome finish brass stand. What do the fish make of it all? 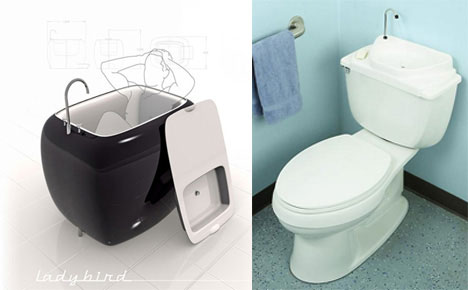 (Images via: Coco Reynolds and Gaiam.

If space is at a premium in your house and you are keen to double up on your appliance functionality, the Ladybird and the Toilet Sink should catch your eye. The former has a detachable top that converts it into a cosy bathtub – certainly not one to stretch out in, but a gem of space-saving economy. The latter uses the clean water that rushes into your commode with every flush, diverting some of it through a faucet in the top and saving the need for a separately-plumbed tap. A thumbs-up for water economy, and perfectly hygienic. 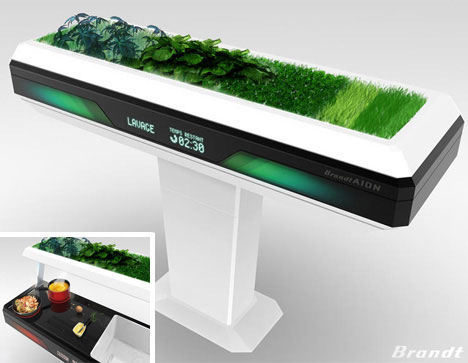 Finally, some sinks that aim to prove that electronic technology has a place next to running water. The dazzling and ambitious Brandt Aion is a garden that washes your dishes. Open it up and use the cooking and draining surfaces, and when you are ready, shut it down and an automatic dish washing cycle will start (digitally indicated on the front of the unit), using vegetable soap that is created by the plants in the lid. Meanwhile, those same plants help scrub the air in your kitchen. Truly ahead of its time.

(Images via: WET and Gizmodo)

Washing your hands at the Meltdown sink is a treat for the senses. As the water runs, internal speakers play soothing music (perhaps something by Wet Wet Wet?) and the body lights up, projecting images onto the underneath of its recyclable Polyethylene surface. If you are so impressed by this light and sound display that you lose track of time, you may want to fit an iSave Faucet Counter – it monitors and displays the amount of water running away. As with all the sinks featured, it’s there to make you rethink something as simple as washing your hands.