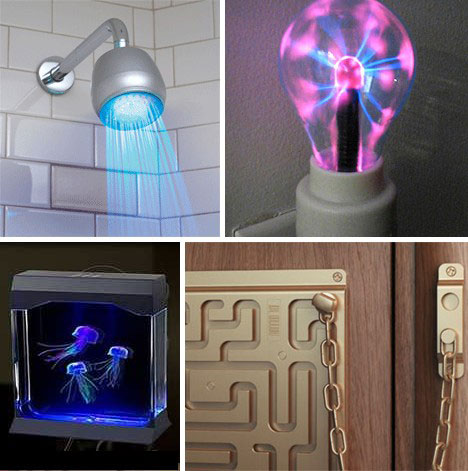 Geeks spend a lot of time at home and often apply their peculiar preferences to the fixtures and fittings. These 15 geeky home gadgets and accessories offer a sampling of what your stereotypical basement dweller can do once they turn off Home Improvement and actually go about doing it. 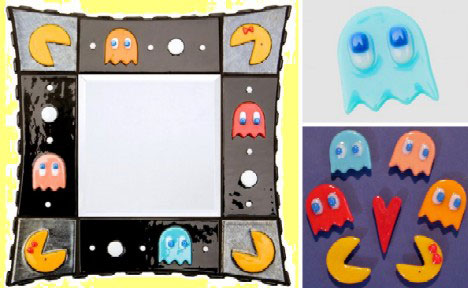 Here’s lookin’ at you, kid! This beautiful Pac-Man fused glass mirror is an excellent reflection of your geek status. Made of colorful fused glass by artiste/entrepreneur Jamie Burress, the central mirror measures 5-inches square and is surrounded by Pac-man, Ms. Pac-Man (beauty mark and all), and ghosts Inky, Blinky, Pinky and Clyde. Burress also offers Pac-Man fused glass fridge magnets in a set that includes a red heart. 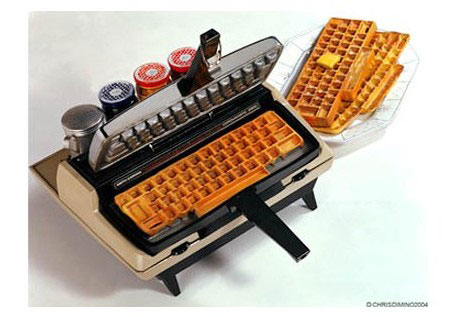 Using a Pac-Man magnet to stick a Star Trek convention notice to the fridge door is one way to work up an appetite, and what better to eat than a keyboard waffle. Although (unfortunately) a one-off concept, the Corona-Matic Waffle Keyboard Maker looks production-ready to the point of featuring a handy rear shelf to store syrup and condiments. Chris Dimino worked up the waffle maker as a way to re-purpose obsolete technology – and former ubiquitous electric typewriters are as obsolete as they come. 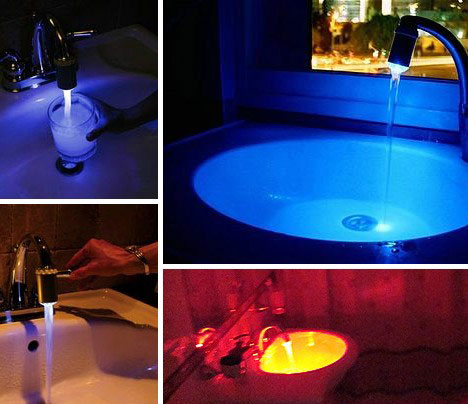 Staying in the kitchen, this handy faucet attachment makes your tap water appear to glow. It’s the perfect way to freak out a geek room-mate formerly from Chernobyl. On the practical side, the LED lights in the deluxe version shine “warp core blue” until the water temperature reaches 89 degrees, at which point they turn radioactive red. Now that’s hot! 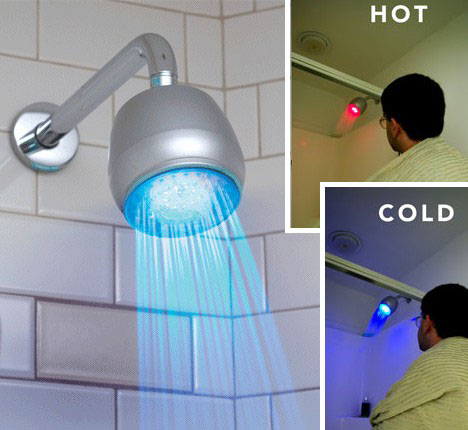 The same company also makes a shower LED light that works on the same principle, though it’s unlikely anyone except a masochist would view that vivid blue lighting from within the chilled spray. Unless of course, somebody should flush the toilet beside a showering geek, thereby inducing a memorable light AND sound show. 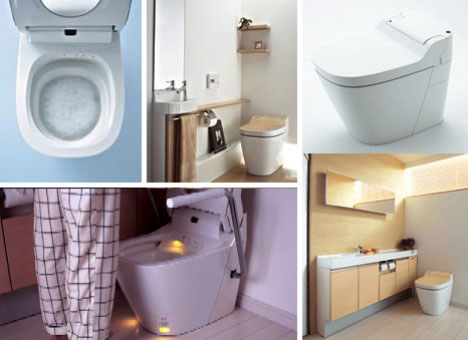 Geeks are smart, or so the story goes, and it’s a rare geek that lets him- or herself fall for that old toilet-flush-in-the-shower gag. The Matsushita Alauno high-tech toilet is the smart geek’s choice. Tankless but by no means thankless, the Alauno was designed to be as low maintenance as possible: an organic glass bowl liner and a “Gekiochi Bubble” cleansing method negates the need for scrubbing for as long as 3 months. Other thoughtful features of the Alauno include LED lighting and a built-in speaker – presumably to play sweet sounds, not amplify them. 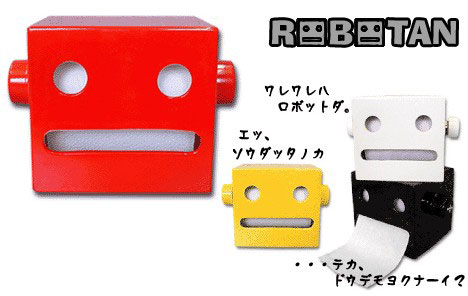 No geek bathroom experience is complete without an Airyusha Robotan Toilet Paper Holder to dispense the Charmin – through its mouth. The Airyusha may be pricey at $50 a poop, er, pop, but the geek lifestyle demands your TP be offered through the mouth of a red, black, yellow or white ceramic robot head. Besides, a roll of 100% environmentally friendly recycled paper is included and that stuff doesn’t grow on trees. 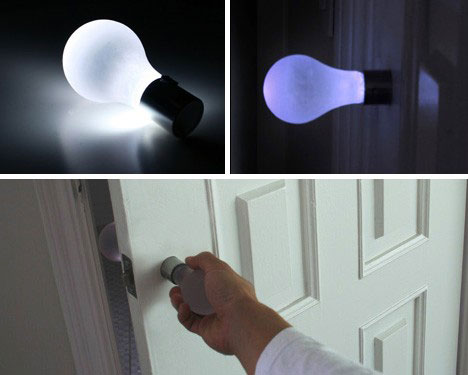 Getting to the WC in the first place can be an adventure in itself, especially if one must traverse a minefield of discarded pizza boxes, assorted remote controls and overflowing ashtrays to get there. The Knob Light makes everything easier. Powered by an internal energy-storing generator, Jeong-Sun Park’s concept eliminates fumbling for entry when urgency is a priority. 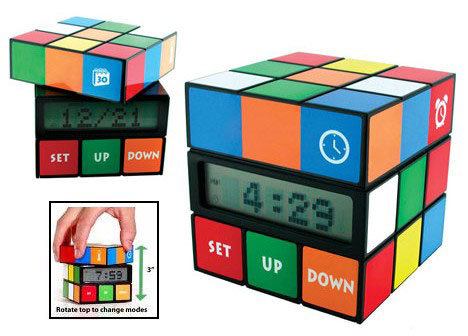 From the bathroom to the bedroom where the Cube Clock controls the rhythm of every good geek’s weekday. Twisting the top row of the 3-inch square clock allows you to read the time, temperature, alarm or date respectively. Here’s a video of the iconic alarm clock in action: 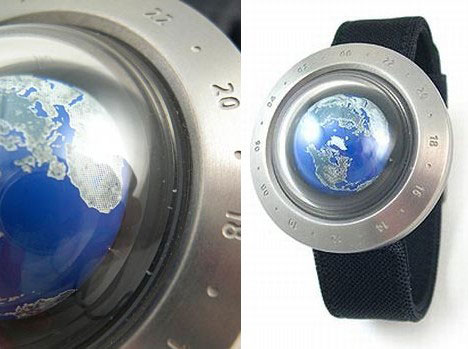 (image via: The Greenhead)

Telling time on the go means wearing a wristwatch, and few are more geeky than the Titanium cased Rotating Earth Watch. Its $500 price makes it a luxury but it’s made by Seiko so it should last an eon, give or take a few eras. Just remember to change the (Di)Lithium battery every decade. Not available in Alderan or Magic 8 Ball versions, sorry. 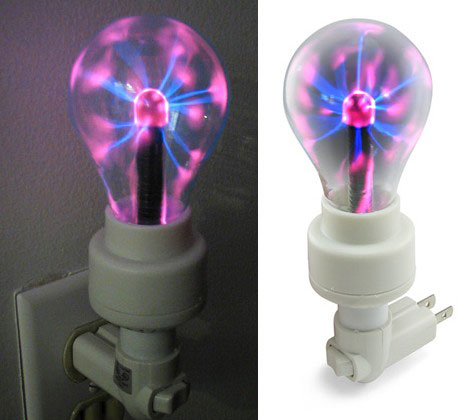 Think “geek” and you might think “night light”, but not just any nightlight… this very special one from Think Geek. It’s a plasma bulb nightlight! Yes, they do make them this small and the bulbs last for years while using very little power and emitting very little heat, like the core of an ancient white dwarf. Easing into dreamland via cold plasmatic photons pretty much guarantees instant uber-geekdom. With that said, there’s one other thing every geek wants in his bedroom. No, not that, this. 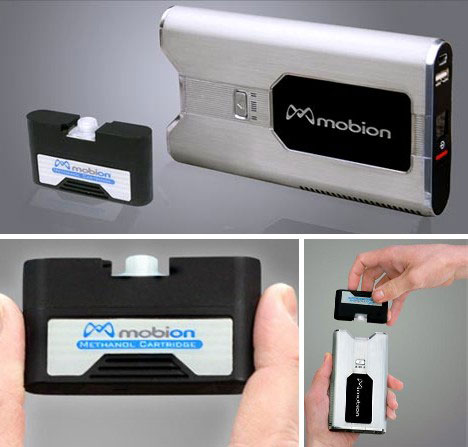 Moving on, geeks are gaga for gadgets and gadgets, unfortunately, have a way of using electricity that can put a drain on portable power sources. MTI Micro Mobion has found a solution as futuristic as the company’s name: the Fuel Cell Gadget Charger. Each removable fuel cell cartridge provides up to 25 hours of power before needing to be replaced. Not quite perfect, but imagine the looks on your nerdy friends’ faces when you whip out MTI Micro Mobion’s marvel. 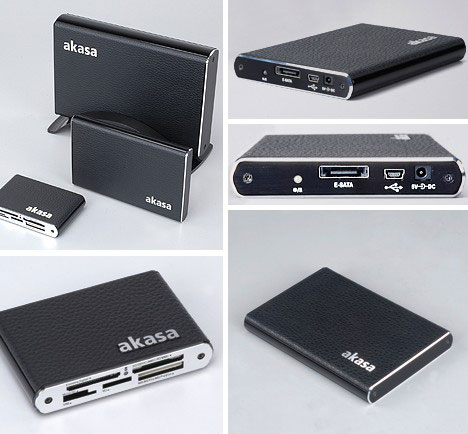 While computer bits & bites are what geeks love the most, they definitely deserve a dedicated article of their own. With that said, this series of leather-wrapped HDD enclosures and card reader deserves special mention. Made by Akasa to answer a need no nerd has yet expressed, the 3 items are wrapped in a “soft leather finish which is further complimented by an aluminum body with brushed aluminum fascia panels and polished edges.” 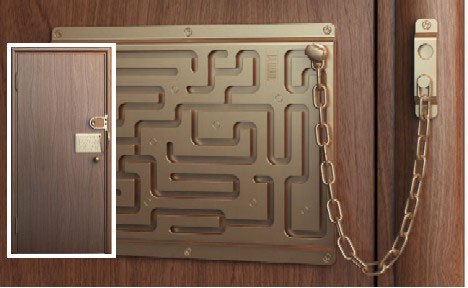 If anyone knows security, it’s a geek… and that goes for home security too. Frustrate home invaders, Girl Guides and pizza delivery boys with the Defendius door chain. It even sounds like a video game! Designed by Art Lebedev on what must have been an especially slow day, the brassy device takes the classic door chain to a new level… of paranoia. 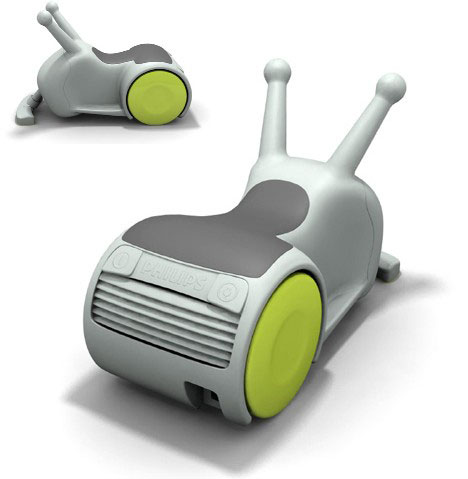 Safe inside their humble abodes, keeping it clean can become a geekish obsession. That’s when this cute riding vacuum cleaner comes into play. Looking like the unlikely love child of a John Deere tractor and a garden snail that got in the way, Kristina Andersson‘s funky design exercise definitely doesn’t suck. 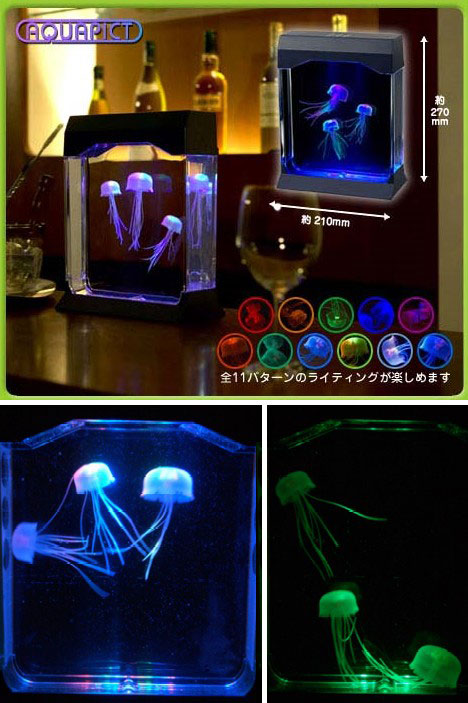 Why do some geeks religiously tend to their virtual pets’ every need while the aquarium makes the Gulf of Mexico’s dead zone look like the best of Jacques Cousteau? The solution is the Aquapict LED Jellyfish Aquarium from Banpresto. See it here, backed by a cheesy yet hypnotic soundtrack:

A trio of gently undulating silicone faux jellyfish reside within the Aquapict‘s clear acrylic confines, lit by any one of 11 color settings. They neither eat, sleep or need to be cleaned… in other words, the perfect low-maintenance gel friends.

Imagine a home decked out in all the above geeky gadgets, fixtures and fittings… since only a few are prototypes, it’s possible to make a geek dream home a reality. But do it soon – one geek’s dream is a geek’s wife’s nightmare!