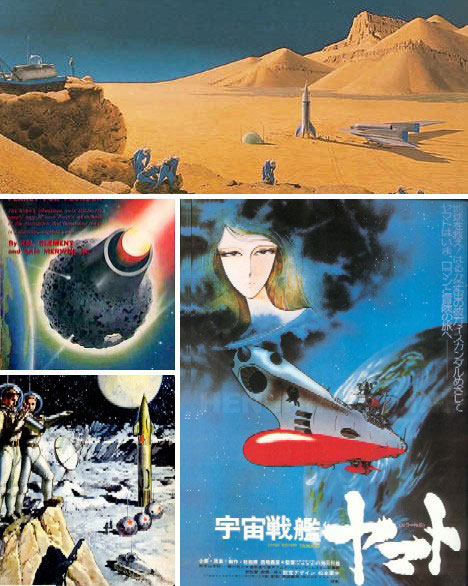 In the hopeful years following the Second World War, armed with new technologies and vivid imaginations, almost anything seemed possible to a society straining to break free from the cycle of earthly strife. Science fiction writers and visionary artists of the aborning Space Age applied their talents to picturing a grand future beyond the wild blue yonder. Some things they got right – others, not so much. These 15 examples highlight these visions of retrofuturistic space flight and the dreams of what could be including, of course, some classic babes in space. 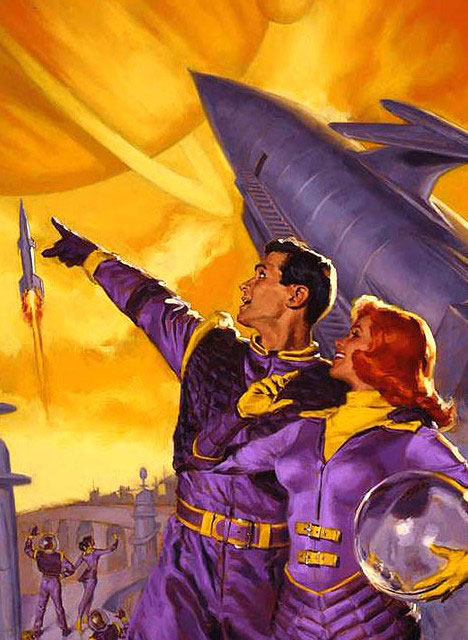 “Atomic Avenue #1” (above) by Glen Orbik captures the spirit of brash optimism that subsumes so much of retrofuturistic space vision. Having beaten the Great Depression and emerging triumphant from World War II, it seemed the only place to go was up.

Science Friction is the Depiction 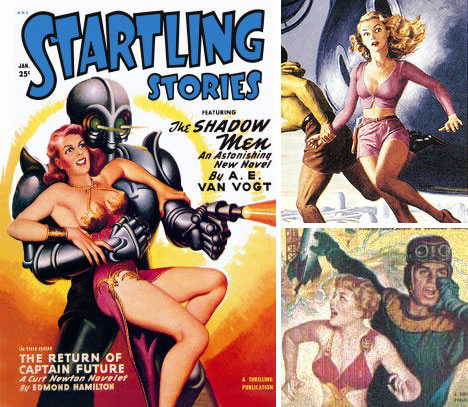 (images via: Futurphonic and TV Talkin)

Science fiction & fantasy magazines, the illustrated pulp fiction of the age, sparked the imaginations of a generation. One of the most daring was Startling Stories, which published 99 issues from 1939 through 1955. Peppering sci-fi with sex has always been the key to a young geek’s heart and Startling Stories did much to make space spicy. 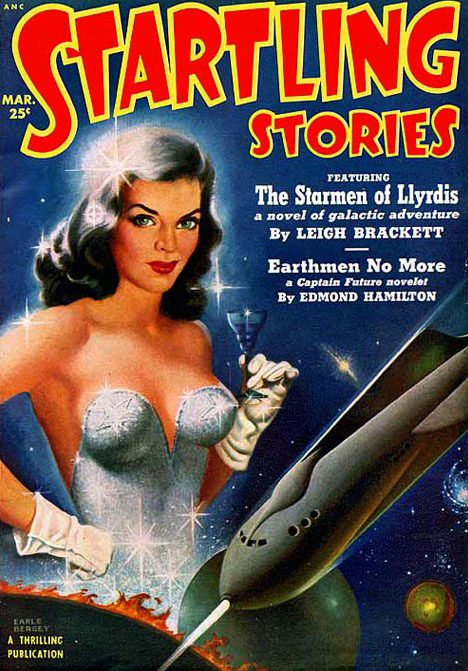 Censorship was rife in the red-scared Fifties and sci-fi gave artists justification for showing more skin than they could in other genres. With so many scantily clad futuristic females on display, one might assume the future was either wilder or warmer – maybe both! 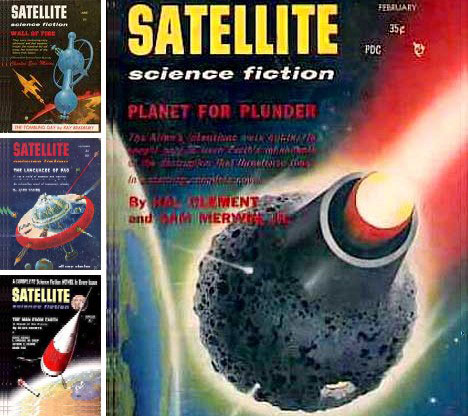 Satellite Science Fiction was another Golden Age sci-fi pulp magazine that leaned towards hard science illustrations for its covers. The large image above explores a tantalizing prospect: hollowing out asteroids to serve as gigantic spaceships. 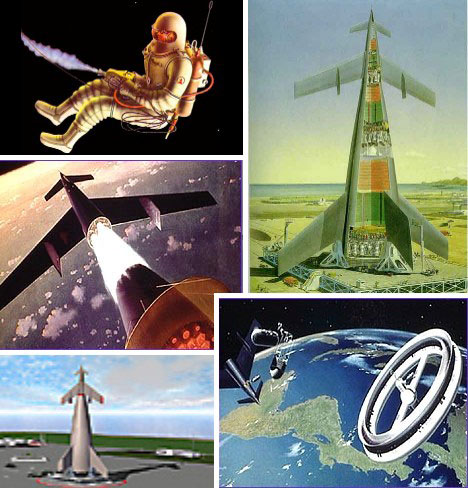 Collier’s magazine published a series of illustrated articles from 1952 to 1954 which described our supposed space-traveling future in brilliant technicolor. The combination of respected scientists such as Wernher von Braun, Willy Ley and Fred Whipple with dynamic illustrators including the amazing Chesley Bonestell was a potent mix. It is said that the Collier’s series was hugely influential, priming the public for NASA’s upcoming manned missions. 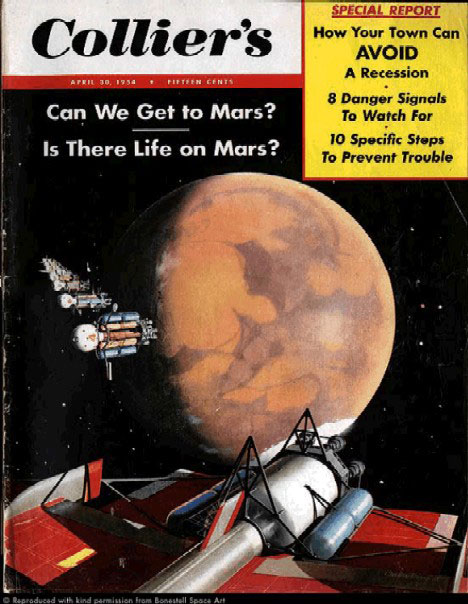 (image via: The Ugly Spaceship)

The Collier’s series proceeded logically from the building of an orbital space station, to a lunar landing and then a great leap forward to Mars. Ten space ships constructed in orbit using 950 ferry flights to supply the building materials would make the 2-year voyage to the Red Planet. Fifty men (sorry gals) would descend to the Martian surface, the spearhead of a mission to colonize the fourth planet from the sun! 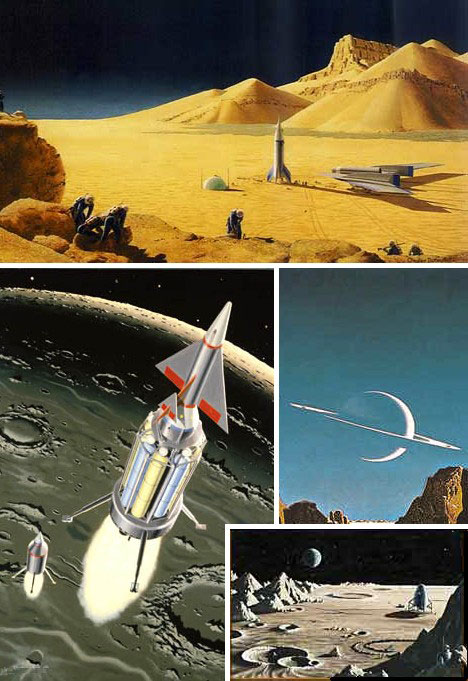 (images via: The Crotchety Old Fan and Hour 25 Online)

Chesley Bonestell lived for nearly a hundred years, from 1888 to 1986, but it seems his mind was centuries ahead. Perhaps the most famous science illustrator of the 20th century, Bonestell’s works portrayed a heroic new age of space exploration without resorting to wild exaggeration – or stunning space damsels. 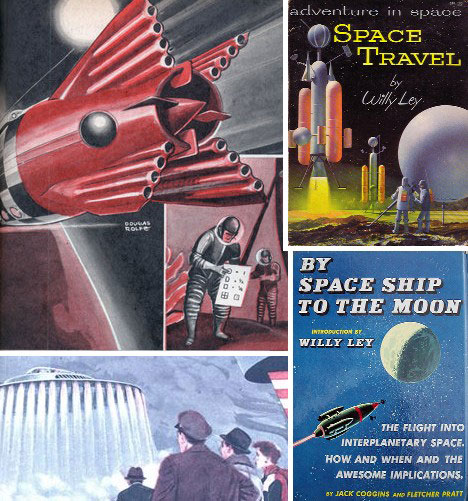 Willy Ley was the Carl Sagan of his day, tirelessly popularizing space exploration and bringing his vision to the public at large. Having left Nazi Germany for the USA in the mid-1930s, Ley spent much of the next three decades publishing a multitude of often lavishly illustrated magazine articles and books on what mankind’s future in space would be like.

Russian to a Brighter Future 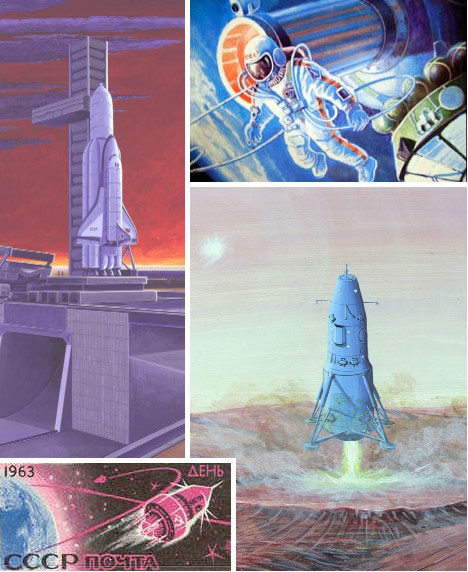 Soviet Russia: an intellectual wasteland characterized by crushing cold, drab colors and omnipresent fear… or was it? The former USSR had its problems but its space program was second to, well, ours. 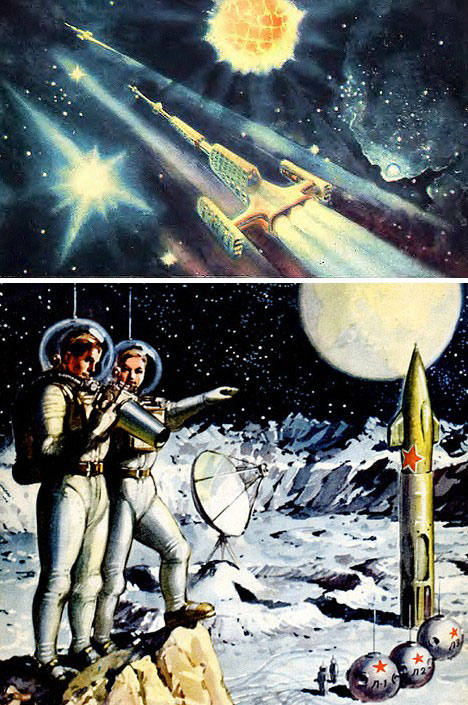 It may seem strange that the CCCP’s rigid, Stalinist society permitted its citizens freedom of imagination, but popular space magazines such as TM (Teknika Molodezhi) were in fact allowed to publish scenes of planetary exploration under the stars… red stars, of course.

The Sky is Blue, The East is Red 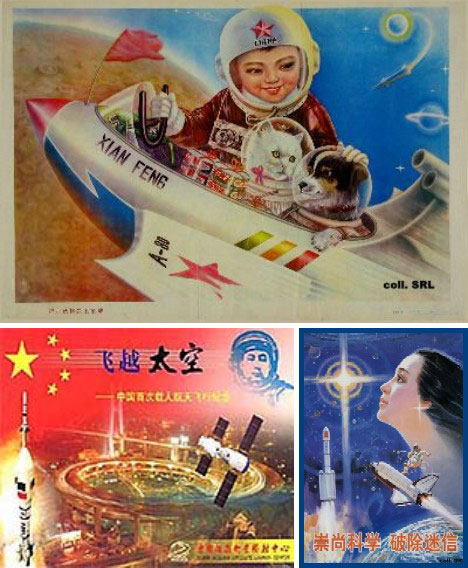 China is a major player in today’s space race and the land that invented gunpowder, fireworks and rockets has always had its eyes fixed upwards. Chinese space art is predictive of reality while retaining a certain charm, as can be seen in the images above. 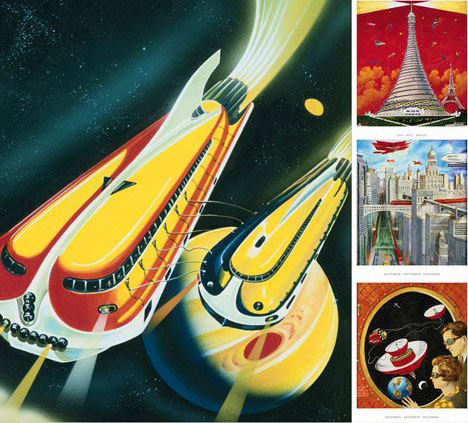 Retro-futurism is more than just preserved pie in the sky, it’s a genre with more than a few devoted advocates across the globe. Enough to have a calendar even. The 2009 Visions From The Past “kalender” provides plenty of fuel for one’s retro rockets.

Rising from the Ashes 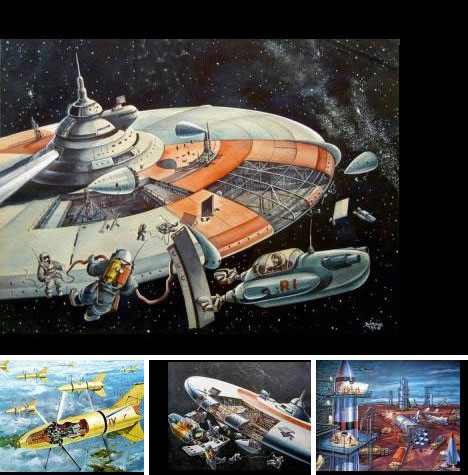 Klaus Bürgle, one of Germany’s premier science fiction artists, gave his shell-shocked nation new hope for a better future through his energetic compositions. “Raumstation I”, above, dates from 1949 and illustrates Bürgle’s honed scientific mind at its keenest. 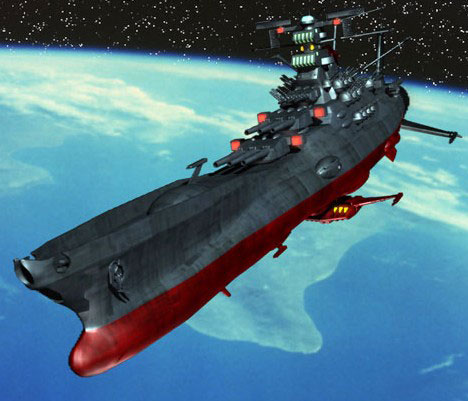 Japan also emerged from the war with a forward-looking point of view, though you might not think so watching Space Battleship Yamato. Re-dubbed for English-speaking audiences as Starblazers, the vintage 1970s show features classic Japanese animation and the somewhat disturbing vision of Japan’s sunken WWII battle-wagon restored, re-floated and reborn as an intergalactic peacekeeper. 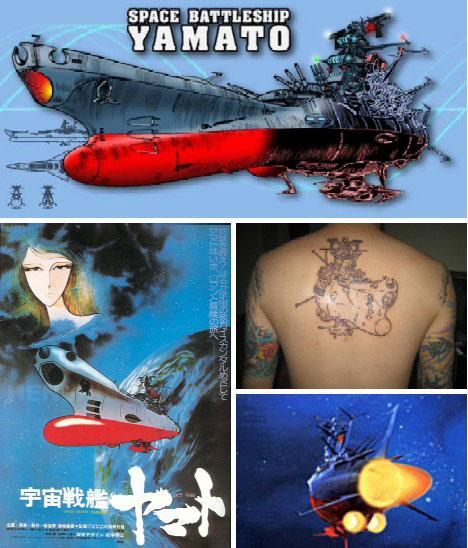 The real Yamato was, along with its sister ship the Musashi, the largest battleship ever built. Weighing 70,000 tons, the Yamato was fitted with nine 18-inch guns that could lob an explosive shell 25 miles. The ship looked much the same in its anime reincarnation as Space Battleship Yamato, except for the flying through space part. As seen above, some dude loves the show so much he had the ship tattooed on his back! 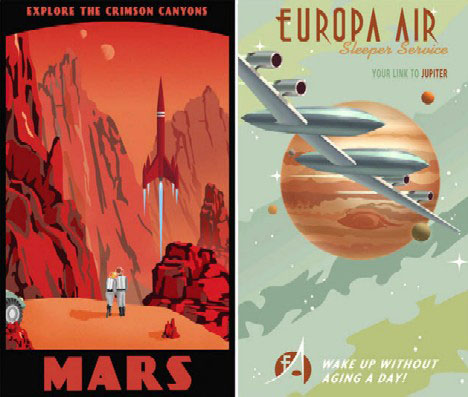 There’s a certain comfort, perhaps borne from familiarity in these retrofuturistic depictions. It may be that when confronted with The Great Unknown that is outer space and the uncertain prospects lurking on planets other than our own, the human mind grasps for something, anything it can use to put the whole experience into perspective. Cold comfort to be sure, cool it shall be!