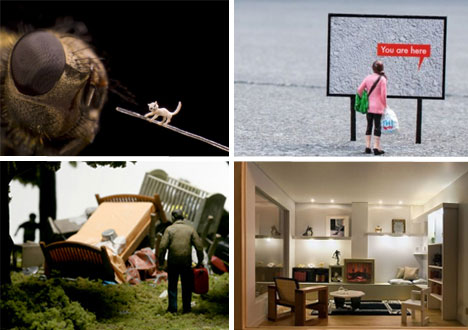 There’s something sort of magical about miniatures, especially when they’re strikingly lifelike. The artists who create these tiny wonders look at life from a different scale than the rest of us, and their work often requires intense patience, concentration and a steady hand. From sculptures too small to be seen by the naked eye to sweaters knitted with needles the diameter of a human hair, here are 10 incredible works of amazingly tiny art. 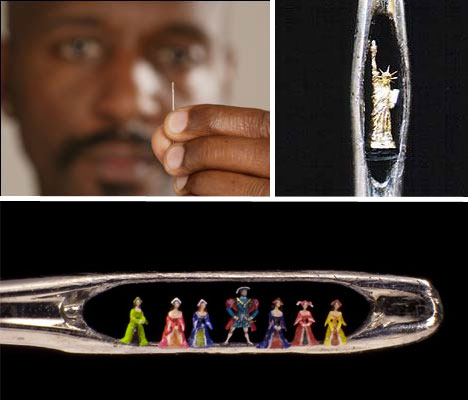 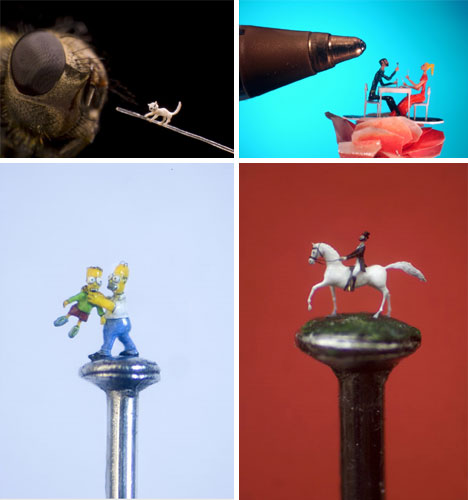 How is it possibly to create such intricately detailed, finely sculpted art – on the head of a pin? Willard Wigan’s works of art are so minuscule, they can’t be seen by the naked eye. Wigan uses a hair plucked from a dead fly (no, really) to paint his figures, and says that he must enter a meditative state in which his heart rate slows in order to avoid hand tremors while sculpting. He has to work late at night to avoid disturbances from outside noises. 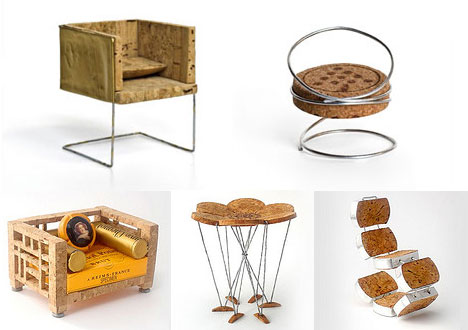 A Design Within Reach contest invited readers to create a miniature chair using nothing but the foil, label, cage and cork from no more than two champagne bottles. What resulted was an incredible collection of tiny furniture, some mimicking iconic designs while others were entirely original. 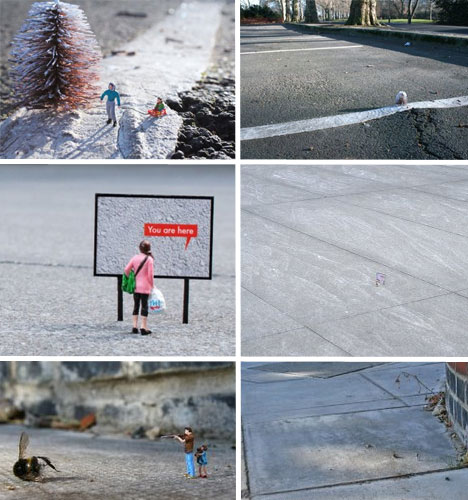 Would you notice a tiny figure on the street as you were passing by? A street artist calling himself ‘Slinkachu’ installed little hand-painted figurines in strategic locations throughout London, photographed them and left them to be observed or ignored by the public. The ‘Little People’ project emphasizes the loneliness and isolation that urbanites often feel despite being surrounded by others all the time. 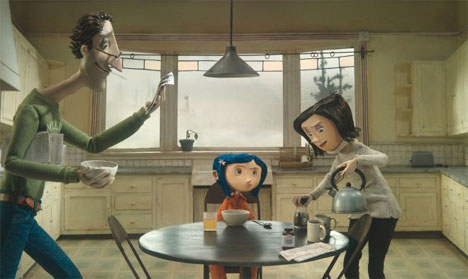 If you saw the movie Coraline, the stop-action animation feature based on the story by Neil Gaiman, did you give a moment’s thought to those tiny clothes and how they were created? Probably not, but once you think about it, the creation of such tiny garments is pretty amazing in itself. Miniature knitter Althea Crome uses tiny knitting needles to create these sweaters, which take her between six weeks and six months to complete.

Tiny Buildings Made of Paper 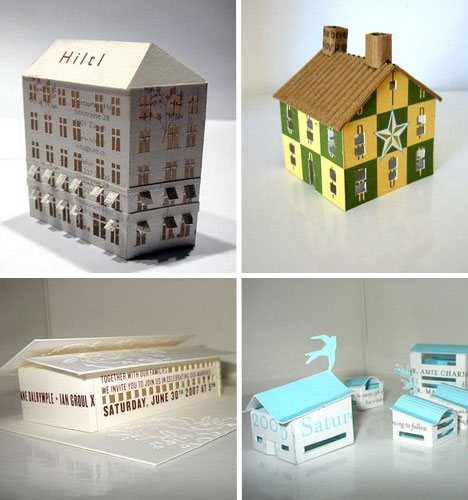 An artist named Sharon painstakingly crafts tiny replicas of full-sized buildings from business cards, packaging and other paper. Many of her business replicas are made from nothing but the establishment’s business card, and she also recreates wedding chapels using a copy of the wedding invitation. 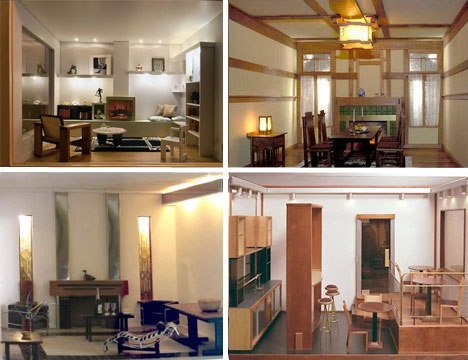 Looking at photographs of Peter Tucker’s work, you might just think they’re lovely examples of interior design. Look again. These are actually miniature interiors with working lights, tiny textiles and exceedingly small paintings hanging on the walls. Tucker, a former school psychologist, says there are certain disadvantages to his work looking so realistic – at least a dozen times, people have placed orders on his website thinking they were buying full-sized items. 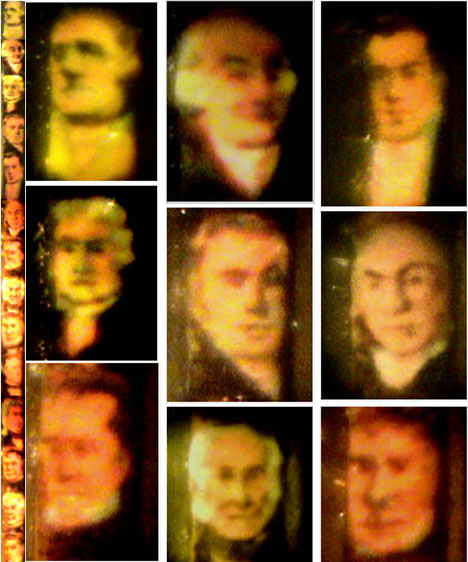 Jin Yin Hua created these portraits of 42 American presidents on a half-inch long strand of human hair. The images to the right of that of the hair have been magnified 1,000,000 times. The portraits were painted onto the strand of hair using a single rabbit hair, and the artist had to look through a microscope to see what he was doing. 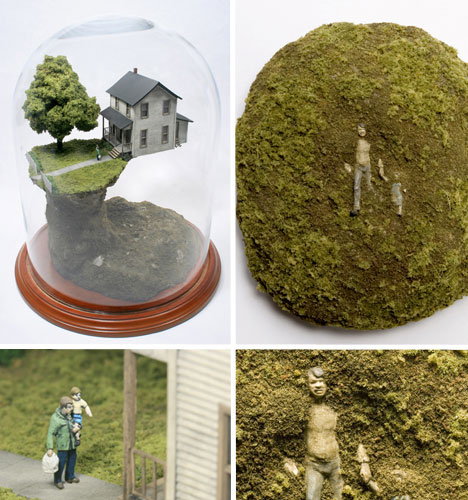 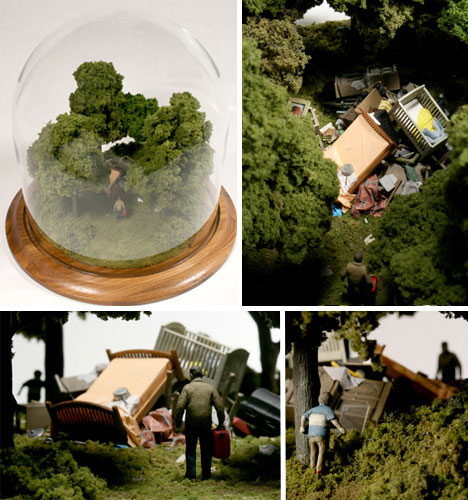 There’s a lot more to Thomas Doyle’s miniatures than you can see with just a casual glance. Often sealed under glass, Doyle’s rather unsettling works have a voyeuristic feel as you, the large-as-God observer, witness strange and frightening moments in the lives of others as their homes are destroyed, or some strange intruder lurks outside their windows. 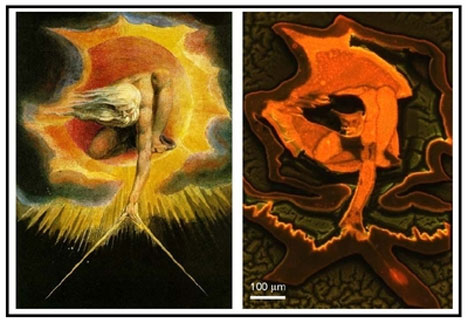 This microscopic reproduction of William Blake’s Ancient of Days was drawn on porous silicon with a helium bead and etched with hydrofluoric acid. Ee Jin Tao of the National University of Singapore created it for the 2007 Science as Art competition in San Francisco. 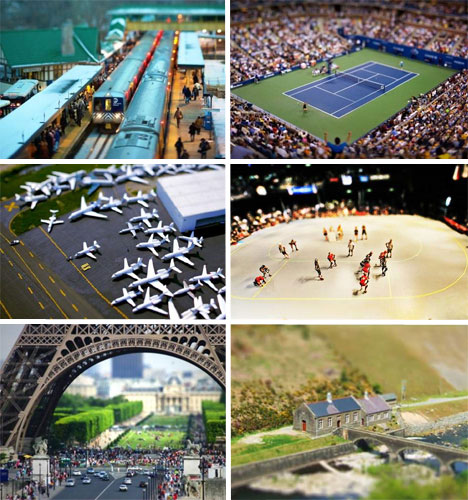 Wow, these are some amazingly realistic miniatures! Except that they aren’t miniatures at all. Each of these photos is of a real-life, full-size location or object – it’s been made to look like a miniature through the use of ‘tilt-shift photography’. The process involves using Photoshop to create a shallow depth of field and increased color saturation.