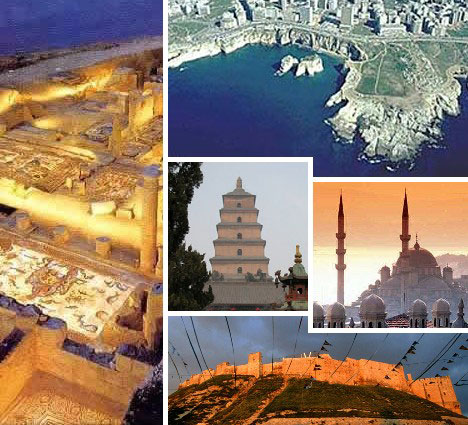 It takes a village… at first, at least. Whether that village grows into a city depends on many factors; whether it remains inhabited through centuries, even millennia, of war, natural disasters and environmental degradation is another thing altogether. Following up on our original post, here are ten more ancient, still-inhabited cities that have withstood the test of time. 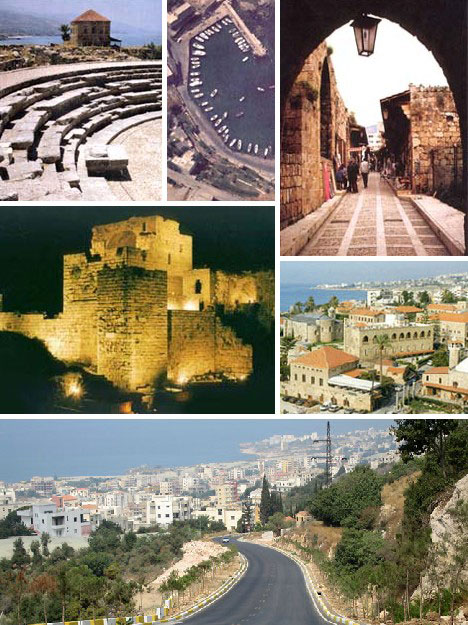 (images via: Middleeast.com, Saidon and LAU)

The city of Byblos, Lebanon has been a thriving urban center for at least 7,000 years but it really hit its stride around 3,200 years ago when it became an important player in the papyrus trade. In fact, the word “byblos” is Greek for “papyrus”, an early form of paper made from wetland plants that grew in Egypt’s Nile delta. From the word byblos we get the root word biblio, as in bibliogrphy. 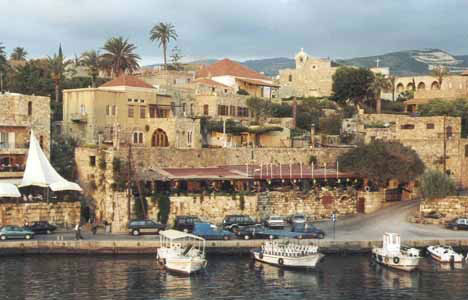 To the Phoenicians, master traders of the ancient world, Byblos went under the name of Gubla and later Gebal. Today its Arabic name is Jbeil and much of the city’s ancient and medieval glory is available for appreciation by natives and tourists alike. 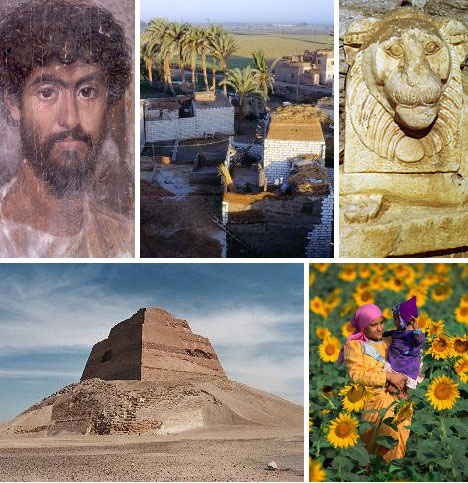 Cities first rose up out of Egypt’s Faiyum Depression nearly 6,000 years ago, nourished by the life-giving water which collected in the low oasis west of the river Nile. In the heyday of Pharaonic Egypt the city was known as Crocodilopolis, the leading center for the cult of the crocodile-god Sobek. In the Roman era, citizens of Faiyum used a distinctive painting technique known as encaustic. The pigmented wax used to paint the portraits of the dead on their coffin lids has withstood the passage of time to a remarkable degree, as can be seen in the lifelike portrait at above top left. 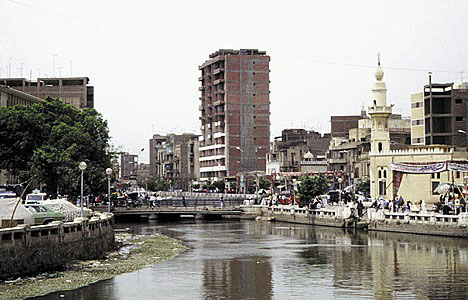 Faiyum today has a population of several hundred thousand and both it and the surrounding area are well watered by an effective system of canals first built around 1800 BC by the pharaoh Amenemhat I. Twelve massive waterwheels keep the flow steady and are a popular tourist attraction. 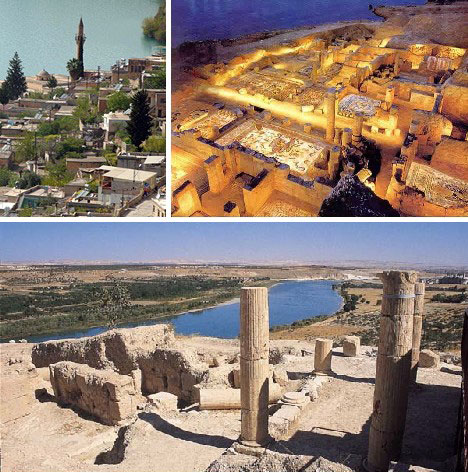 Gaziantep is the oldest inhabited city of Hittite origin – the Hittites were one of the great civilizations of the fertile crescent and jostled with Ancient Egypt for centuries. The Hittites were also the first to smelt and forge iron on a large scale, giving them a huge advantage over their rivals. Before the rise of the Hittites, however, Gaziantep was ruled by other civilizations including the ancient Akkadians approximately 5,000 years ago. 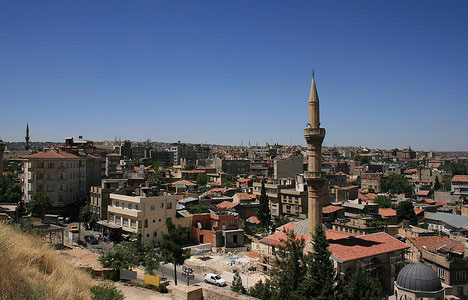 Gaziantep today is home to 1.5 million people and seems to be somewhat of an international real estate hotbed – wealthy foreigners have been swooping in, buying up old Turkish houses, and are restoring them for use as vacation homes. 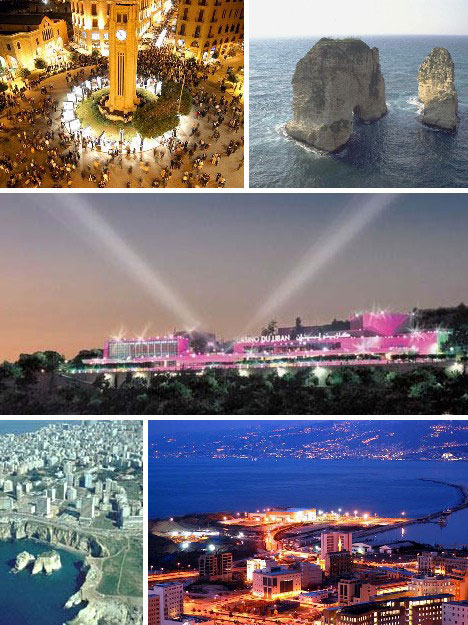 (images via: Habeeb and Orpheus Tours)

Beirut first entered the historical record in the 15th century BC, making the city at least 3,500 years old though archaeological finds have extended its timeline back an additional 1,500 years. Even the city’s name has remained remarkably consistent over the centuries – in ancient times it was known as Berytus. 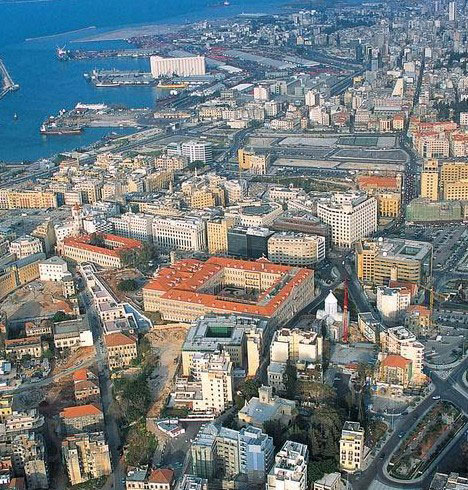 Today Beirut is the capital of Lebanon, a bustling cosmopolitan center with a population of just over 2 million. Its recent history has been as troubled as its ancient history… many residents can recall the sound of gunfire and bombs bursting in the Lebanese civil war and the Israeli invasion of Lebanon in 1982. 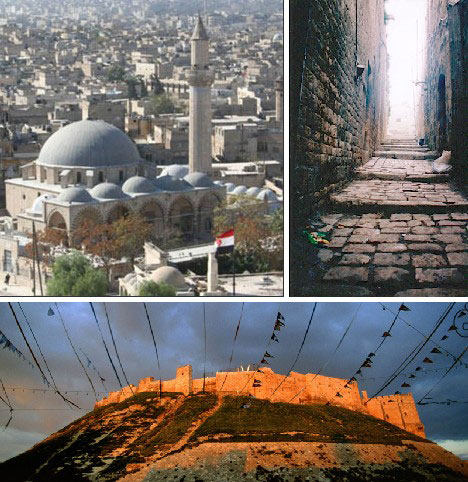 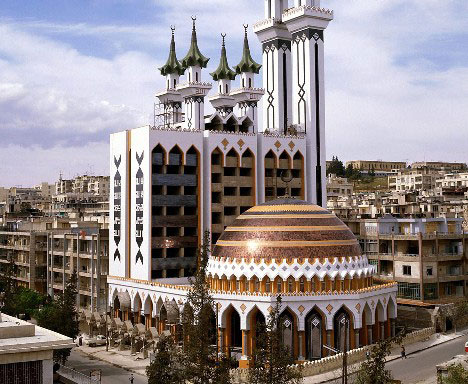 Situated at a strategic point between the Euphrates river and the Mediterranean Sea, Aleppo was prominent in the ancient world as a center of trade. Archaeological work has been difficult in Aleppo since the modern city sits directly atop a series ancient ones. Aleppo has had a tumultuous history in more ways than one. A deadly earthquake in the year 1138 AD killed as many as 230,000 people. The city had just begun to recover when it was conquered by the Mongols in 1260, 1280 and finally in 1400 by Tamerlane. 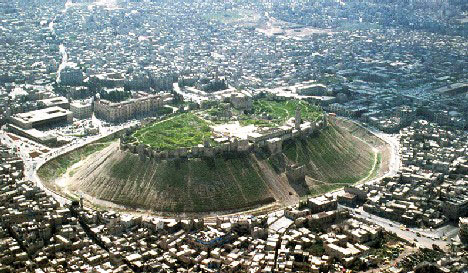 Modern Aleppo from the air is one of the world’s most striking cities – the 13th century AD moated central citadel rising 150 feet into the sky resembles a meteor crater in reverse. The area of the Citadel shows evidence of human occupation going back 7,000 years though ancient Aleppo gradually grew into what we consider to be a city. 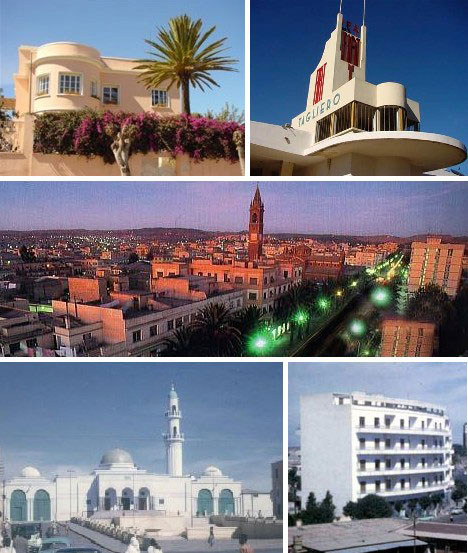 (images via: Intl Listings, City Of Sound and J Watson)

Though Asmara’s recorded history only goes by 700 years, recent excavations in the city’s suburbs have uncovered an extensive urban settlement dating back as much as 3,000 years. According to a BBC report on what city life in ancient Asmara would have been like, “The settlement’s inhabitants lived in stone houses, ate cows and goats, drank beer, farmed fertile land and wore animal skins.” The more things change, the more they stay the same! 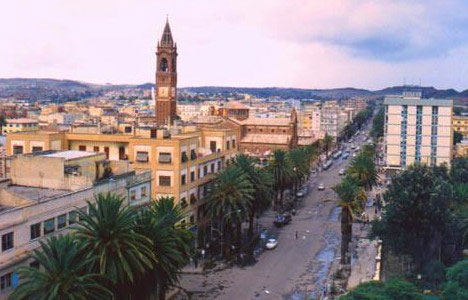 Asmara looks like a typical modern city today, thanks (or no thanks) to Italian occupiers who revamped the city to a European plan following its conquest by Italy in 1889. 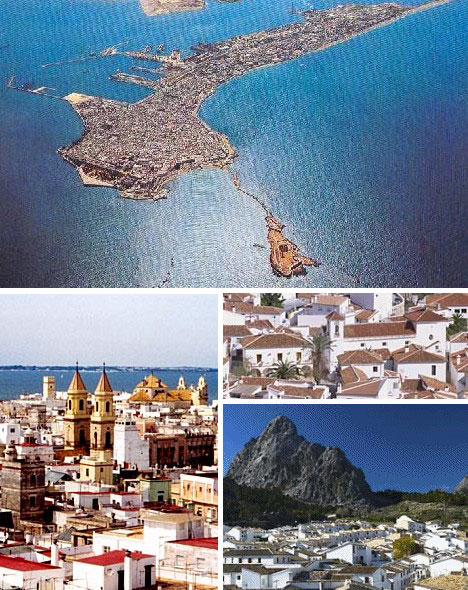 Gadir, Gades, Cadiz! That’s what a presumed sign on the immense city walls found 7 meters (roughly 21 feet) deep under Cadiz’ city center might read to, successively, Phoenician, Roman and Spanish visitors. Roman sources praised the beauty of Gades’ dancing girls but much earlier, like Lisbon, Gadir (meaning “The Fortress”) was a stopover for Phoenician ships plying the long tin route to and from the British Isles. 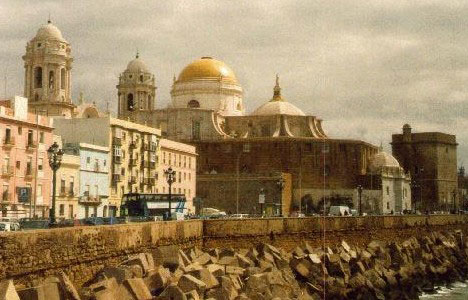 Though the recently discovered walls date back to the 8th century BC, most archaeologists agree the site on southern Spain’s Atlantic coast was a fully functioning city as long as 3,000 years ago, if not longer. 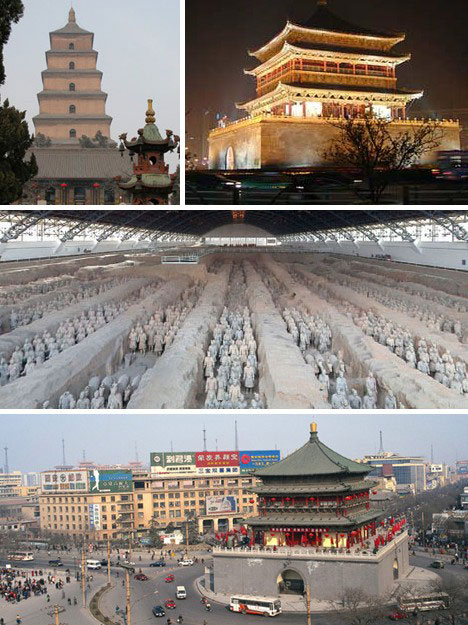 Over the past 3,000-odd years Xi’an has been the capital of 13 different imperial dynasties. The most striking reminder of Xi’an’s ancient glory comes in the form of the Terracotta Army, buried in the year 210 BC along with Qin Shi Huang, the first emperor of China. Though most of the lifesized figurines have not been excavated, it’s estimated that the army consists of over 8,000 soldiers, 130 chariots pulled by 520 horses, and 150 cavalry horses. 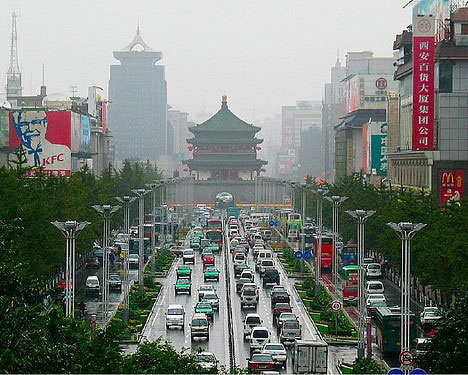 Notice the rather large and obtrusive KFC billboard in the view of downtown Xi’an above? Not to worry, it’s not long for this world – as are 190 other designated “eyesores” due to be removed from Xi’an’s city center when their current contracts expire, after which time no new advertising contracts will be accepted. That’s one sign of the times we can all appreciate! 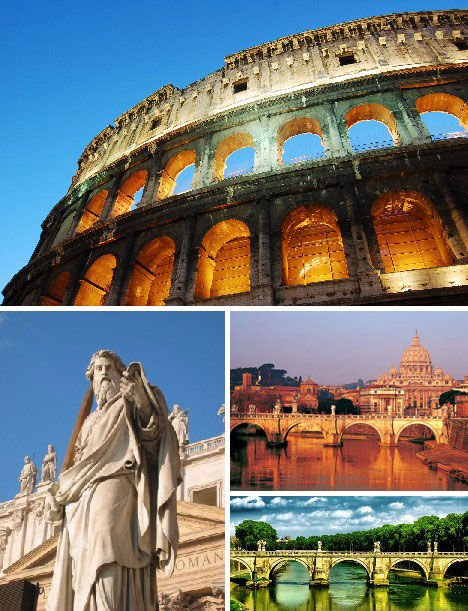 “The Eternal City”, Roman legends state that the city was founded in the year 753 BC by co-kings Romulus and Remus – who were raised by a she-wolf. Regardless of the fine details, Rome can trace its history back to those times. The city reached the height of its glory following the decline of Classical Greece and after the Roman army’s final victory over Carthage in the battle of Zama. By the time of Julius Caesar and the establishment of the Roman Empire, it could be said with certainty that “all roads lead to Rome”. 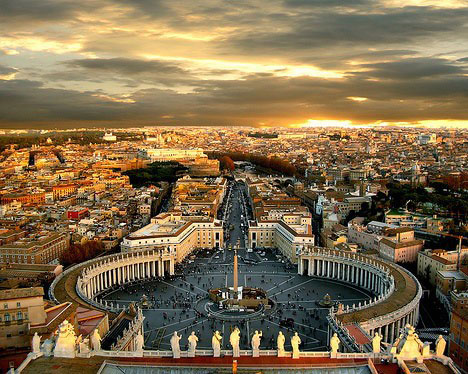 Rome and Romans endured difficult times following the Empire’s last gasp in the year 476 AD but with the growth of Christianity it once again rose to pre-eminence. Much of Rome’s ancient glory has been lost but much still remains. 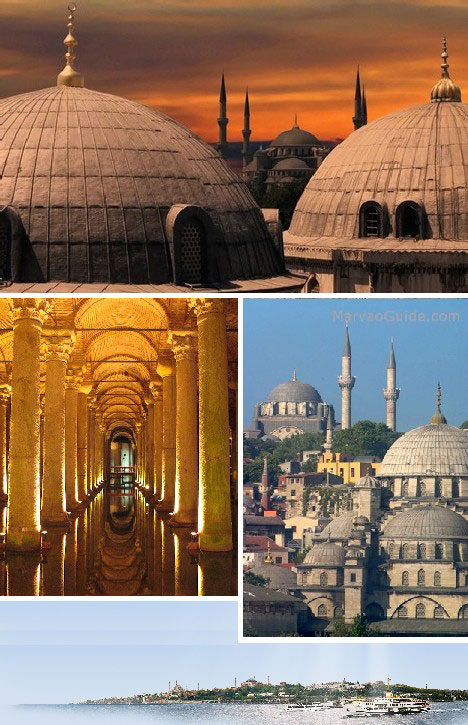 Rome’s successor after the fall of the Western Roman Empire, Constantinople was founded by the Roman emperor Constantine in the year 330 AD and remained one of the world’s greatest and wealthiest cities throughout the medieval era. It was built on the site of an existing city named Byzantium which was founded by early Greek colonists in the early 7th century BC. After shining brightly for over 1,000 years, Constantinople finally succumbed to the Ottoman Turks in 1453 and a new era in the city’s life began, this time under the name of Istanbul. 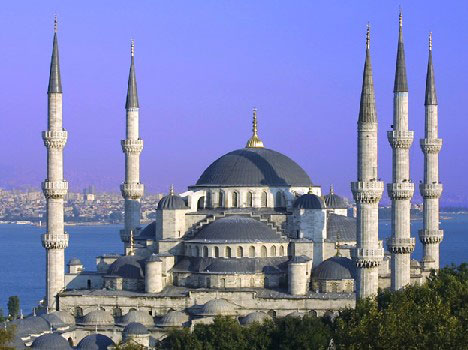 The Blue Mosque, built between 1609 and 1616, is one of Istanbul’s most popular tourist attractions. In its awe-inspiring size, interior decoration and above all beauty, it ranks with Constantinople’s magnificent Hagia Sophia basilica (now a museum) commissioned by the Byzantine emperor Justinian in the early 6th century AD.

Life attracts life, a pull made stronger with the passage of time. Those who have had the privilege and the pleasure of visiting an ancient city say they can feel the city’s lifeblood flowing down well-worn streets and pulsing through centuries-old marketplaces. Time passes; our lives flicker by like moths to a flame yet our eternal cities remain, burning bright, into the future.