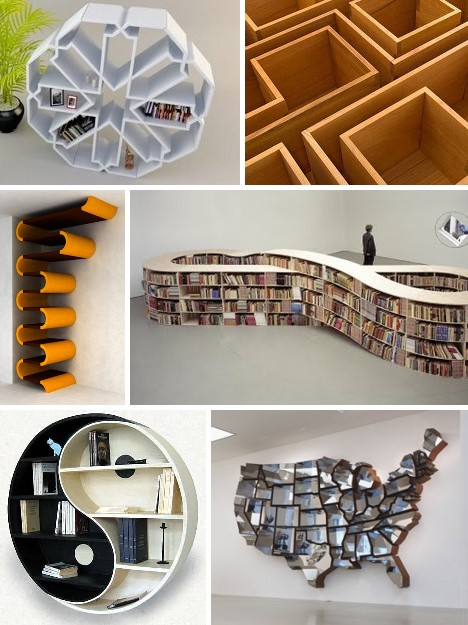 Books may seem ever more anachronistic as electronics and the Internet continue to supplant their traditional roles, yet there will always be a place for books in our lives – and in our homes. These 15 creative bookcases take outrageous storage to the next level… storageous? 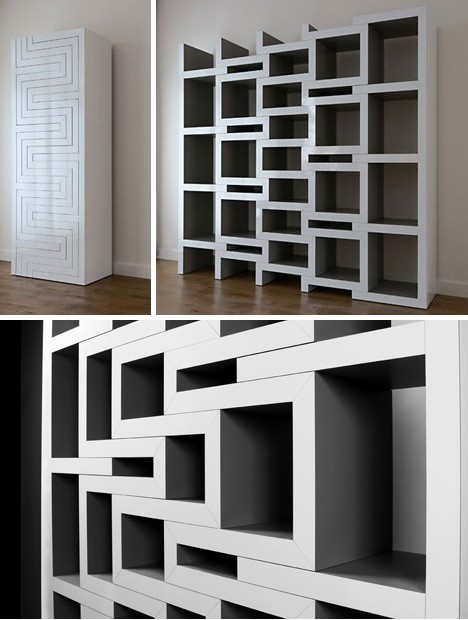 Book storage turning you into a nervous wreck? Reiner De Jong has a solution: REK, an expandable bookcase that expands to accommodate your book collection. Composed of 5 sliding sections that fit together not unlike a jigsaw puzzle, REK will enhance any decor scheme with its tough laminate finish (gloss white outside, satin grey within). 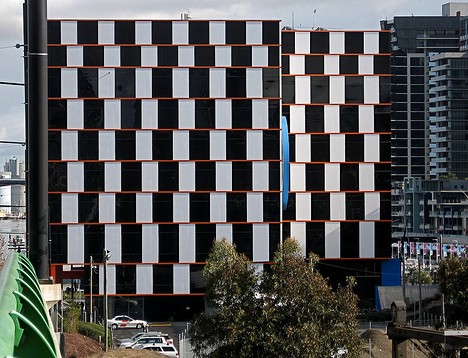 REK reminds one of the Cafe Wall Illusion made famous by the Australian Customs Service building. This iconic architectural optical illusion does NOT expand when more storage space is needed, but the building’s interior design could certainly be complemented by the installation of several dozen REK bookcases. 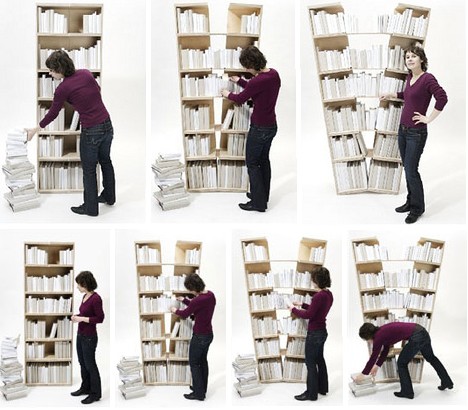 (images via: Gizmodo and Shoplet)

The Platzhalter bookshelf has a split personality, which happens to be a good thing. Possibly inspired by that guy everyone knows whose bookcases are so full tomes can be neither stored nor withdrawn, the Platzhalter bookshelf splits down the middle providing about 30% more storage space. Of course, “that guy” will just overstuff it again, but at least someone’s making an effort.

Bookman Is On The Case 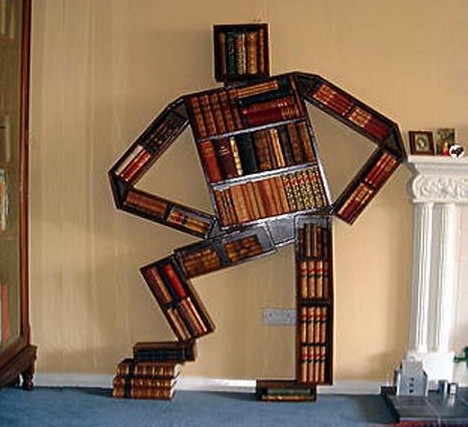 Remember that Seinfeld episode where Jerry’s being harassed by uber-diligent library cop, Lieutenant Bookman over an overdue book? Well, Bookman’s not only still ON the case, he IS the case: this anthropomorphic shelving unit can turn any thin, single and neat joy-boy into the ideal well-read man.

Coast To Coast, Cover To Cover 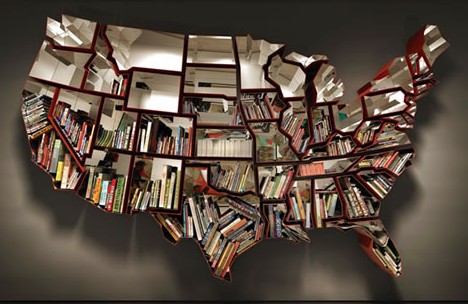 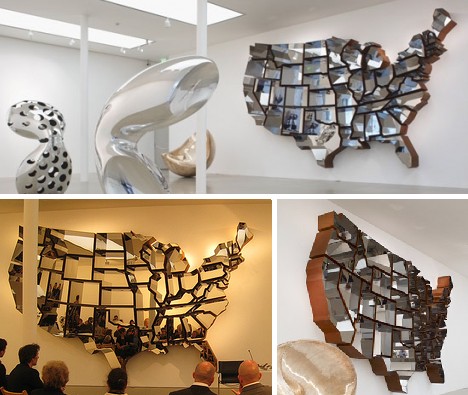 (images via: Neatorama, Visualingual and 770)

When you’re a famous artist like Ron Arad, you can get away with calling an America-shaped bookcase anything you want. Even, say, “Oh, the farmer and the cowman should be friends”. It doesn’t have to make sense (though it’s likely to make Arad dollars), it just has to look good. And so it does. 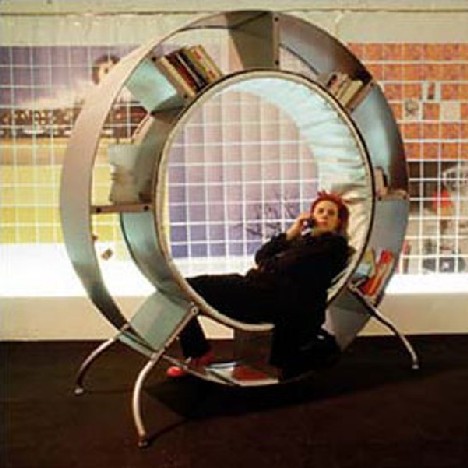 (images via: Trends Updates and A.P.C.I)

This combination lounge chair and bookcase could have been called Psychotic Reaction but that’s another song for another time. The Reaction Bookcase, or Bibliothèque Réaction in the language of its French designer, Olivier Peyricot, resembles an oversized hamster wheel six feet in diameter – or maybe the library on the International Space Station. 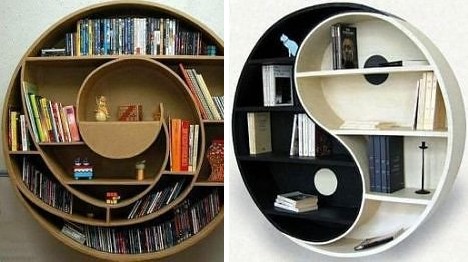 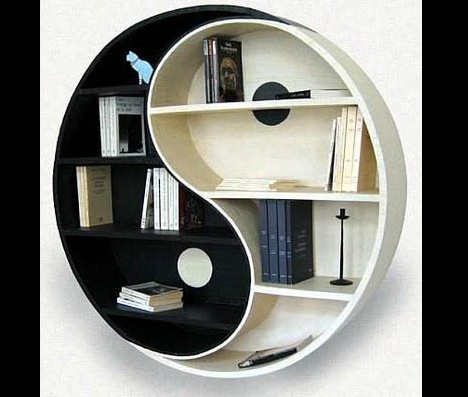 As solid and strong as the above Yin Yang Bookcase may look, in truth it’s made of cardboard – and you can make one too! Eric Guiomar and the gang at Instructables provides complete plans that will allow anyone to add a little balance to their home environment while impressing the hell out of their friends in the process. 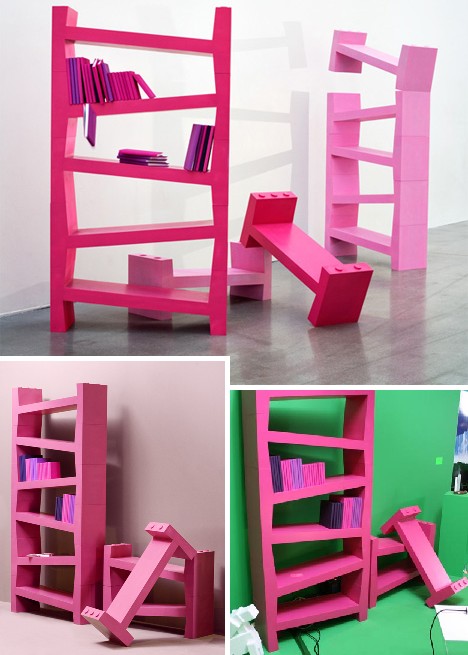 (images via: Hooked On Houses and Designboom)

These shocking pink bookcases look like they have a skew loose… or, they look somewhat askew. Whatever. The Skew Bookcase is a modular product that looks like the normally straight-laced designers at IKEA got into some bad acid. That’s not too far off the mark, actually, as Smånsk is, in their own words, “a Stockholm based design studio that brings you happiness, good health and beautiful furniture and interiors.” Heavy man, far out. 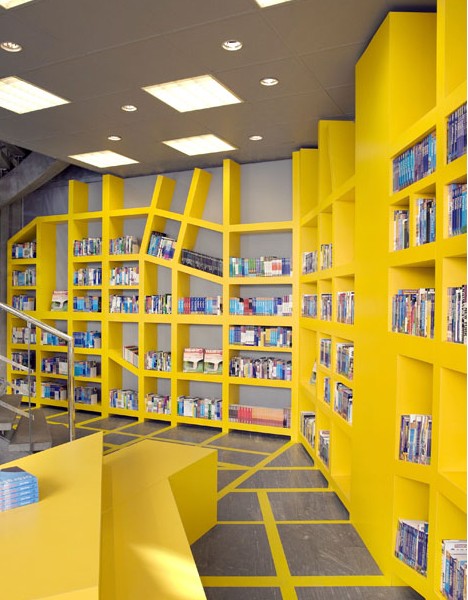 Above is Smånsk’s design for the Vagabond Travel Workshop, most definitely the place for a “trip” in every sense of the word. 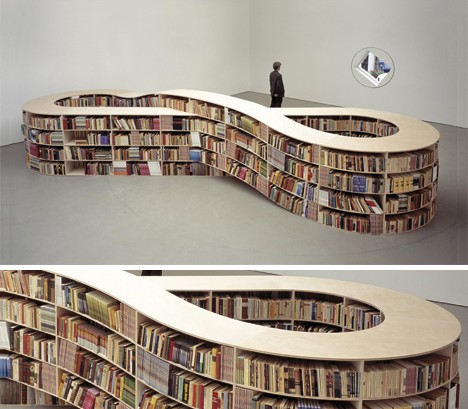 (images via: Book Patrol and Neatorama)

Where does one keep an infinite number of books? In the Infinity Bookcase, of course! Dutch conceptual artist Job Koelewijn created this large-scale figure 8 bookcase to reflect both the infinite power of books as they relate to the infinite nature of knowledge. It’s hard to say how readers access the inner shelves of the bookcase… but with infinite time, someone will surely figure it out. 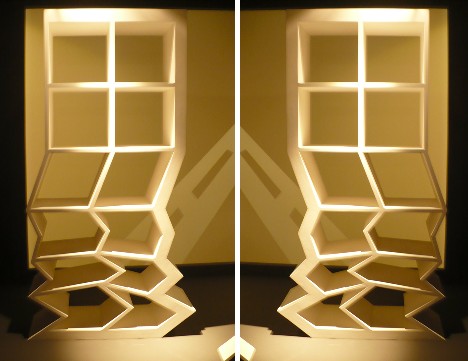 The Blurred Bookcase looks as if its owner is The Last Of The Red Hot Readers. As for the design itself, it appears stable enough though if you stare at it enough, it might have you wondering the same about yourself. 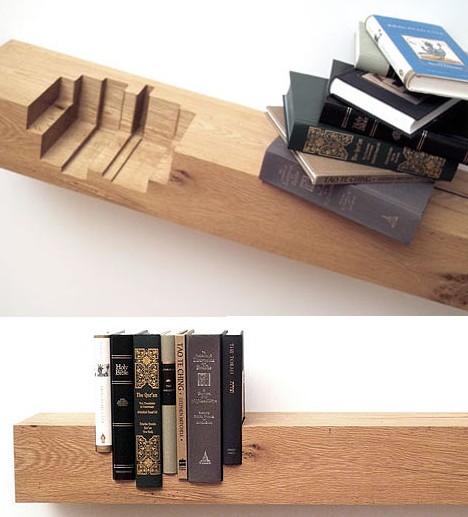 (images via: Design Public and The Green Head)

The JUXTAPOSED: Religion Bookcase by BlankBlank plays by the numbers: it holds just 7 selected theological books, was made in a very limited edition of 50, and costs $2,500. Once you get past that, it’s easy to appreciate the unique attributes of this most unusual reclaimed hardwood shelf that puts very different religious books, for example the Bhagavad Gita, Bible, Qur’an, Analects of Confucius, the Tao Te Ching, Discourses of the Buddha and the Torah on the same level. Literally. 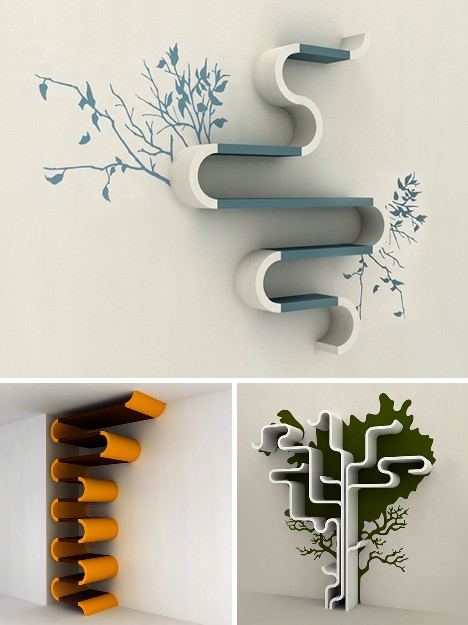 (images via: Behance Network and Tuvie)

These modular scaffold bookcases by Maria Yasko can be used to store much more than books. Made from Corian, a tough but light synthetic material often used to make countertops, Yasko’s pieces come in a variety of appealing colors. How they’re connected depends on the mood of the owner with the only rule being “the more, the merrier”. 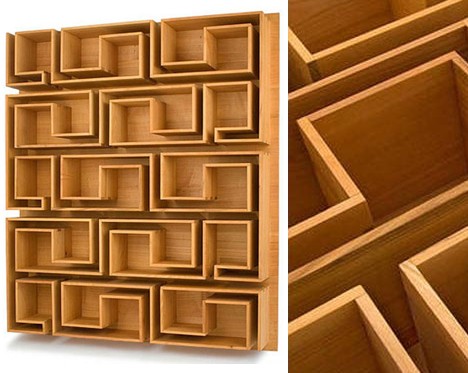 This amazing bookcase from German design firm Woodloops looks so good, you won’t want to distract from the design by stocking it with even one single book. Like all of Woodloops’ creations, the maze bookcase is constructed using only FSC (Forest Stewardship Council) certified wood hand-finished with natural waxes and oils. 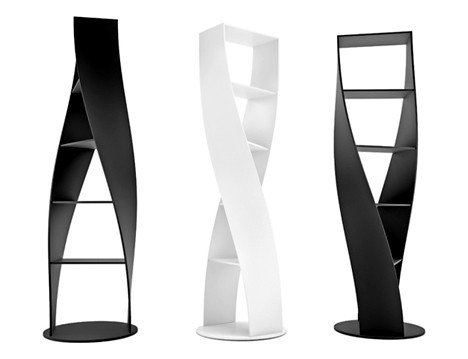 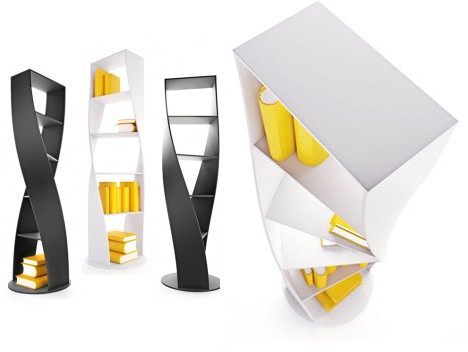 If the Mydna Bookcase from Mexican designer Joel Escalona looks familiar, it also sounds familiar: as in “My DNA”. Available in two versions – one static and the other rotating on its pedestal, the Mydna Bookcase puts a new twist on storing one’s books. 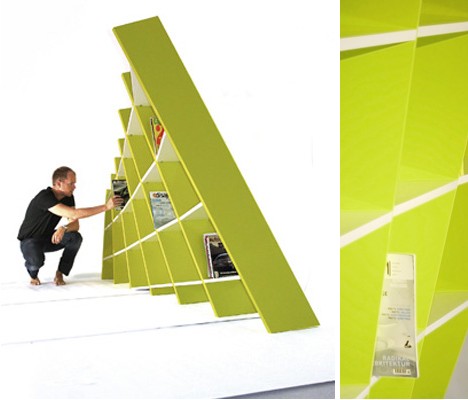 This somewhat disturbing bookcase from Sweden’s ADDI might look like it’s about to topple over but never fear, it’s just an illusion. Even so, the oddly named Billy’s Brother Bookcase effectively blurs the line between hardware and sculpture. 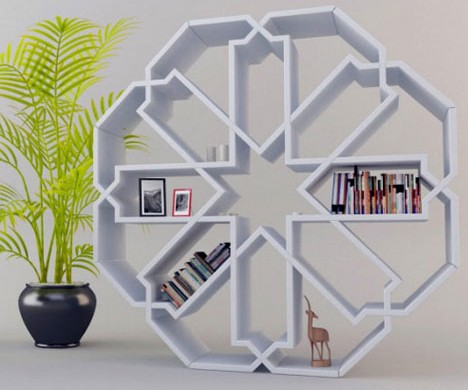 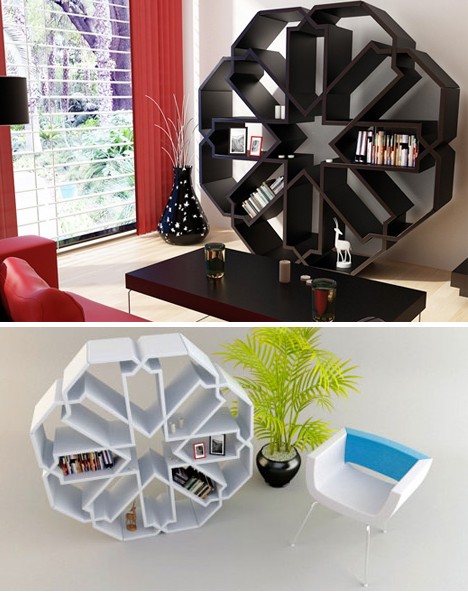 This beautiful, snowflake-shaped bookcase from Younes Douret is called the Bibliothèque Zelli. Measuring 140cm (about 56 inches) in diameter, this is one piece of furniture that will be the center of attention wherever it’s placed. The bookcase, distributed by Dar en Art, comes in white or black and according to Douret, is not actually based on a six-pointed snowflake – instead, Douret draws inspiration from an Arabic graphic called a “Zellij”, which has 8 points and is composed of 8 identical segments making it surprisingly easy to build.

Well, that should cover it (sorry), at least for the moment. Reading will never go out of style and we can thank the world’s bookcase designers for helping ensure that style never goes out of our reading.