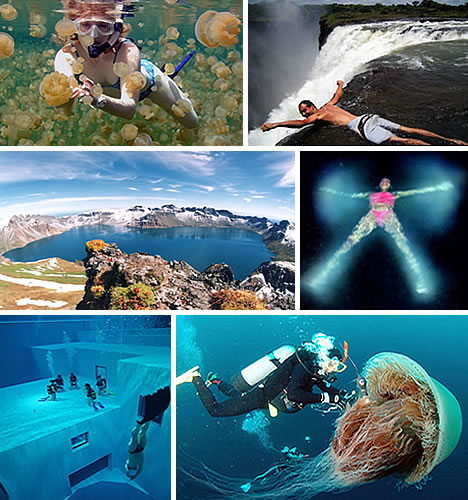 It’s been said, Don’t wait for your ship to come in – swim out to it.  This positive slant on the big picture of life is something that swimmers can really get into. Across this world, there are thousands upon thousands of places to swim. It’s good for your health and good clean fun. But if you are bored of ordinary swimming pools, there are too many other unusual or cool places to swim that are far from dull to keep you happy and entertained. Consider a bit of travel to visit theses 14 places to swim, from the bizarre to the beautiful. 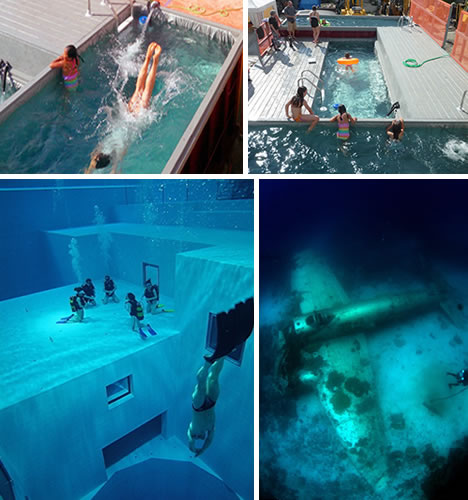 Most people enjoy playing in the water. Some places are cool, some more of an adventure, and some places are a makeshift place to swim. Pool parties are a blast, but in Brooklyn the party is a version of dumpster diving. This trashy, trendy feature of filling up the bins with water and going for a dip is making waves in urban areas. It’s about urban renewal and the effective use of resources and space. A very different type and the deepest recreational pool in the world can be found in Belgium. Nemo 33 is over 100 feet deep. However, yet another swimming experience can be found in Truk Lagoon, a part of the Federated States of Micronesia. Chuuk, is a sheltered body of water nearly fifty miles long by thirty miles wide and is surrounded by a protective reef. In the crystal clear water, divers play among the ghostly remains of 60 ships and 275 aircraft that haunt the seabed. Some ships lie at a depth of 49 feet.

The Dead Sea is a hypersaline lake and one of the world’s saltiest bodies of water. This salt lake has Jordan to the east and Israel to the west. The shores are the lowest land point on the surface of the Earth, at 1,385 feet below sea level. The Dead Sea is the deepest hypersaline lake in the world with a depth of 1,240 feet. Due to the high salinity, a person is especially buoyant and can sit almost on the surface without sinking. The density of the saltwater is supposed to be an awesome sensation. 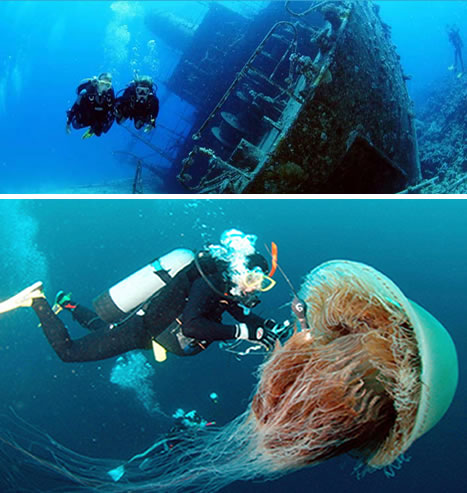 Divers play in the deep waters around the globe. Some search for treasure or sunken ships, while others swim where they can enjoy the coral reefs and colorful, exotic marine life. One extreme form of aquatic species is the giant jellyfish. They are benefiting from overfishing and now are taking over parts of the word’s ocean like off the coast of northern Japan. Some divers choose to swim and to track a monster Echizen jellyfish like this one with a body almost 5 feet across. Swimming with super-sized jellyfish can also be done in Southeast Asia, the Gulf of Mexico, the Black Sea and the North Sea. The biggest jellyfish in the world is called Nomura, can weigh 400 pounds and be the size of a Sumo wrestler. 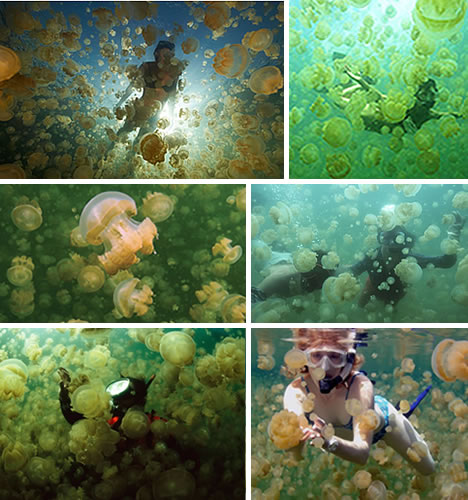 In the nation of Palau, more than 12,000 years ago, a rock island sealed off from the ocean and jellyfish were trapped inside as it changed to a marine lake. With few predators at Eil Malk rock island, the jellyfish thrived and multiplied. Now this lake holds more than 10 million jellyfish and is known as Jellyfish Lake. Their ability to sting disappeared over time, so now swimming with them is completely harmless. These jellies vary from blackberry- to basketball-sized and swim with the path of the sun across the surface of the lake each day. 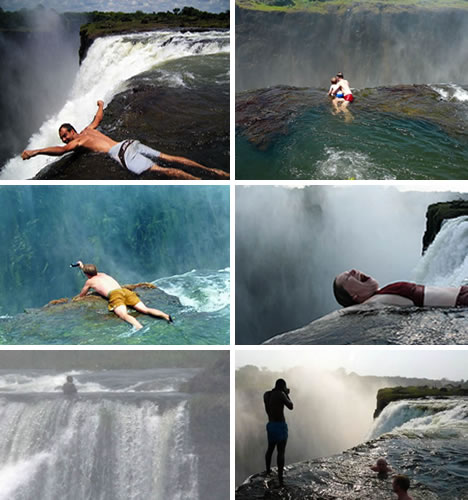 In Zimbabwe, a surreal location called The Devil’s Pool is a small lagoon enclosed by rocks yet on the very edge of falling into a gorge. It can be found at Victoria Falls, one the Seven Natural Wonders of the World. It is 5,600 feet wide and 360 feet high, where the water plunges down the largest waterfall in the world. The drop-off  is mere inches from The Devil’s Armchair. When the river is at a safe level, between the months of September and December, people can swim in The Devil’s Pond as close as possible to the edge of the falls. Swimmers can sit right on edge of The Devil’s Armchair without being pushed over the edge and falling to their death below. 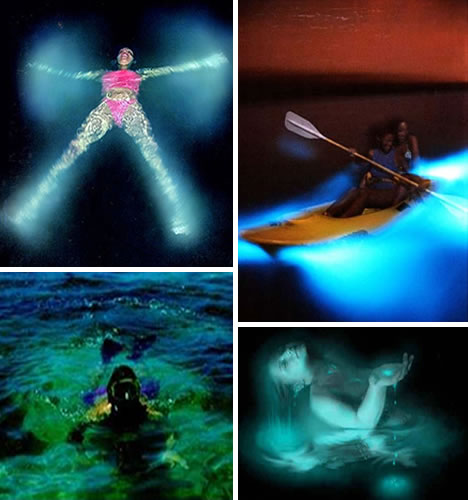 Vieques Island in Puerto Rico offers one of the best swimming experiences. Although the name Mosquito Bay may not sound enticing, this shallow body of water reveals secrets even during dark nights with no moonlight. It is the water that glows. No, not with radioactivity, but within each gallon of the bay, there are 720,000 phosphorescent single-celled organisms that glow when they are agitated. Swimming in Mosquito Bay will bathe your limbs in blue-green light. This eerie yet cool light is a defense mechanism by the tiny dinoflagellates that will dim and eventually disappear if you hold completely still. If, however, you scoop up a handful of water, you can watch the glowing planktons roll down yours arms and stream from your hair. Like the Dead Sea, the salinity of the water is so high that you can float sitting upright, instead of sinking. Have fun floating and glowing in this rare and endangered Bioluminescent Bay. 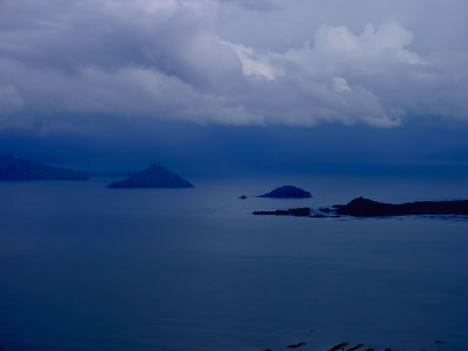 In the Philippines, Taal Lake is a freshwater lake within a crater abyss that was formed by eruptions eons ago. The active Taal Volcano lies on an island in the center of the lake. Swimmers can discover all kinds of surprises in this lake, such as the world’s only freshwater sardines or something a bit more ominious. Taal Lake is home to one of the world’s rarest sea snakes, one of two “true” sea snake species that live entirely in freshwater. Have fun swimming here, but keep an eye out for the sea monster snake, the Hydrophis semperi. 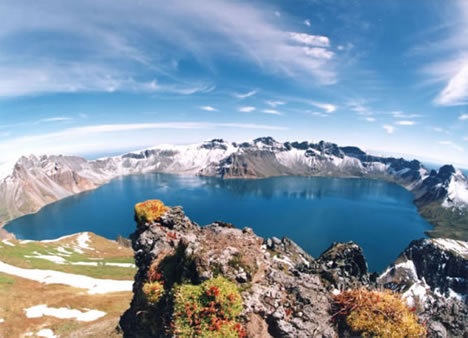 Another absolutely gorgeous lake for swimmers to visit is aptly named, Heaven Lake. Located on the border between North Korean and China, this is the world’s highest crater lake at a altitude of 7,182 feet. Heaven lake is huge and has a depth of 699 feet. However, if you plan to travel so you can swim there, keep in mind that from mid-October to mid-June, it is covered with ice. 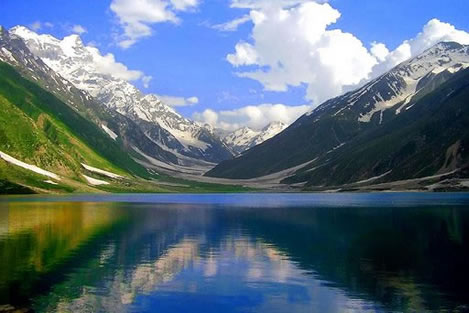 In a land of beauty and yet hardships, Pakistan offers a serene and breathtaking place to swim at Lake Saiful Muluk. It is one of the highest lakes in Pakistan with an altitude of over 10,577 feet above sea level. The water here is crystal clear and cool, fed by the melting glaciers around the high basin. 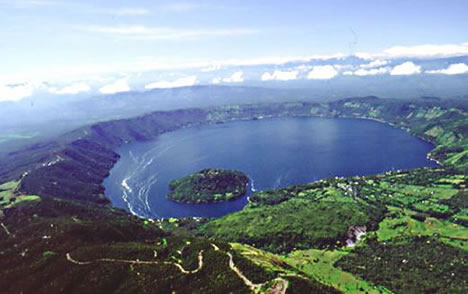 Another spectacular natural pool and cool place to swim can be found in El Salvador. Coatepeque Caldera is a volcanic crater that was formed from massive explosive eruptions between 27,000 and 57,000 years ago. Six rhyodacitic lava domes have formed, making it an unusual place to swim. There is also a hot springs at Lake Coatepeque. The island of Teopan can easily be seen in the lake and has some importance as a Mayan site. 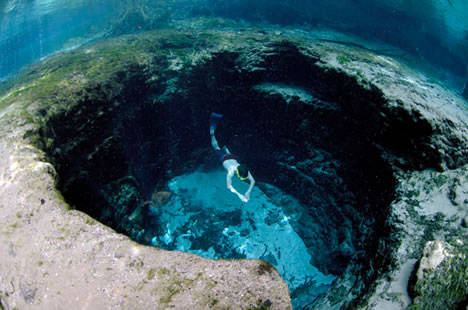 Some water lovers grow bored of swimming for swimming’s sake and instead decide to snorkel or dive. In northern Florida, this underwater cave can be reached by free diving. The diver in the photo is swimming about 20 feet into the opening of Devil’s Eye Spring. Other free divers descend to 40 or 45 feet, while yet other brave souls free dive even further and leap-frog from air pocket to air pocket inside the cave.