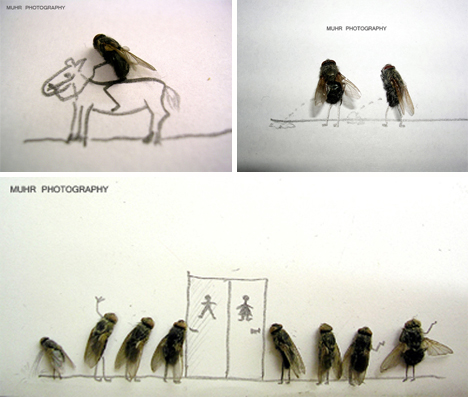 Artistic inspiration can strike anywhere. For Swedish photographer Magnus Muhr, inspiration came from dead insects. As bizarre as it sounds, the photographer poses tiny dead flies onto paper, draws arms, legs and backgrounds behind them, and then photographs them in their new environments. The result is a hilarious series of photographs. 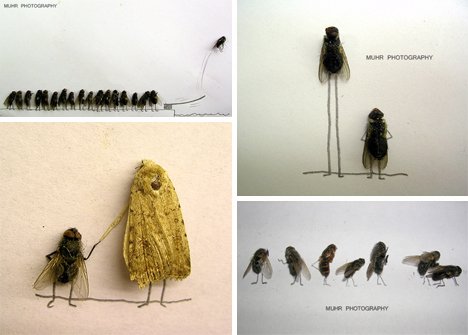 The pictures are simple and fun; the backgrounds are kept clean and minimalistic so they don’t interfere with the overall picture. The little arms and legs actually look like they belong to the critters. There’s no word on whether the insects died of natural causes or were killed by the artist. 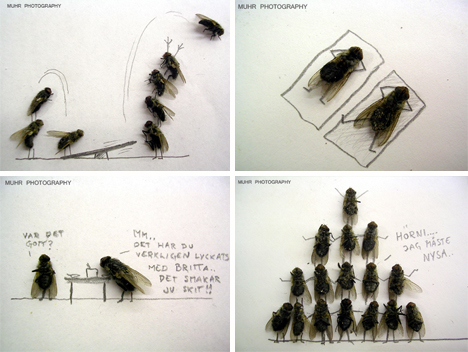 The insects look at home in pretty much whatever configuration Muhr puts them in. They manage to be adorable, even though playing with dead bugs is a bit gross. Looking at them up close may inspire shudders, but they’re actually very innocent-looking compared to other insect photography subjects. In the pictures above, the text roughly translates to “It was good?” “You’ve done great with the British cuisine…it tastes like shit!” and “Guys…I have to sneeze…” 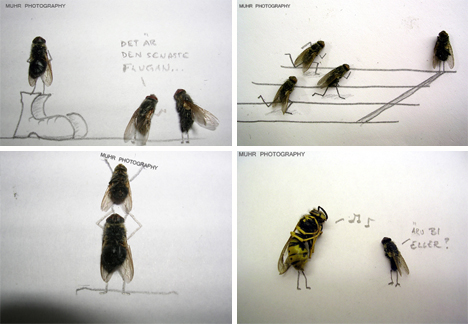 Above, the captions read “It’s the latest craze” and “Are you bi, or…?” (in Swedish, the words for “bee” and “bisexual” are similar). The configurations that Muhr puts his insects into can be alternately weird, cute, and puzzling. But they’re always interesting little worlds. Who knows where Muhr’s imagination will take the little bugs next? Muhr also creates more serious photography, which can be found in his online portfolio.