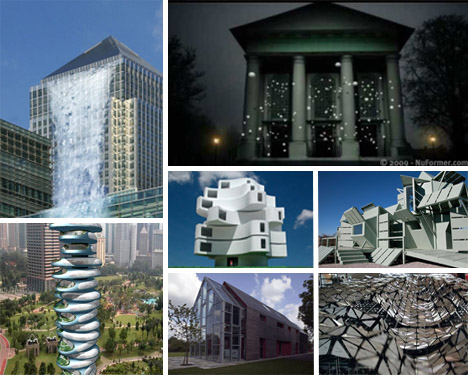 Buildings should be rock-solid steady under our feet, surely? Our instincts certainly tell us so – but perhaps someone should tell the current wave of architects and designers who seem so intent on rocking our world in a more literal sense than we’re used to. Have a look at these 13 more examples of buildings in motion, whether by illusory trickery or natty mechanics, and ask yourself – are we ready for urban life on the move? 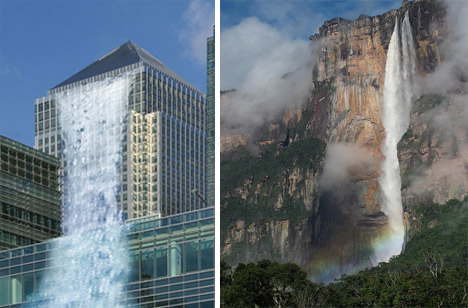 In the urban jungle of the future, our survival-senses are going to take a serious battering. What would you do if a waterfall appeared to gush out the side of the towerblock overhead? Anyone not answering “run like the clappers” is probably working in the exciting new world of telematics – the projection of computer imagery on building surfaces. Take the proposal by consultants Body Data Space for a beautiful yet thoroughly alarming depiction of Angel Falls on the side of buildings in London’s Canary Wharf… 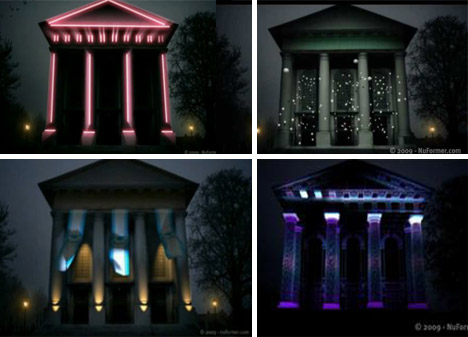 …or NuFormer‘s jawdropping showcase featuring colorful, crystal-clear imagery thrown onto the side of a monumental building. When the CGI is tailored to fit the architecture, it can appear to rebuild it before your eyes – and the effect is astounding. 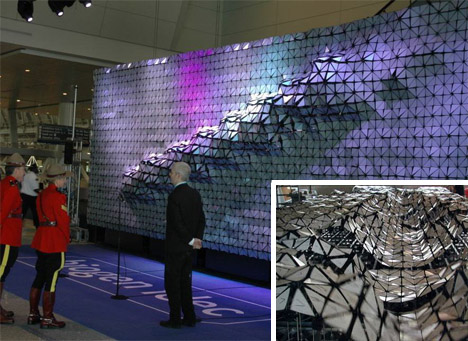 For a more tangible variety of building facade illusion, we turn to the Hyposurface – an array of nacho-sized triangular surfaces that move in and out according to varieties of input. The result is a wall that behaves like a liquid.

It can respond to preprogrammed pattern-making, to light, to sound…the possibilities seem endless. Want it to mirror the shape of people walking past? It can do that. Respond to the noise of traffic? Check. If the future cityscape is Hyposurfaced, it is going to look busy. 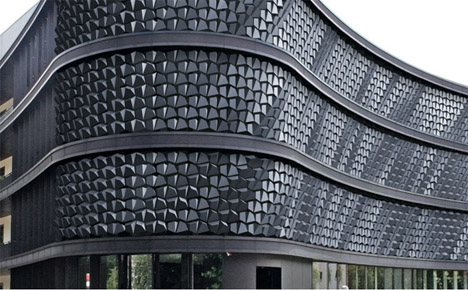 Along similar lines is the Flare dynamic building surface. Its array of metal plates is controlled by pneumatic cylinders that alter the surface’s angle to the incoming light, making it lighten or darken like a monochrome pixel.

As this computer simulation shows, the effect is of a living, breathing building surface – one that could play tricks with your sense of perspective (which begs the question, how would drivers feel about buildings that ripple and flow as they pass them?). 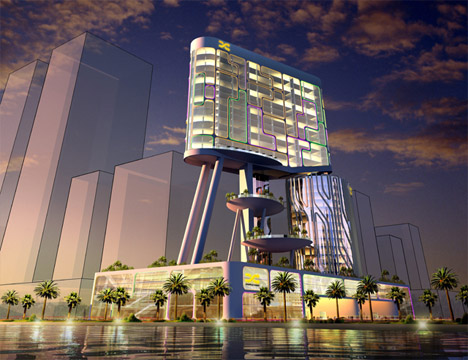 But enough of illusions. If it is real movement you are after, try Dubai’s upcoming Shuffle Tower by James Law Cybertecture. Take four elements: residential tower, office tower, gardens, shopping mall. Arrange them on a series of mechanically jacked platforms – and whirl them around. Each section slowly rotates to give a 360-degree view of the surroundings and an ever-changing view. 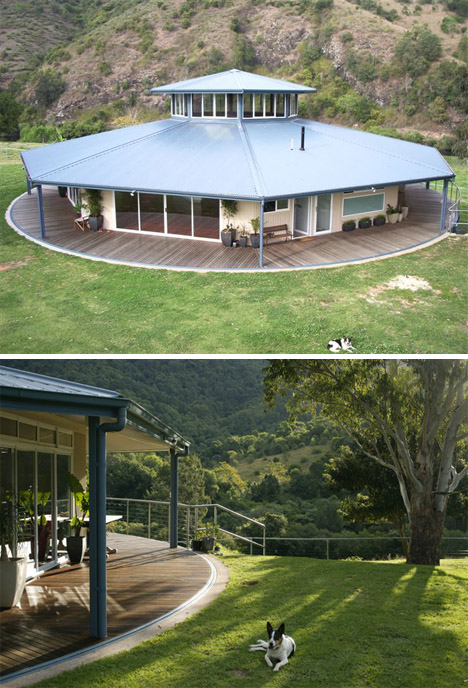 The idea of putting a spin on conventional buildings isn’t just confined to the glitzy metropolitan sprawl. This example is in Wingham, Australia (population 4,182) and is descriptively named the Everingham Rotating House. Ever wanted to be able to follow the sunlight as the day waxes and wanes? So have the owners, prompting them to invest a decade into planning and building this 50-ton marvel. Electronics allow the occupants to control the rate of spin, up to a top speed of 160 meters an hour, during which time it would complete two full revolutions. 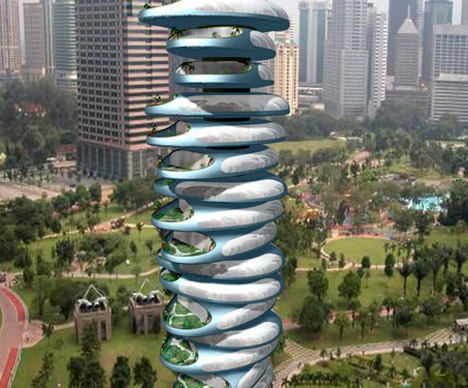 Back to the big city. You will have heard of the amazing Dynamic Tower of Dubai (it would be difficult to have missed it over the last 12 months) – but this is just the start of Italian architect Dr. David Fisher’s plans. As well as erecting two signature towers in Dubai and Moscow, Dynamic Architecture have released other concept designs, such as the one shown above. 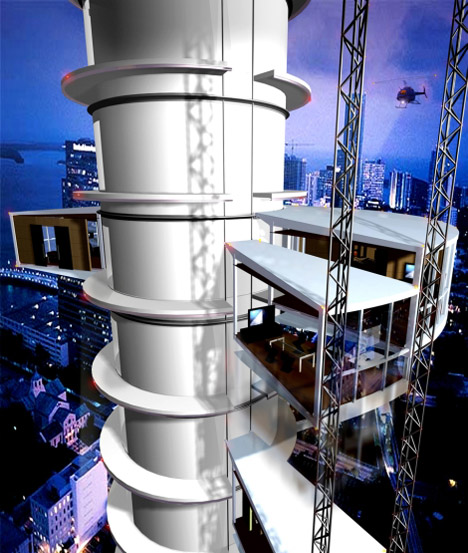 The Dynamic tower is being assembled from prefabricated factory-built segments, taking the current obsession with modular design to new heights (sorry). Each module will be built to be self-containing and to draw its power and resources from the central core. Potentially, each section could be replaced wholesale if it malfunctioned – although we would like to see someone replacing the 80th floor of a building without a major kerfuffle. 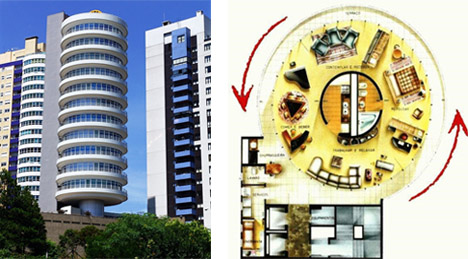 One building you can see on the skyline today (if you live in Curitiba, Brazil, that is) is the Suite Vollard – 11 floors of independently rotating apartments. The name comes from a set of 100 engravings by Picasso – and the surrealist painter would surely have approved of an apartment where the view constantly changes and your door does a lap of the room.

If you are not fussy about which direction you’re pointing in the morning, keep an eye out for Michael Jantzen’s Wind Pavilion. It is still at the conceptual stage but it’s making a real buzz among the green building sector…because the movement of its lightweight segments (governed by the wind) is involved in generating electricity used to internally light it up at night. 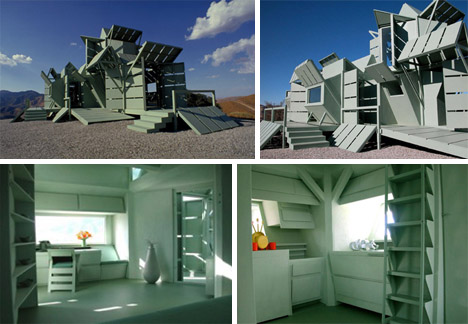 Jantzen further proves himself a mover and shaker in the field of moving architecture with the M-House, a riot of modular panels and transforming spaces. When the wind changes direction, you can change the shape of the house to suit. If you want a house extention (planning permission allowing, of course) then buy a new module and assemble it on the end.  Thanks to the slightly chaotic planking style, rooms can be made as airy or as tightly sealed as you like, according to season, weather or whim. 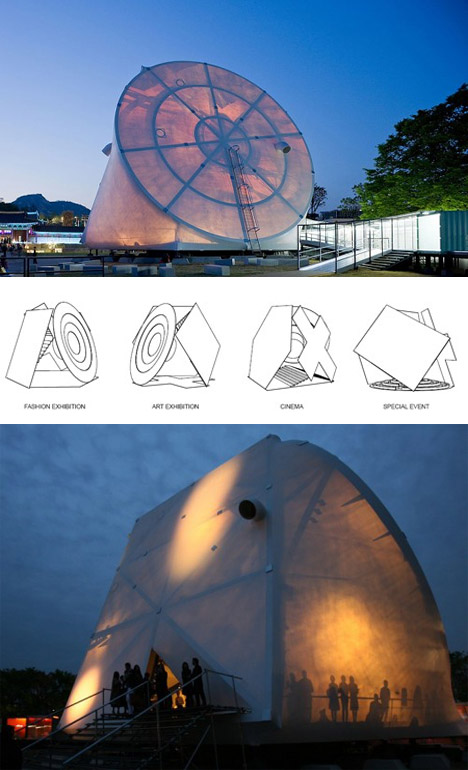 Staying with the theme of adaptability, the 160-ton structure that has just opened in Korea is designed to fit every social function.  Known as the Transformer, the building is a tetrahedron covered with a light-permeable membrane…and when a new type of venue is needed, the entire structure is flipped over to show a new side and a new social identity. 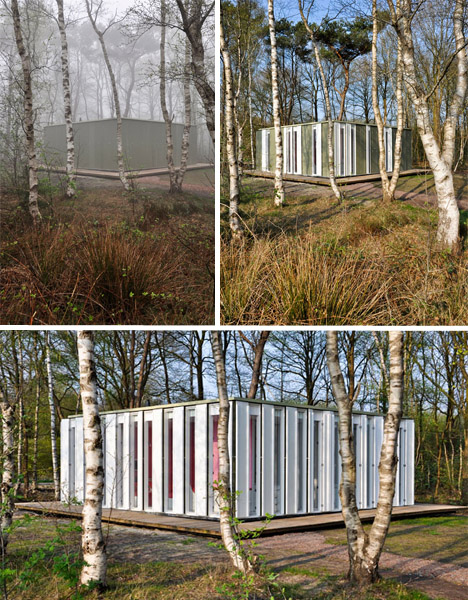 You are looking at a holiday cottage with a difference. Not only has the internal floorplan been turned inside-out, but the outside – a series of vertically-slatted windows with sliding blinds – can be opened to the light, or locked up to conserve energy and make the occupants feel snug. It’s called the Merry-Go-Round which nicely captures its sense of fun, and while we have questions (what happens with that flat roof when the rain hits?) we love this new face to family getaways. 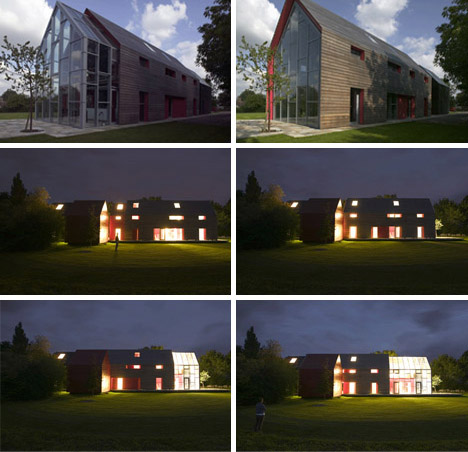 And finally a moving building that plays hide & seek with the world. The Sliding House is a home built like a sword in its scabbard. The 50-ton outer skin is on rails and slides back to reveal a greenhouse, allowing the owner to control the amount of light spilling out into the garden at night. It’s also perfect from hiding away from prying eyes. When the shape of our homes can change to suit our wants and needs – how much will they say about us?