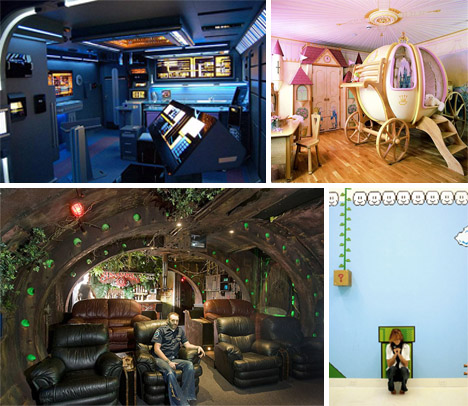 While many of us go for a functionalist, pick’n’mix approach to home decor (“I need curtains: oh, that will do” etc.), let us be upstanding for the financially brave, creatively passionate and unashamedly geeky souls who transform their homes into miniature versions of their favorite corners of modern culture, as these 8 thoroughly unique examples illustrate. 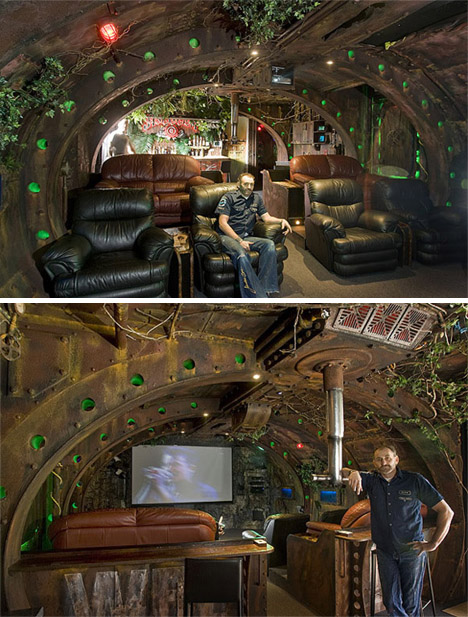 If you wish that the Steam Age was still with us and have a thing for overengineered pipes and rocket-firing dirigibles, you would feel thoroughly at home in this Extraordinary Gentleman’s house in New Zealand. The house is designed to look like a beached  Twenty Thousand Leagues-style submarine, complete with rust, encroaching greenery and a working periscope! Feeling similarly inspired? Prepare to have your savings torpedoed – this beast cost $100,000 to build. 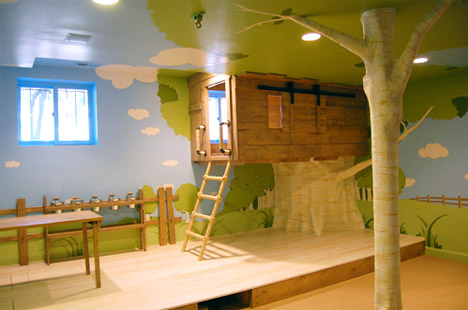 Everyone wants a treehouse. (Even adults want a treehouse.) But is it going too far to build a treehouse in your bedroom? 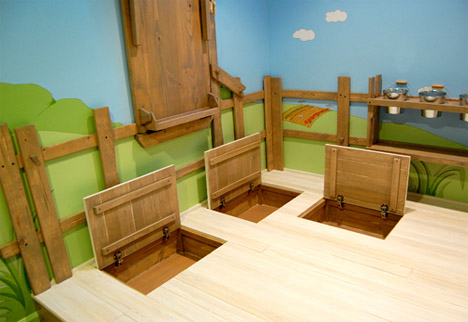 The Kidtropolis Magic Indoor Treehouse Bedroom is kitted out with everything a treehouse-hugger could wish for. As well as the bed (only accessible via ladder), the room contains trapdoor storage facilites and a table that folds down from the ‘fence’ running round the room. 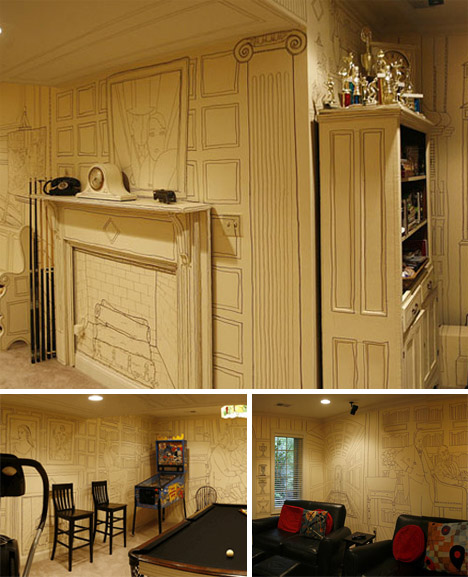 (Images via: Illusion 360 and Sellsius)

Staying with wood, what happens when you want a plushly-paneled basement study and your budget won’t stretch? For Lexington (Kentucky) lawyer Charlie Fratzer, the answer was simple: pull out a pen and draw it. With nothing but a $10 Sharpie and a fertile imagination, Fratzer has decorated his basement with staircases, furniture, members of his family and historical & fictional characters including Winston Churchill, Sherlock Holmes and Bullwinkle & Rocky. 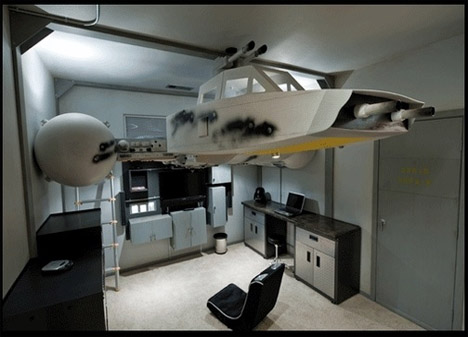 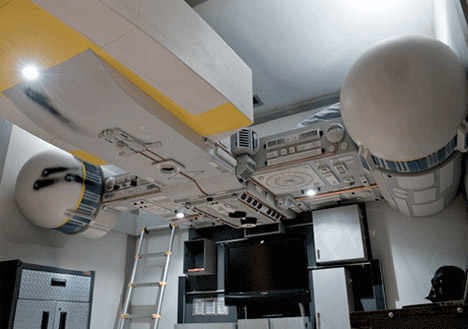 …and the centerpiece (if you can call something entirely filling a room a ‘centerpiece’) is a reconstruction of a Star Wars Y-Wing. If you are wondering where the bed is, it’s laid along the wing. All you need is a droid alarm clock and the illusion is complete. (“R2, that duvet’s broken loose again, see if you can’t tuck it in”). 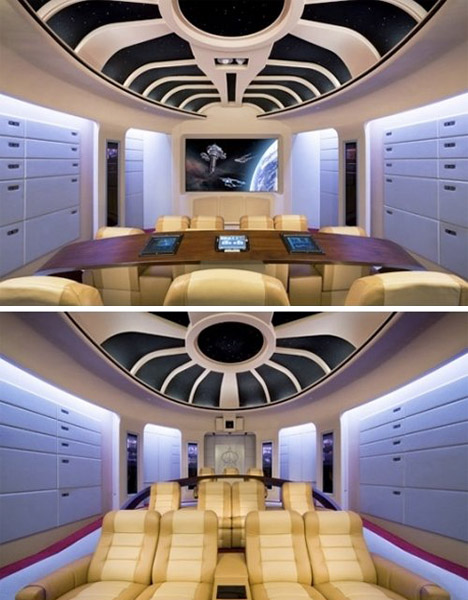 Or perhaps your scifi tastes lean more towards the other largest franchise in the known Universe – in which case this NCC-1701D (that’s “Star Trek: The Next Generation‘s USS Enterprise” to us terrestrial folk) home theatre should push all the right buttons. Check out other 14 similarly creative / mad-as-a-fish examples over at SlipperyBrick. 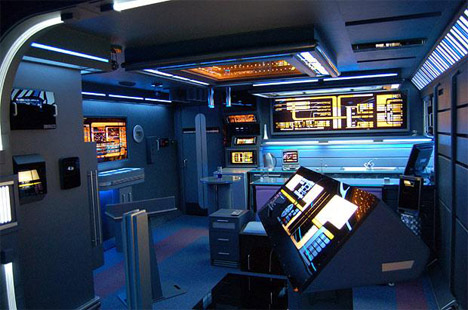 (Image via: The Telegraph)

But for sheer unadulterated Trek-lurve, the prize goes to interior designer Tony Alleyne. After his marriage faltered, Alleyne decided to turn his flat into the ultimate geek bachelor pad – by modeling it on the set of Star Trek: Voyager. 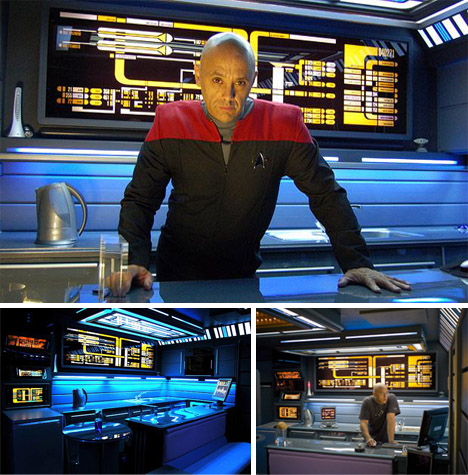 (Images via: The Telegraph and The Mirror)

Press the doorbell and a voice says “welcome to the 24th century” – and from there it’s a Trekkie’s paradise, complete with a “fully-working transporter” (a what?), touch-panel lighting, command consoles and a replica of Voyager‘s warp core that propels the ship between the stars. (It’s in the spot where the fridge used to be).  The price of all this geeky luxury? Fourteen maxed-out credit cards,  $160,000 in debt…and bankruptcy. Alleyne remains philosophical: “I’m still proud of what I created, but it’s been a financial disaster”.

If you constantly have the Mario theme-tune running through your head (like the creators of this little masterpiece), why not turn your home into a shrine to your favorite Italian plumber? That is what Antoinette J. Citizen has done, as reported by Wired. The walls are painted in jolly Mario colors and are studded with bricks that play the original sound effects when poked and pushed (and maybe even when jumped on). How many shiny gold coins did this cost? 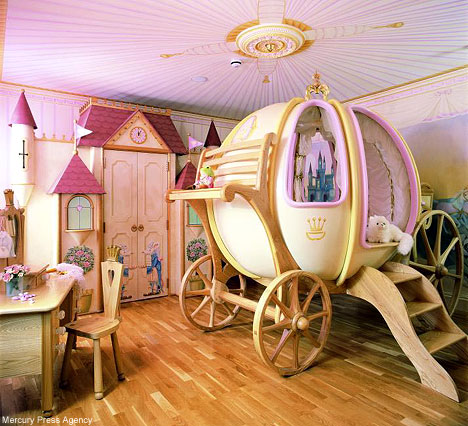 And finally, for all young girls pining to live the Cinderella dream (the glamorous ending, not the sitting-in-cinders part) then that dream can be a reality – if daddy is a premiership footballer with $80,000 to kick around, that is. 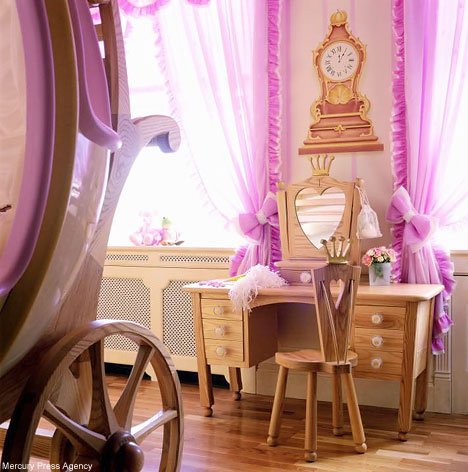 The individually-tailored work of Mark Wilkinson Furniture, these luxury items of furniture include ornate murals and hand-crafted carriage beds. Some footballers have even come up with their own designs – leading the British media to label these creations the latest demonstrations of footballers having more money than sense. Would you like your darling treasures to grow up expecting to be treated like fairy-tale royalty?