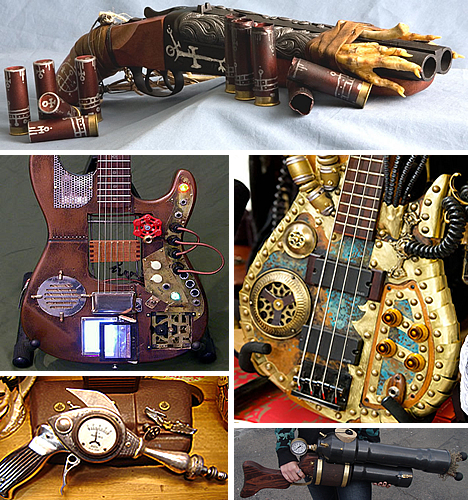 Steampunk, folks seem to love it or to hate it. C’mon, you gotta admit the guns and guitars are cool. Rust, steam, copper tubing, clockwork gears, gauges, and brass-coated coolness appeal to the rebel in us all. Steampunk is a vision of the future as seen through the eyes of the past. Depending how you feel about shredding or shooting, this beautifully crafted blend of form and function, these pseudo-Victorian mechanical “steampunk” style guns and guitars should make you smile…or perhaps drool?  Here are sexy as sin and amazing modifications of contemporary technologies to fit the aesthetic of Steampunk guns and guitars. 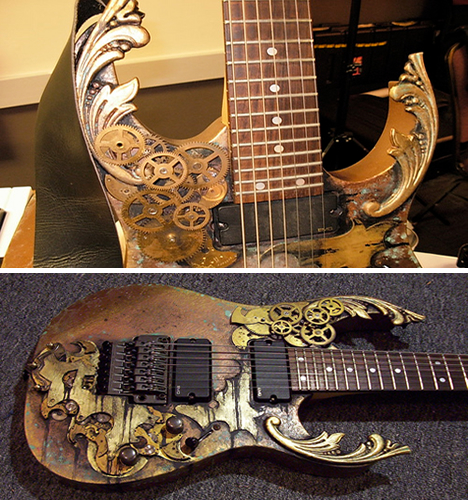 Abney Park is a Seattle band influenced by Steampunk. Nathaniel Johnstone plays a guitar for Abney Park and influenced many Steampunk enthusiasts to do more than listen to, sing along, or dance to their music. Brass, gold, knobs, and clockwork gears are blended into a functioning fashion of fantasy where past and future mix into this guitar. 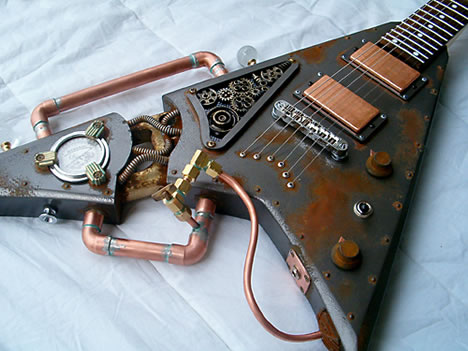 This is a Jackson Rhoads V custom rebuilt guitar into a steampunk look. With a name like Villianizer, you know it’s wicked slick and can pull some cool tricks. All the fittings are brass and copper, with copper-plated hardware and pickups, gauges, gears, pipes, welds, and a bucket of fake rust. Cyberpunks, musicians, geeks who surf from the chair, many of us heard tales of the dastardly looking Villianizer long ago. It’s still sweet though. But how does it sound?

Have a listen to The Villianizer. 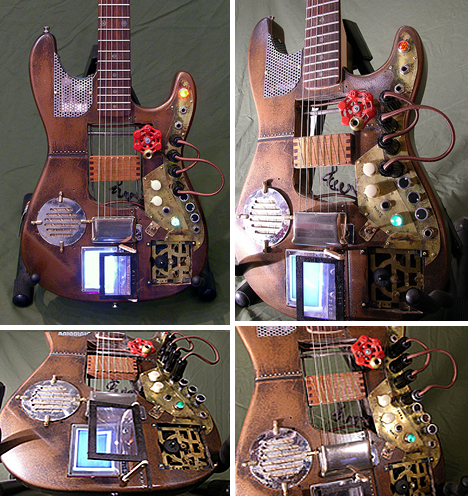 This custom steampunk guitar, Organum Insolitus, was built for the 2008 Jersey City Artists Studio Tour. Designed using elements of steampunk, Organum Insolitus incorporates clockwork gears, hand hammered brass, cloth wire and wood to show an alternate historical glimpse of a 19th century electric guitar. The guitar features a television with Fresnel lens magnifier, an onboard phaser and amplifier. Rather than use multiple pickups, the one humbucker can be repositioned with the red faucet handle. The television, guitar, effects and amplifier can all be patched through to each other in any configuration using the patch bay on the front of the guitar. The pickup or television can also be outputted through a standard 1/4″ cable to an external amplifier. 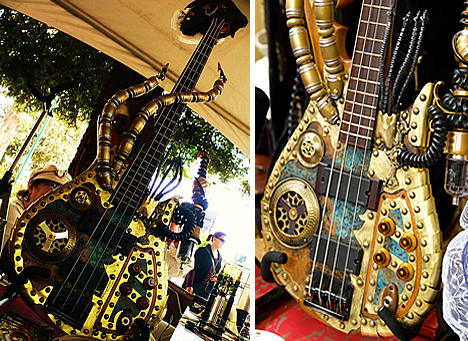 This handcrafted masterpiece, The Elder Bass Guitar, was created by Molly “Porkshanks” Friedrich. Porkshanks writes, “I am honored to have been involved with creating art for the bands Abney Park, Mungus, The Georgetown Orbits, and musician Michael ‘Creature.’ Steampunk creators that you know best.” She is also a featured artist at the Museum Exhibition of Steampunk Art, which recently opened and will run continually through February 21, 2010. 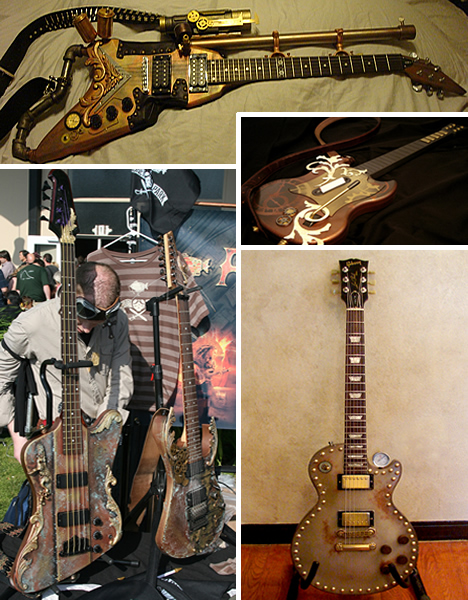 The beloved musical weaponized beast at the top is named the Victorian Axe Cannon. On the top right is the Steampunk Hero. From Maker Faire 2008, and pictured on the bottom left are two more steampunk guitars. The Les Paul on the bottom right was tweaked and modded with gauges, copper, brass and rust into an aesthetically pleasing steampunk-style guitar. 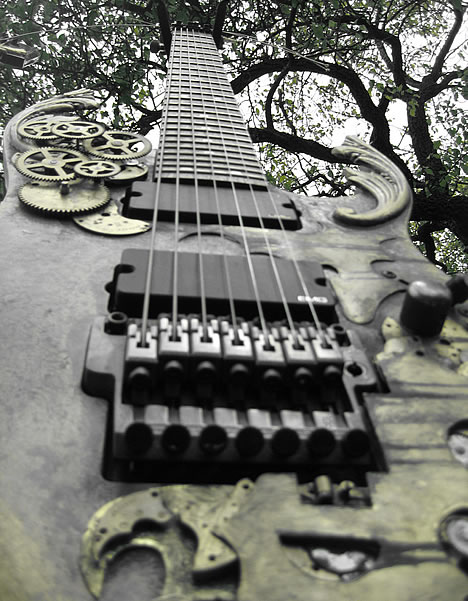 What we like or don’t like is all about personal point of view. Here is another guitar created with gears and steampunk bling. It was on display at Maker Faire, snapped at this angle to give you a different perspective. Maker Faire is an amazing event where engineering savvy and childlike whimsy overlap as scores of techies, crafters, artists, and visionaries gather in an imaginative playground. Tinkerers and backyard experimenters interact in a massive show-and-tell and do-it-yourself steampunk extravaganza. 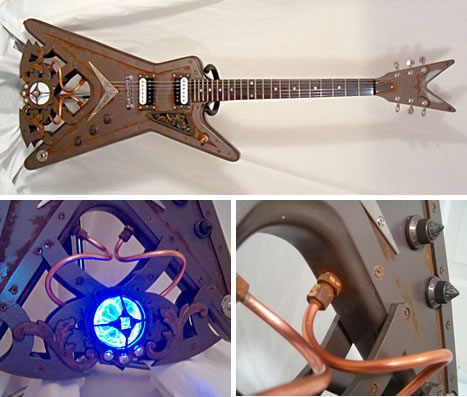 This modded masterpiece, The Nautilus, was inspired by the film 20,000 Leagues Under the Sea. The retrofuturistic design of the Nautilus includes copper pipes, shell topped knobs, and a cool flickering plasma effect porthole at its base. Sadly, the creator had to part with his creation. This custom built steampunk guitar gained public attention when it was sold on Ebay.

Here is the The Nautilus in action. 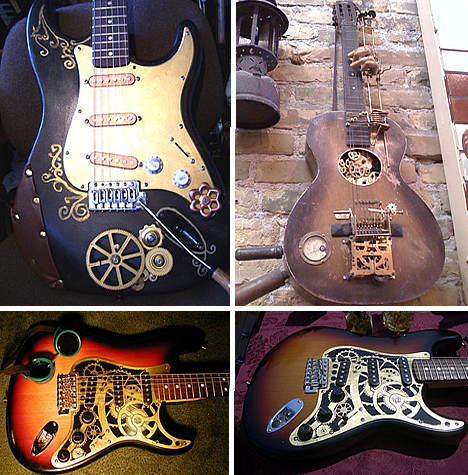 Steampunk is popular with people in the punk, goth, Industrial, cybergoth, gamer, and geek subcultures. So popular, in fact, there is a growing movement towards steampunk as a lifestyle and culture. It has been around in other forms and other names since the sci-fi subgenre of Jules Verne and H.G. Wells. Here are more guitars with a Neo-Victorianism theme. Pictured at top left is The Blackwind. The top right steampunk guitar can be found on display outside a shop in Austin, Texas. The two steampunk guitars on the bottom are re-engineered Statocasters made for Maker Faire. 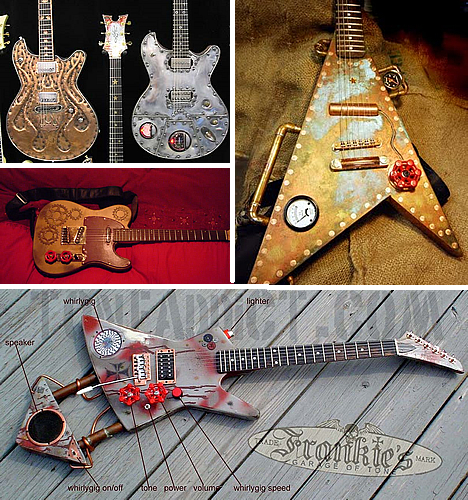 If you have a passion for guitars and music, then perhaps you too would like to get in on the action with a DIY steampunk guitar. The top left guitars are metal clad and steampunked by their creator to his degree of satisfaction. In the top right photo, you see a steampunk pipebomb guitar heart made with a Basswood body, patina paint, hardware, and surplus store supplies all over it. On the middle left, cyberpunk and rebellion produced this Steampunk guitar. The bottom guitar was built by one friend for another, both steampunk fans. Each guitar is a one-of-a-kind creation and there is still plenty of time before the holidays to DIY a steampunk guitar for you or a loved one. 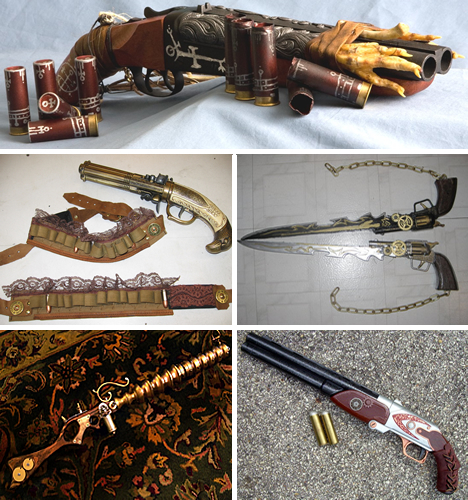 If you are into guns, then you will probably love these. If not, then think sci-fi blended with the Victorian era. The sawed-off shotgun is from Steamgearlab, a Lilith shotgun and prop for a steampunk movie. On the top left, this little weapon is meant to represent Burlesque Steampunk or Apocalyptic bullet belt garters. On the right are gunblades, a style of gun often found in the steampunk culture. The bottom left photo is of a steampunk sonic rifle. On the bottom right, the Howdah pistol was produced by sawing the stock off a shotgun, then more or less of a hack job to the barrel. 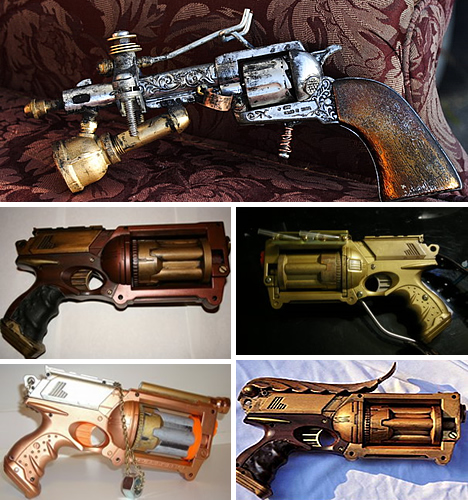 All of the guns above are considered steampunk-style revolvers or pistols. From the retrofuturistic outlaw pistol to the the gentleman’s revolver, the only limit to creating these steampunk props are your imagination. Get ready to shoot ’em up like a cowboy from the past time-traveling to the future. Although not steam-powered, these weapons may be powered by the souls of the enemies you cut down. Watch out for steampunk enthusiasts, whether with a stone cold heart of ice or just having some good ole-fashioned fun, who could draw and “shoot” in a blink of an eye. 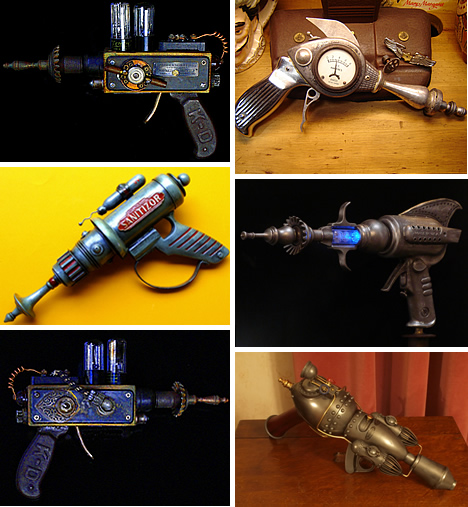 If you like retrofuturistic sidearms, check out these ray guns. Tinkerbot seems an expert in pure Jules Verne creations, making weapons for an imaginary universe. Some of these collectible fantasy weapons include the Zenith which would take only one electro blast for piercing destruction. On the top right, wow, the toggle switch, gauges and other little gizmows from an old lamp would make short work of your enemies. Or lock and load the Sanitzer. Not sure what kind of death follows after a ray coming from the Pneumatic Aether Disperser, but it’s probably not a pretty sight. Herr Dokters created the bottom right ray gun and some of his other creations are to be on display at the Museum of Oxford Steampunk Art Exhibition. 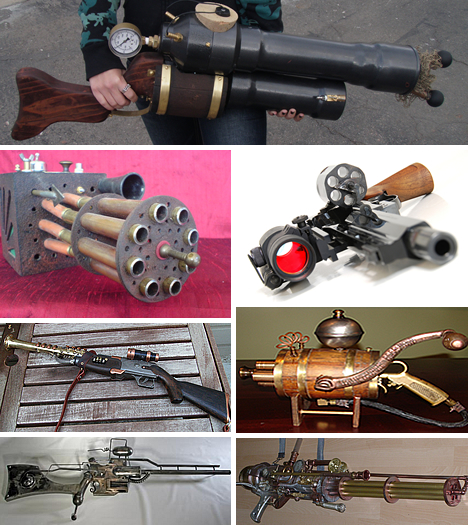 Beware scoundrels and villians! From left to right, all of these steampunk guns are seriously wicked weapons, like the top Pirate Net Gun. Do not tick off the owner of Viper, a pneumatic machine gun. What mechanically inclined and avid pistoleer wouldn’t mind the fine company of a refined automatic revolver with an old world charm like the Mateba Unica? The Blunderbassoon has a forty watt range and is a weapon from a more civilized age. The large barrel is a single barrel N2O Blunderbuss. Whether or not you can tell from the bottom left photo, this steampunk sculpture art is a metal rifle ray gun that is 36″ long and 13.5″ tall. But it was the Annihilator that ranked as the judge’s favorite choice of shoulderarm with it’s indicator light and a range of over 550 meters. 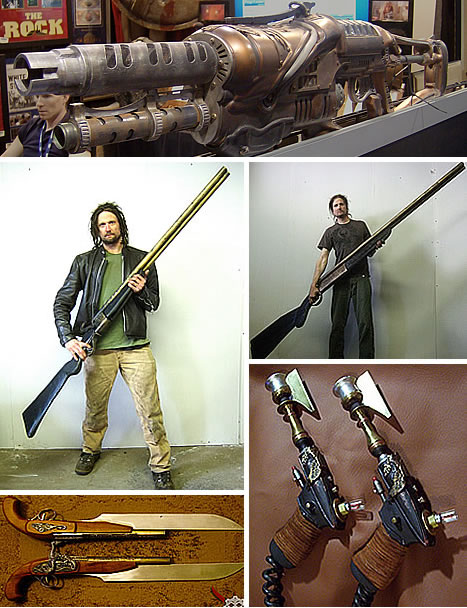 If you run across a steampunk enthusiast with one of these guns, be prepared to surrender or to die! The photo on top is a massive steampunk ray gun. It’s unknown if the owner has it setup as a steampunk prop or as a working secret weapon. The top left picture is of the Double Twelve. It’s 10 feet long and a .12 gauge even if it appears to be capable of shooting planes out of the sky. The steampunk shotgun on the right weighs in at 65 pounds! Sure the enemy would be dead, if you could heft that sucker and fire it in time. On the bottom left are shiny and classy steampunk Flintlock Saber pistols.  On the bottom right, Deuces Wild are a destructive set of twins named Veracity and Florencia.

Indeed, steampunk culture and art seems to be everywhere. We hope you enjoyed these sexy as sin steampunk guns -n- gutars.