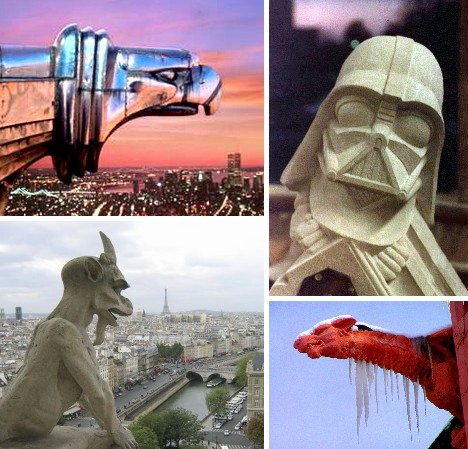 If the words “gargle” and “gargoyle” sound similar that’s no coincidence, but from their original function as decorative downspouts gargoyles have evolved into whimsically sculptured, cathedral dwelling creatures who often look evil but whose purpose is to do good. 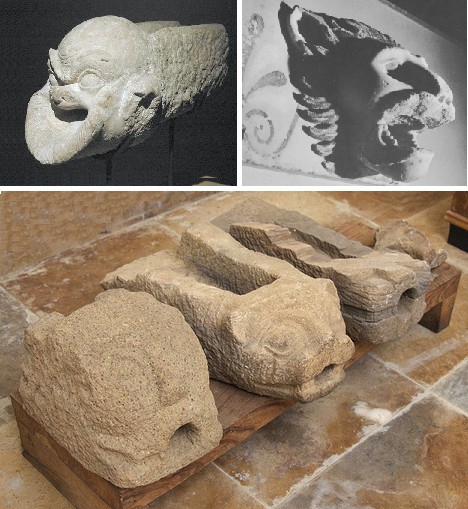 (images via: Livius, Under the Gargoyle and A.Davey)

Reminiscent of classically inspired lion-headed faucets, the ancient gargoyles above display the openings through which rainwater poured. The purpose of the heads was purely practical at first: keep water that fell onto a building’s roof from coursing down its sides and undermining the foundations. The gargoyles above hail (clockwise from above left) from Ai Khanoum in Afghanistan, ancient Greece and Axum in Ethiopia. 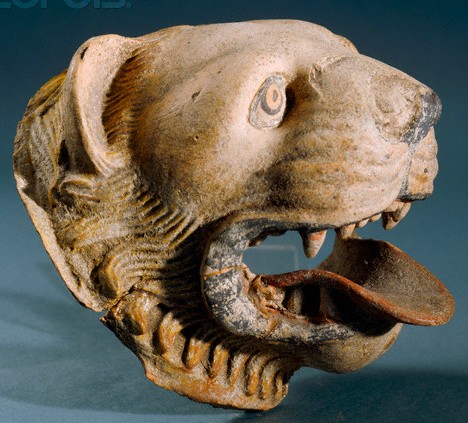 They may have helped the buildings upon which they were mounted but pity the poor townspeople for whom every rainy day became a walk in the waterpark. The majestic, lion-head gargoyle above once directed rainwater from a corner of an ancient Greek temple’s roof. 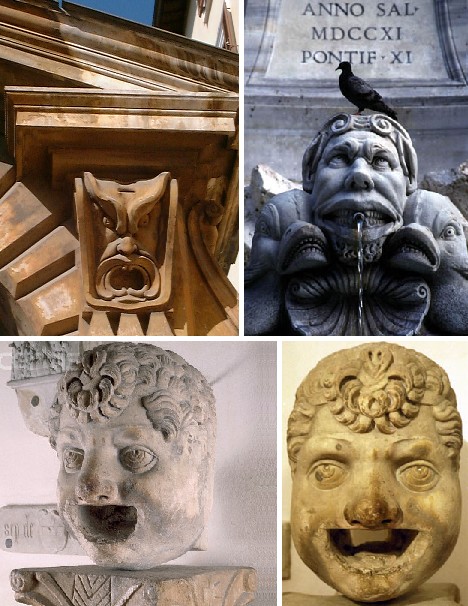 (images via: Jeff Cook, The Luminous Landscape and Degenerate Press)

In the time of the Roman Empire gargoyles began to be built with lead pipes inside to channel water without eroding the stone. It was an effective innovation, as can be attested to by the many gargoyles still performing their functions atop Roman temples 2,000 years or more after they were built. 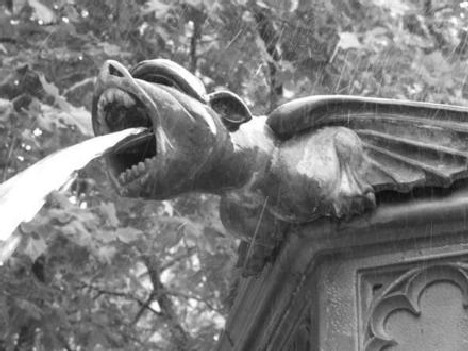 (image via: Grows On You)

Like so many innovations pioneered or perfected by the Romans, gargoyles are popularly used today to give a distinctive look to fountains and other water sculptures that don’t need rain to let it shine. 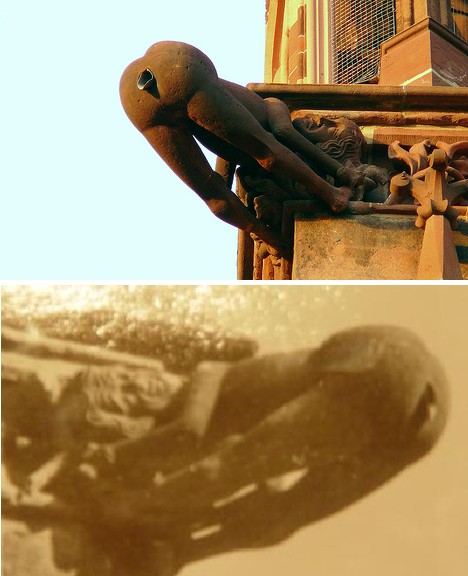 Sometimes gargoyles take on unusual forms that seem out of place with their usual locations – on places of worship. Take the pair of mooning gargoyles above from Germany (top) and England. Some say that these types of gargoyles were “aimed” at competing buildings or in the case of the German one, a government office across the street. 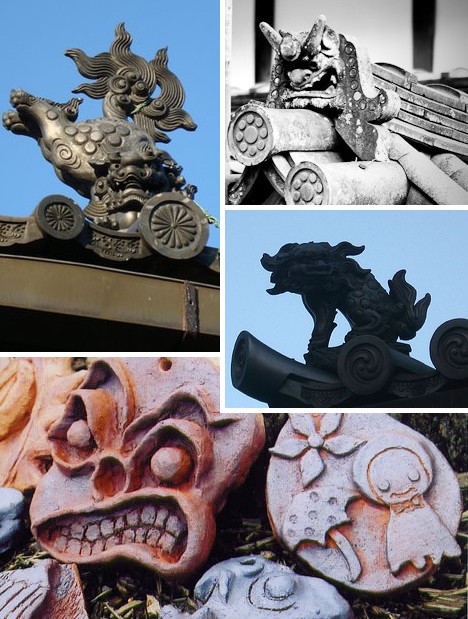 Gargoyle etymology breaks gargoyles down into three occasionally overlapping formats: gargoyles that drain water, “grotesques” that are sculptures, and chimeras which are unusual representations of non-existent creatures. The onigawara figures that appear on the tops of medieval Japanese castles, temples and old houses are in a class of their own, however, and at some locations are covered in gold leaf. 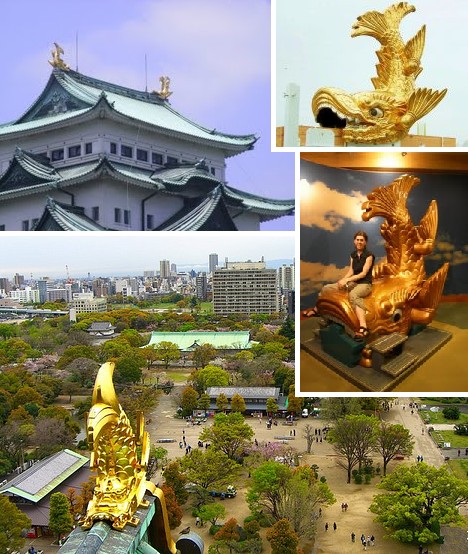 (images via: Wikipedia and Tsubu Gai)

The most famous Japanese gargoyles are shachihoko: gold-plated, tiger-headed carp that were placed in pairs atop the country’s most important castles to protect them from fire. Shachihoko are often quite large and although valuable, would be very difficult to steal. They’re popular tourist attractions on the rare occasions they are taken down for cleaning. 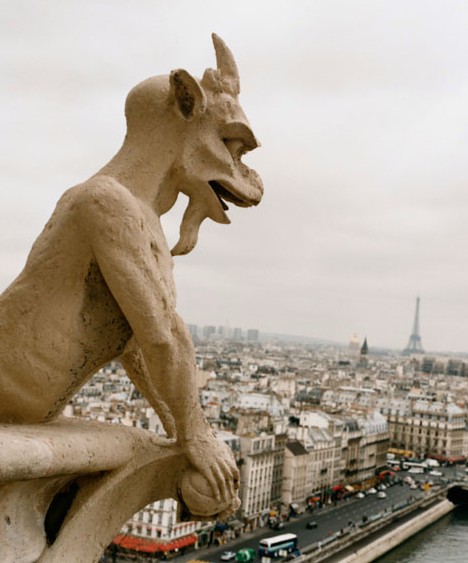 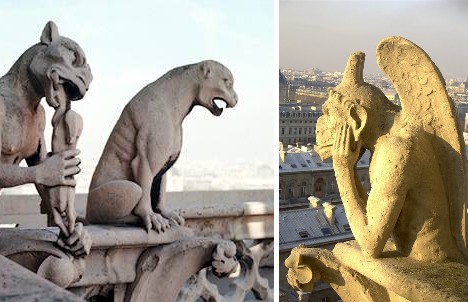 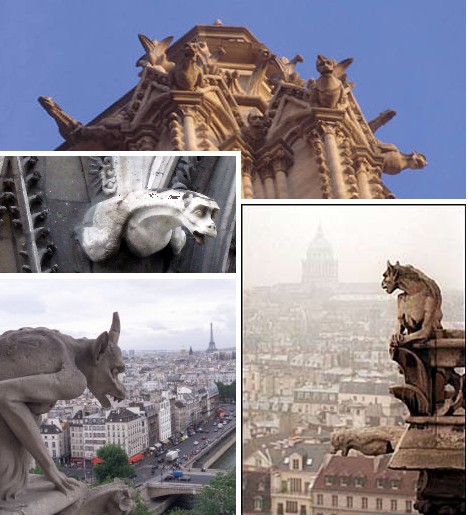 (images via: Finazzo, Stonecarver and Raingod)

With Paris’s Notre Dame Cathedral, gargoyle sculpture reached its zenith of artistic beauty and laid the basis for centuries of gargoyle legends and lore. Technically “grotesques” and not pure gargoyles, the many mythical creatures crafted to guard over Notre Dame de Paris are favored subjects of photographers as they glare darkly over the City Of Light. Although extensively restored, the building and its trademark gargoyles looks much like it did upon the completion of its initial construction in the year 1345. 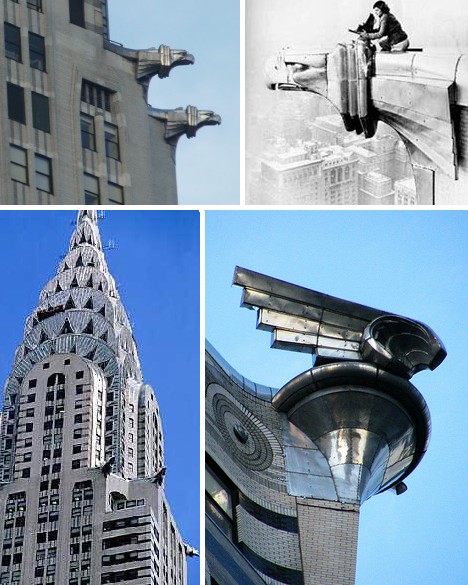 Completed on May 28, 1930 after only two years of construction, New York City’s Chrysler Building stands as a beacon of modernity and a celebration of American capitalism. With that said, the building harkens back to historic cathedrals with its set of amazing gargoyles. 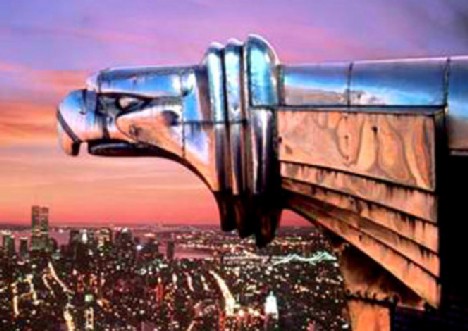 William Van Alen designed the Chrysler Building and its iconic gargoyles, one of which is shown above. This spectacular Art Deco eagle – modeled after the hood ornaments used on 1929 Chrysler cars – gleams in stainless steel and looks out over New York City from the Chrysler Building’s 61st floor. 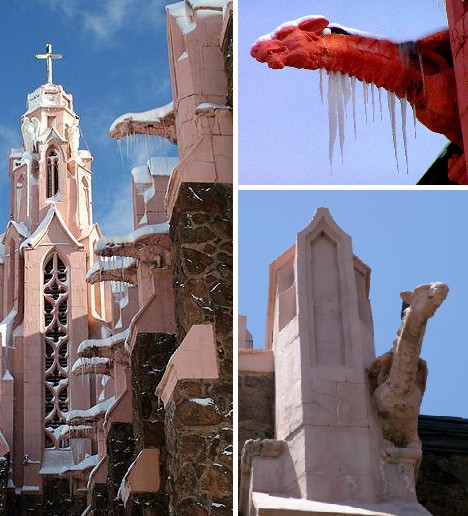 (images via: Copperdragon and Photographers Direct)

The Nativity of the Blessed Virgin Mary church in Flagstaff, Arizona, is a little touch of Gothic charm in America’s desert southwest. The many gargoyles learing out from the church’s walls take on an especially grim appearance on mornings after the city is blasted by winter weather, causing icicles to grow on the already spiky figures. 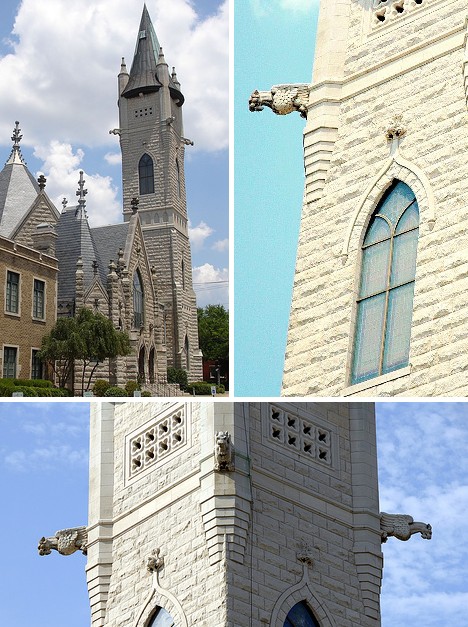 Gothic architecture in Alabama? It’s more likely than you think. The First Baptist Church on Lauderdale Street in Selma, Alabama, boasts an interesting group of gargoyles leaning out from the church tower’s four corners. 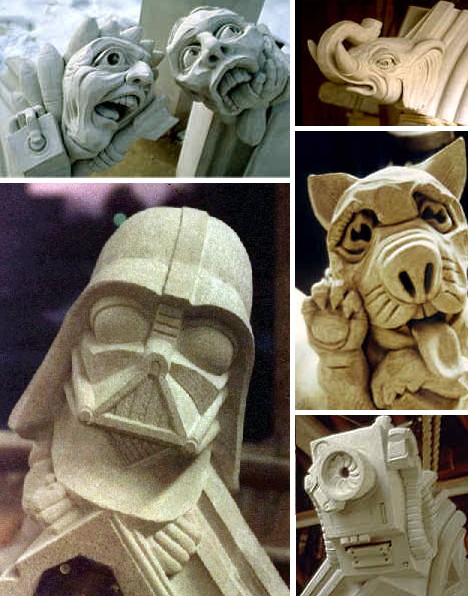 (images via: Stonecarver and io9)

The National Cathedral in Washington D.C. looks much like any of Europe’s great historic cathedrals from a distance, but up close the visitor is in for a surprise. The cathedral’s gargoyles memorialize a mix of archetypal American imagery with pop culture cues that will fill many with Shock and awe. Perhaps the most famous of the cathedral’s many interesting gargoyles is one chilling figure carved to resemble Star Wars’ penultimate villain, Darth Vader.

Carved in stone or cast in metal, the many gargoyles, grotesques and chimeras perched menacingly on the world’s great buildings never fail to evoke emotions ranging from joy to hope to fear and even terror. It’s a good thing they’re inanimate, isn’t it?