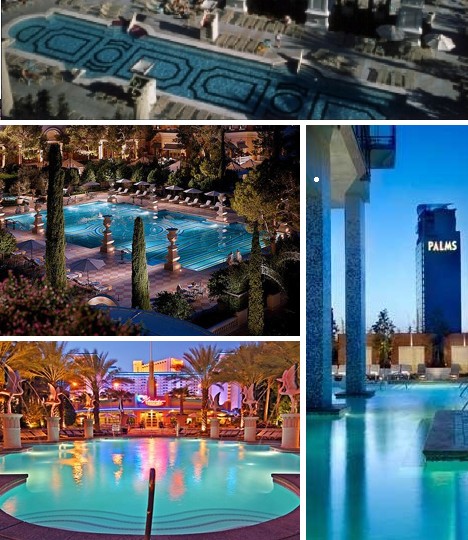 What happens in Vegas, stays in Vegas? No longer! Sin City’s magnificent makeover has been a boon for vacationers seeking the best beyond just the bets. Las Vegas’ host of hotels have helped make the gambling mecca a true desert oasis and the party starts in the pool. 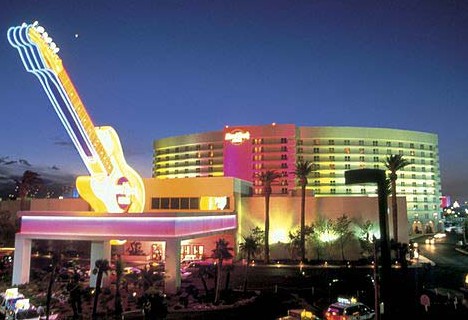 (image via: Essential Style For Men) 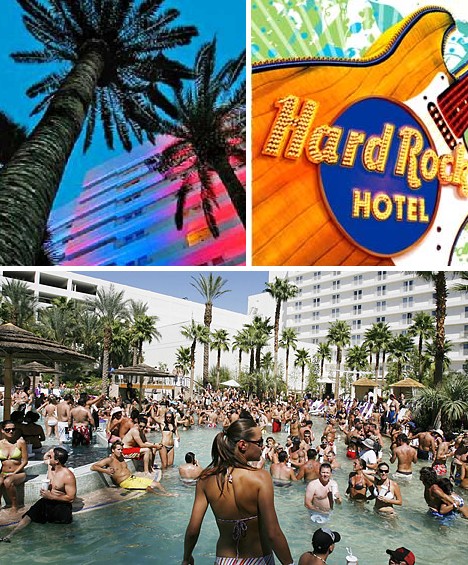 (images via: Venere and Travelrag) 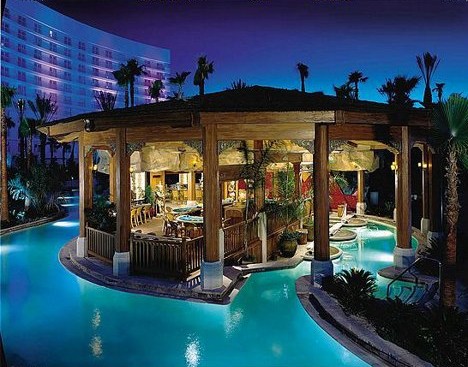 Whoever designed the pool at the Las Vegas Hard Rock Hotel must have been given a blank check and as much real estate as they needed, as the pool complex is practically its own ecosystem. Surrounded by faux mountains and featuring meandering rivers, sandy beaches and hot tubs manned by blackjack dealers, this is a Pool with a capital P! The wet wonderland really shifts into high gear every Sunday from 11AM through 7PM as partygoers flock to the Rehab Pool Party. After a day at Rehab, you’ll probably need… more rehab.

Caesars Palace: Garden of the Gods 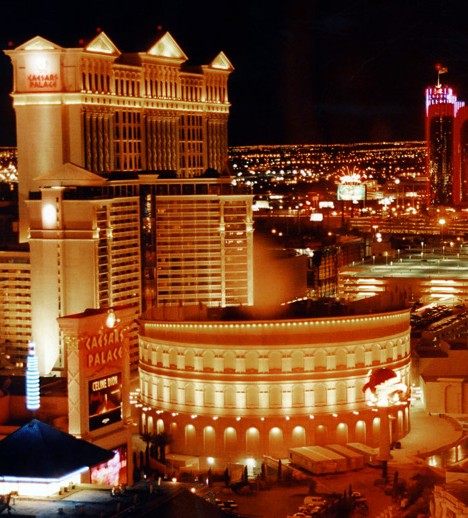 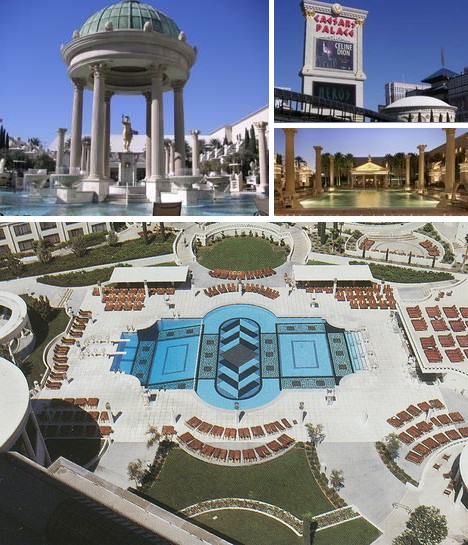 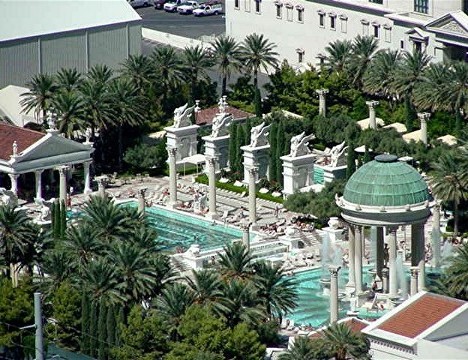 Hail Caesar! Caesars, actually, where the Palace grounds feature a sextet of spectacular pools grouped in a luxuriant oasis known as the Garden of the Gods. Roman emperors would be quite at home in the Garden of the Gods, though they might not know what to make of the iPod docks, wireless Internet and flat screen TVs that make the cabanas true homes away from Rome. Even Nero would give the Garden of the Gods oasis at Caesars Palace Las Vegas a big thumbs up. 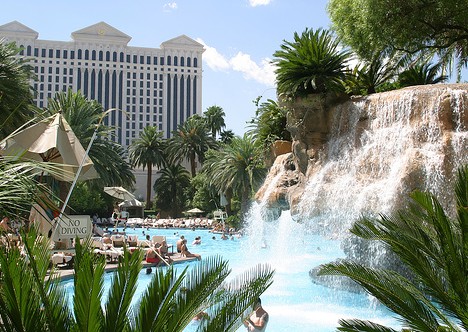 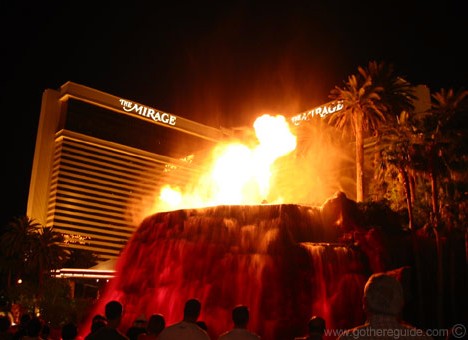 (image via: Go There Guide)

No fancy name required; the pool at the Mirage Las Vegas stands on its own. Just be sure you don’t mistake the huge aquarium behind the reception desk for the pool – the nearly one hundred species of fish including sharks, stingrays and pufferfish who populate it may not take kindly to your intrusion. The real pool – pools actually, as several discrete artificial lagoons interconnnect with one another – lies within an elaborately constructed rainforest replete with a cascading waterfall, lush gardens, even a dolphin habitat. 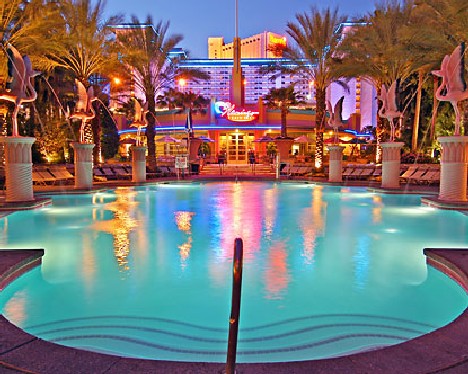 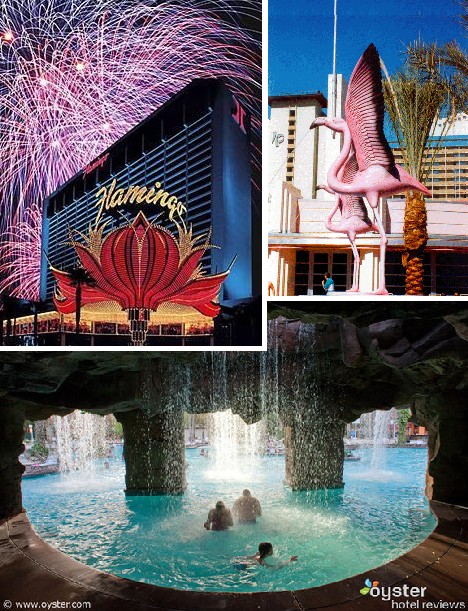 (images via: Hotels Feel and Oyster)

The Flamingo Las Vegas recently renovated their pool and as a Sin City sunbathing center the new Go Pool has few rivals. Sprawling over 15 acres, the pool complex offers guests sheltered grottos, shading palm trees and soothing music from live DJs. The Go Pool happily accommodates the new wave of “European Style” (topless) vacationers as well: the exclusive upper deck is reserved for those who dare to go bare. One of the Go Pool’s favorite features are the fully equipped cabanas providing a host of services and amenities including a television, mini fridge, bottle service, even a personal host to cater to your every whim. 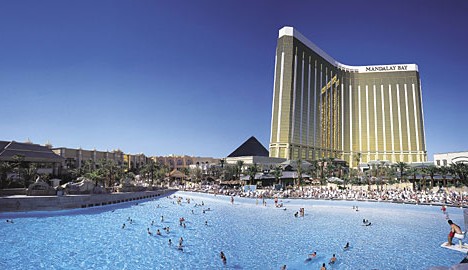 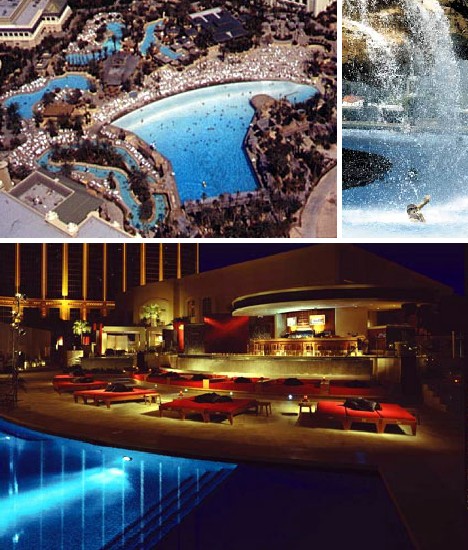 At the Mandalay Bay Resort & Casino, a climate controlled beach-side casino helps keep gamblers cool when the chips are down but that’s only one part of what the Mandalay Bay Beach complex offers. A full 11 acres of pools and lagoons containing 1.6 million gallons of water and tons of real beach sand combine to create a “beach environment” served by over 100 rental cabanas, decadent daybeds and even full fledged villas. Among the various types of pools in the complex is a huge wave pool big enough to accommodate body-boarders. 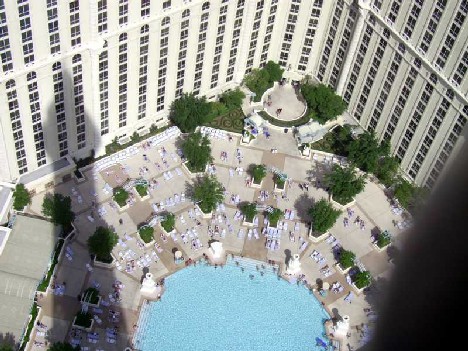 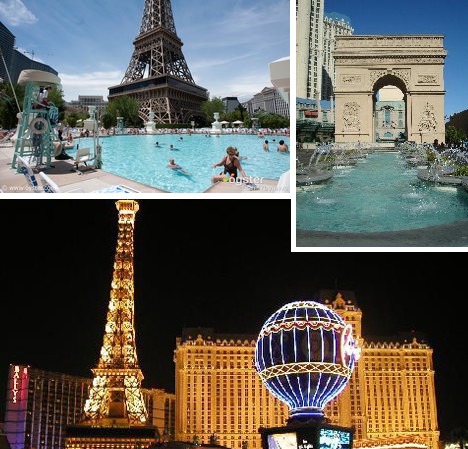 The pool at the Paris Las Vegas Hotel lies in the shadow of the Eiffel Tower and the huge hot air balloon out front – maybe not the best sun-worshippers could hope for but an outstanding view in its own right. Roughly circular and occupying a full 2 acres of space, the pool offers spacious surroundings and scads of lounge chairs from which to take in the incongruous sight of Paris rising from the desert sands. One wonders what actual French tourists think of the setting. 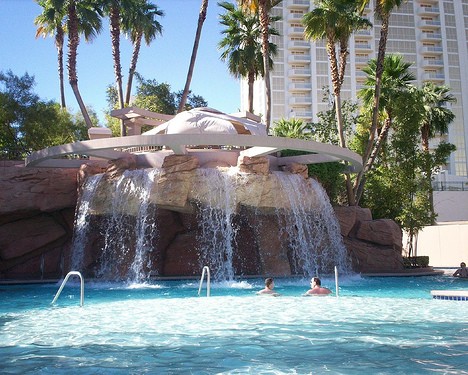 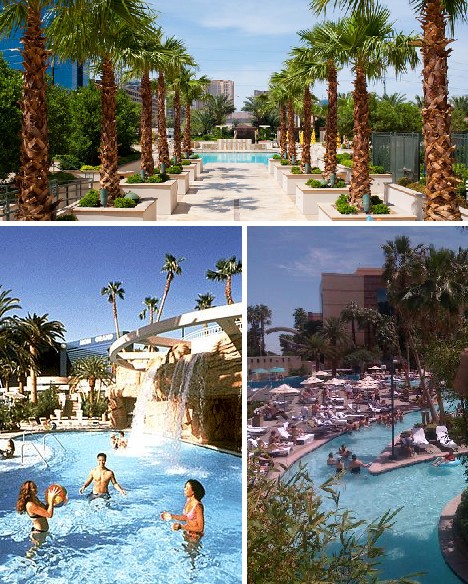 (images via: Oyster and Trip Advisor)

Imagine floating down an 8,000 ft long lazy river in an inner tube, stopping at 5 bars along the way while tropical palm trees provide welcome shade from the brilliant sun. Reality then takes up where imagination leaves off. the Grand Pool Complex at the MGM Grand includes, besides the aforementioned lazy river and bars, 4 pools and 3 jacuzzis. One interesting feature of the complex is the Wet Republic which features 2 saltwater pools and an outdoor lounge/bar. Grand indeed! For those who prefer to take Las Vegas on their own terms – and slip away to peace and quiet when they choose – The Signature towers provide guests with the very best service in a comfortable condo-style atmosphere. 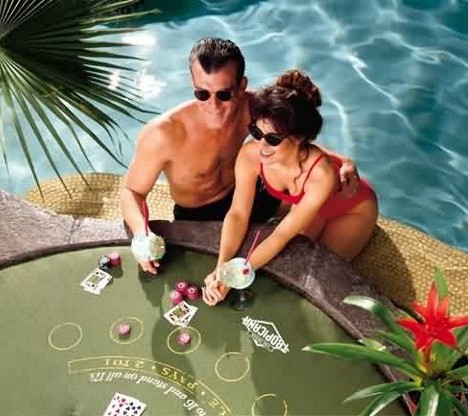 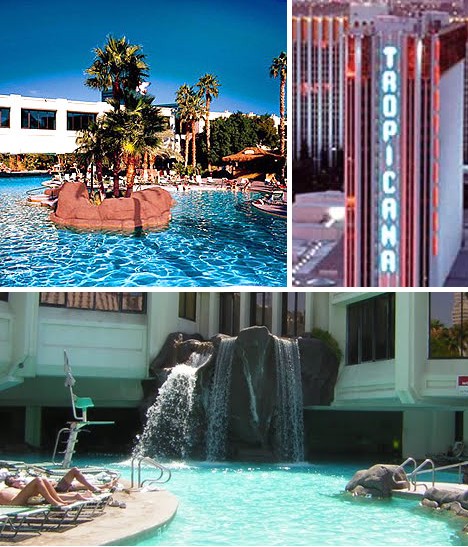 (images via: Quik Book and Cristina)

The Tropicana was the first Las Vegas hotel to offer in-pool gambling and this classy innovator is a favorite stop for many Vegas veterans. The Trop’ is also a leader in casino pool design and most of the Strip’s larger hotels have copied its verdant rainforest themed pool complex and its many fountains, waterfalls and grottos. Knowing the history of the Tropicana and its constant drive to be on the leading edge of Las Vegas pool design, it will be interesting to see what the owners have in store for April of 2010, when the currently closed and under construction pool complex is revealed !

Pools At The Palms Casino Resort 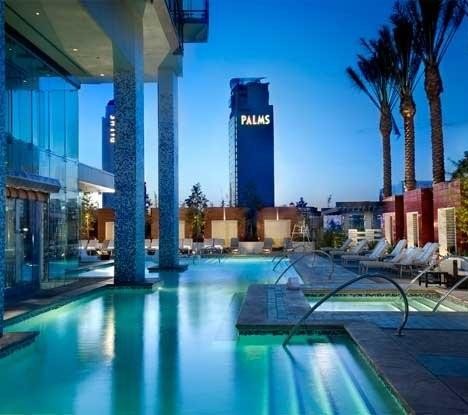 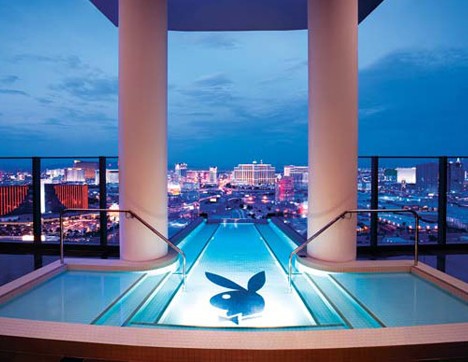 One of the more luxurious Las Vegas hotels – and that’s saying something – The Palms features a number of pool options to thrill the most jaded of travelers. The sixth floor pool just outside Simon’s Restaurant & Lounge offers a serene and peaceful pool getaway while at the upper end, the $40,000 per night Hugh Hefner Sky Villa atop the Tower of Palms Casino Resort features an indoor pool with an attached outdoor Jacuzzi that overlooks the Las Vegas Strip. 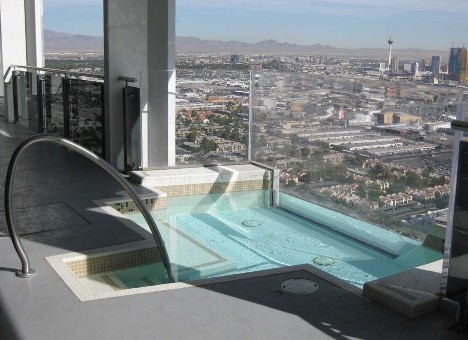 At The Palms, you don’t have to be Hugh to have a pool with a view: the penthouse suites at The Palms have hot tubs built-in to the balconies. Wouldn’t the steam fog up the window glass? It would be great to find out!

Pools At The Bellagio 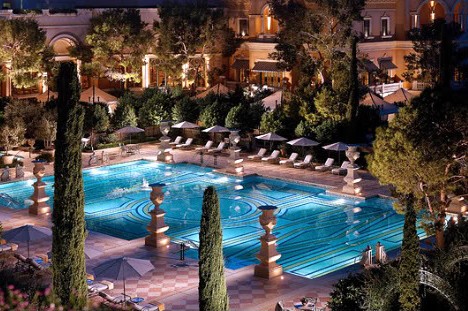 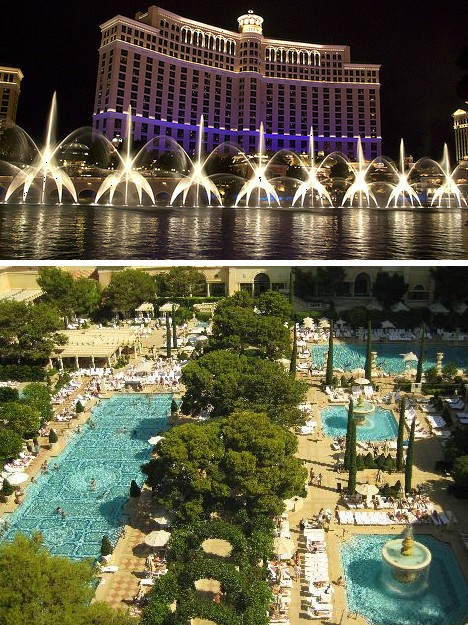 One of Las Vegas’ most elegant hotels and famed for its fantastic fountains, the Bellagio offers swim fans a five-fold treat with a quintet of luxurious pools. Those with “snow white syndrome” need not fear: each pool is maintained at a slightly different water temperature. The pools at the Bellagio also evoke different moods and cultures. Take the Tuscan Villa Pool at above top; it features lush greenery, integral fountains and even misting fans to add, er, mystery. 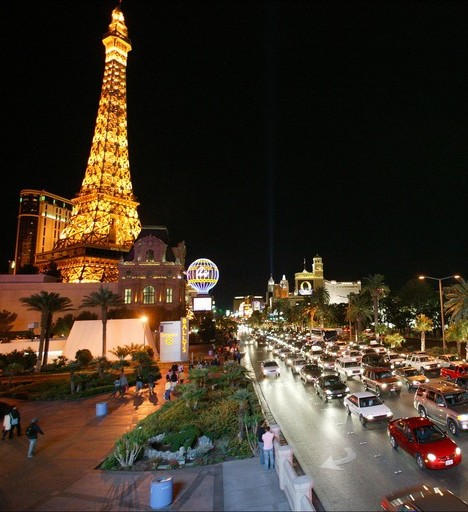 Perhaps the most amazing thing about these heavenly pools is the fact that they, and the city of Las Vegas, are situated in the midst of a searingly hot and dry desert. Where are the hotels finding the tens of millions of gallons of water needed to keep these symbols of conspicuous consumption afloat? Certainly these are thoughts worth considering… as one orders up another pina colada from the poolside bar.