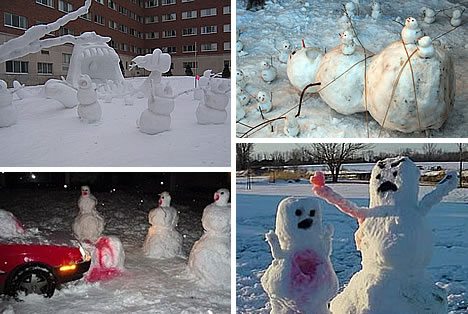 If you are not a fan of Calvin and Hobbes, a comic strip written and illustrated by Bill Watterson, then you may not know that Calvin was an imaginative little boy who created snowmen and put them in scenes that would be straight out of a snowman’s nightmare. Little Calvin would have the snowmen in scenes where the snowmen would die horrible, mostly painful, deaths. For ten winters, Calvin and Hobbes created entire worlds of snowmen living or dying in unhappily ever after ways. Here are some of the best snowmen nightmares, where fans of the comic strip created tributes to Calvin and Hobbes snowmen in real life. 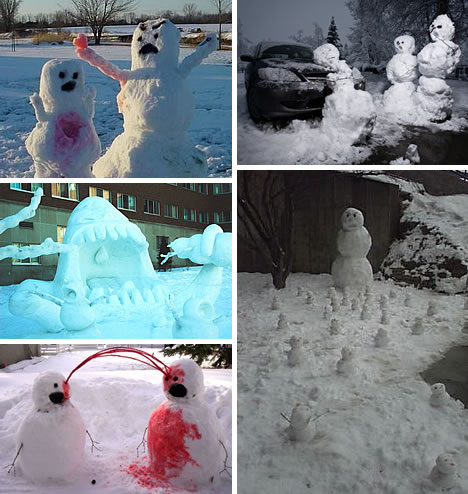 If you decide to build a snowman, then perhaps you should startle your neighbors and people who drive by. The first thing you should know is that the snowman should not be set in a smiling and happily ever after scene. Think along the lines of what would be a snowman’s worst nightmare. If you have a dark sense of humor, then it will be easy. If you need some ideas, take a look at the Calvin and Hobbes comic strips and snowmen below. 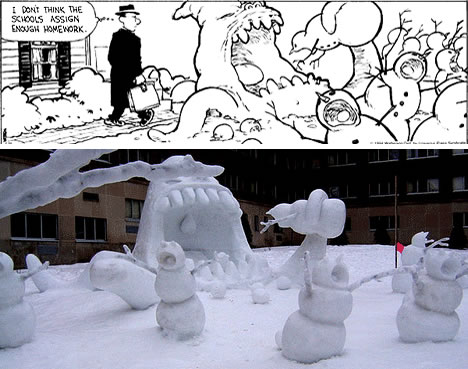 The man-eating snowman is a giant snowman with a huge toothy mouth. Calvin once placed himself in its mouth to create the impression he was being eaten alive. This snow monster above is into cannibalism, catching and eating other snowmen. When Calvin’s dad saw the scene, he said, “I don’t think the schools assign enough homework.”

Repent. The End is Near 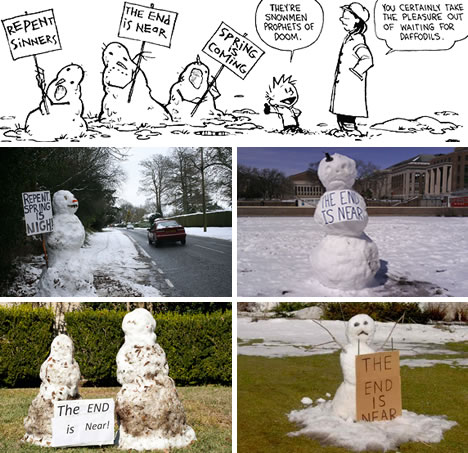 The “Snowmen Prophets of Doom” proclaim that spring is near and the snowmen are melting. Calvin made snowmen and then gave them all signs like,”Repent all sinners,” “The end is near,” and “Spring is coming!” 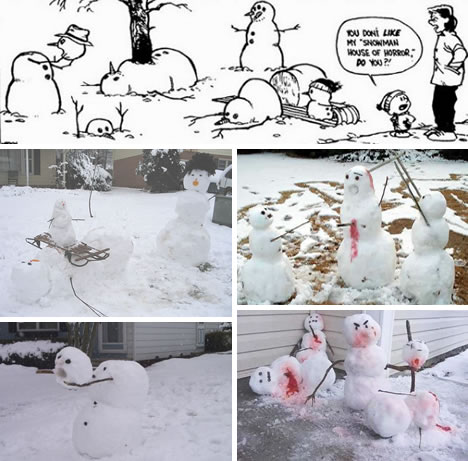 Calvin created many depictions of snowmen in his “Snowman House of Horror.” Among the snowmen created, a specific snowman had been chopped in half with a sled driven by a baby snowman, the horrified headless snowman, and the snowman with a tree staked through its heart. People have gone with this theme, maiming, stabbing, and killing their snow-people. Calvin said to his mother, “You don’t like my snowman house of horror, do you?” 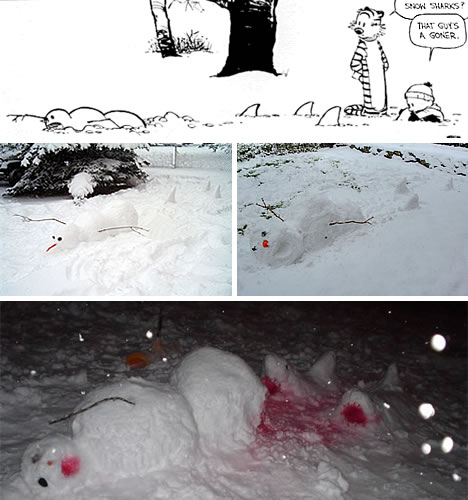 Hobbes asks, “Snow sharks?” Calvin replied, “That guy’s a goner.” Snow snarks have popped up all over the world to eat snowmen since that time. There were also snow snakes, same idea, the snowman is about to die a horrible death. 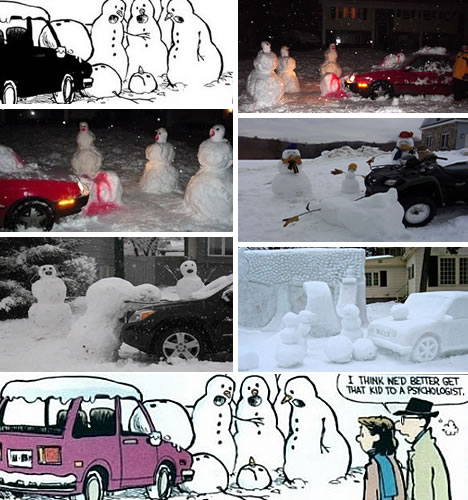 Perhaps the most famous snowman gag involved Dad’s parked car. Several snowmen were are gathered around with their mouths gaping in horror while they look at the trisected body of a snowman “hit” by the car. Dad then stated, “I think we’d better get that kid to a psychologist.” 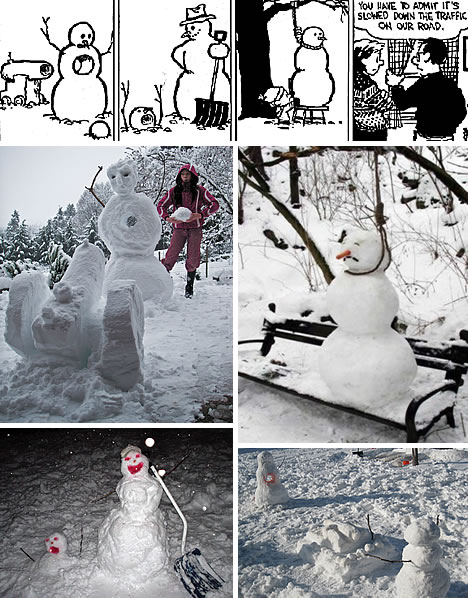 After taking in Calvin’s handiwork where a snowman had been shot with a cannon, one was being buried alive by another snowman, and one suicidal snowman was about to hang itself, Calvin’s dad said, “You have to admit it’s slowed down traffic on our road.” 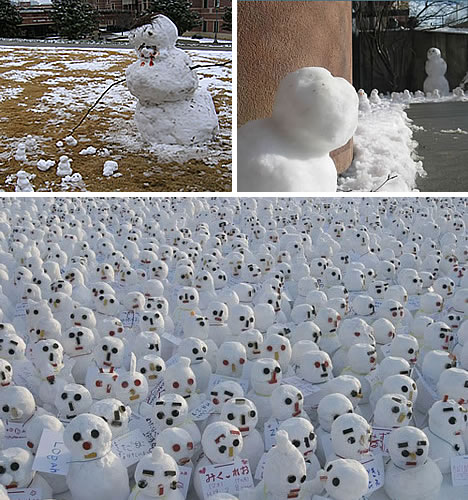 Calvin built many tiny snowmen. Some he crushed while pretending to be a Tyrannosaurus. His tiny snowmen also ran from T-Rex, committed suicide by jumping from Calvin’s bedroom windowsill, and were created simply to grate on his dad’s nerves like the normal-sized snowman yelling at all the little ones. If you want the tiny snowmen to be eaten by a larger one, want to create an entire army of tiny snowmen, or want to create an invasion of tiny snowmen, go for it. You will have fun and people may stop to stare or to take pictures of your winter handiwork.

Suicide or slow painful death, think unhappily ever after 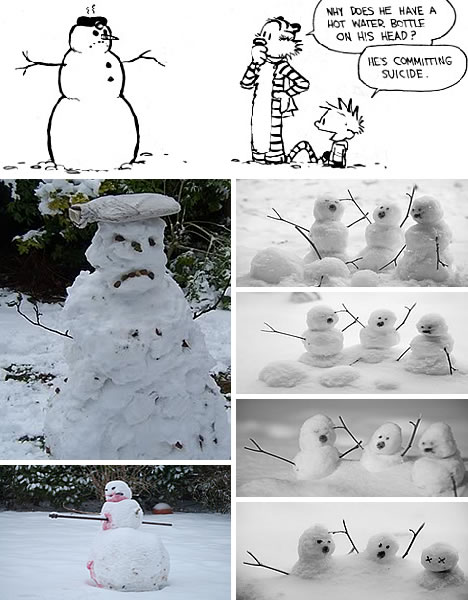 In yet another of Bill Watterson’s comic strips, Hobbes asks, “Why does he have a hot water bottle on his head?” Calvin replied, “He’s committing suicide.” So whether your snowman scene depicts a suicide in progress, snowmen being murdered, eaten, or melted, as long as it ends badly for the snowman, you are embracing the Calvin and Hobbes snowman series. Keep in mind, that is must have an unhappily ever after theme. 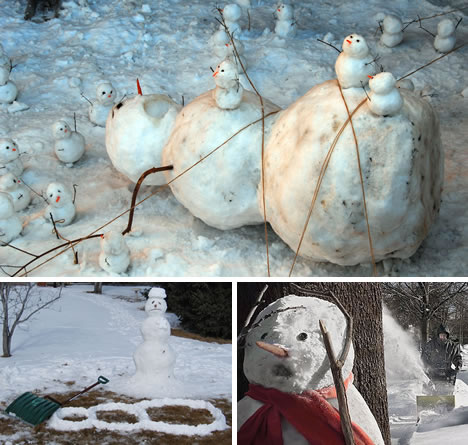 Building a snowman is an environmentally-friendly exercise. In this case, think murder and mayhem to snow-people and you are on the right track. Some people step outside the comic strip box and throw in a dash of CSI. In any case, think Calvin and Hobbes when you next build a snowman. It will keep you laughing through the cold winter blues and keep your neighbors guessing about you.

If you are still stuck without an idea of what a snowman might consider a nightmare, or what the comic strips might mean, look here at snowmen wiki page. Here is a great collection of Calvin and Hobbes comic strips. Have fun with it and show your snowman affection in a funny yet twisted way.