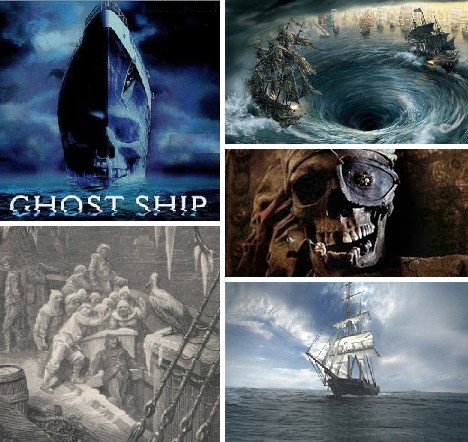 Ghost ships are one of the most enduring legends of the sea, and tales of mysterious ships with missing crews have peppered the accounts of mariners both ancient and modern for hundreds of years. Some ghost ships exist in the realm of rumor, others are real but remain unexplained.

The Rime of the Ancient Mariner 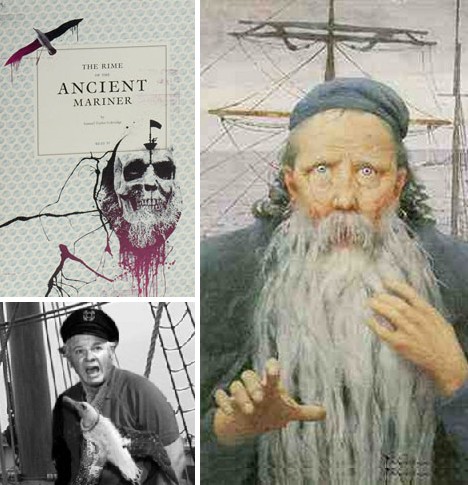 (images via: Pentagram, Indraz and True/Slant)

English poet Samuel Taylor Coleridge penned The Rime of the Ancient Mariner in 1798, where it anchors the dawning of the Romantic Era of literature. This epic poem centers on a wandering seaman, cursed by the Gods for shooting the albatross had guided his ship and crew out from the clutch of chill antarctic waters. It is from Coleridge’s magnum opus that the old maxim “water, water everywhere, but not a drop to drink” originates. 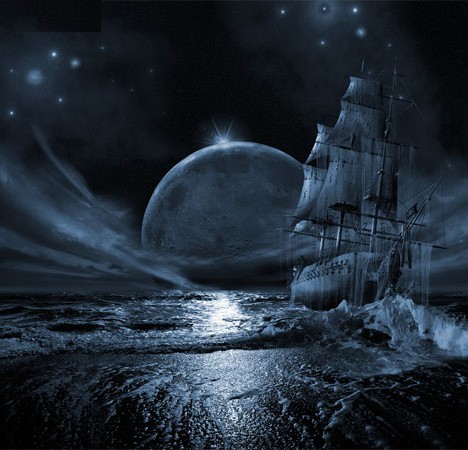 After the Ancient Mariner is forced by his crew to wear the albatross he killed around his neck, his ship encounters a ghostly “skeleton ship” crewed by Death and Nightmare Life-in-Death. The two gamble with dice over the lives of the crew and captain; Death claims the crew while the Ancient Mariner is forced to wander the earth, telling his sorry tale to all he encounters. Kinda makes a three-hour cruise seem insignificant, hmm? 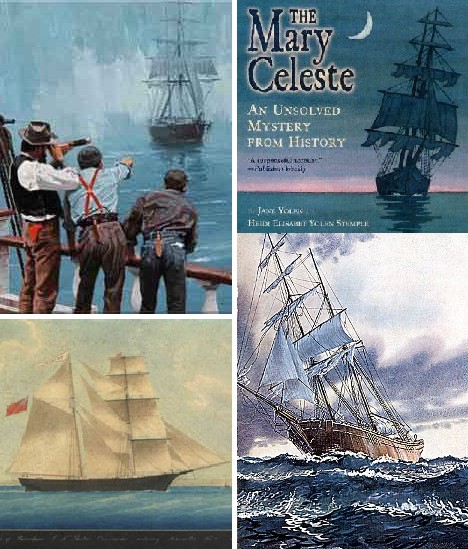 One of the most famous actual ghost ships – “ghostly” at least – is the Mary Celeste. A 282-ton brigantine merchantman built in 1861, the Mary Celeste left New York City on November 5, 1872, on what would be her fateful final voyage. Exactly one month later, sailors on the Dei Gratia spied the Mary Celeste in the eastern Atlantic Ocean heading in the direction of the Strait of Gibraltar. Aside from several torn sails and a missing lifeboat, the ship was in relatively good condition… what it was without, was a captain and crew. 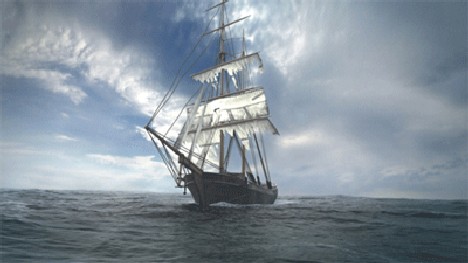 To this day, the exact reason for the disappearance of the Mary Celeste’s compliment is unknown. Theories center on the cargo: 1,701 barrels of commercial alcohol of which 9 barrels were empty. Rumors that hot tea was found in the ship’s galley have been discounted though the Mary Celeste did have a full 6 months worth of food and water aboard when discovered.

Here’s a video showing a segment of a History Channel documentary on the Mary Celeste: 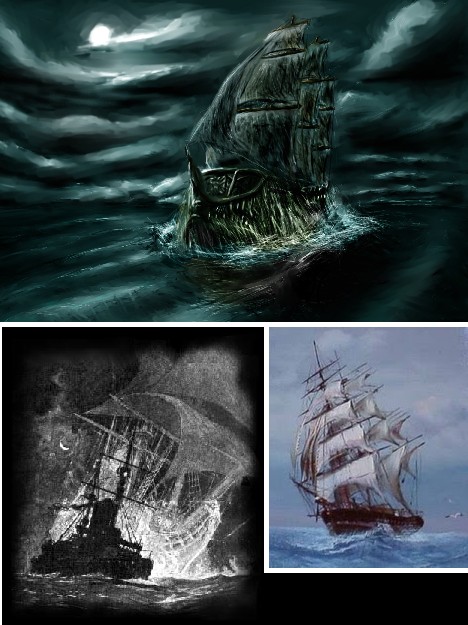 Though it sounds like a name a clipper ship might have, the Flying Dutchman is a colloquial contraction of a Dutch warship, or “man of war” in archaic terms. The story goes, a Dutch East India Company ship rounding the treacherous Cape of Good Hope encountered a severe sudden storm. Rather than head for safe harbor, the captain swore he would maintain his heading until Judgment Day, if necessary. The ship vanished into the storm, never to be seen again… or was it? 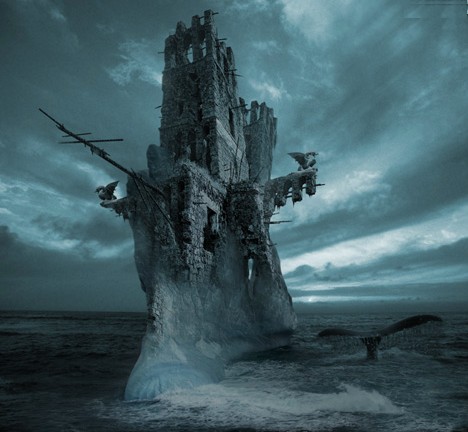 Many have claimed to see the Flying Dutchman, including the future King George V of England while aboard a Royal Navy ship off the coast of Australia in 1881. In describing the unexpected apparition, the young prince noted “A strange red light as of a phantom ship all aglow, in the midst of which light the mast, spars and sails of a brig 200 yards distant stood out in strong relief.” Seeing the Flying Dutchman is not a good thing: according to sailor’s folklore, the appearance of the legendary clipper is an omen of impending doom.

The Carroll A. Deering 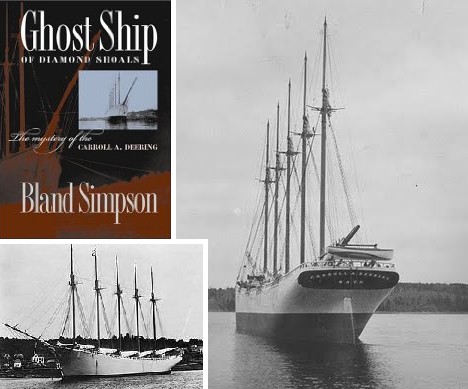 (images via: Bermuda-Triangle.org and Amazon UK)

Think mysterious ghost ships are exclusive to the 19th century? The Carol A. Deering begs to differ. On January 28, 1921, the Cape Lookout Lightship encountered the ship off the North Carolina coast. The large five-masted cargo schooner looked to be in rough shape and had lost both her anchors, according to one of the crewmembers who shouted this information to the lightship. Three days later, the Deering ran aground on Cape Hatteras’ Diamond Shoals with nary a soul aboard. 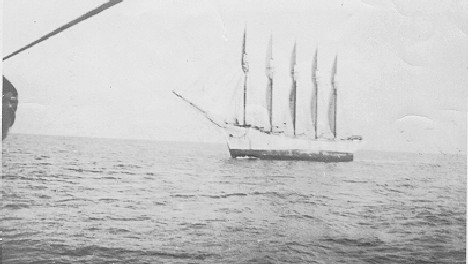 Theories ranging from mutiny to piracy to the paranormal effects of the Bermuda Triangle have been put forth to explain the disappearance of the Carrol A. Deering’s captain and crew but almost 90 years later, the ship’s final days remain shrouded in mystery – as do the fate of the captain and crew, none of which were ever heard from again.

One-Eyed Willie’s Ship from The Goonies 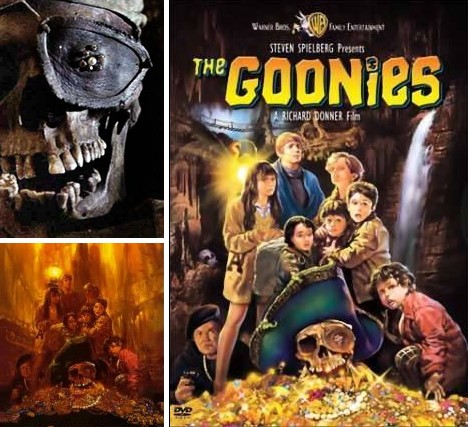 Ghost ships aren’t always mysterious or frightening – just ask The Goonies. One of the best-loved movies of the ’80s, The Goonies featured a group of kids who found an old treasure map and followed it into an amazing adventure full of crooks, treasure and pirates. Especially pirates such as One-Eyed Willie, who guarded his ship and his treasure long after he and his crew had walked the big plank in the sky. 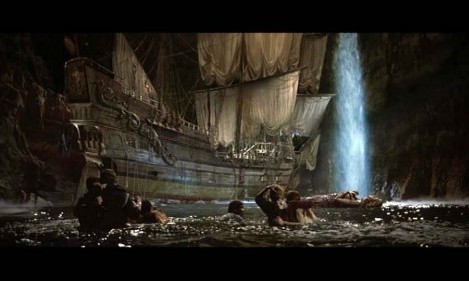 The climactic scene in The Goonies involves the gang escaping from both the evil Fratellis and One-Eyed Willie’s subterranean, booby-trapped ship… which, thanks to the pirate captain’s ancient engineering, sails itself out into the ocean. 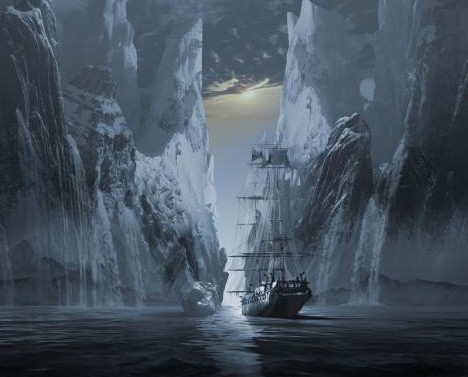 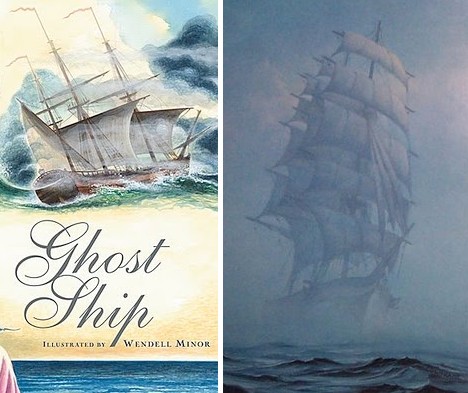 (images via: Gina’s Blogging and Neosurrealismart)

One of the oldest legendary ghost ships is the Octavius. The story goes, the Octavius was set to return to England with a cargo of trade goods from the Far East. The ship’s captain, motivated by greed, decided that the tried & true “round the Horn” route was far too long. His rudimentary maps revealed a more direct route – straight across the fabled Northwest Passage. The key word here is “fabled”. 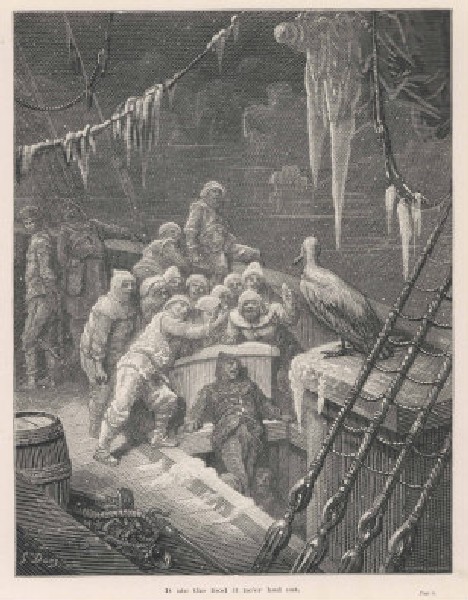 The Octavius wasn’t seen again until October 11th, 1775 when the Herald, and Atlantic whaling ship, came across the Octavius drifting off the coast of Greenland. Sailors from the Herald boarded the Octavius only to find the crew dead and the captain sitting at his desk… frozen solid. The captain was in the midst of writing an entry into the ship’s log dated 1762. Though the Octavius had accomplished the impossible by sailing the Northwest Passage, the captain’s desire for a speedy homecoming was, well, somewhat less successful. 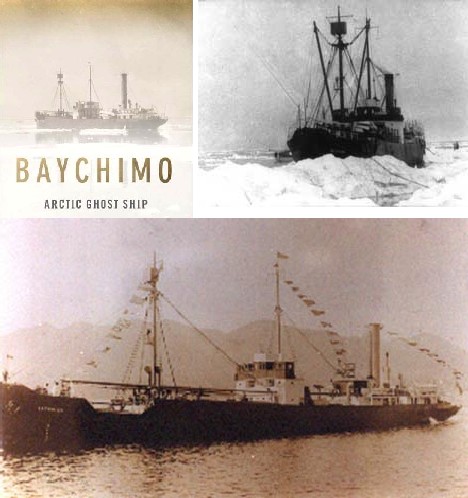 (images via: The Outlaws, EZine Articles and Mult-Kor)

The Baychimo may not be exactly ghostly but its staying power has been nothing short of supernatural. Built in Sweden in 1914 and boasting a steel hull, the Baychimo was perfectly suited for the iceberg studded arctic waters through which it plied its trade: re-supplying the Hudson Bay Company’s far-flung northern outposts. In 1931, however, the Baychimo’s luck ran out as the arctic icepack moved in, locking the hardy steamer in an icy grip. Fearing the ship would be crushed, the captain and crew abandoned her… but the Baychimo didn’t sink, it stayed afloat season in and season out – for decades. 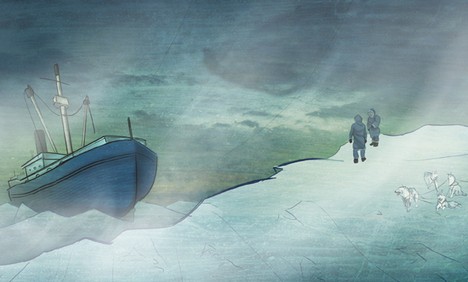 Sightings of the Baychimo were reported at various times and in various places over the years and the ship was even boarded several times in the 1930s. In March of 1962 it was seen drifting in open water along the Beaufort Sea coast and in 1969 it was spotted again, frozen in pack ice. No sightings have been reported since then, so perhaps the Baychimo has finally, as they say, given up the ghost. 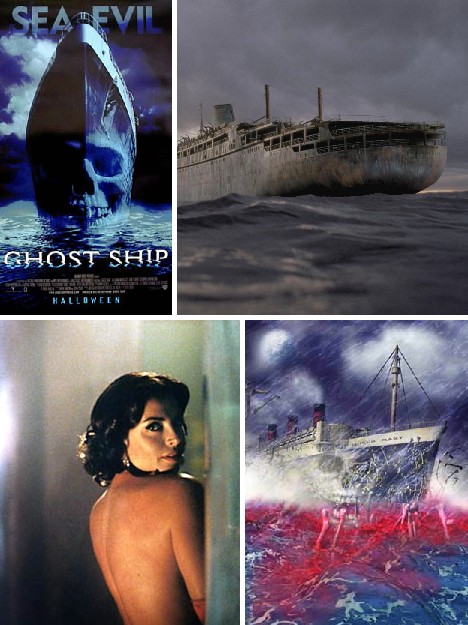 Ghost Ship was a 2002 horror film starring Gabriel Byrne and Julianna Margulies that doesn’t have much to recommend it besides its eerie premise and frightful opening scene (which will not be revealed here). The plot of Ghost Ship, in a nutshell, revolves around an Italian luxury ocean liner that mysteriously vanished in 1962 and, 40 years later, was rediscovered by a commercial salvage ship as it drifted aimlessly in the chilly Bering Sea. 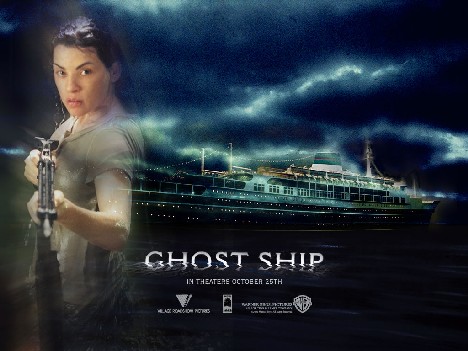 The Antonia Graza – the doomed liner in the film – nicely updates the traditional ghost ship mythos embodied by wood & canvas sailing ships like the Mary Celeste and the Octavius. If anything, the Graza’s rusted, cavernous bulk is more sinister than any creaking wood-hulled clipper could be. 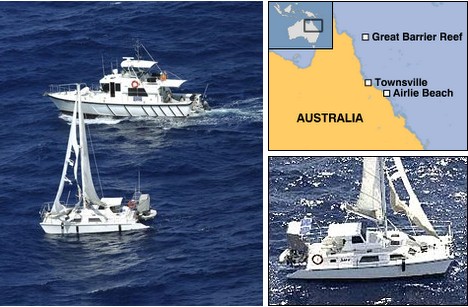 (images via: Sail-World and Fourth Of ESO)

From ghost ships to the “ghost yacht” – the Kaz II, a 32-ft (9.8 m) catamaran, was discovered drifting 88 nautical miles (160 km) off the northeast coast of Australia on April 18th, 2007. No one was aboard and there were no indications of why the 3-man crew was missing, how they left, or where they might have gone. The mystery of the Kaz II has been compared to that of the Mary Celeste. 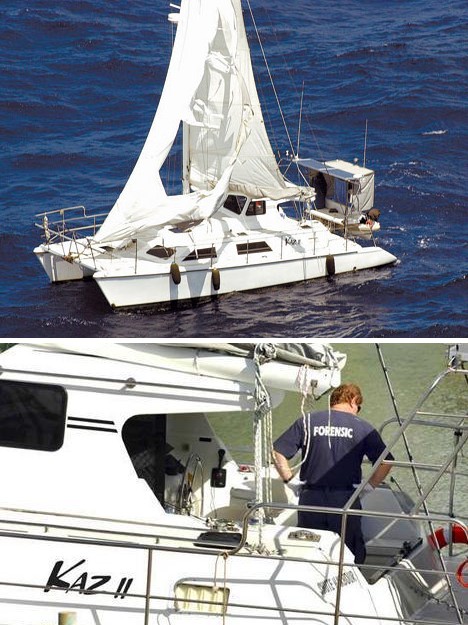 (images via: Magonia and Kaorulogia)

The story of the Kaz II doesn’t stop with the disappearance of the crew. When investigators boarded the yacht on April 20th they found the engines were running, a laptop computer was on and the crew’s midday meal had been laid out uneaten. The yacht carried its full complement of life jackets and a small emergency dingy was tied up near the stern. Commented Jon Hall of the Queensland Emergency Management office, “What they found was a bit strange in that everything was normal; there was just no sign of the crew.” 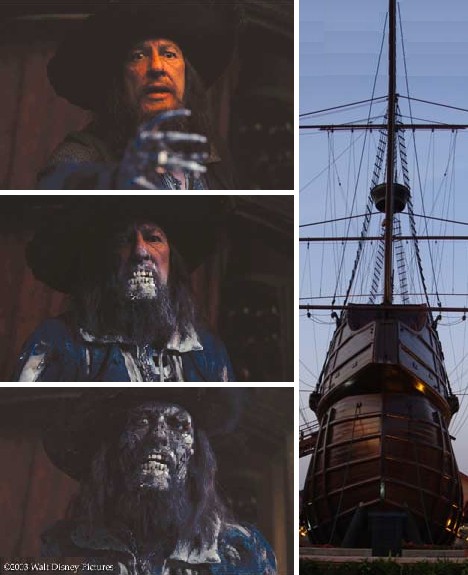 Fans of Disney’s Pirates of the Caribbean film series are quite familiar with The Black Pearl, Captain Jack Sparrow’s black-sailed pirate ship which was raised from the ocean depths by Davey Jones in return for Sparrow’s soul. For many, The Black Pearl is the archetypical ghost ship, usually seen shrouded in night mists and crewed by undead pirates cursed by their theft of gold coins from the Chest of Cortez. 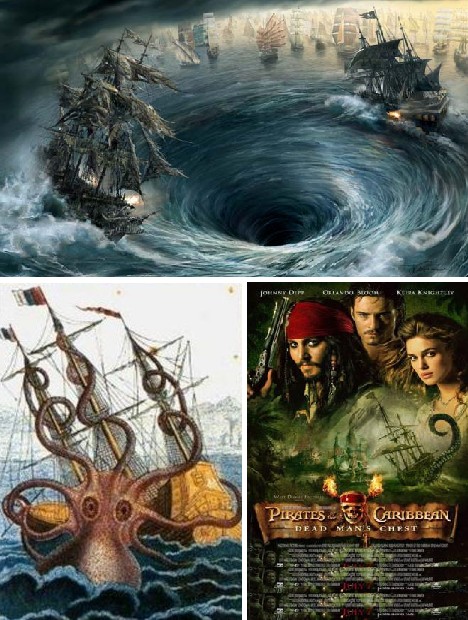 The Black Pearl was said to be “The only ship as what can outrun the Flying Dutchman”, thus linking it to the long and storied history of the world’s most legendary ghost ships. The film series’ producers also called up other longstanding legends of the sea, such as the monstrous Kraken that swallows Jack Sparrow and sinks The Black Pearl at the climax of Pirates of the Caribbean: Dead Man’s Chest. 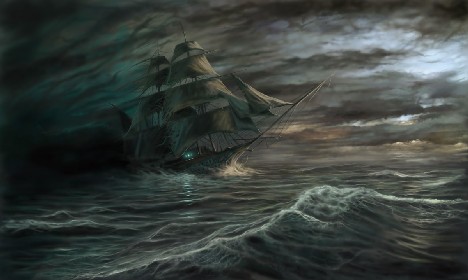 Will there be more ghost ships, either in fact or fiction? Undoubtedly – the nature of ocean travel hasn’t changed much though the ships have, and both writers and film-makers know the value of a good scary story… especially one anchored in reality.