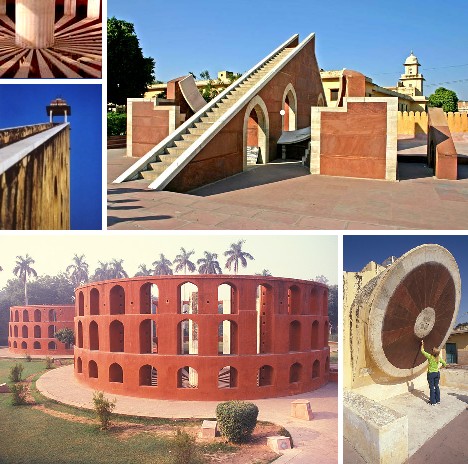 The Jantar Mantar – 5 sprawling astronomical observatories – was built by Maharaja Jai Singh II in the early years of the 18th century. Not one of these elaborate ancient observatories boasted a telescope. What they had, and have still, are grandeur, beauty, and exceptional accuracy as calculating instruments. The surviving Jantar Mantar observatories, preserved and restored, are a testament to the skill and ingenuity of India’s royal astronomers. 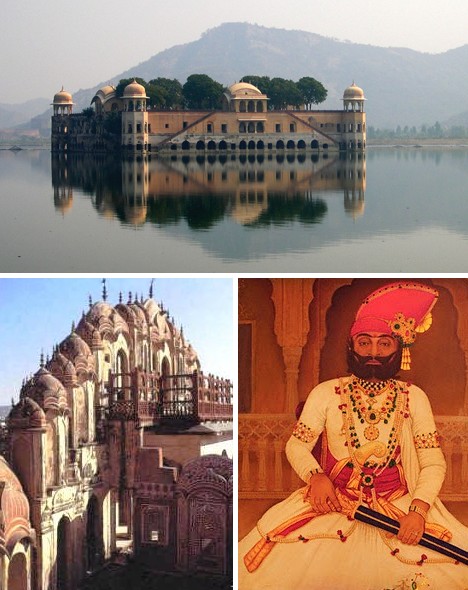 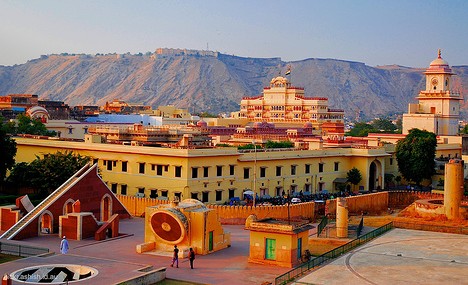 Maharaja Jai Singh II founded the city of Jaipur, located in modern-day Rajasthan, in 1727. The city owes its wide streets and gridlike layout to an architectural master plan – in fact, Jaipur was the first planned city in India. Jaipur is known today as The Pink City, referring to the 1853 visit of Great Britain’s Prince of Wales in which the entire city was painted pink. 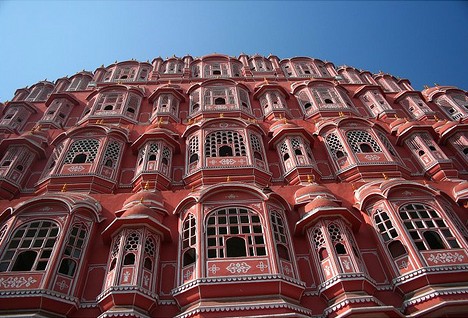 Jaipur’s major buildings were ordered by the “warrior-astrononer” Jai Singh II on the advice of India’s leading architects and mathematicians. Notable architectural masterpieces include the Palace of Winds or Hawa Mahal (above) and the Jalal Mahal, a pleasure palace that rises from the center of a lake. The Jantar Mantar in Jaipur was part of this first flurry of construction and over the next decade other versions were built in Delhi, Ujjain, Mathura and Varanasi. 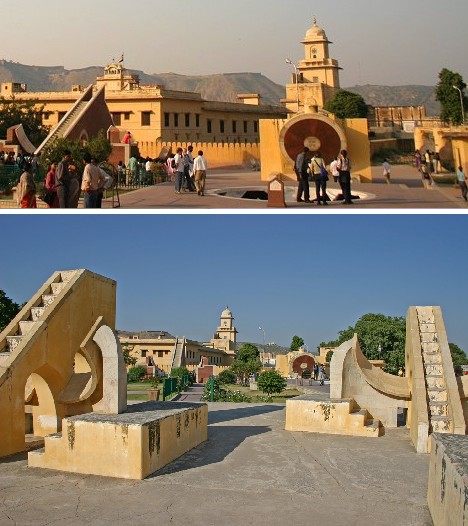 (images via: Asia Explorers and Go2Holiday)

The Jantar Mantar in Jaipur is the largest and best preserved of Jai Singh II’s five pre-telescopic observatories, featuring fourteen major geometric devices. One might ask why, over a century after Galileo had invented the telescope, India’s rulers were still unfamiliar with it. In all probability they knew of the telescope, but the Jantar Mantars were not that type of observatory. The traditional instruments employed were designed instead to calculate the precise positions of celestial objects, crucial knowledge of which was required to determine horoscopes and to pinpoint auspicious days. 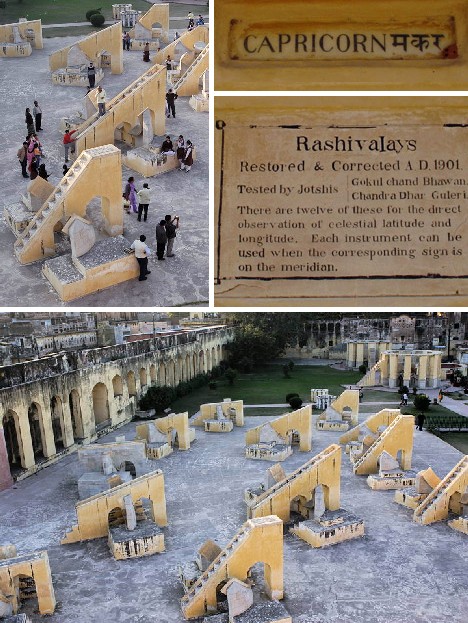 One of the highlights of the Jaipur Jantar Mantar are the dozen precisely angled structures that each target a specific constellation. Most of these were restored in 1901 and have been well-maintained up to the present day. 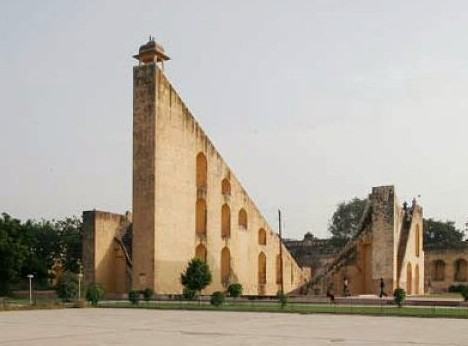 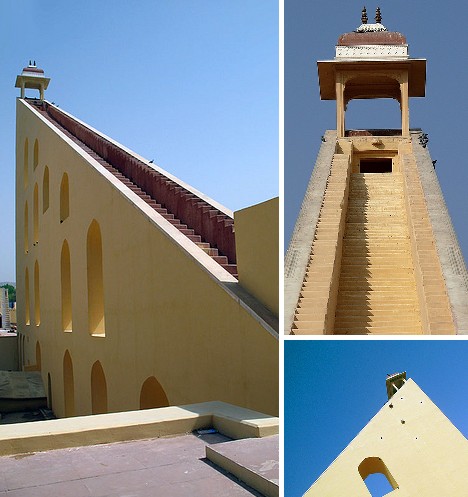 (images via: Obvious, Fabric and Lines and Eyefetch)

The most imposing of the Jaipur Jantar Mantar’s astronomical structures is the giant sundial known as the Samrat Yantra (The Supreme Instrument). A staircase rises 27 meters (88.5 ft) to a small cupola where notable readings were announced. With instruments of this type, size does matter: the Samrat Yantra is the world’s largest sundial and can tell the time with an accuracy of 2 seconds. 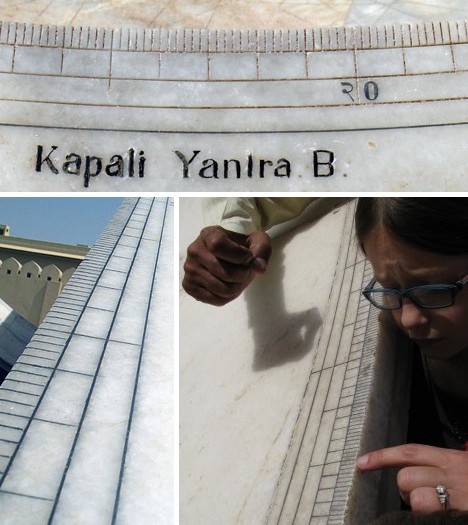 (images via: Swimming in India and Galen Fry Singer)

The measuring surfaces of the Samrat Yantra and other calculating instruments are faced with white marble and have incised notches used to note the path of the sun’s shadow. Observers can actually view the progress of the shadow, which moves at a rate of 1 mm 1/25 of an inch) per second, or 6 cm (2.4 inches) per minute.

Restoration & Preservation of the Jantar Mantar 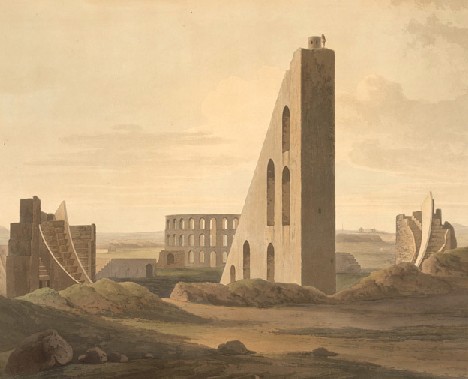 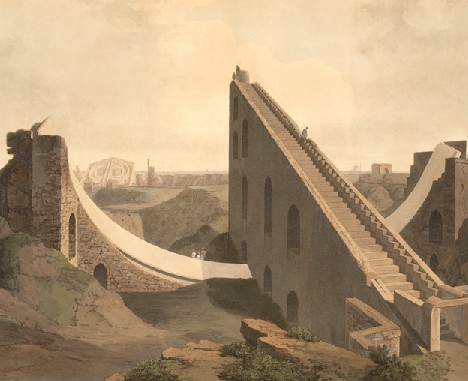 (images via: Wikimedia and Wikimedia)

Jai Singh II was a singular leader among the statesmen of his era and few of his descendants approached the standards he set in the arts of war, science and governance. The Jantar Mantar built in the 1720s and 1730s were neither added to nor upgraded in any way.

(images via: WMF and Travelpod)

Though all 5 of the Jantar Mantar drifted into disuse and decay over the centuries, only one (at Mathura) was completely deconstructed and their building blocks reused. At various points in the 19th and 20th centuries, restoration work on both the structures and their landscaped grounds was undertaken with the pleasing results we can see today.

Heavy Metal Music of the Spheres 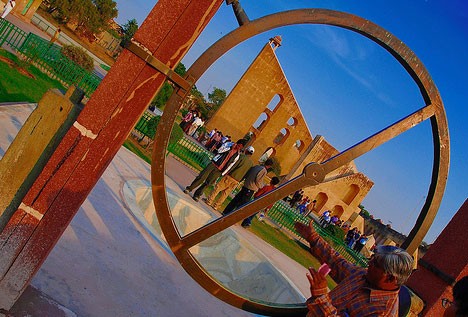 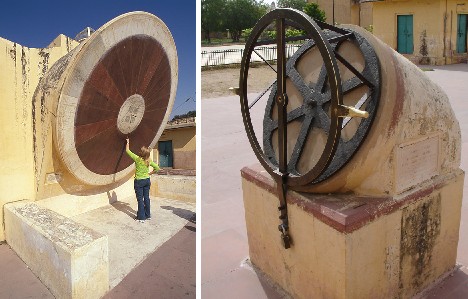 As mentioned, the calculating instruments of the Jantar Mantar were constructed of local stone faced with white marble. One other material was used: bronze. Various thin rings and facings were crafted from the ductile alloy of copper and tin – though it may tarnish, it will not rust and thus not stain and crack the stonework. 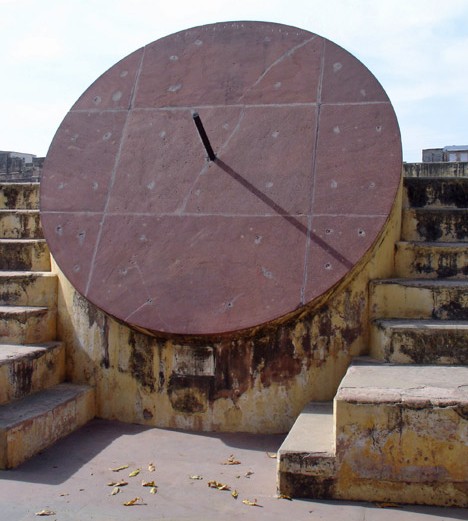 One would think that bronze fittings would be the first to be looted in troubled times, but those at the various Jantar Mantar appear as though they have been in place for centuries. 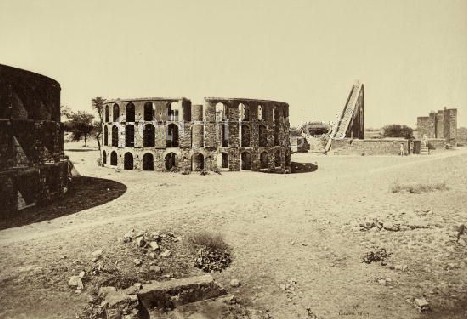 Completed in 1724, the Delhi Jantar Mantar had decayed considerably by 1867 when the above photograph was taken. Much like the Great Sphinx of Egypt, however, it was not to late to return the calculating instruments of Delhi’s Jantar Mantar to their former glory. 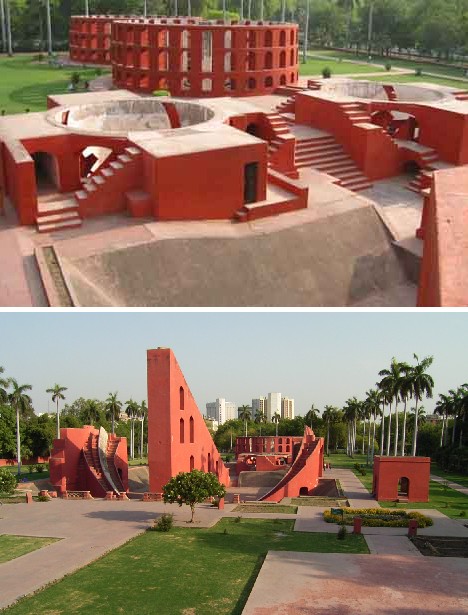 (images via: LiveIndia and Atlas Obscura)

The Delhi Jantar Mantar, located near Connaught Place in Delhi, differs from its twin at Jaipur in that it is constructed of the local red sandstone. This aspect is uniquely beautiful when combined with gleaming white marble. 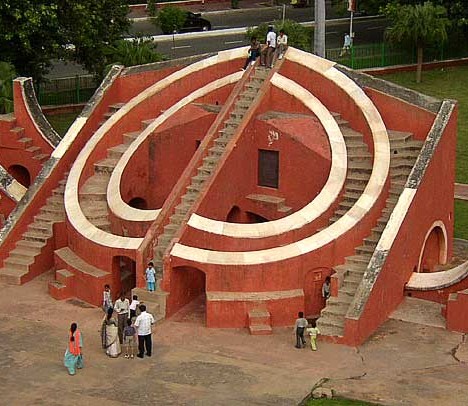 The Misra Yantra was designed as a tool to determine the shortest and longest days of the year. It could also be used to indicate the exact moment of noon in various cities and locations regardless of their distance from Delhi – quite remarkable! 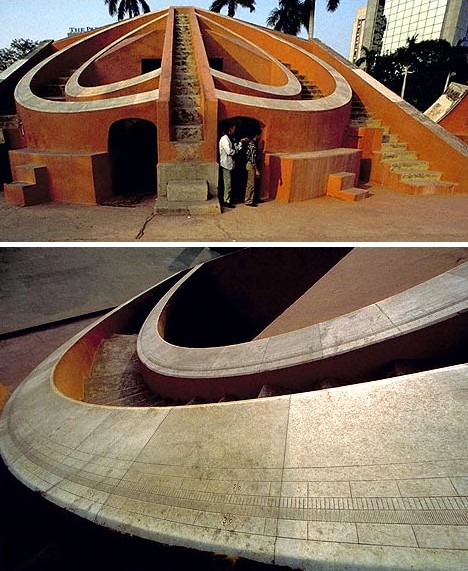 The technical requirements of the Misra Yantra pushed India’s astronomers, craftsmen and stonemasons to their limit. Each marble facing stone had to be precisely curved and set in exact alignment with its neighbors. Here’s a short video that gives one an “in person” look at the amazing Misra Yantra:

The Misra Yantra observatory in New Delhi, via India Video 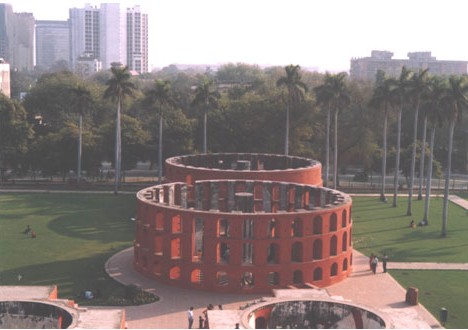 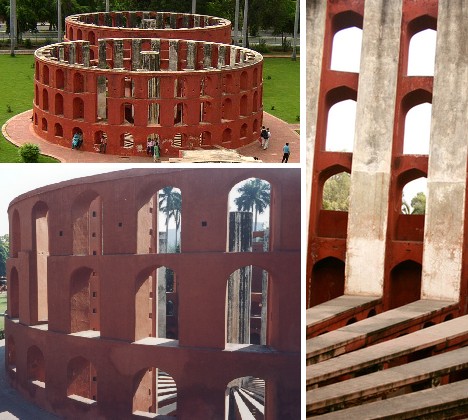 The twin circular sundials of the Ram Yantra remind viewers of dueling Roman Coliseums. Used to measure the altitude and azimuth of celestial objects such as the sun and stars, these monumental instruments are in fact perfect complements of one another – the solid portions of one Ram Yantra’s floor correspond to open spaces in that of its partner. 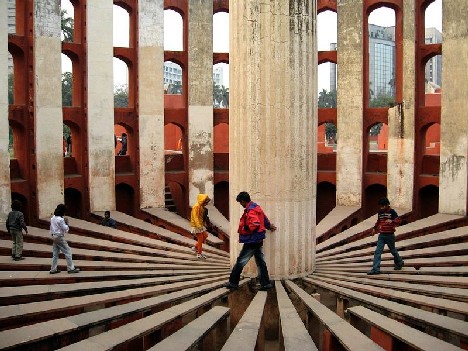 The cut-outs allow observers to note the precise positions of shadows cast by a central gnomon without inadvertently blocking the light. Should the shadow fall into a space inside one Ram Yantra, the observer simply moves to the other instrument. This pattern is repeated with several other calculating instruments of the Jantar Mantar. 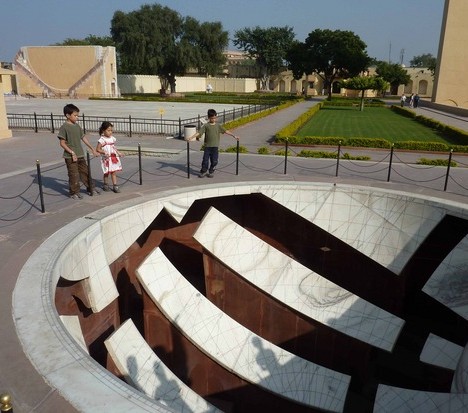 The Jai Prakash Yantra are a pair of hemispherical bowls faced with marble. Like the Ram Yantra, one complements the other – open spaces in one are replaced by surfaces in the other. Inside the spaces are steps for the observers to stand and each bowl was mounted on lead sheeting to ensure it would remain perfectly stable over the years. 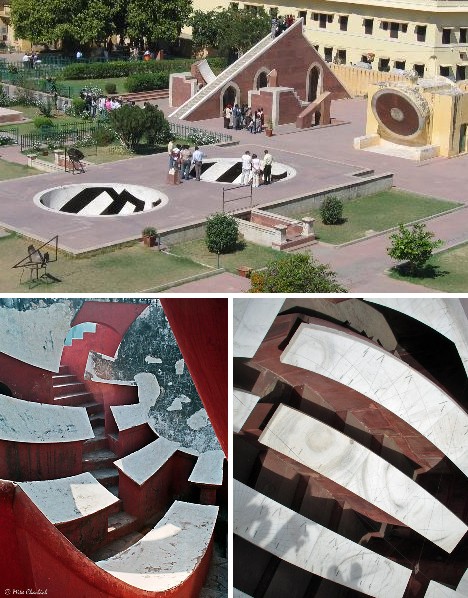 (images via: TrekEarth and Imageo)

The purpose of the Jai Prakash Yantra was to act as a reflection of the sky above. Crosswires stretched over the center of the bowl hold a metal ring, and every point in the sky can be reflected onto a corresponding point on the bowl through the ring. It is said that the Jai Prakash Yantra were so accurate, they were used to calibrate the other instruments in the Jantar Mantar. 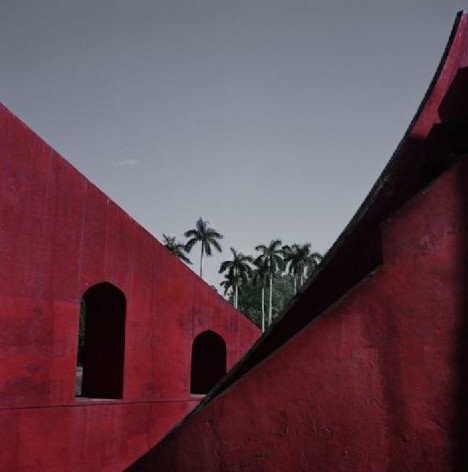 The unique impression of the Jantar Mantar results from the combination of modern mathematical precision with the rich patina of time. As such, the captivating angles and curves of the instruments appeal greatly to painters and photographers. The above photo by Lynn Davis taken in 2007 adds a dash of life in the form of a verdant palm grove to add softness and contrast to the deep oxblood hue of the Delhi Jantar Mantar at sunset.

The Jantar Mantar is relatively unknown as ancient monumental works go, as are the significant accomplishments of India’s medieval astronomers. It is hoped that the preceding exploration will help change that… though only time will tell.