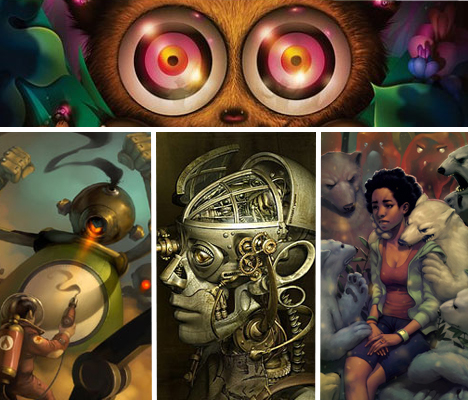 Watching an artist turn a piece of paper and some graphite into a realistic, imaginative work of art is amazing enough – but somehow, seeing such illustrations come to life from pixels on a computer screen can seem even more magical. Whether producing imagery for video games or for their own pleasure, these 15 digital illustrators combine modern technology with raw talent to create jaw-dropping works of art. 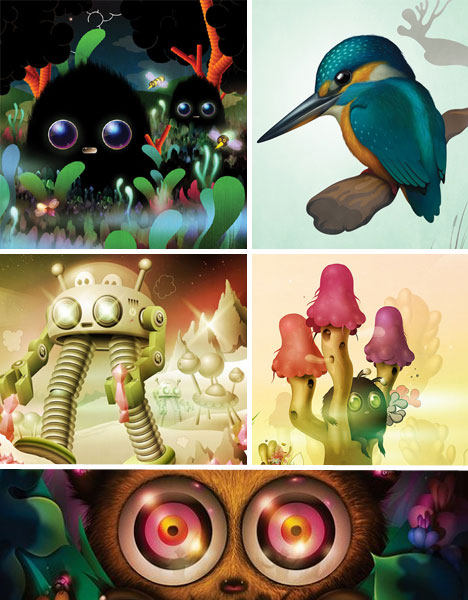 The lush candy-colored landscapes and strange but adorable creatures in Mark Verhaagen’s imagination spring to vivid life through his colorful vector-based illustrations, which have been featured in publications like Computer Arts Magazine. Verhaagen, a freelance illustrator, counts MTV, Nickelodeon and Vodafone UK among his clients. 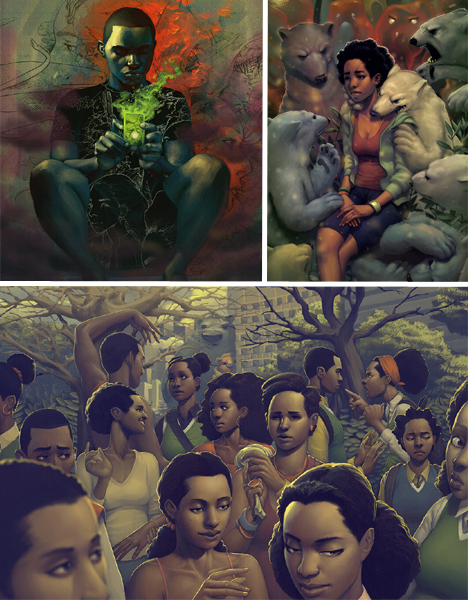 Packed with color, symbolism and an eye-catching depth of detail, Paul Davey’s illustrations still have one quality that stands out above the others: a luminosity that gives each scene the sense of taking place in a dream world. The Jamaican artist currently resides in Miami and is in the process of creating a graphic novel.

He says of his drawings, “They usually revolve around me and people in my life. What they’re feeling and how they make me feel are things I consider when I’m planning and I’m not satisfied with my work unless it gives me some kind of visceral reaction when I look at it.” 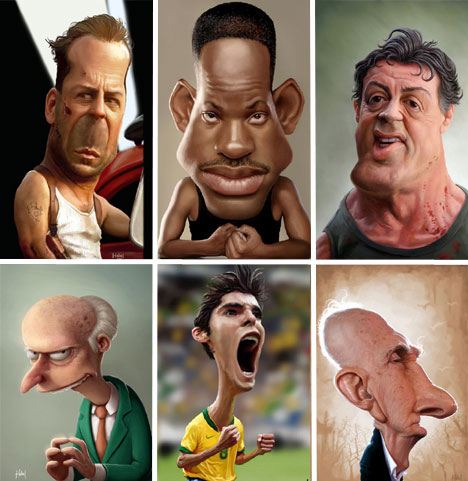 You may not know Tiago Hoisel’s name, but chances are, you’ve seen his work. Hoisel has an incredible ability to find the inner cartoon character in just about anyone – and even bring out the real person in cartoon characters. But these are far from sidewalk caricatures… the attention to detail is incredible. The Brazilian artist works primarily in Photoshop CS3. 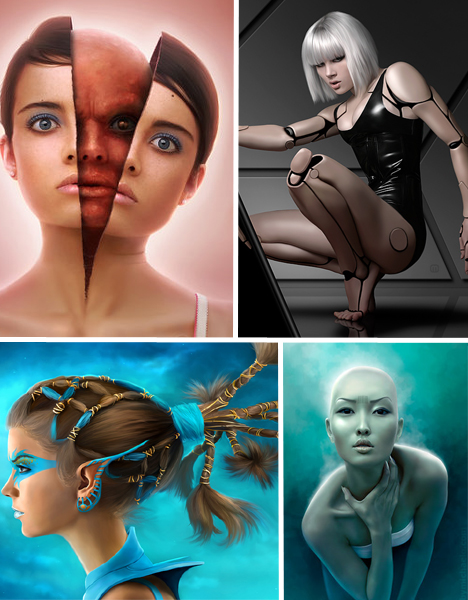 Photomanipulation artist Michael Oswald transforms ordinary photographs into fantastical illustrations that are infinitely more interesting than reality. He says on his website, “My style is best described as ‘photo-manipulation on steroids’ combining unique Photoshop techniques and digital painting. With the exception of the original digital photograph, my work is created entirely on a computer utilizing my knowledge of digital techniques and the traditional art skills I learned in my younger days.” 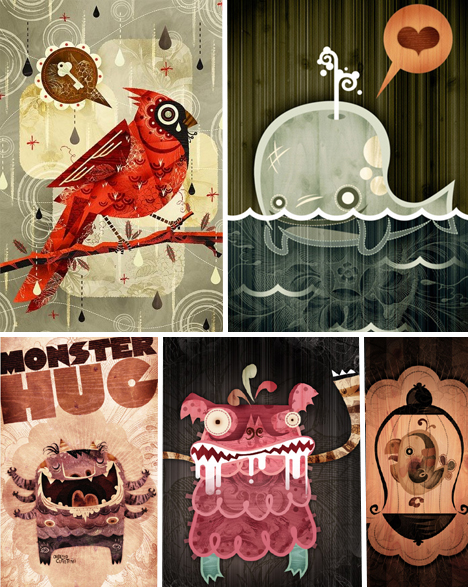 Lighthearted and fun, Mexican illustrator Alberto Cerriteno’s work is created using a unique combination of both traditional and digital media. In an interview with Computer Arts Magazine, Cerriteno says, “Painting and fine art provide richness and a feeling that I like – and results that are impossible to create from scratch on the computer. But working with Photoshop and Illustrator daily gives me tools and resources to explore. I think you should use any media if the results are worth it. Lately, I’ve been experimenting with adding texture to my paintings digitally.” 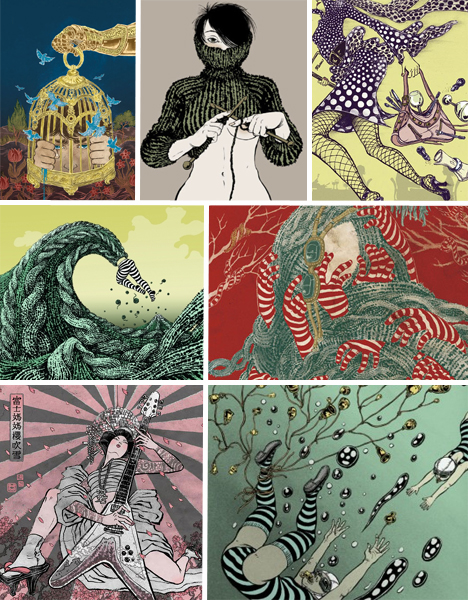 Freelance illustrator Yuko Shimizu (not to be confused with another artist of the same name who designed Hello Kitty) creates illustrations that are utterly modern, yet undeniably colored by her experiences growing up in an old-fashioned Japanese family. Somehow simultaneously delicate and bold, the New York-based artist’s work has appeared in magazines like Mother Jones and ad campaigns for Microsoft, Pepsi and The Gap. 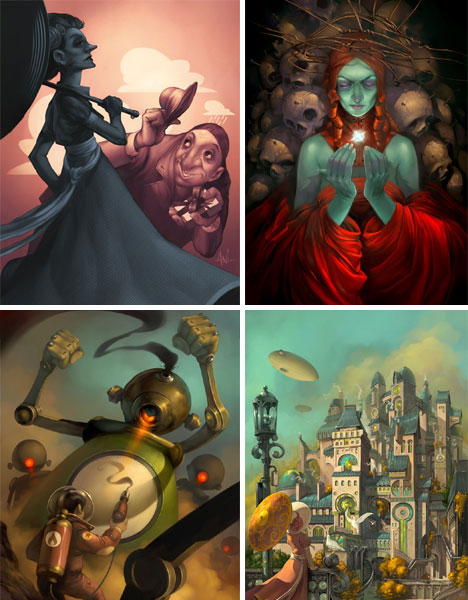 French artist Mathieu Leyssenne got a much earlier start than most artists at digital illustration: he began working in Deluxe Paint 2 on his Amiga 500 at the age of 14, long before the advent of Photoshop and 3D modeling programs. Of his work, Leyssenne told It’s Art Mag, “Each of my characters has a story that I imagine while I draw them. I like to give life to my drawings, to give them a “look”, an identity, a personality of their own. I also imagine them in a situation, which I think makes them much more interesting and yes, funny.” 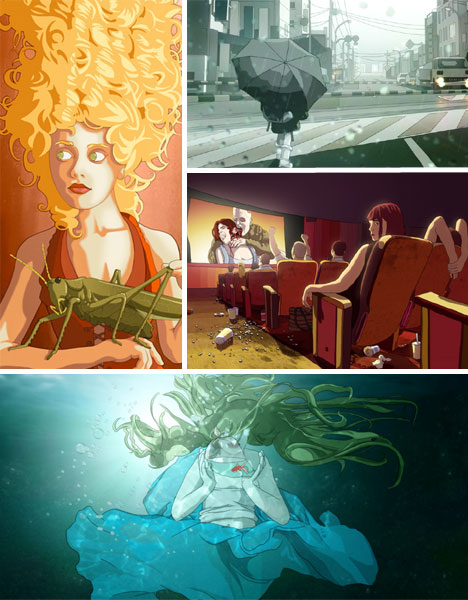 Acclaimed digital artist David Newton creates modern illustrations for clients like Coca-Cola, Microsoft, The BBC and The Wall Street Journal. According to Newton’s agents, “He prefers to work with clients looking for strong creative inputs from him. He tries to avoid the clichéd in all he does.” 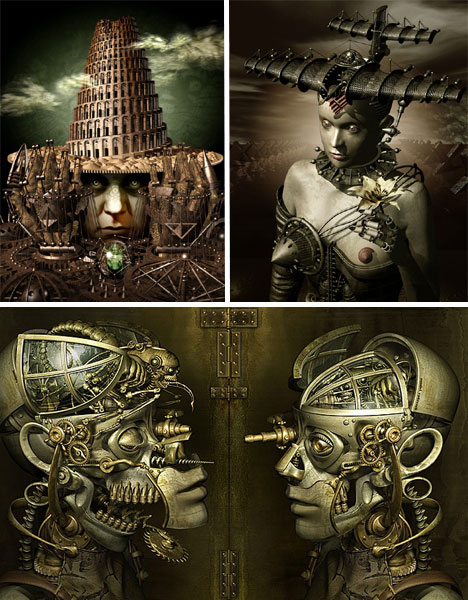 Kazuhiko Nakamura was a big fan of surrealist and cyberpunk art when he was young, and it shows in the stunning 3-D digital illustrations he produces today. An environmental graphic designer in Tokyo by day, Nakamura spends most of his free time on his passion.

He said in an interview with Templates.com, “Now a lot of 3D artists pursue photorealism in 3D modeling. Of course this trend is pretty interesting to me too. However, I like that special creativity and subjective expressions that the painter puts into the real object. I put my own vision of the image into the object and I think this is what makes my works so special. I search for my image tenaciously trying to create the best combination of the shapes, textures and lighting.” 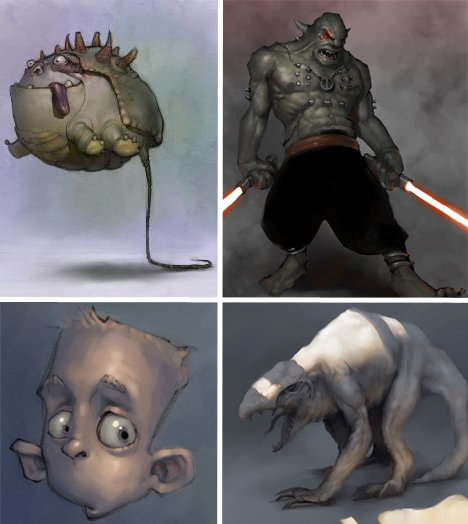 Mark Behm is primarily an animator, having worked for Dreamworks and Blue Sky Studios in the past – but his digital illustration stands alone as a testament to his incredible talent. Behm released a portfolio book called “Nightwork”, packed with many of his best pieces.

Of his influences, Behm told Strut Your Reel, “I grew up surrounded by art from giants like Frazetta and Berkey and Vallejo. That whole scifi/fantasy scene was huge in the 70s and my Dad, who was an artist himself, freely fed my appetite for it with art books and posters and comics. Later I was heavily influenced by a handful of golden age illustrators and orientalist painters.” 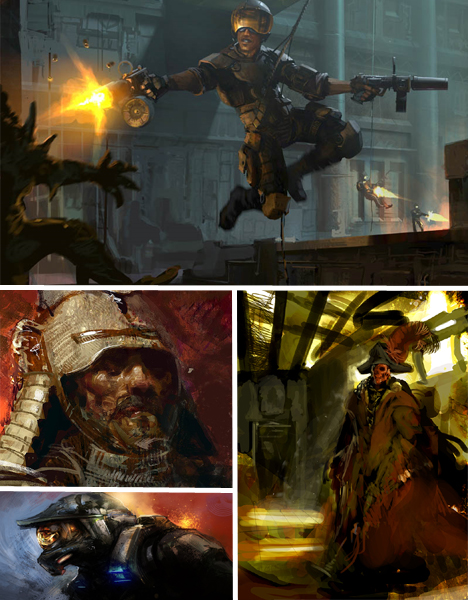 A painterly quality not often found in digital art sets Craig Mullins’ illustrations well apart from most. The digital painter started out in product design, working for Ford, before realizing that his design sense was “a little too weird to be of value to the car design industry”. Mullins uses a combination of programs including Photoshop, Painter and occasionally 3-D software to produce works that look like they were painted centuries ago by a master artist. 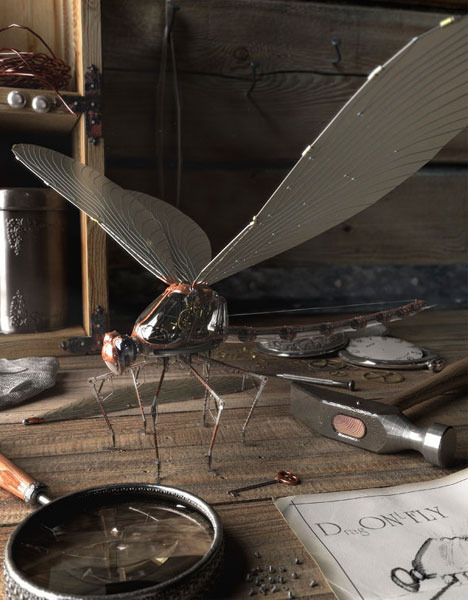 Digital illustrator Denis Tolkishevsky uses 3D modeling programs to create stunningly realistic works of art like “DragONtFLY”, above. Tolkishevsky has won an incredible array of awards for his work, and it’s easy to see why after viewing his online portfolio.

Tolkishevsky told Templates.com, “I remember I saw 3D Max for the first time in the university. A friend of mine showed it to me. It seemed to be really complicated thing at that time, so many buttons, menus, and commands and I haven’t risked to start studying it back then. About four years ago 3D max drew my attention again. Surfing through Internet I’d run across one of 3D galleries, and I was shocked with what I saw, so I decided to try creating something similar. I’ve bought a book with a trial version of 3D max and started studying.” 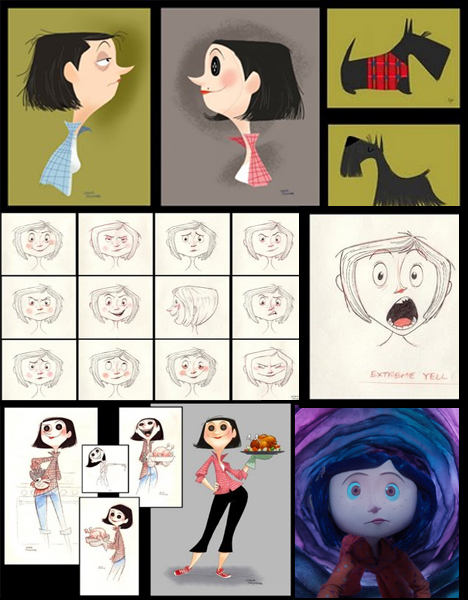 Anyone who has seen Henry Selick’s recent animated feature Coraline, based on the book by Neil Gaiman, has seen Shane Prigmore’s art. The digital artist was a Principal Character Designer on the film along with Shannon Tindle and Dan Krall, also working on some of the animation. 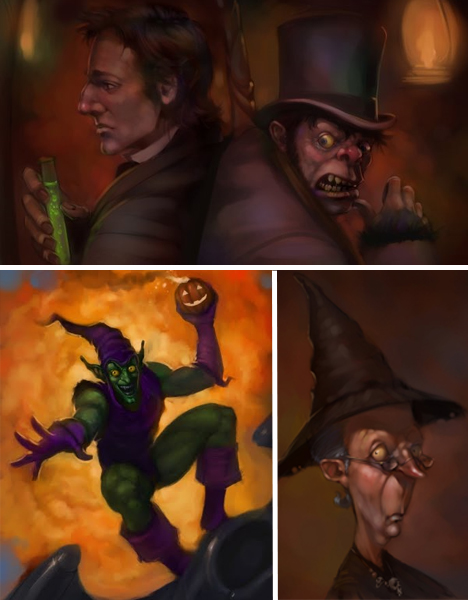 Lead artist at a Disney game studio called Avalanche, Emil Degrey uses digital software to turn his sketches into dark yet colorful, nuanced illustrations – as seen in the images above and on his blog, Mad Genius Art. 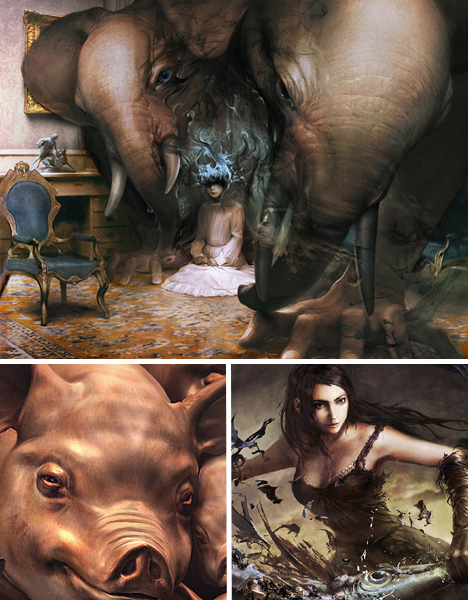 With a background in the video game industry, Tokyo artist Ryohei Hase has now turned to what he describes as “realistic fantasy art”.

In a December 2009 interview Hase told Swide, “Internet stimulates people’s emotion. The environment which people can easily see the art of another country can be a trigger to create new artists.This is the easiest and closest place to showcase my works. My work has the chances to be seen by many people around the world because of internet. I have no idea what I would become without it…”