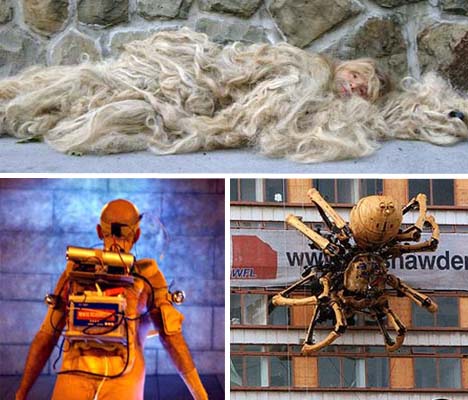 All it takes is a crawling woman in a hairy suit, a bunch of jumping men with televisions on their heads or a guy projecting his private parts onto public buildings to turn urban settings into surreal theatrical stages. Like guerilla action, performance art is a kind of “culture-jamming”, a deliberate interruption of daily life – and it certainly causes people to snap out of their little bubbles and take notice of their surroundings. 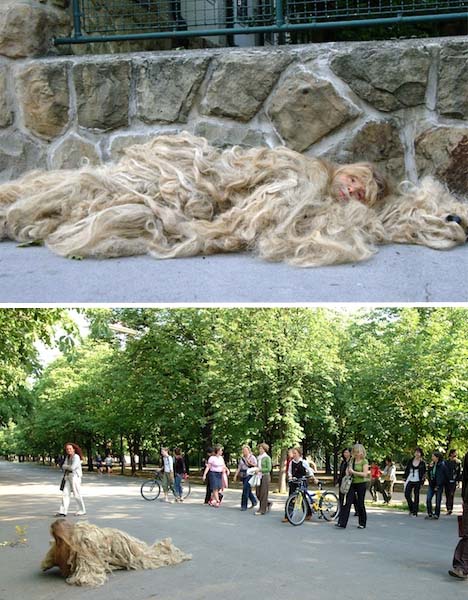 Imagine walking down the street and suddenly noticing something that looks like a nightmarish combination of Chewbacca and Cousin It crawling at your feet. A 2005 performance art project in Vienna called “Marlene Hairy or In My Bathtub I am the Captain” was all that and creepier, because if you followed it, the crawling progressed to bathing. Artist Marlene Haring led about fifty onlookers across town to her home, then went into her bathroom and shut the door, which bore a sign reading “If you want to talk with me, you have to bathe with me.” Several people got into the bath. 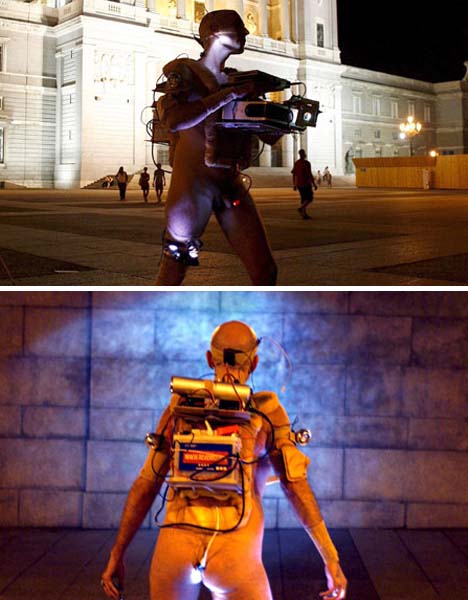 Is performance artist Jaime del Val overcompensating for some perceived shortcoming, or just really into phallic shadow art? Both and neither, according to him. Del Val, who walks the streets of Madrid projecting gigantic images of his penis onto urban surfaces, says buildings are “organs of power”. He also states that he’s seeking to promote himself as a “pangender cyborg” in protest against homophobia, surveillance, control and consumer society. 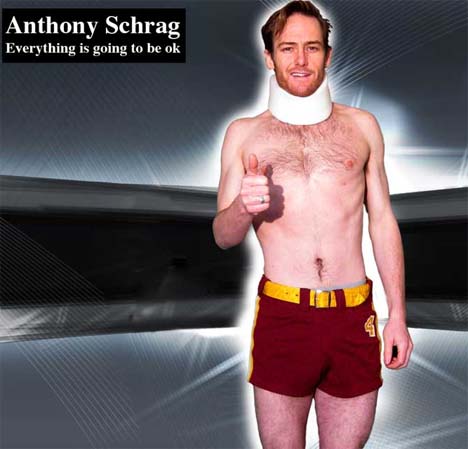 Violence is good. Or at least, that seems to be the message artist Anthony Schrag is sending out as he challenges the public to take their anger out on him for a performance art piece. Schrag believes that violence is too often considered undesirable when at times, it can be cathartic. He has built his career on using the human body as a tool of communication.

“I’m no professional, and there is certainly a sense of danger in letting strangers do what they will with my skinny little body, but that is what makes the project interesting: The trust and sense of reality between two people that only know each other as opponents. If I show contenders that I trust them, it is usually reciprocated – and there’s a referee on hand in case things get too rough!”

It’s a bizarre scene: a nurse pulling down the pants of an aging Japanese businessman, who’s crawling down an Australia sidewalk. Only, the ‘man’ is actually a robot, meant to symbolize the Asian economic crash and Japan’s rigid “salaryman” culture, and the ‘nurse’ is performance artist Momoyo Torimitsu.

It’s the LA art scene – is anything surprising? Six men in weird masks blaring unsettling music from amplifiers strapped to their chests barely get a reaction in this town.  A strange bit of guerrilla performance art called SWARMUSIC took place in the midst of a November 2009 downtown Los Angeles Art Walk. Each of the performers walked a planned route, and each of their amplifiers was playing a portion of a song. As the performers wove in and out of the crowd, the “song” faded in and out.

The rhythm of daily life can be chaotic… especially when you allow wild creatures to play instruments. French artist Céleste Boursier-Mougenot set up a bunch of instruments in a walk-through aviary for a performance art installation at The Curve in London, allowing a flock of zebra finches to make their own special music. The installation will be live from February 27th, 2010 to May 23rd 2010.

Attack of the Inflatable Artist

What else is there to do when a giant inflatable sculpture is running toward you at full-speed, but haul ass in the other direction? Pittsburg, Kansas performance artist Jimmy Kuehnle says he just wants to shake people out of their zombie-like routines, make them smile and “change their way of thinking in a small way.” Their reactions range from the expected avoidance to fascination to cursing. 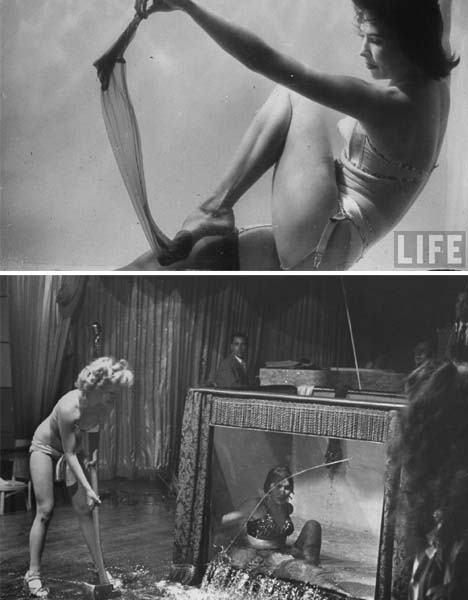 In 1949, performance art wasn’t all that common – and people weren’t yet completely hypnotized by the boob tube. So it’s easy to see why the spectacle of underwater stripping would draw a crowd, like the routine done by one “Divena” in New Orleans. But apparently, Divena’s fellow strippers weren’t too happy about the attention she was getting. The caption under the bottom photo, from LIFE Magazine, reads “Stripper Evangeline Sylvas angrily breaks a water tank being used by a fellow stripper—a disruption that was not a planned part of the act.”

Street with a View 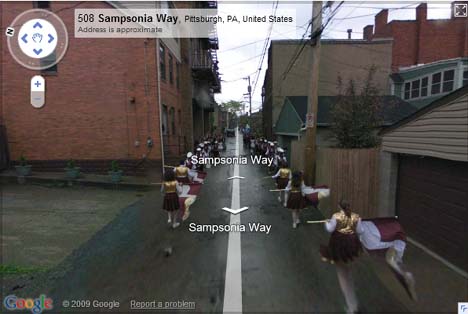 (image via: street with a view)

Google Street View gets a lot more interesting on one particular Pittsburg block thanks to an organized performance art campaign called Street with a View. Robin Hewlett and Ben Kinsley gather neighborhood residents on Sampsonia Way to act out parades, marathons, band practices and other scenes – all for the enjoyment of virtual tourists.

Nothing grabs attention in the streets quite like a 12-foot walking tree. Performance artist Cliff Spenger aims to bring a little nature to urban environments and inspire people to reconnect with the natural world.

Vietnamese artists Le Van Son and Le Nguyen Manh teamed up with Danish artist Christian Falsnaes for a project called “Trash Mind / Tri Tue Rac”, which involved jumping around in reflective vests with televisions on their heads. Maybe they’re trying to say that TV trashes our minds, or maybe they just like to shock the hell out of random people on the streets of Hanoi. Either way, it’s entertaining. 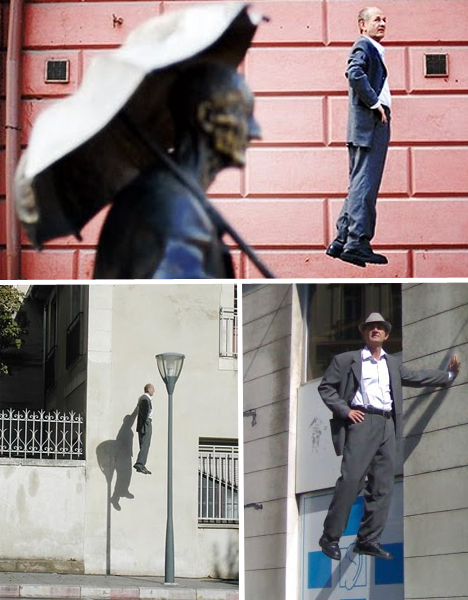 Wait, is that guy floating? It sure seems like it, when artist Johan Lorbeer takes his installations “Proletarian Mural” and “Tarzan” to the streets. Lorbeer gazes serenely out in space while hovering a dozen or more feet in the air, casually leaning his arm against a building. Onlookers gather and stare in wonder, trying to figure out exactly how he can pull off such an illusion (hint: the supporting arm is fake). 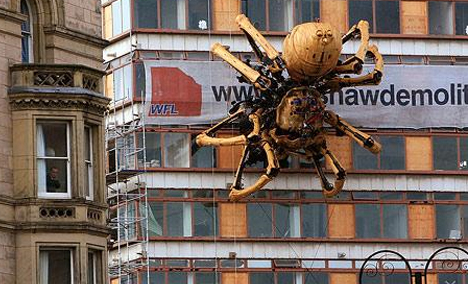 Anyone with a fear of spiders would have been well-advised to stay away from Liverpool in September of 2008, when an outrageously large spider appeared on the side of a downtown building. This work of street theater came at an unusually large cost and scale – the £250,000 spider measured over 65 feet across and was operated by 12 people strapped to its frame, who coordinated its movements.