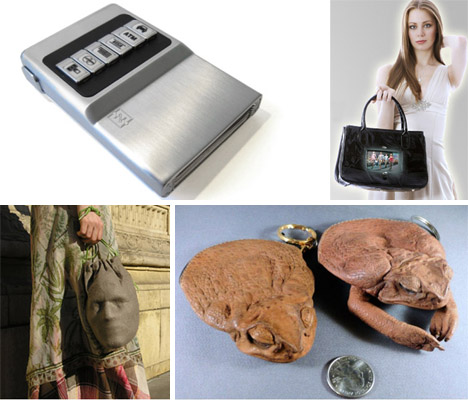 Wallets and purses are functional and practical carriers for cash, cards and the miscellaneous necessities of daily life – but who says they can’t be more? Forget that boring scrap of leather and slide an adapted Atari game cartridge, space-age metal contraption or even a dead stuffed cane toad into your pocket instead. These 14 wonderfully weird, cool and geeky designs will get you looks of envy from some people an looks of utter horror from others. 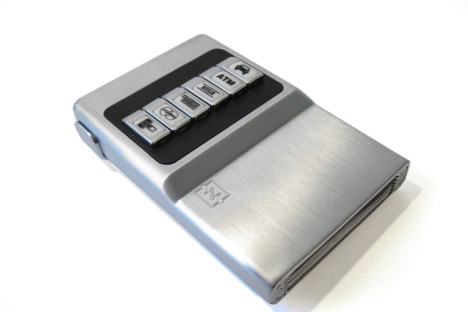 Just like the dimwits in those commercials that can’t seem to handle performing the simplest of tasks, you whip out your wallet to pay for a purchase. But wait – you can’t seem to find the right card, fruitlessly flipping through plastic and cash and quickly losing your cool. You could organize your wallet a little better, or you could make the whole process mind-numbingly simple with this clever (but bulky) contraption: a metal wallet with individual slots for each card. You just press the button for the card you want, and it slides forward. Magic pasta strainer not included. 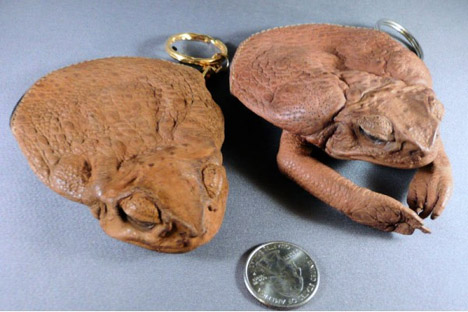 Why settle for buttery, hand-dyed Italian calfskin leather when you could carry around a cane toad? This ultra-fashionable accessory is made from the corpse of a real cane toad, warts and all. Choose the streamlined legless look to keep up with the latest trends, or keep the legs and those gnarly toenails intact for added visual interest. 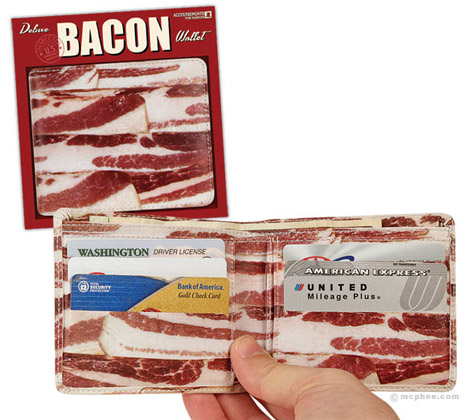 For the bacon lover who has everything – including neckties and dresses made from real fried pork flesh – nothing but a bacon wallet will do. Well, ask (or not) and you shall receive. The Bacon Wallet may look like the real thing, but alas, it’s sadly free of bacon scent. At least it won’t putrefy in your pocket. 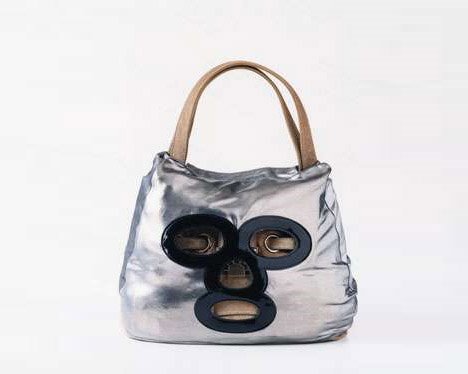 It’s finally socially acceptable for anemic fashion icons with blunt bobs to proclaim their secret passion for… Mexican wrestling. Or at least, that’s what this luxury handbag, featured in the pages of Vogue Nippon, seems to say. Don’t keep it inside, wear it proud. 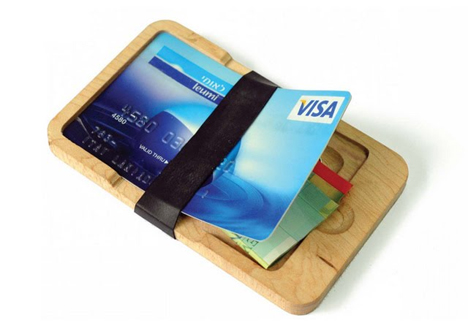 Can wallets get any simpler than this? Forget gimmicks and unnecessary gadgetry, this wood wallet by Itay Laniado design group is just a single piece of maple, oak or beech that uses your credit card to keep cash secured in a small chamber. 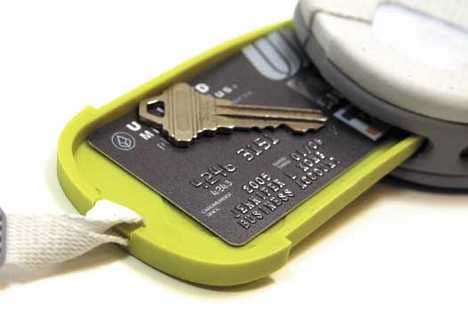 Sexy? No. Practical? You bet – and isn’t that what wallets are supposed to be all about? The Reef ‘Stash’ flip-flop has a super-handy built-in compartment to store small items like keys, cash and cards while you’re at the beach. 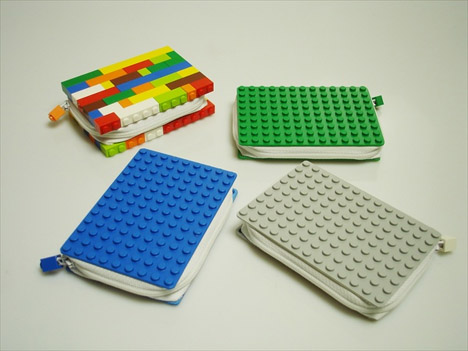 If you just can’t resist those little plastic bricks, this customizable LEGO wallet might be right up your alley. Sure, you’d probably have to use the pouch itself to carry around the LEGOs, leaving little room for money and essentially making this more of a portable toy set – but it’s still fun. 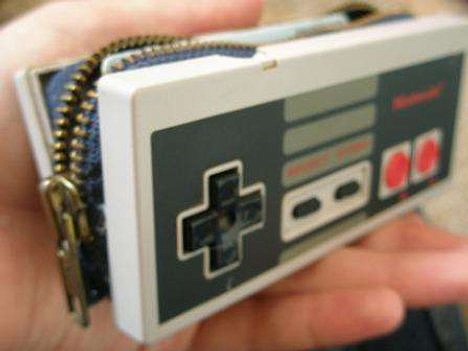 Only the most hardcore Nintendo geek would actually carry one of these homemade NES controller wallets around – especially because they don’t exactly fit into your pocket. Still, it’s a covetable DIY project for crafty gamers who just can’t get enough NES. 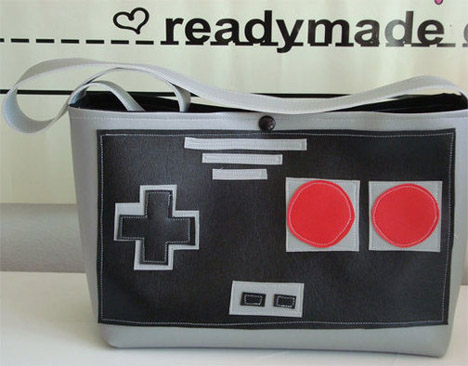 Why stop at a mere DIY controller wallet when you could have an NES controller purse to put it in? For the ladies who love to fly that geek flag proudly, this vinyl clutch is quite a deal for $20 at inhope.etsy.com. 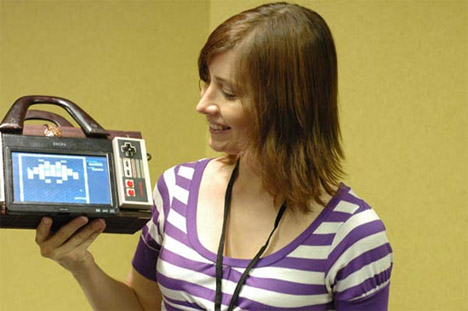 Oh yes, it gets even better. Not only can you proclaim your geekdom with a fully functional NES system incongruously mounted onto a wooden purse, you can keep yourself endlessly entertained no matter where you go and practically beg video game-deprived criminals to swipe your bag and run for the pixelated hills. 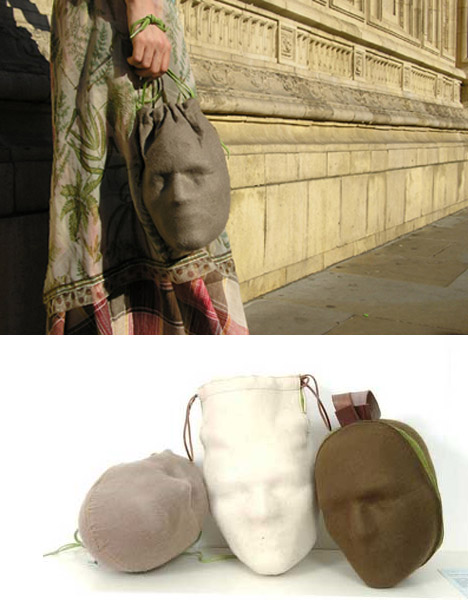 How do you say “I’m creepy,” but do it in a subtle and fashionable way? A decapitated human head in a classy linen drawstring bag is a great starting point. Designer Yael Mer was inspired to create this highly unusual molded purse by the biblical story of Judith cutting off the head of Holofernes. As one commenter on Purse Blog put it, “What’s next, an umbrella shaped like an amputated leg?” 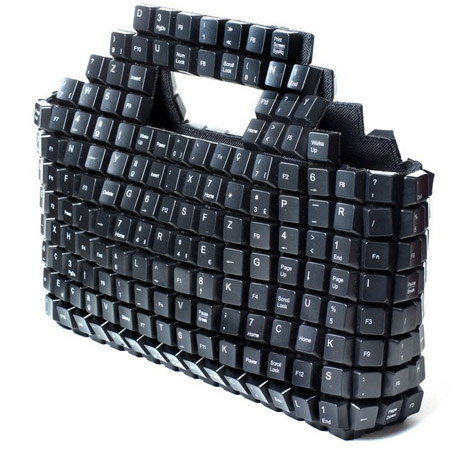 If you’d rather be analyzing binary code, perhaps this is just the accessory you’ve been searching for. Sure, there are far too few female computer engineers in the world who would drool over a purse like this, but considering that Barbie is the newest member of their ranks, the profession – and geeky girly stuff like this purse – might just get a lot more popular. 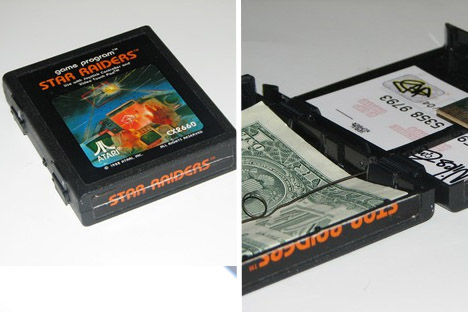 Retro game lovers may cringe at the sight of a 25-year-old Atari cartridge being turned into a wallet, and there’s no telling whether the game was still functional before it became a fashion accessory, but how many of these vintage collectibles have made their way into landfills over the years? It’s a fun and functional example of creative(ly geeky) reuse.

BAGTV – Purse and Entertainment in One 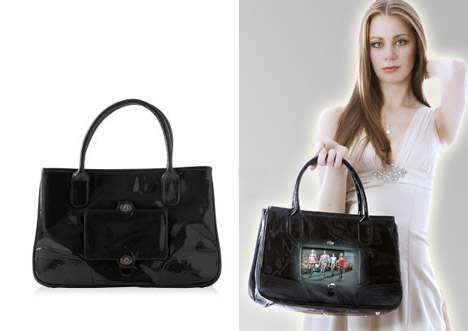 Newspapers, iPods and portable DVD players just aren’t enough anymore. Our entertainment needs to be constantly present no matter where we go, and it must also be as conspicuous as possible. Meet the BagTV, a $300 purse with a built-in DVD player. “Use at night in bars, and clubs to show off your latest photos, or favourite videos,” say the manufacturers.  Because what everyone in a noisy bar really wants – in addition to music and/or television screens already present – is some annoying person trying to show you a video of their drooling baby on their purse.