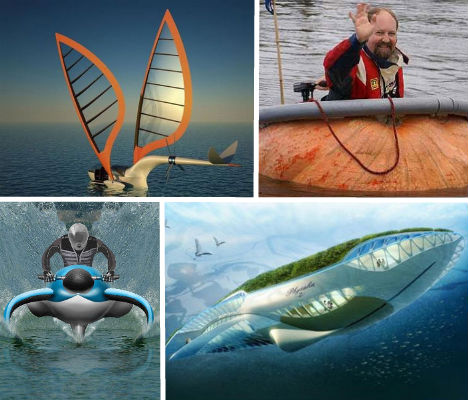 First there was the guitar boat, the wooden Ferrari boat and the ‘spider that ate San Francisco’. Now come 12 even cooler and crazier watercraft designs and concepts from super-high-tech water-cleaning ‘whales’ to the lowest of the low tech – duct tape and pumpkins. Perhaps not all of these awesome boat, hydrofoil and jet ski designs hold water, but they’re definitely interesting eye candy. 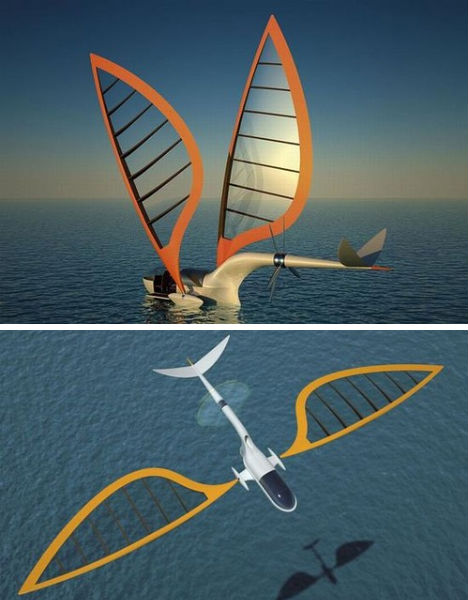 Like a massive dragonfly, ‘Sailing Aircraft’ by Yelken Octuri can glide through the air and then land on the surface of the water. But unlike dragonflies, this theoretical water/aircraft can then upturn its wings to catch the wind and sail. Commissioned by a captain, the design can fit four passengers and even has two lateral panels that can flip over to become pontoons. 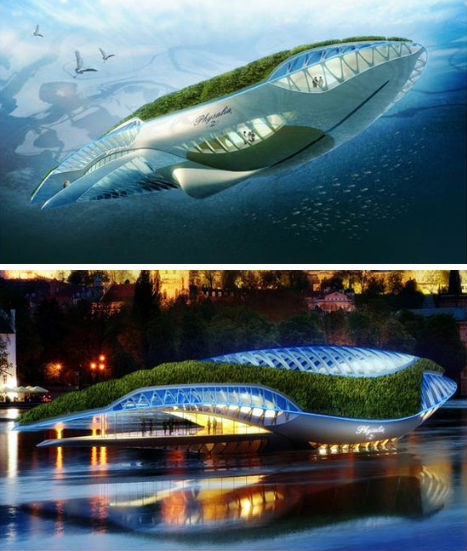 From the same designer that brought us the awe-inspiring Lilypad design for a nature-inspired, eco-friendly floating city comes ‘Physalia’, an amphibious self-sufficient vessel that takes its shape from whales and actually cleans the water as it ‘swims’. Designer Vincent Callebaut imagines it floating through the world’s rivers eliminating pollution and providing more clean water to drink. The inside is filed with gardens, and the ship is covered with a green roof as well as thin-film solar panels. 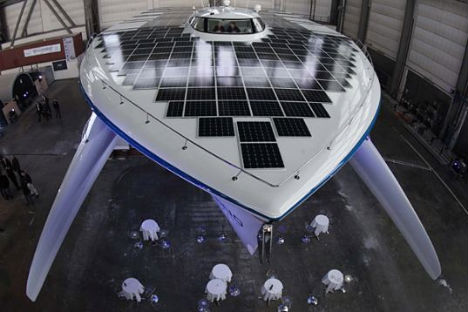 While the Physalia may be many decades from actual construction, another solar-powered boat is almost ready to launch. PlanetSolar is the world’s largest solar-powered watercraft at 31 meters long and was set to take a trip around the world in April 2010, which was delayed – but in September, the boat did make it from Germany to Spain and will undergo further testing in Barcelona. 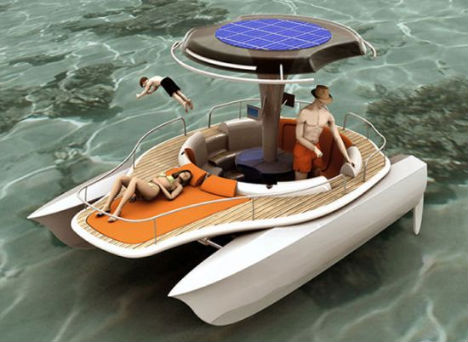 When it’s sunny, you could take this solar-powered boat on a silent, pollution-free joyride, pausing to lounge on the deck and jump into the water. But if you find yourself out to sea on a cloudy day, you’re not stuck: you can just pedal back. The design eliminates the costly fuel needed to keep most modern-day boats running, though solar panels will have to get quite a bit more powerful before this design is really viable. 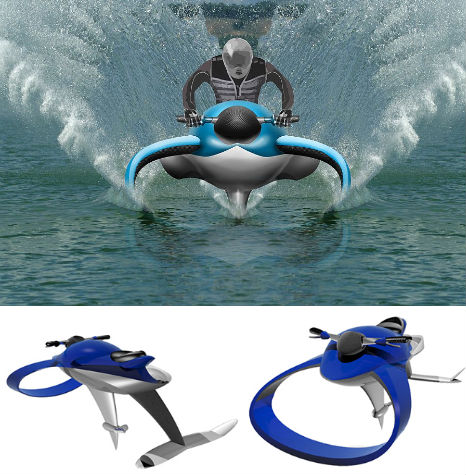 If you’ve ever wished your jet ski had wings so you could catch some air and go even faster, this is basically what you’ve been looking for: the ‘Dolphin Hydrofoil’, a personal watercraft that lets you jump out of the water just like its namesake. Since the hull is off the water when in motion, you can make banked turns at high speeds. So far it’s just a concept by Nikko Van Stolk, but a very cool one. 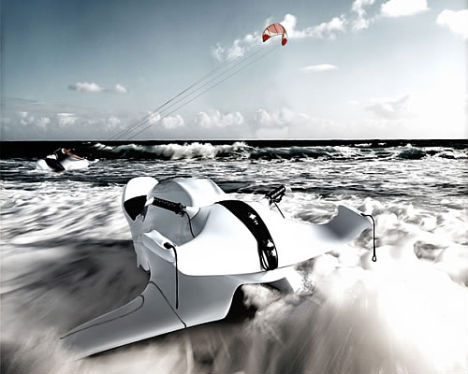 Imagine gliding over – and under – the surface of the sea on what looks like a futuristic jet ski, only without the fuel. The Nereus is a kite-powered watercraft concept that lets you dive under the water at will, pulled back up by the wind. No word on just how windy it has to be in order to pull you at the claimed ‘high speeds’, but it sure sounds fun.

When Japanese artist Yasuhiro Suzuki looks at the wake behind a boat, he thinks of a zipper – which is why he chose such an unusual shape for his own watercraft, the Zipper Motorboat.  It’s certainly unlike anything else on the water, seemingly unzipping the ocean as it cruises.

Who else but the Mythbusters can you count on to determine whether duct tape is actually durable enough to use as the main material for a boat? Adam and Jamie used 690 square feet of duct tape to create the hull and sail of ‘Stuck on You’, which they then sailed out in the San Francisco Bay. It worked well enough for a while – and when they sprung a leak, they repaired it with more duct tape.

On their own, the two materials used to create pykrete – water and sawdust – are the last things you’d ever consider using to build a boat. But when you freeze sawdust and wood pulp in a 14%/86% mixture, it becomes a literally bulletproof material that is stronger than ice. The Mythbusters built a pykrete boat that actually managed to float and withstood speeds of about 23 miles per hour, but it quickly sprang leaks and melted, earning a “plausible but ludicrous” conclusion to the myth. 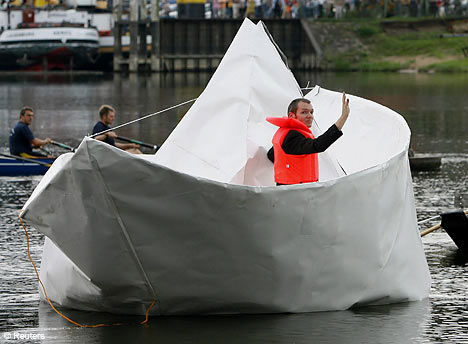 If waxed paper can hold in liquids like milk, why can’t it be used to float on water? That’s what artist Frank Boelter asked himself one morning over breakfast while looking at a carton of milk, and this is what resulted. The 30-foot boot, which weighed only 55 pounds and took just two hours to construct, is made from ‘Tetrapak’ material and was expected to last 40 days on the water before disintegrating. 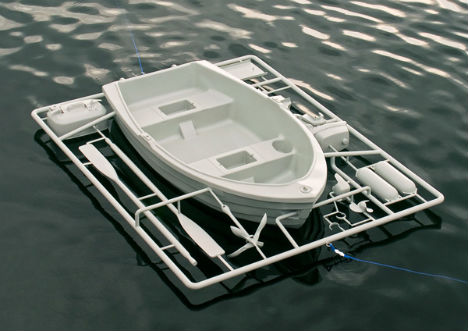 Artist Michael Johansson created a life-size ‘model boat kit’ from a real dinghy, boat equipment and a welded metal frame. “The real boat is transformed into a model of itself, and its original purpose has given way to something else,” says Johansson. 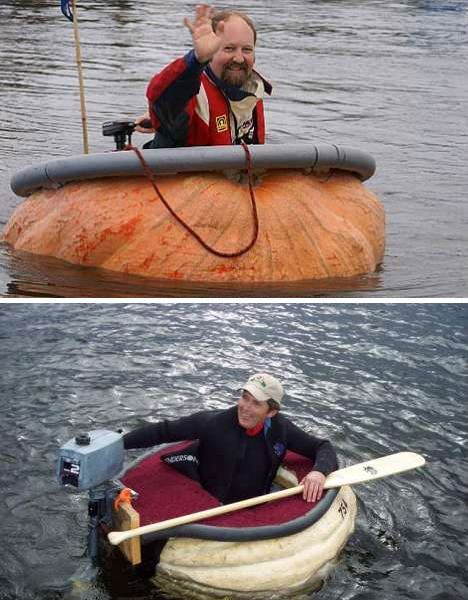 You might think that JR Hildebrandt was awfully disappointed when he asked his fairy godmother for a new boat and got this instead. But Hildebrandt made this curious canoe from a 760-pound pumpkin and spent 8 days rowing in it to raise money for charity. It’s about as low-tech as watercraft gets, but surprisingly, giant pumpkins serve as relatively stable boats – there’s even a Giant Pumpkin Boat Race every year in the town of Ludwigsburg, Germany.