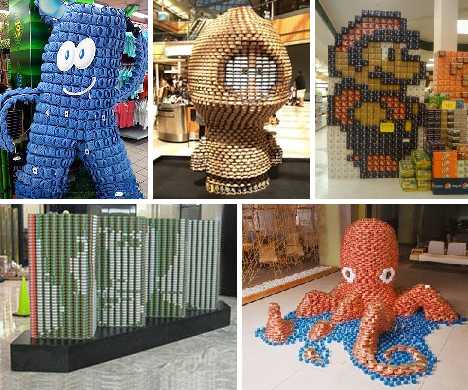 Supermarket shelf stockers have few opportunities to express their creativity but when they do, look out… and when curious shoppers get too close, LOOK OUT! These 35 superbly creative supermarket displays show what can be done with packaged food, a well-lit space and a heapin’ helpin’ of vision. Hopefully their art won’t get them canned. 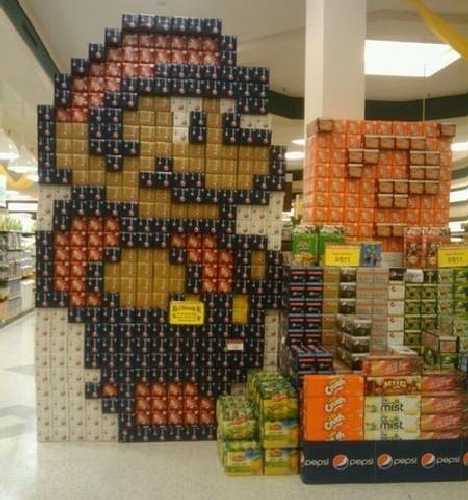 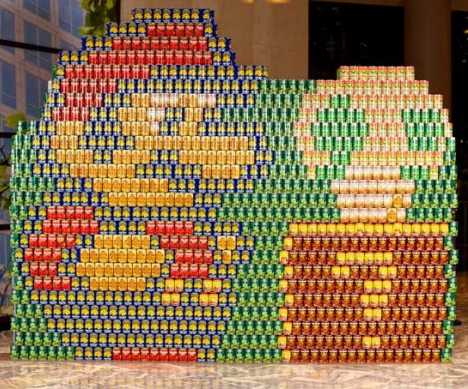 (images via: ChinaSMACK and Oddity Central)

As many supermarket employees are school-age teens working part time for video game money, constructions like this awesome Super Mario display isn’t much of a surprise – the care and craftsmanship IS, however. The builders have obviously noted how the use of colorful, blocky soda cases adds a distinct 8-bit vibe to their Mario masterpiece. Considering the subject, this is definitely a plus.

Here’s a short tribute video highlighting one of the many Super Mario soda can montages: 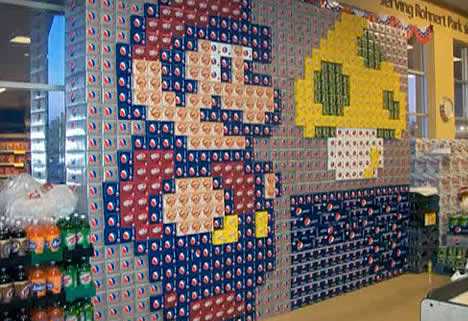 (image via: Lost At E Minor)

As mentioned, building a Super Mario themed soda can display is something that’s been done more than a few times in more than a few supermarkets. One assumes the builders of these 8-bit wonders of the world got the boss’s approval beforehand… if not, it could be Game Over. 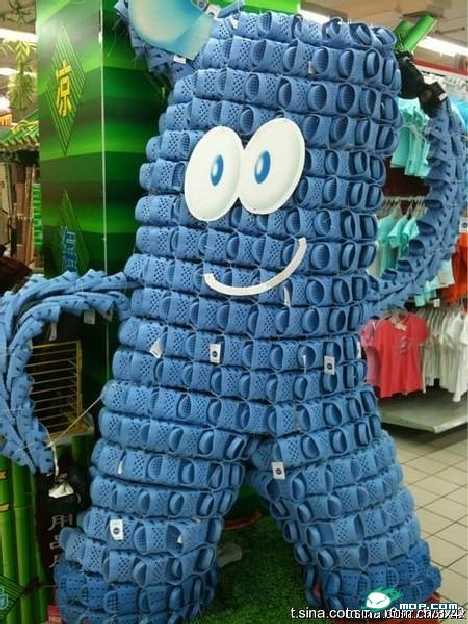 Meet Haibao, the Gumby-esque cartoon mascot for the 2010 Shanghai World Expo. Haibao isn’t all that complex of a character but you still have to give the anonymous employees of a Chinese supermarket mad props for constructing this larger than life homage… from plastic sandals! 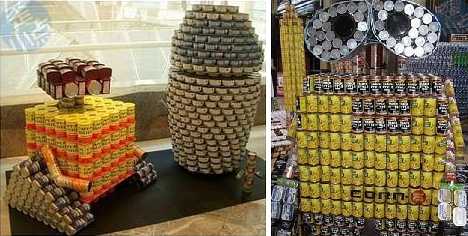 The trio of creations above also come from China where such open and obvious creativity is somewhat unexpected – unless the subjects espoused socialist revolutionary themes. We’re not sure what the local communist party bigwigs think but WE think we’ll call them “can-droids”. 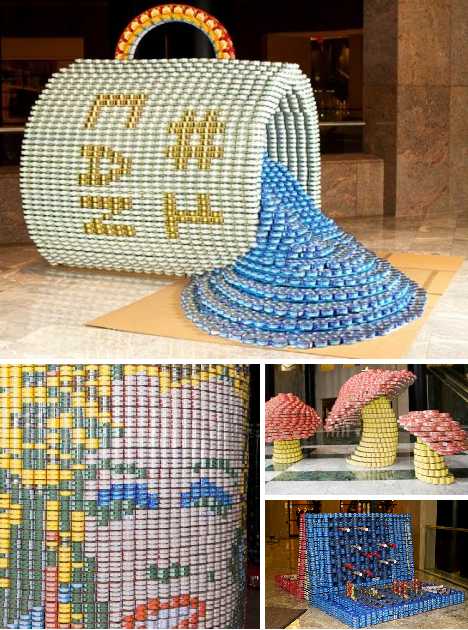 Bring together 25 teams of architects and around 100,000 full cans of food at the World Financial Center Winter Garden in New York City, and you’ve got the recipe for the 18th annual Canstruction© competition that ran from November 11th through 22nd. 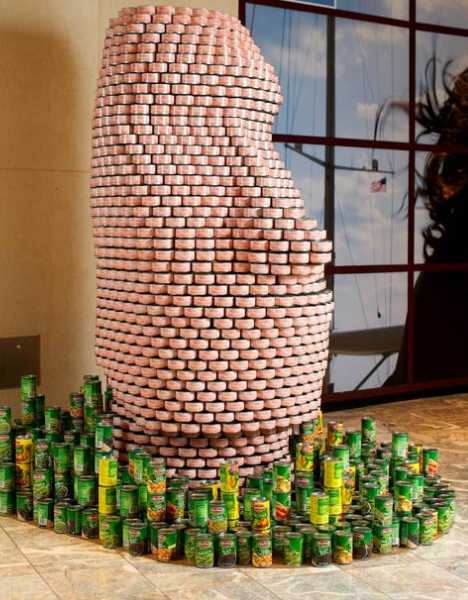 Not to worry, none of the cans (nor the food within them) is wasted. After the show closed November 22nd, food cans used in the displays are donated to City Harvest and distributed to city food banks and other programs providing meals for down & out New Yorkers.

Too Early To Can The Coach? 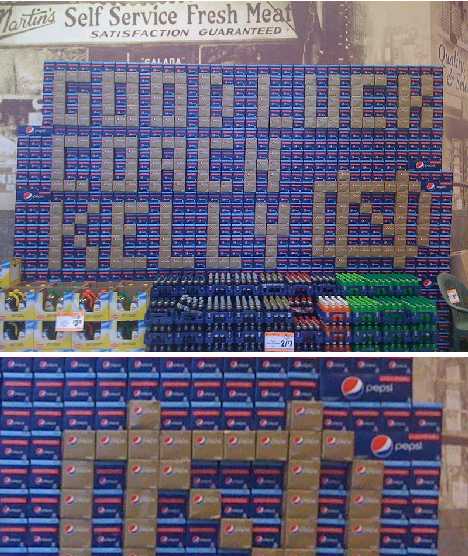 Fans of the Fighting Irish have some unusual ways of supporting their team; new coach Brian Kelly in this case. Actually in a few dozen cases… of Pepsi! The display at Martin’s Supermarket in Granger, Indiana, was set up in August of 2010, shortly before Kelly’s first appearance coaching Notre Dame on their home turf. 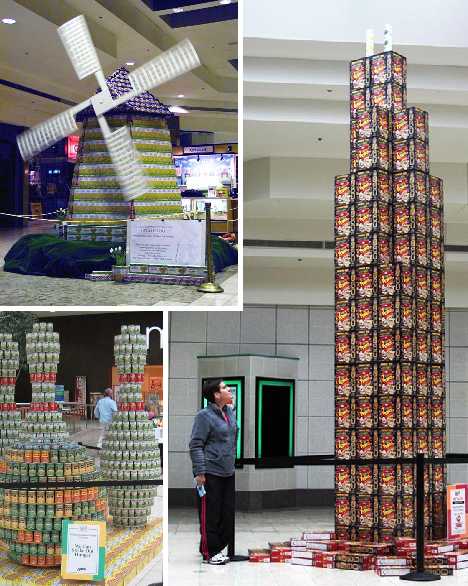 Scene Magazine and the Food Bank of South Central Michigan sponsor an annual competition for the best canned and packaged food sculptures, with all funds raised (plus all food used) going to the local Food Bank. Perennial competitors Kellogg Community College – appropriate name, that – have been topping themselves since 1997. Their most recent effort was a a scale replica of the Willis/Sears Tower measuring 30.5 square inches at its base and standing 17 feet tall. 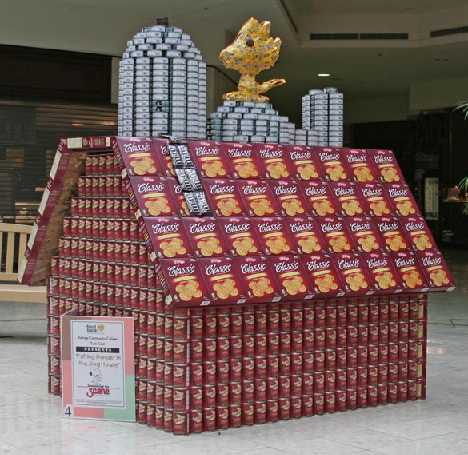 Not only does KCC’s Tech Club have a knack for playing with their food, they also skilfully mix different types of packaging to best advantage, such as the Peanuts composition above that uses cookie boxes to form the sloping roof of Snoopy’s doghouse. Good grief! 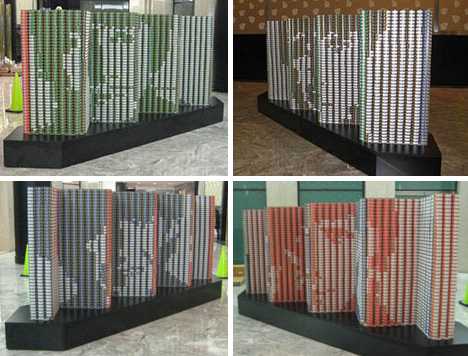 Architectural and Interior Design firm Ted Moudis Associates won the Best Use of Labels category at the 2009 Canstruction competition by portraying The Beatles. It took 5,000 cans of 4 different types of tuna to create a zigzag wall with images of The Beatles on all 4 sides. 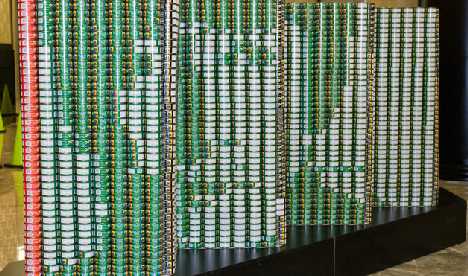 The John Lennon creation is especially poignant as we mark the 30th anniversary of his tragic death. You’ve heard the phrase “canned laughter”? If there was such a thing as canned sadness, this would be it. 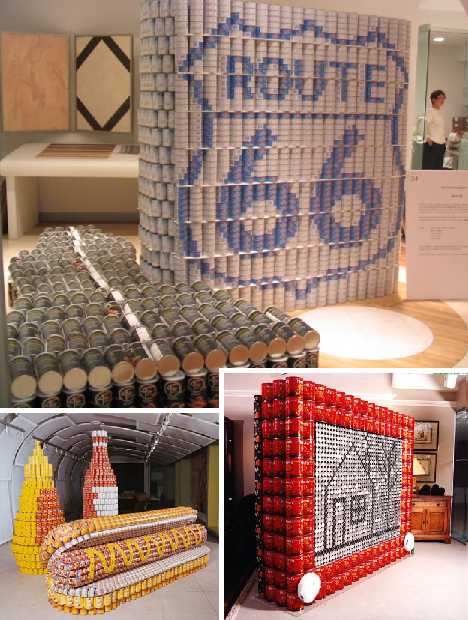 Some of the best-liked can constructions are those that reference pop culture, which these days extends back to the 1950s and the advent of mass communication media in audio (rock music) and video (home television). Get your kicks on Route 66? Step right up!

And, step into the third dimension of creative can construction via this video: 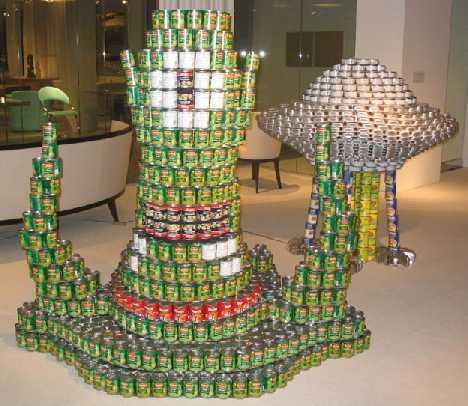 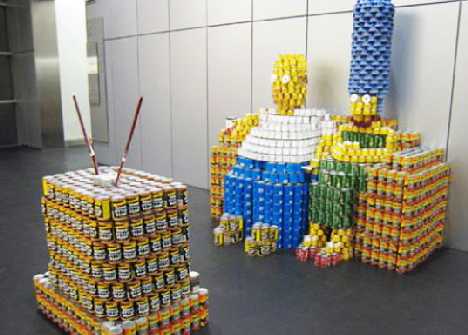 (images via: Big Map and Inhabitat)

Pop culture just keeps on a’popping, as the (above, top) can collage of Kang (or is it Kodos?) from The Simpsons so creatively illustrates. The artist(s) obviously are big fans of the show, taking care to select and position white-labeled cans to represent the tentacled terrors’ ever-present flow of saliva. Just below, appropriately, are Homer & Marge themselves in a scene of modern-day Ameri-CAN-a.

Sea What They Did There? 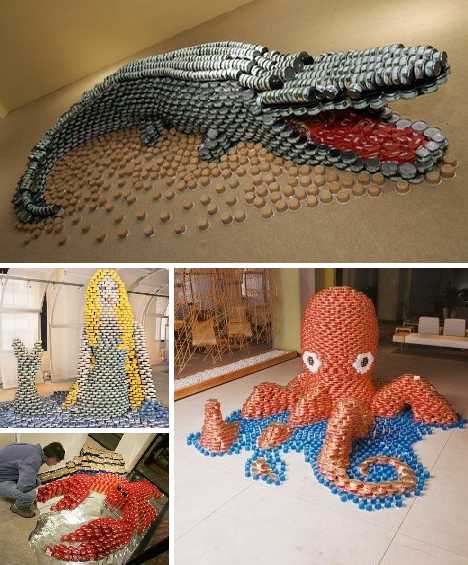 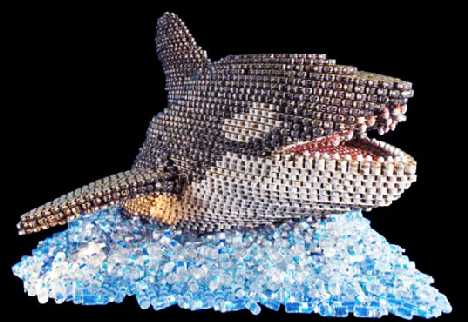 (images via: Of Mice and Men and Inhabitat)

Browse your local supermarket’s canned seafood aisle and witness Neptune’s bounty, conveniently cleaned, cooked, and sealed in tiny tin prisons. Seems to be a cruel fate for nature’s most majestic creatures… if they ever wanted revenge, how would they go about it? 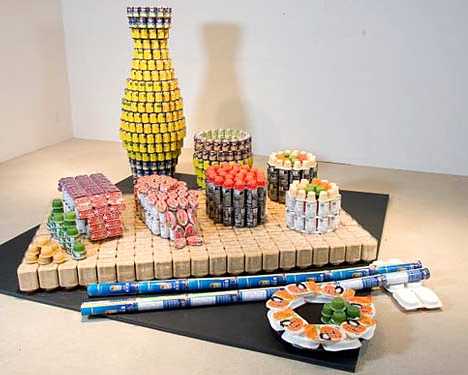 (image via: Of Mice and Men)

If you knew sushi, like I know sushi… but we bet you’ve never known sushi like this! The gorgeous tableau above comes complete with can chopsticks and a classic Japanese tokkuri bottle & cup to hold a LOT of sake. Banzai… or in this instance, Canzai. 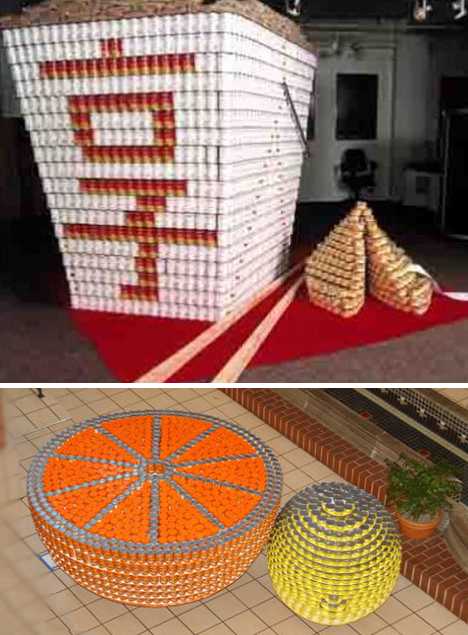 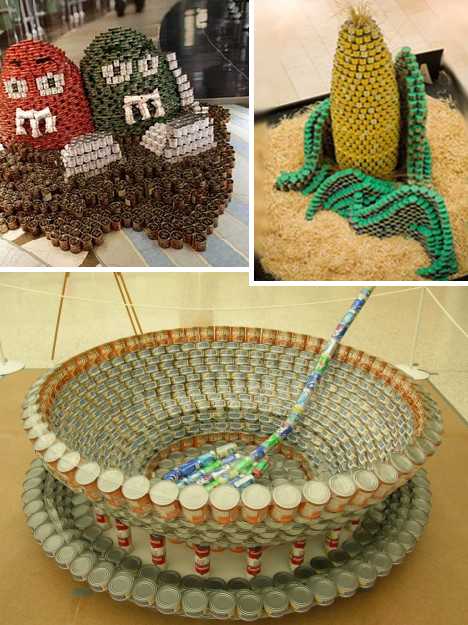 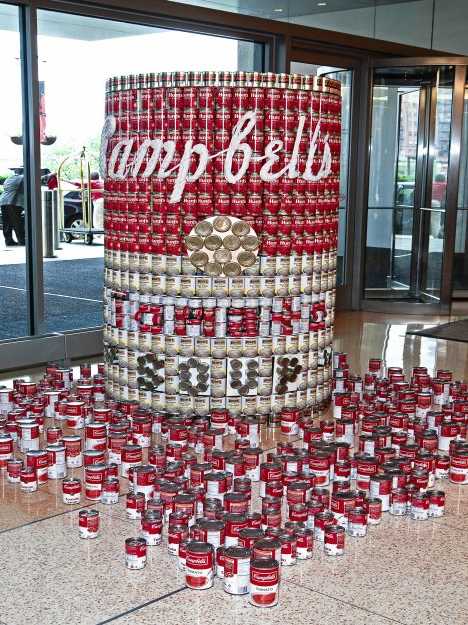 (images via: Inhabitat, My Interesting Files and AIA Chicago)

As art apes art, food follows food… or something like that. The above can constructions twist the concept of the Food Pyramid far beyond the FDA’s wildest dreams – or nightmares. Then there’s the ultimate homage: a Campbell’s Soup can made from Campbell’s Soup cans. Andy Warhol would approve. 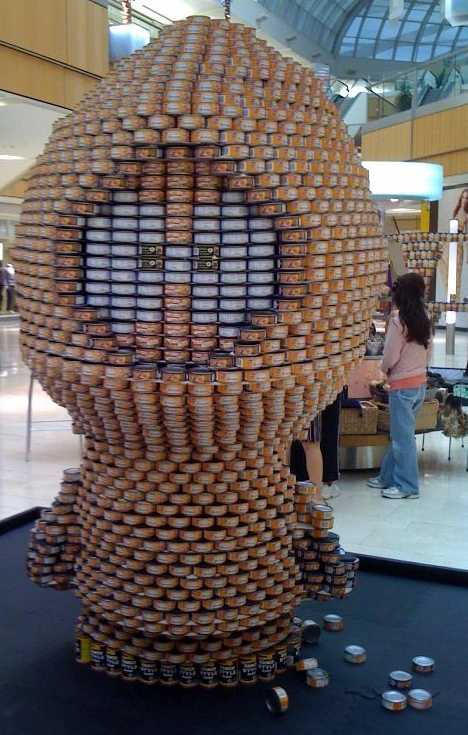 “Oh my God, they canned Kenny!… You bastards!” Yes indeed, South Park’s most unintelligible yet endlessly endearing star has been immortalized in cans by Texas architects PageSoutherlandPage – and using the words “immortal” and “Kenny” in the same paragraph is perfectly OK. 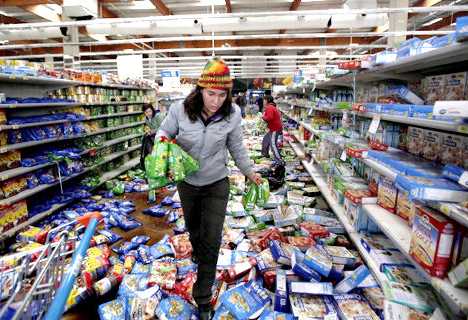 While cans are the preferred medium for supermarket stock artists due to their built-in stackability, sculptures made from so many un-glued or otherwise fastened parts are still inherently vulnerable. One too-curious kid or a 4.5 magnitude earthquake can quite easily cause a can-tastrophe as meticulously constructed structures collapse like houses of metal cards. Viewed virtually and vicariously through images on the Net, these cool creative displays are forever frozen… umm, that would be in aisle eight.