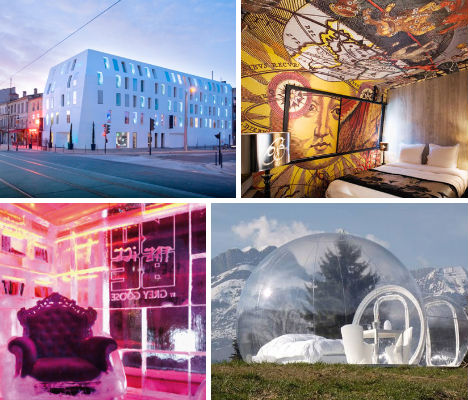 France is known for a lot of things – not the least of which are chic fashion, refined culture and some of the world’s best cuisine. But a well-deserved reputation for elegance and luxury tends to overshadow the fun, kooky side of the country. Forget all those fancy five-star old world hotels in Paris and beyond – these 12 stand out by being modern, artsy, quirky or downright bizarre without sacrificing comfort and style. 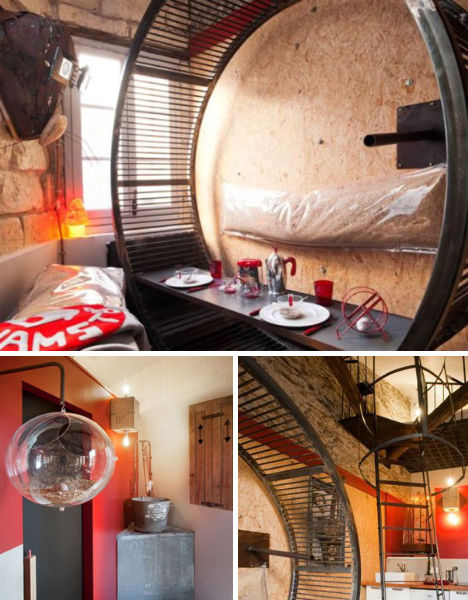 If you’ve ever looked longingly at a hamster cage and wished you could run on a wheel and drink out of a big bottle of water mounted to the wall, there’s a hotel in France just for you. La Villa Hamster has guest rooms designed to resemble hamster cages, complete with haystack beds and wrought iron wheels – including one in the lobby that actually works. To reach the traditional mattress in each room, you have to climb through a tube, and in the bathroom, you have your choice between a regular toilet or a bed of wood chips. 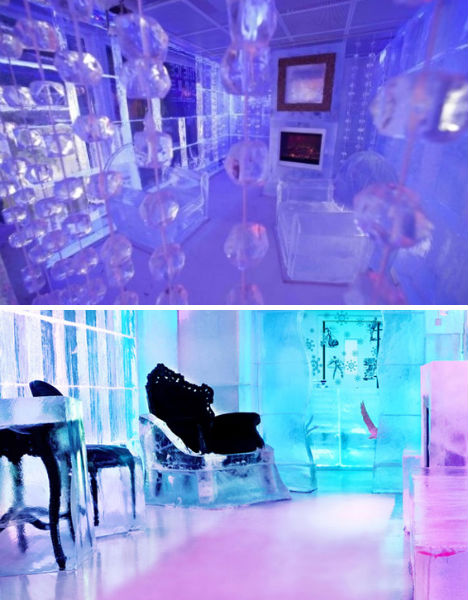 The Kube Hotel gets its name from the look of its reception area – a large glass cube that calls to mind ice hotels in the frigid Arctic. And in fact, among the 41 guest rooms is “The Ice Cube Room by Grey Goose”, where you can sleep in -10 degrees on an ice bed covered with animal skins. Relaxing hues of blue and lilac continue into the remaining guest rooms. 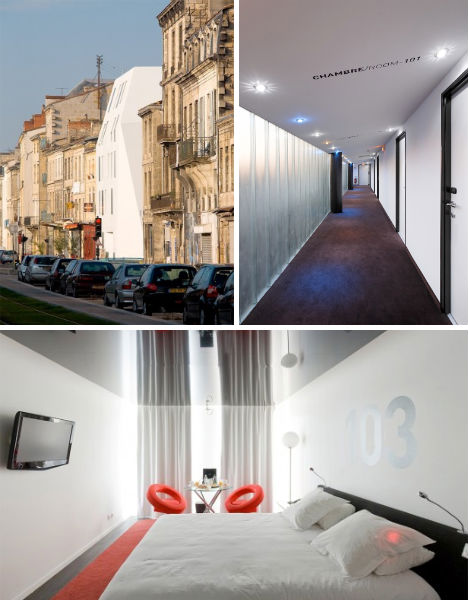 This hotel is impossible to miss. Positioned on the waterfront in Bordeaux on a historic 18th century block, the bright white facade of the Seeko’o is a pop of futurism and serves as a fun, modern home base when touring France’s wine country. 45 rooms outfitted with all manner of high-tech gadgets and gizmos feature large French windows offering a view of the water and black ceilings surrounded with lights, giving the effect of a night sky.

One by the Five, Paris 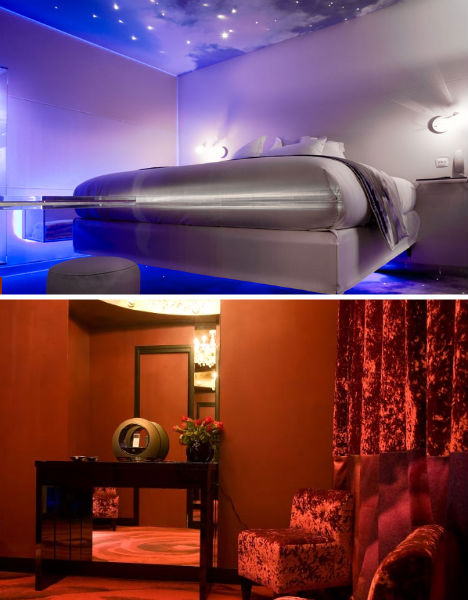 Sumptuous, intimate and sexy: these three words sum up the One by the Five Hotel in Paris. Billed as one of the city’s most romantic hotels, the One by the Five is located in the colorful Latin Quarter and is actually just a single five-room suite with no sign, lobby or staff – you check in at The Five hotel across the street. Draped with velvet and decorated with giant art panels depicting close-ups of human body parts, the hotel even has a purple boudoir full of perfume bottles. 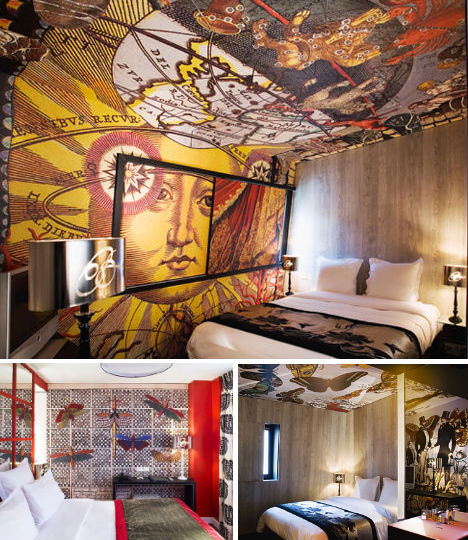 Given a chic makeover by fashion designer Christian Lacroix, Paris’ Hotel Bellechasse is a stunning fusion of 19th century visuals and modern comfort and convenience. Hidden away on a narrow side street in the oh-so-Parisian St. Germain neighborhood, this boutique hotel is a feast for the eyes. 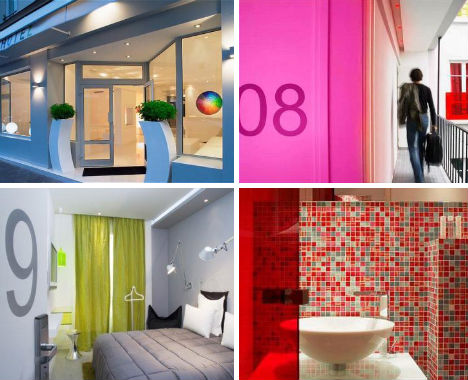 With brightly-colored design details that pop against a minimalist white backdrop, the Color Design Hotel in Paris definitely lives up to its name. Located in the heart of the city between the Place de la Bastille and the Gare de Lyon Station, the 3-star Color Design Hotel has 46 modern rooms that rent for affordable prices in one of Europe’s priciest cities. 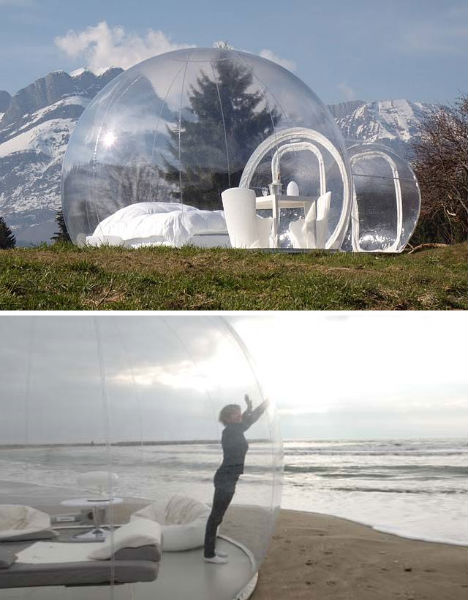 Rent an inflatable, transparent ‘bubble tent’ and place it just about anywhere in the South of France, from the hilly countryside of Mont Blanc to the beach or even in a tree. CristalBubble Hotel is 13 feet in diameter with a king-sized bed; certainly the most comfortable way to sleep under the stars with a 360-degree view. Designed for two adults, the bubbles can be expanded to add a smaller children’s room – or servant’s quarters, if that’s how you roll. 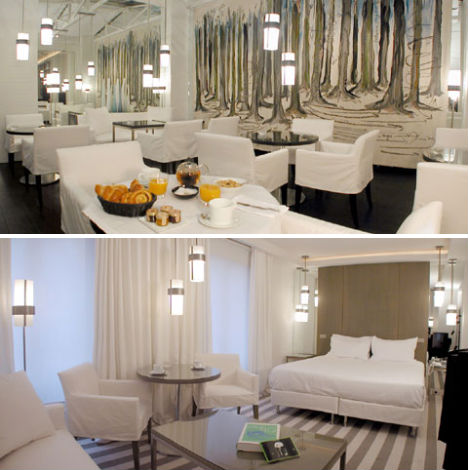 Chic and understated, Hotel le A is a collaboration between designer/architect Fréderic Mechiche and artist Fabrice Hybert, whose understated design sensibilities combine to form a minimalist yet visually interesting and inviting place to stay, just around the corner from the Arc de Triomphe and the Champs Elysées. The hotel’s 25 guest rooms, including 9 suites and one apartment, are all monochromatic relaxation. 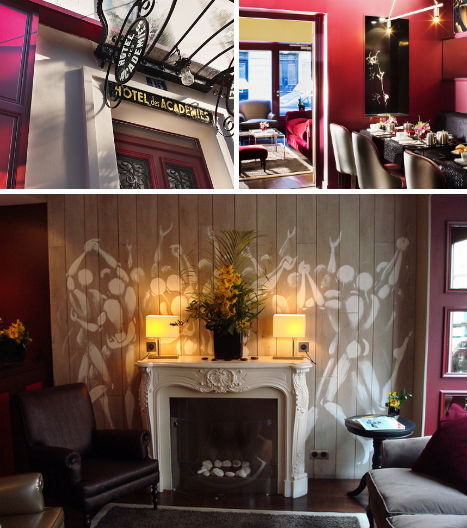 Rated the third best hotel in Europe by TripAdvisor, the Hotel des Academies celebrates the creative arts – fitting for its location in one of the artsiest districts in Paris. Choose from classic or Art Deco-styled rooms designed by artist Jérôme Mesnager and sculptor Sophie de Watrigant – decorated, naturally, with many unique artistic touches. It’s definitely all elegance, and not a budget hotel by any means, but its creative 21st-century interpretation of the modern art culture of the city makes it worth a splurge. 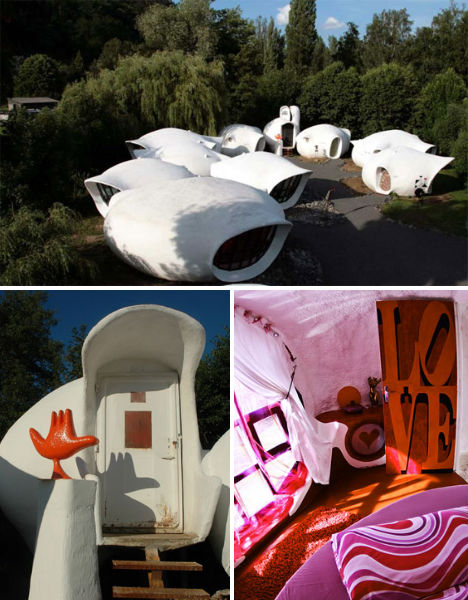 This cluster of 9 quirky bungalows on an island in Eastern France is fantastically retrofuturistic, with groovy interiors full of pop art that seem straight out of the 1960’s. Museumotel‘s bubble suites, which have private bathrooms and a view of the sea, are budget-friendly at €55 (roughly $75) per night. 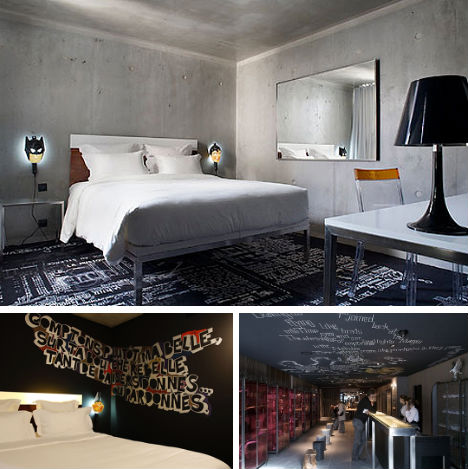 Located in a former garage outside the touristy area of Paris, Mama Shelter is the very definition of cheap chic – designer looks at an affordable price. French designer Phillipe Starcke gave Mama Shelter a hip, young feel with exposed concrete, graffiti-style decorative accents and wacky touches like the superhero masks hanging by the beds. At night, the hotel’s bar is hopping and the Le Fleche d’Or music venue is just across the street. 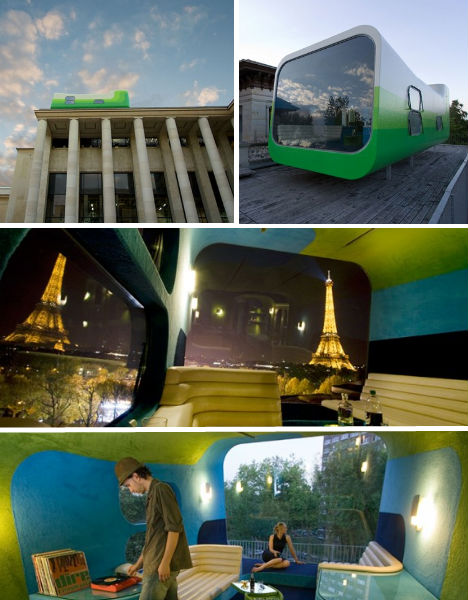 Imagine sleeping in a rooftop pod with a stunning view of the Eiffel Tower. That’s exactly what you got at the ultramodern Hotel Everland, a one-room designer prefab. The traveling exhibit is no longer in Paris, but it was amazing while it lasted, perched above the Palais de Tokyo.