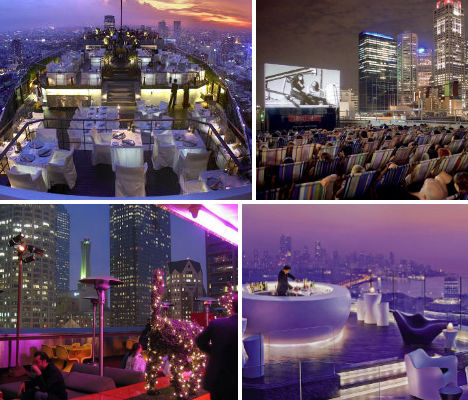 Top-shelf cocktails, fine cuisine and unparalleled views of some of the most exciting cities in the world – what can beat that? These 13 sky bars represent the coolest, most chic rooftop recreation spots in Bangkok, London, Mexico City, Melbourne and of course, New York. Fire pits, live music, movies and stargazing only serve to sweeten the experience. 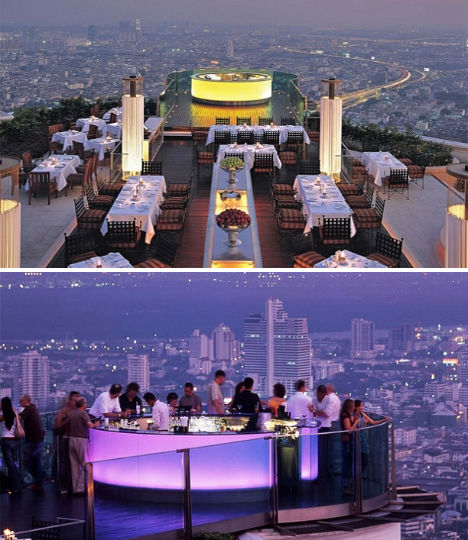 Ascend to the heights of one of Bangkok’s top luxury hotels – the second-tallest building in the city – and gaze over the glass walls of the rooftop deck at the sprawling metropolis below. Not only does The Dome State Tower boast the visually thrilling Sky Bar, but the adjoining restaurant, Sirocco, is said to serve food that’s even more impressive than the view. 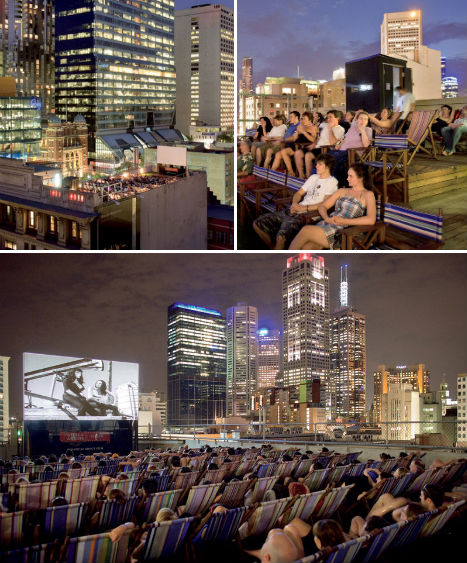 This might just be the coolest movie theater in Australia. Oh, yeah, and they serve alcoholic drinks, too – what more can you ask for? Owned and operated by a team of artists, the Rooftop Cinema plays classic, current and art-house films in the open air on the top of a six-story building. Sit back and relax in a colorful striped deck chair and just try not to be distracted by the bustle of the city around you. 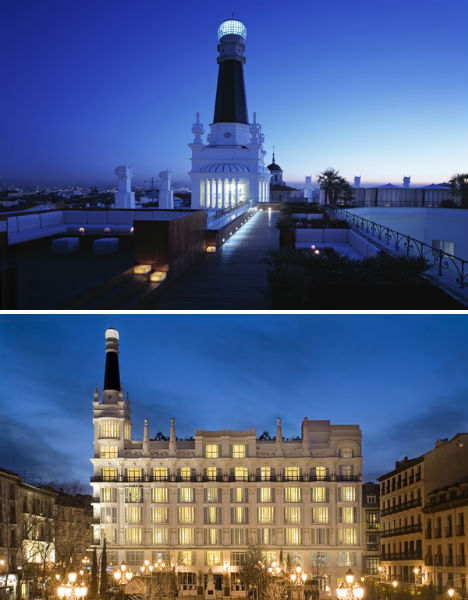 Take in the heart of Madrid from The Penthouse, a skybar owned by entrepreneur Rande Gerber and frequented by stars of both the celebrity and celestial variety. The bar’s open until 3AM but you’d better arrive early, because the view here is so sought-after, there’s always a long line to get in. Find it at the top of Hotel ME Madrid Reina Victoria in Plaza Santa Ana. 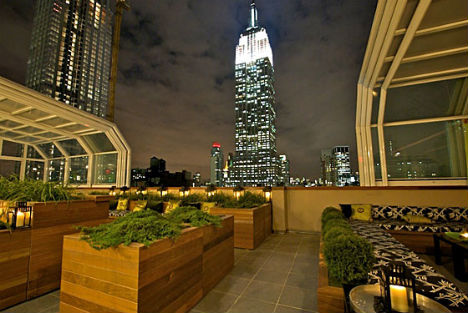 Chosen by New York Magazine as Manhattan’s coolest rooftop bar, The Top of the Strand offers a jaw-dropping view of the Empire State Building four blocks away. With visuals dreamed up by Sex and the City set designer Lydia Marks, The Strand skybar dazzles, keeping patrons warm on chilly nights with an unusual retractable glass roof. 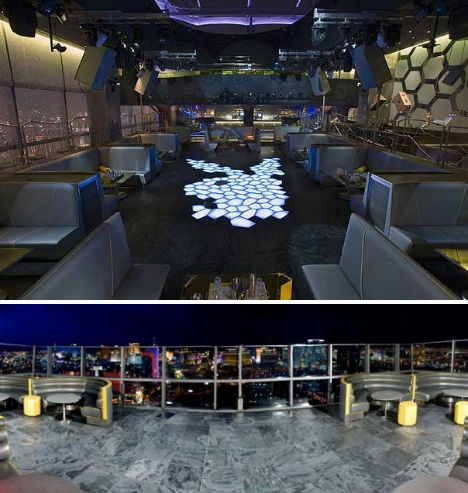 A wild smashup of the Playboy Club and the Palms, Moon is one of Las Vegas’ hottest tickets.  Located on the 53rd floor of the hotel’s ‘Fantasy Tower’, the space age-themed Moon features a large central dance floor with color-changing tiles surrounded by VIP booths, all offering unparalleled views of The Strip. 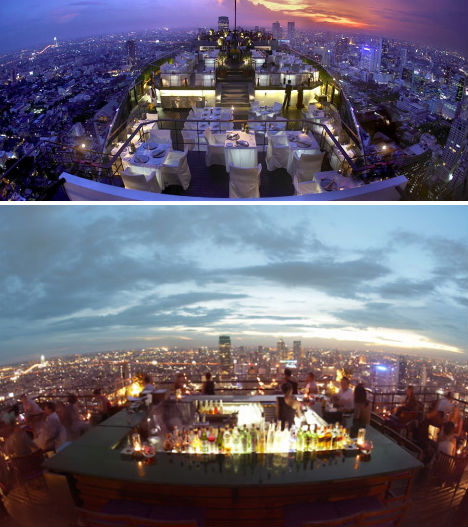 One of the highest al fresco bars in the Asia Pacific, the Moon Bar seems to hover like a spaceship over the chaotic streets of Bangkok. Sip cocktails and partake in canapes, or stroll over to The Vertigo restaurant adjacent to the bar and enjoy premium western cuisine like seafood and steaks. Both the Moon Bar and Vertigo are located on the 61st floor of the Banyan Tree Bangkok Hotel. 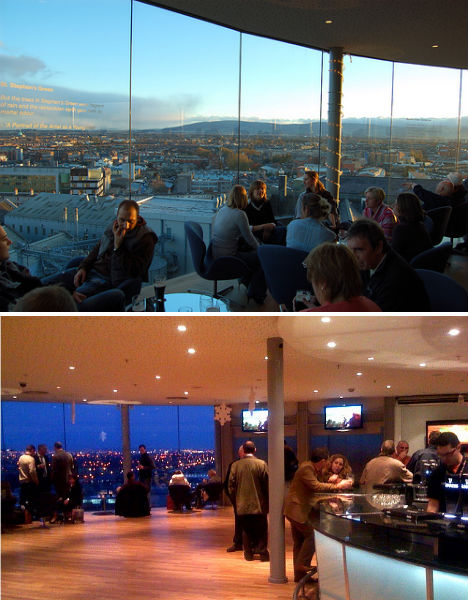 If you’re visiting Dublin, you’ve got to go to the Guinness Storehouse, where Guinness beer is fermented – and naturally, once you’re done taking a tour and working up an appetite for dark yeasty beverages, you’ll want to sit down and enjoy a proper pint. There’s no better place than Gravity, the seventh floor bar with a 360-degree view of the city of Dublin. The glass panels of the walls are printed with James Joyce quotes that relate to landmarks in the distance. 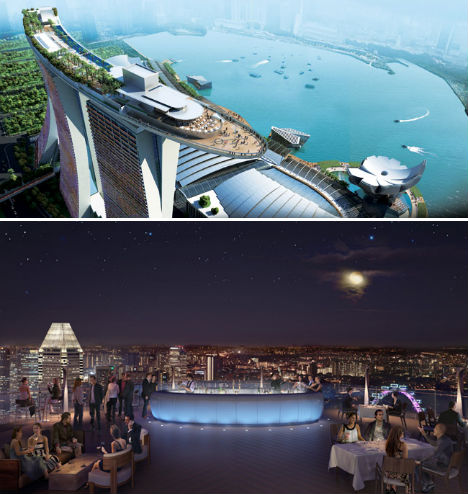 Ever since they pulled off an impressive feat of architecture by topping three 55-story towers with a ‘sky deck’, Marina Bay Sands has become one of Singapore’s ultimate destinations. Just wandering around the SkyPark could keep you busy all day, and when you’re ready to relax, you can take a seat at KU DÉ TA, a rooftop oasis with the SkyPark’s signature views and one of the world’s most stunning infinity pools. 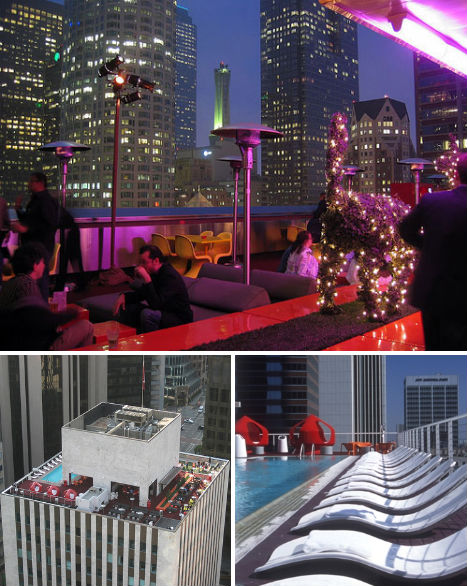 Not only can you catch a stunning view of downtown Los Angeles from atop the Standard Hotel, you can catch a flick projected onto a neighboring skyscraper. The Standard features a dance floor, a pool with curving white lounge chairs and a patio with red waterbed ‘pods’ where you can relax and gaze out at the city. 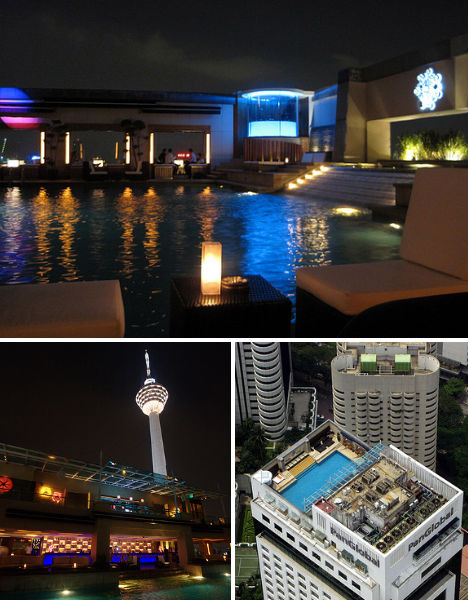 If you want to take in Malaysia’s capital city of Kuala Lumpur – with a drink in hand – look no further than the Luna Bar. On the 34th floor of the Pacific Regency Hotel, beside the KL Tower, the Luna Bar has both upper and lower deck seating areas offering a 360-degree view as well as a tempting swimming pool.

Top of the Gherkin, London, England 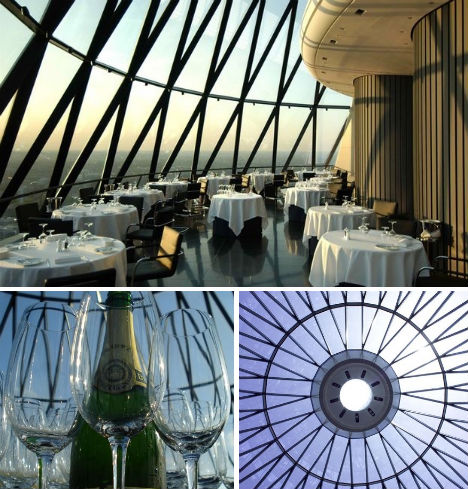 It may be small but the top floor bar at London’s 30 St. Mary Axe, affectionately known as The Gherkin, is an unforgettable experience. Gaze out the geometric windows at the highest bar in London and get a panoramic view of the city, from a vantage point nearly 600 feet above the ground. Not just anyone can waltz in and have a drink here, however; it’s a very exclusive private lounge and dining club. 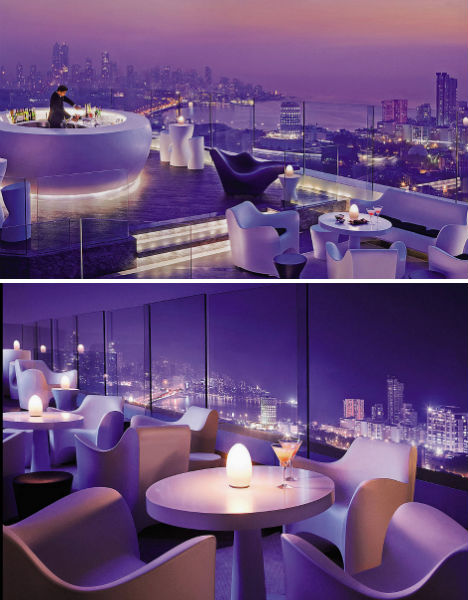 Mumbai’s highest rooftop bar is perched atop the chic Four Seasons Hotel, covering the entire roof of the 34th floor. Aer features modern white furniture and a glass balcony wall that might just give you a little bit of vertigo if you approach it too quickly. 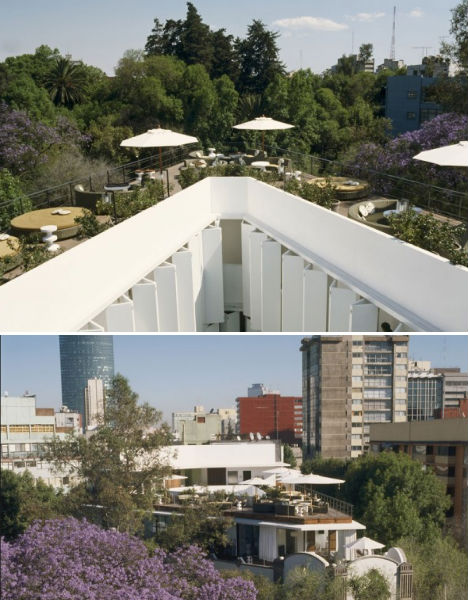 (images via: mr and mrs smith)

The serenity of this rooftop bar, surrounded by lots of greenery, will almost make you forget you’re in one of the busiest cities in the world. The rooftop spa bar at the Condesa DF, a small boutique hotel in Mexico City, features a triangular space of dark wooden decking where sushi is served. Expect lots of charm and character: the wedge-shaped building itself is an architectural landmark from 1928 and it’s located in a very boho-chic neighborhood.