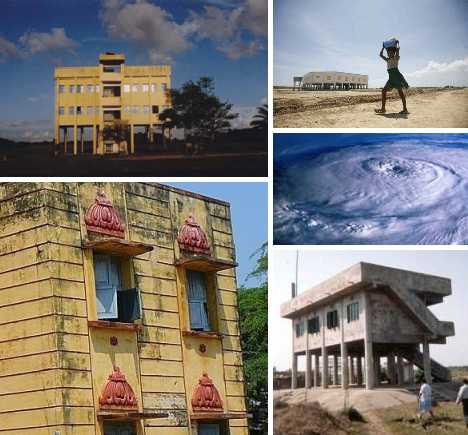 Though cyclones and their associated storm surges have been wreaking havoc on Bangladesh and other South Asian nations for thousands of years, an ongoing program of cyclone shelter construction has given hope to the region while saving lives with every storm. 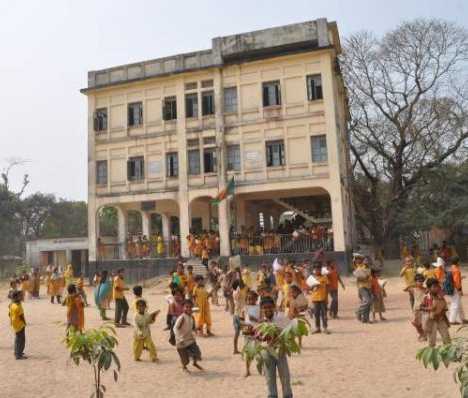 Cyclones and their associated storm surges have been the bane of Bangladesh and other South Asian nations for thousands of years, and thousands of accumulated cyclones have transformed the coastal plains into flat, low-lying death-traps for humans and animals. 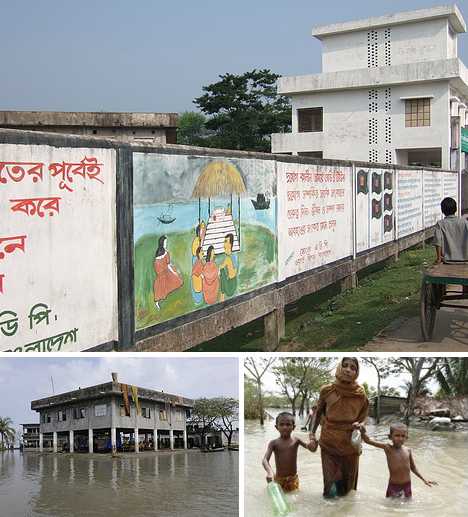 Though the idea of cyclone shelters isn’t new, historically the resources and political institutions required to build sufficient cyclone shelters to serve all the people (and livestock) who need them simply haven’t been available. Things began to change after 1970’s devastating Bhola cyclone and the 1991 Bangladesh cyclone. 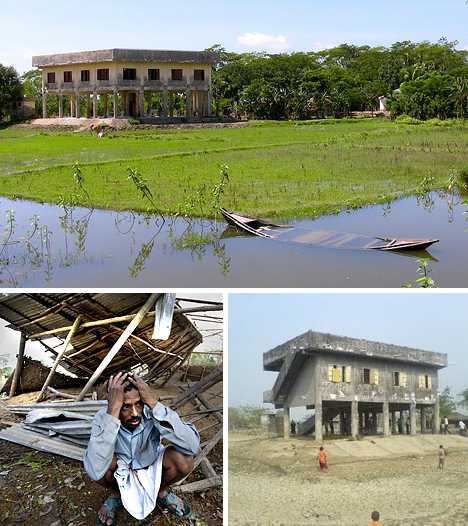 It’s estimated that over 500,000 may have died due to the effects of the Bhola cyclone while the 1991 storm killed less people outright but left up to 10 million homeless. The 1991 cyclone was a much more powerful storm yet “only” 145,000 people died – better communications, a centralized government and hundreds of new cyclone shelters were contributing factors to the much-reduced death toll.

Building Up for a Disaster 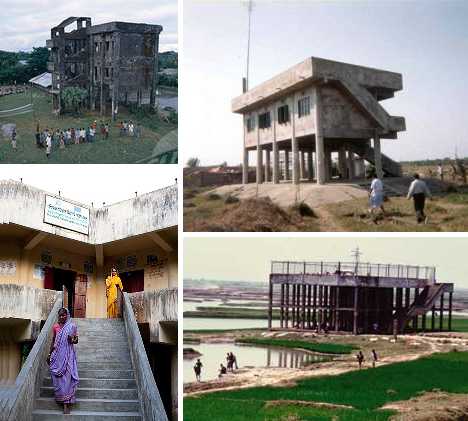 The Bhola cyclone was the final straw leading to revolution in the former East Pakistan, as the devastated population felt ignored and neglected by the government situated in far-off Islamabad. Post-cyclone reconstruction commenced in conjunction with war recovery and nation-building – little if any resources were available to prepare for the next cyclone and existing structures were deprived of essential repairs and maintenance. 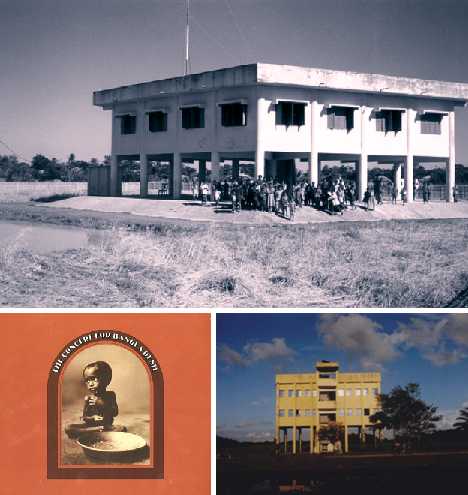 Charitable contributions poured into Bangladesh, most famously via the Concert for Bangladesh conceived and organized by the late George Harrison. Some of these donations were used to construct cyclone shelters along Bangladesh’s most vulnerable area: the Bay of Bengal coastline. It’s estimated that in May of 1997 when a dangerous cyclone roared in from the Bay of Bengal, over one million people took refuge in cyclone shelters and the death toll was limited to roughly 100. 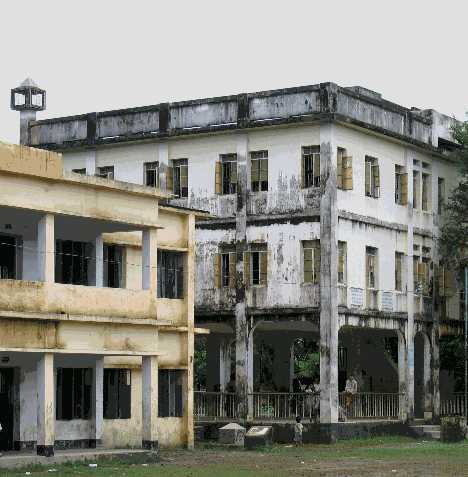 (images via: Geographic Alliance of Iowa)

The ramshackle, heavily-mildewed cyclone shelter above took in an amazing 3,000 refugees at the height of the 1997 cyclone. 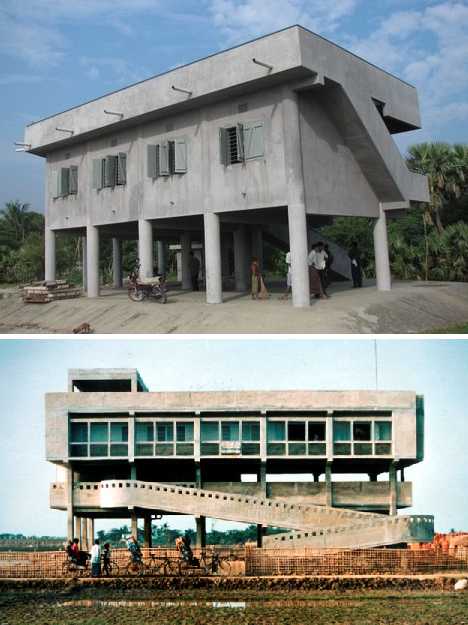 The new structures dispensed with decorative frills and their designs focused on functionality. Salient features of these cyclone shelters included concrete construction with a raised base on “stilts” to avoid flood damage and wide, flat roofs with access from below to facilitate egress via helicopter. The area beneath the building at ground level is often also raised to allow space for livestock to take cover. The performance of these modern cyclone shelters during and after the 1991 cyclone proved their worth and building continued post-storm in more isolated areas.

Lessons of the Storm 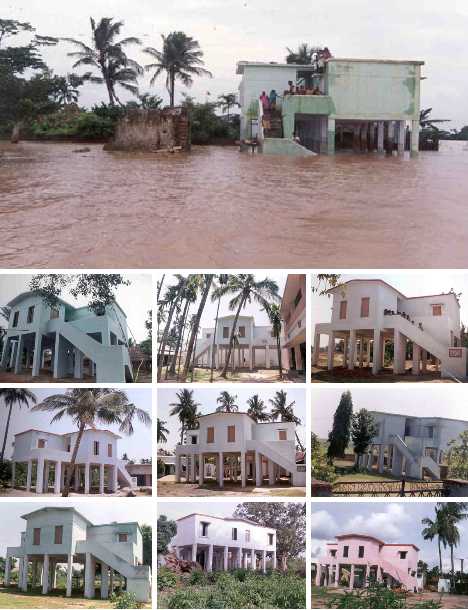 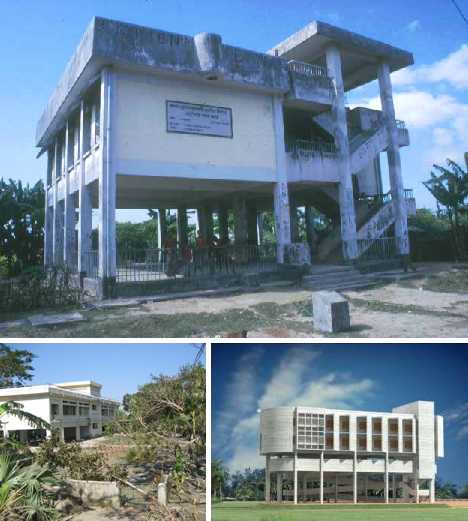 (images via: UWEC, OneWorld and BDNews24)

The problem of multi-functionality is one that perhaps has bedeviled designers of cyclone shelters the most. Ideally, cyclone shelters are temporary structures to be used only for a day or two. They’re bare-bones buildings in the purest sense: no electrical wiring, no gas or water piping, no plumbing, no toilets and (often) no windows. Including these amenities would substantially raise building and maintenance costs when the overriding aim is to construct as many shelters as possible with a limited amount of resources. 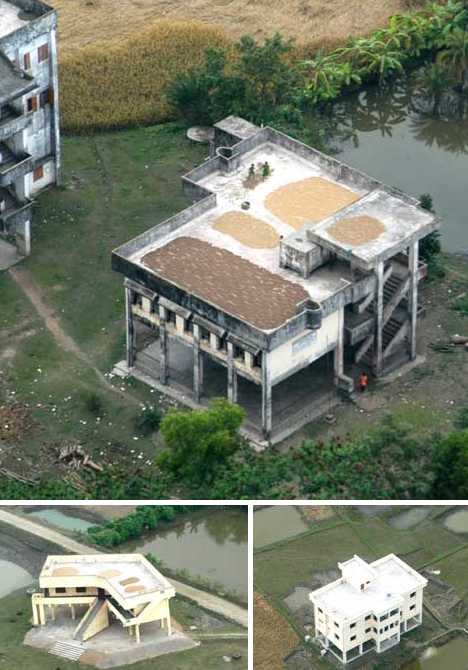 Functional doesn’t necessarily have to mean plain, bland or even ugly. Some cyclone shelters display a distinct charm and a perceived lightness of form, a sense that contradicts their built-in strength and solidity. 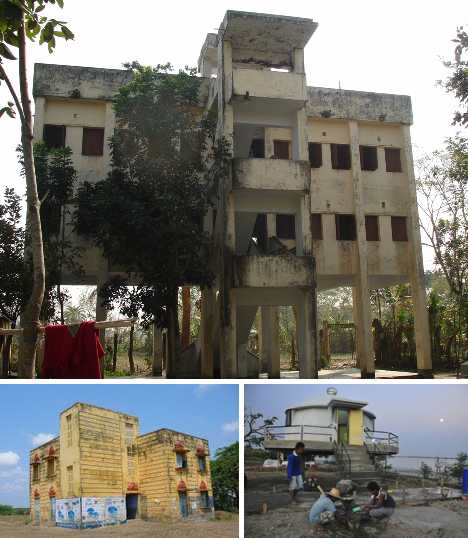 With no local owners, permanent residents or regular maintenance, cyclone shelters can fall into decay and disrepair. This is a sad fact in many parts of Bangladesh. It’s not that the authorities aren’t aware of the need to keep the shelters ready for the worst; the age-old lack of resources, funds and organization means even the strongest cyclone shelters ca age very badly. 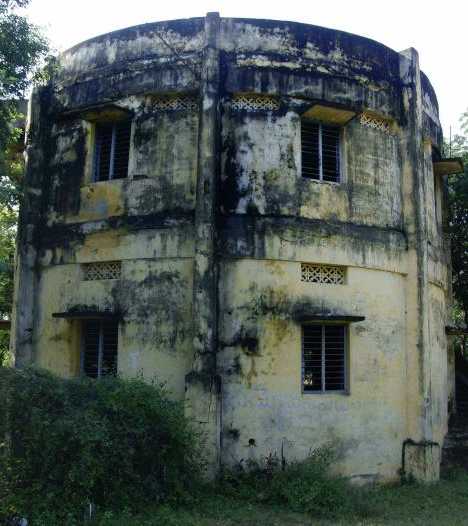 (image via: The Hindu)

Residents of towns and villages where cyclone shelters have been neglected are noticing a host of associated issues. “The cyclone shelter has become a den for gamblers, drunkards and other anti-social elements in the village,” said an anonymous local woman in one village. “The building too is in a dilapidated condition, so we request the district officials to dismantle the structure immediately.” One hopes she won’t regret her wish someday. 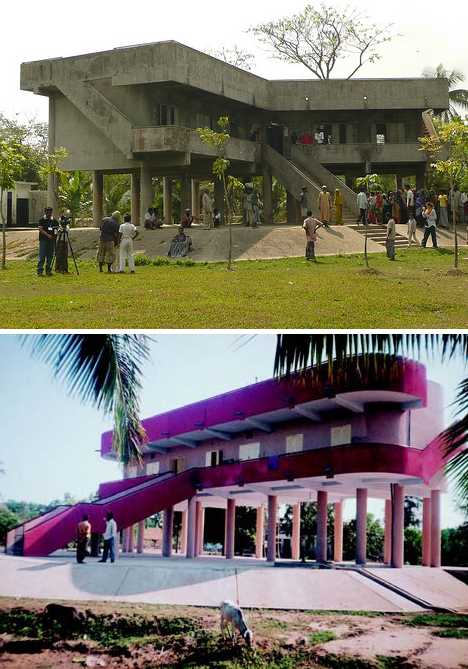 Neglect isn’t always the fate of cyclone shelters between storms, however. In some villages, the locals take it upon themselves to provide regular upkeep and remind one and all that these oddly built buildings could save their lives some dark and stormy night. The image above is especially interesting – the lower cyclone shelter would look right at home in South Beach… minus the goat. 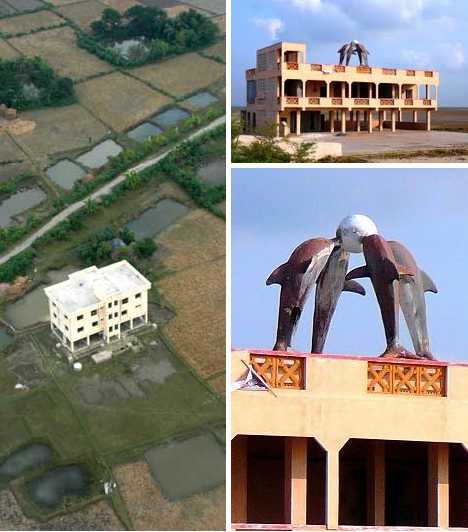 (images via: UWEC and Diviseema.info) 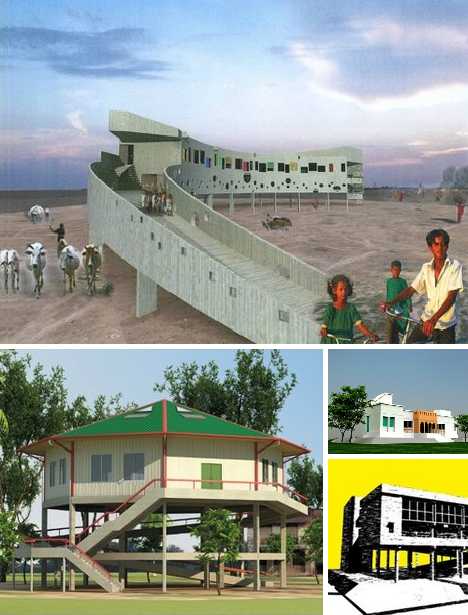 Maybe the field of cyclone shelter design is getting a bit too rarified, straying from its intended purpose and disregarding the practicalities of building severe-weather-ready structures in Bangladesh? The 2009 Fael Khair Cyclone Shelter Design Competition provided a window into the motivations of up & coming designers who might try weathering an actual cyclone before putting pen to paper. KISS, people! 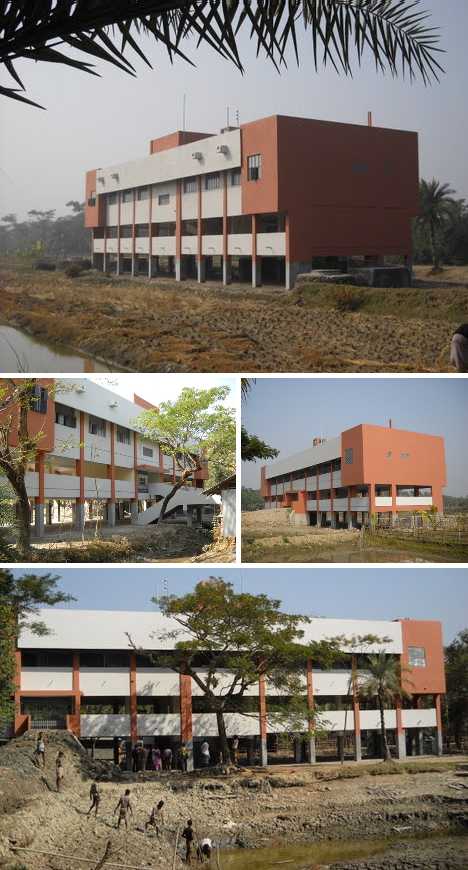 The cyclone shelters above were built by the Swiss Agency for Development and Cooperation (SDC) in 2010, and to say they look out of place is an understatement. 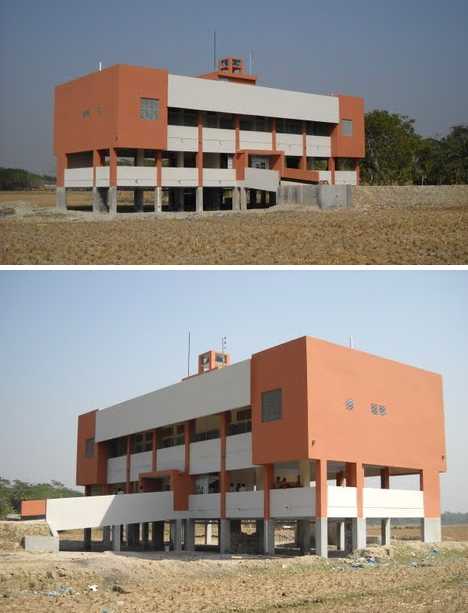 It’ll be interesting to see how these “schools on stilts” handle the fury of a full-blown tropical cyclone and, knowing Bangladesh’s history of severe cyclones, we probably won;t have to wait too long. 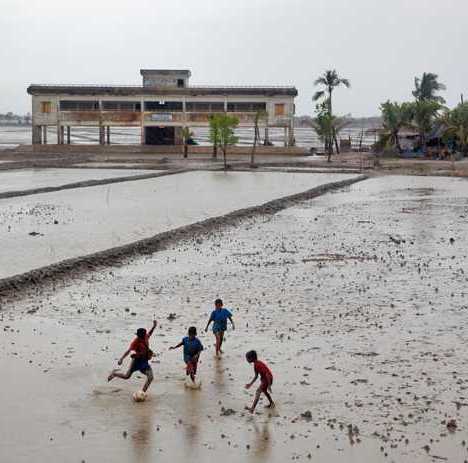 (image via: Your BD News)

In Bangladesh, “any port in a storm” often means the local cyclone shelter. Ungainly in appearance, often impractical for other uses, occasional hangouts for undesirables… cyclone shelters certainly have their pros and cons but when the sky darkens and the waters rise, you can bet your life all the negatives will be forgotten.