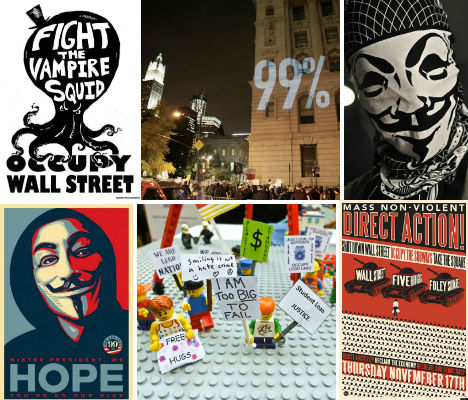 The arts are indelibly entangled with the passion and politics of the Occupy Wall Street movement, helping to give it a face and a voice, and to unify, educate and inspire participants and onlookers alike. The Occupy protests have their own printing press, screen printing labs, artist guilds and spinoff protests including Occupy Museums and infiltrating Sotheby’s auctions. These 21 designs, ranging from guerilla spoofs to bat signal-style projections, are among the standouts of the art that has sprung from the movement.

Find lots more on Twitter by searching for the tag #OccupyArt. 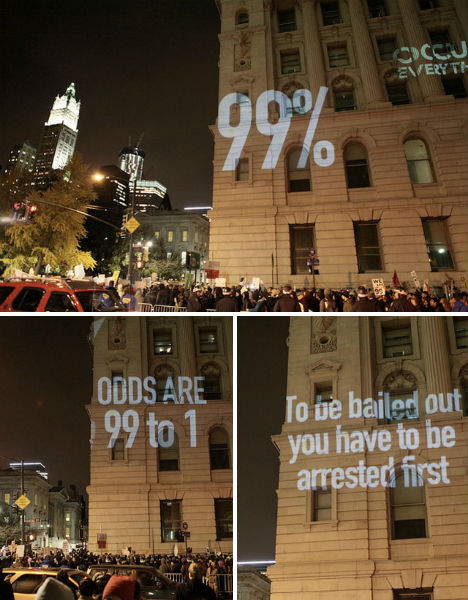 Occupy Wall Street protesters got a pick-me-up in the form of projected messages on the side of New York City buildings on November 17th. Activist Mike Read organized the effort, which included such encouraging and motivational messages as ‘The Beginning of The Beginning; Look Around, You Are Part Of A Global Uprising; We Are Unstoppable and Another World is Possible.  Read projected the messages from an apartment opposite the Verizon building. 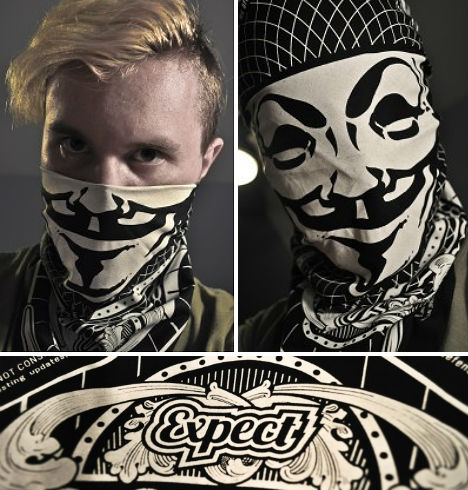 Says designer Matthew Borgatti on his blog, “After seeing protests erupt all over the world I wanted to make something that could change the game a little. I want people to be able to protest with OWS without the risk of being fired for showing solidarity. I wanted to make something useful, portable, something that could make the biggest difference to the most people. I came up with this mask.”

These bandannas, hand-printed with an image of the infamous figure Guy Fawkes, are made in a small print studio in New Jersey. They’re available in Borgatti’s Etsy store, and for each one purchased, the designer is donating one to an Occupy Wall Street branch round the world. 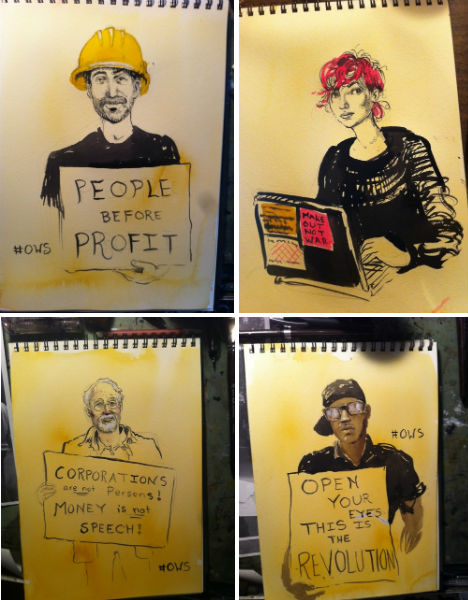 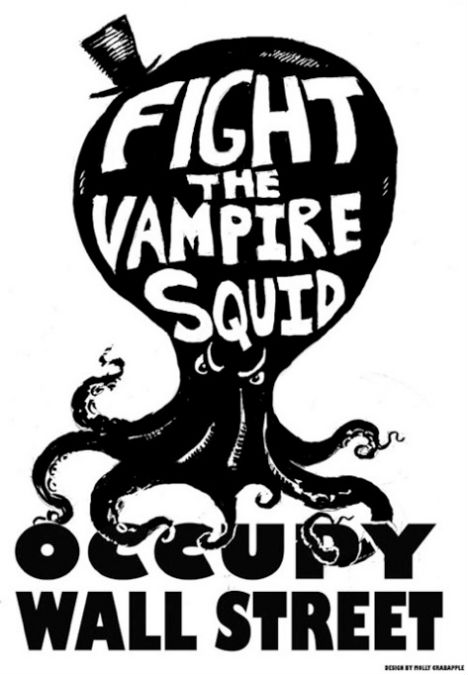 New York illustrator Molly Crabapple, who lives adjacent to Occupy Wall Street’s former headquarters at Zuccotti Park, has captured the Faces of Occupy Wall Street in her signature style. Crabapple has also produced a number of posters related to the movement, notably ‘Fight the Vampire Squid’. Get high-res printable copies, stencil art and vector art of the latter at Crabapple’s website. 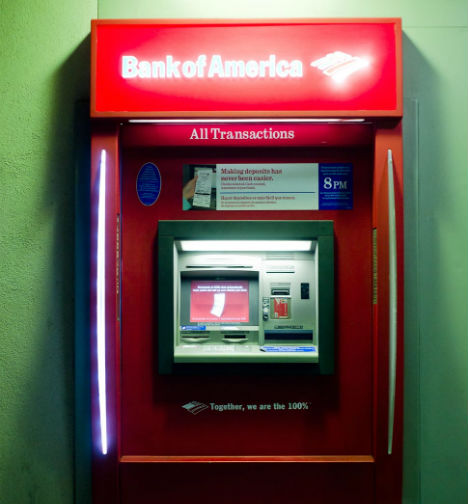 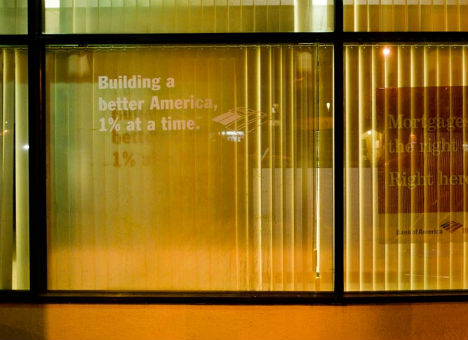 Bank of America inadvertently exposed where they likely stand on the Occupy movement with this guerilla ad campaign, noted in San Francisco’s Mission District around November 17th.  The vinyl appliques bear messages like ‘Together, we are the 100%’ and ‘Building a better America, 1% at a time.’ It’s unclear who’s responsible for the campaign and whether the stickers are still up. 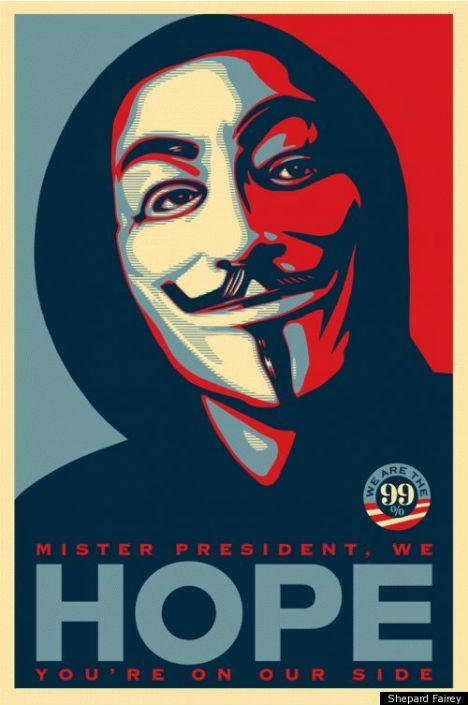 Shepard Fairey, who designed one of the most iconic images of Obama’s presidential campaign, is back with a challenge for the man he helped promote into office.

“This image represents my support for the Occupy movement, a grassroots movement spawned to stand up against corruption, imbalance of power, and failure of our democracy to represent and help average Americans. On the other hand, as flawed as the system is, I see Obama as a potential ally of the Occupy movement if the energy of the movement is perceived as constructive, not destructive. I still see Obama as the closest thing to “a man on the inside” that we have presently. Obviously, just voting is not enough. We need to use all of our tools to help us achieve our goals and ideals. However, I think idealism and realism need to exist hand in hand. Change is not about one election, one rally, one leader, it is about a constant dedication to progress and a constant push in the right direction. Let’s be the people doing the right thing as outsiders and simultaneously push the insiders to do the right thing for the people. I’m still trying to work out copyright issues I may face with this image, but feel free to share it and stay tuned…” 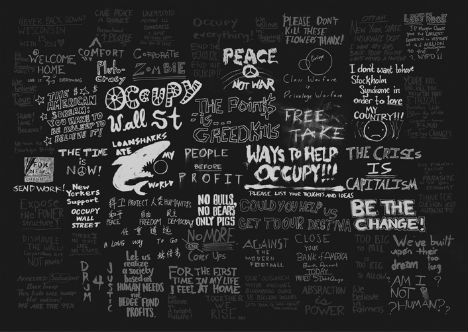 After a visit to New York City, Australian illustrator Matt Huynh combined the many messages that he saw on protest signs at the Occupy Wall Street demonstration and combined them into one big black-and-white mash-up. You can download a high-res version to use as a sign here. 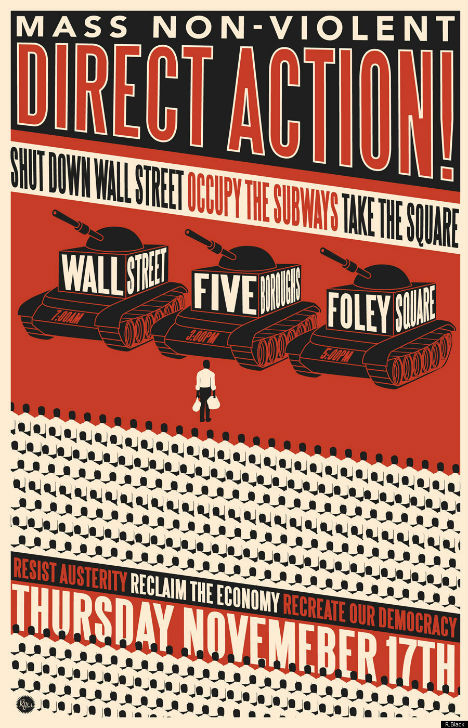 Among the more controversial OWS-related works of art and design is this Tiananmen Square-inspired image by R. Black. The poster references the ‘Tank Man’ image of 1989’s protests in Beijing, which resulted in the deaths of 400-800 non-violent civilians. 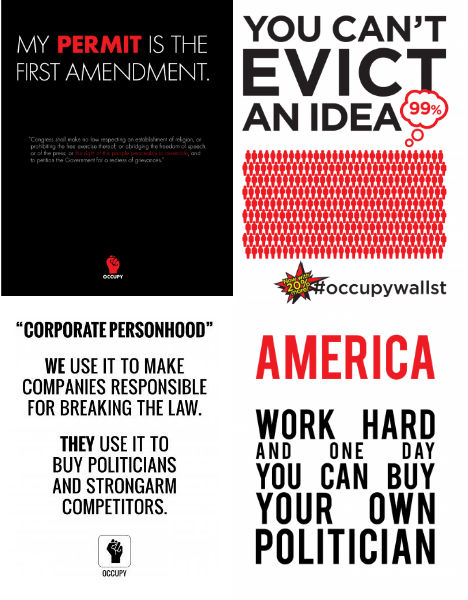 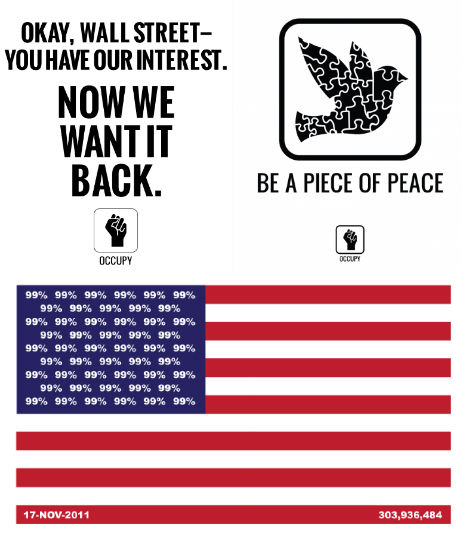 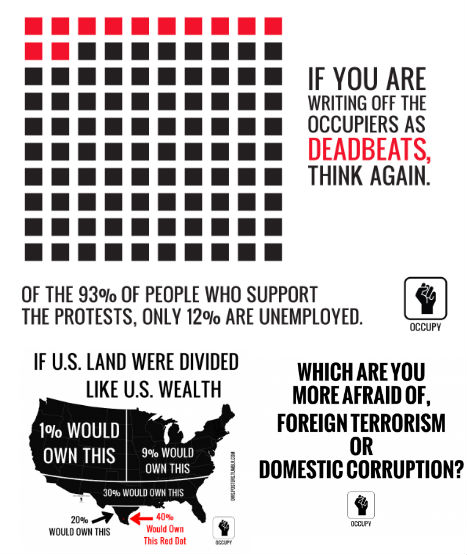 Need to print highly graphic, readable and poignant posters for your local Occupy protest? A number of designers are donating high-quality, high-resolution infographics to Occupy Design, which aims to ‘build a visual language for the 99 percent.’  There are also a number of logistical signs available that point out trash cans and restrooms, and enable Occupy participants to make their voices heard in an orderly and effective manner at assemblies. 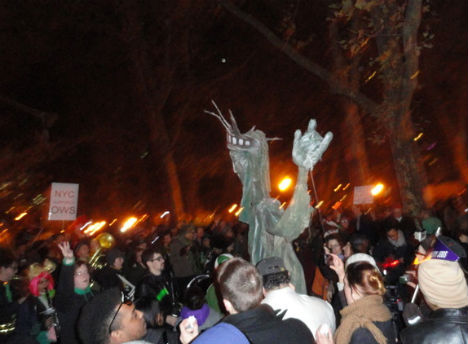 Occupy Wall Street has its very own puppet guild, just one of the many guilds under the movement’s Arts and Culture working group. Puppeteer Joe Therrien built the 12-foot Statue of Liberty puppet that has paraded around New York, and other puppets have popped up in recent weeks. 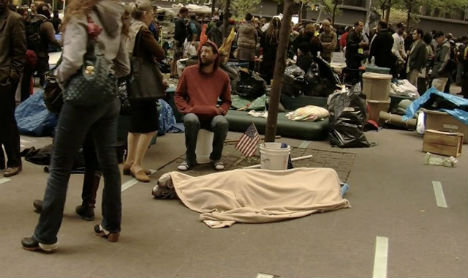 Perhaps it’s a little redundant since it literally can’t be discerned from among the many actual living people sleeping under blankets on the streets, but this sculptural installation by Norman Kirby is meant to be a tribute to those who are living this life on a daily basis. Kirby says he was inspired to create the sculpture after sleeping on the ground himself and realizing that, well, it kind of sucks. 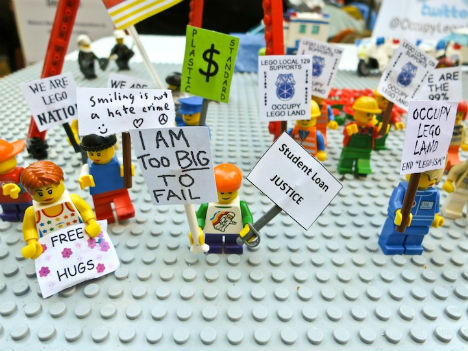 On a far lighter note, the Occupy Wall Street protests have inspired a tongue-in-cheek installation that miniaturizes the movement. Occupy LEGO Land can be found in the midst of the demonstration itself in New York, proclaiming a motto of ‘We must not be Lego ‘Lands’ – We must be a Lego NATION!’ Check out their Facebook page for more.