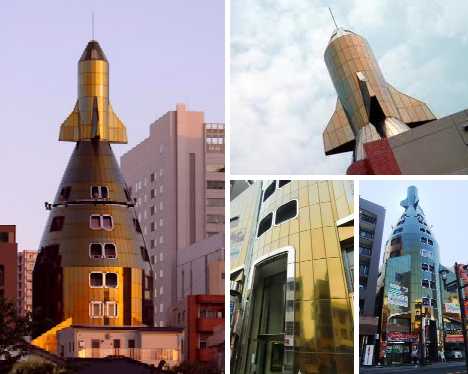 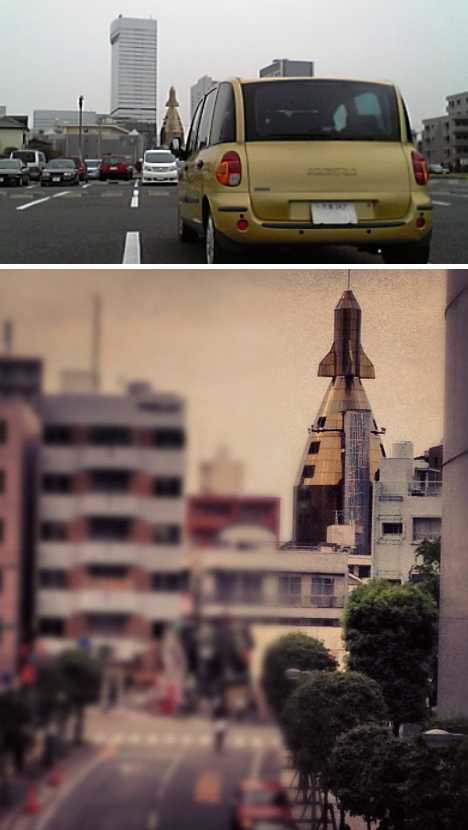 (images via: Film Crew It’s Own and Irostagram)

“I’m the urban spaceship, baby, I’ve got speed. I’ve got everything you need!” Well maybe not everything, but the Rocket Building in Sakuragi-cho, Omiya, Saitama – just north of Tokyo, Japan – can certainly be said to have speed even though it hasn’t moved a millimeter since it was completed back in the early 1980s. 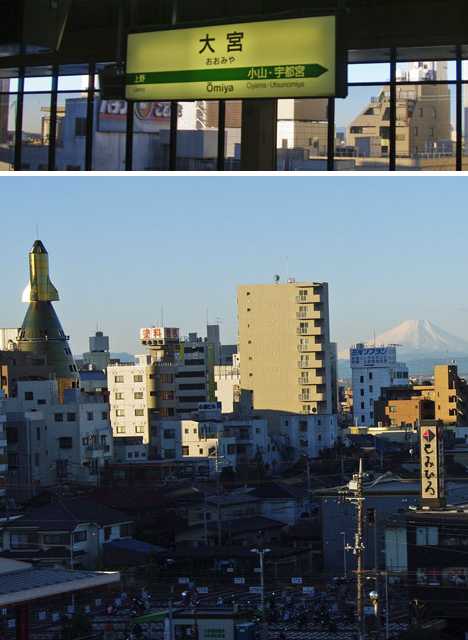 The Rocket Building was one of a number of offbeat edifices that sprung up in and around Japan’s major cities as the country’s economic bubble inflated. Low interest rates, reasonable real estate prices and a steady flow of government funds into the construction sector saw projects approved which would normally never see the light of day. 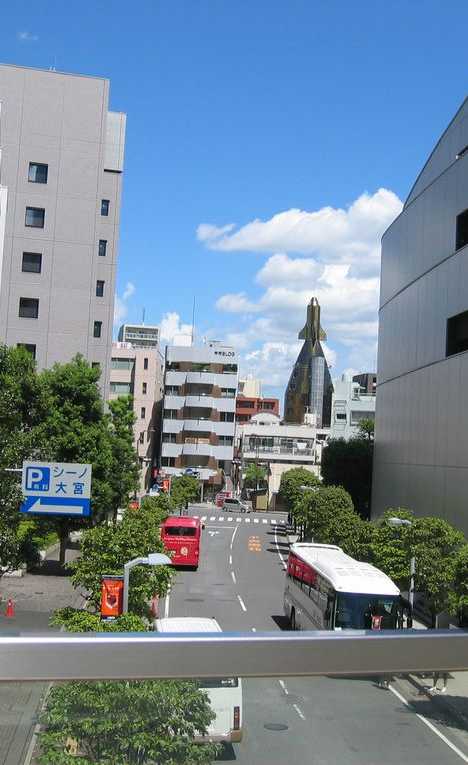 By the mid-1980’s, Japan’s economy began to show signs of overheating. A combination of rising stock prices, increasing land values and a shortage of urban building space proved to be the death knell for one-off projects like the Rocket Building. 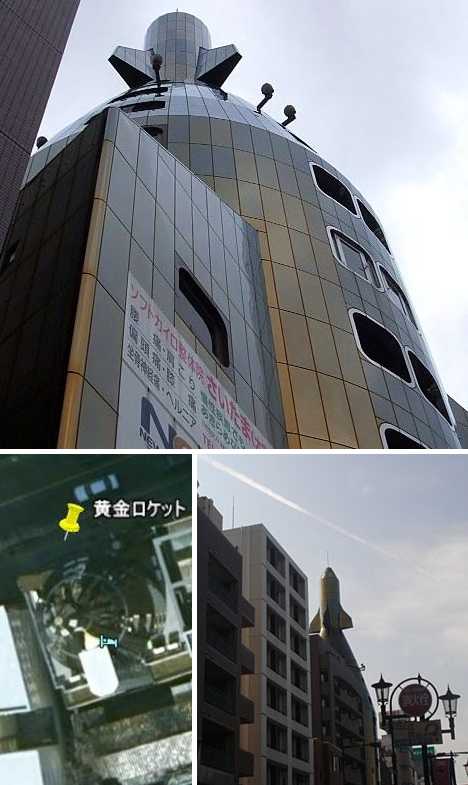 (images via: I Was Walking Thousands Bloom, Earth Exploration Journey and Beegle)

A building is a building, however, and in super-dense urban Tokyo no habitable structure goes to waste. As odd as the Rocket Building looks on the outside, its theme park ambiance slips away once one enters the chrome-edged surround of the cavernous front entranceway. We’re not sure if the Rocket Building has a doorman but if it did, he would likely be tempted to greet visitors with a cheery “All aboard!”

Lifting Off the Lid 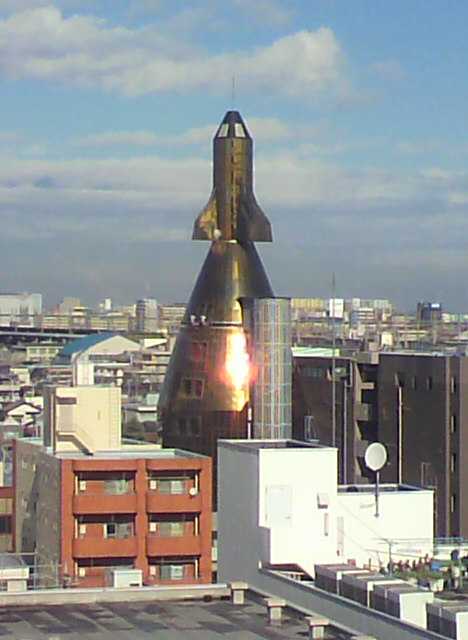 The Rocket Building may have originally housed a private museum though those days are long past. These days, the building’s owners lean more to the commercial than the artistic figuring there’s a niche market for tenants who appreciate the allure of living or working in a rocket-shaped building. hey may be onto something: just imagine your very own bachelor “pad” inside this 9-stage, er, 9-story structure! 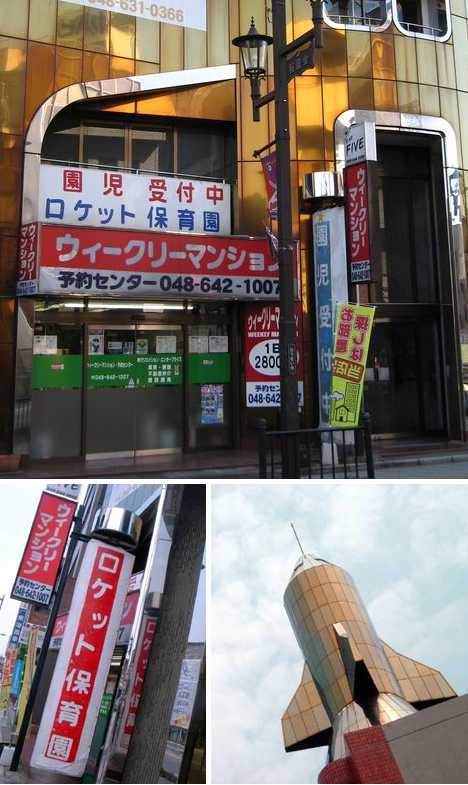 Tenants renting space in the Rocket Building have changed from time to time. Some, such as the Rocket Nursery, are more than happy to play off their location as a way to distinguish themselves from competitors. 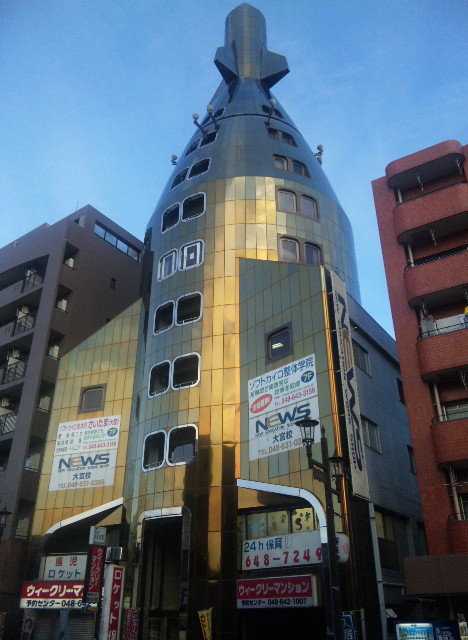 How thrilled must pre-school age kids 6 years old or younger be to find out their school (or rather, a flexible-hours daycare) is located inside a sky-high shining rocket? Curiously, the Rocket Nursery is open 24 hours a day – in space there’s no night or day, it would seem. 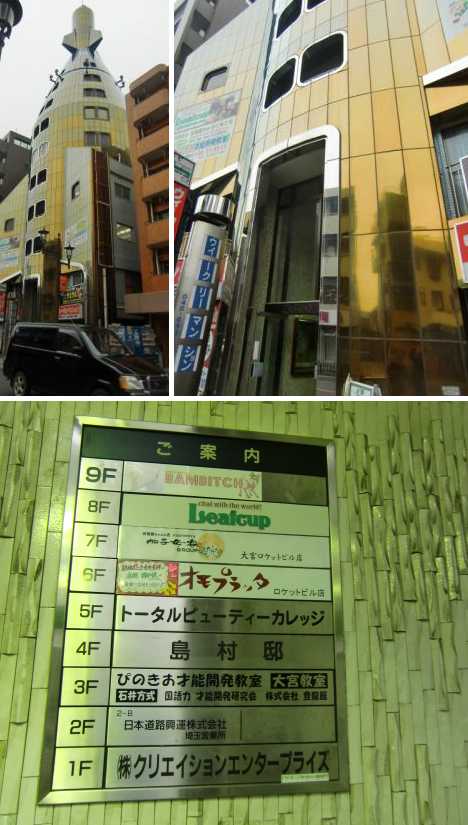 The landlords of the Rocket Building currently rent space on an ad-hoc basis with an odd assemblage of businesses rubbing shoulders within the structure’s confines. At one point the tenants included a “conversation cafe” called Leafcup, the Total Beauty College, and occupying the 9th floor something called “Bambitch” which sounds a lot more awesome than it probably is. 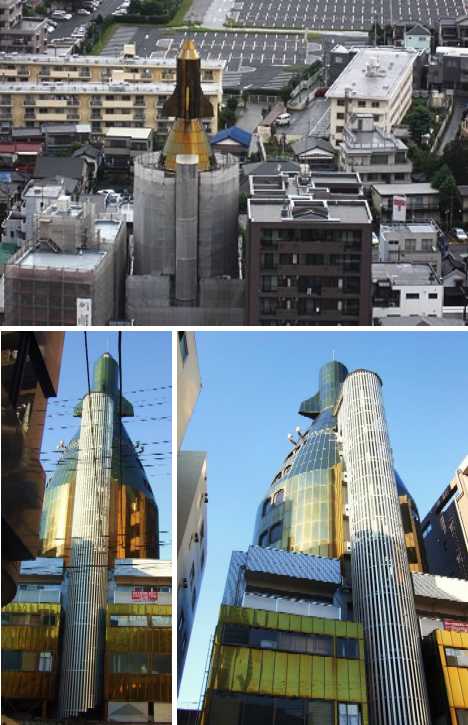 (images via: Chandra’s Life and Dragonfly)

Most images of the Rocket Building focus on its easily accessible, street-facing front but the building’s rear offers a heady dose of visual interest as well. Note the gold-toned wall panels that one might think aren’t really necessary and the curious cylindrical structure whose exact purpose isn’t obvious. Chimney, elevator shaft, garbage disposal, tower gantry? 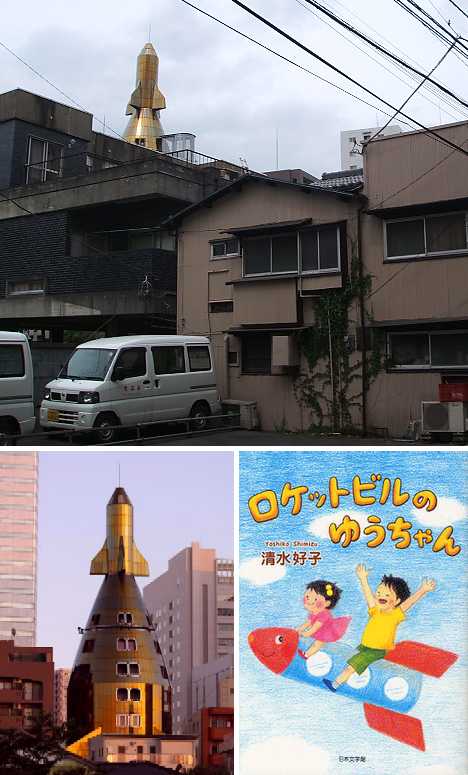 As much as the Rocket Building’s appeal is a function of its colorful neighborhood, the latter also derives benefits from having the former in it’s midst. Grouchy homeowners and worn-down office workers alike can’t help but be cheered by the sight of a golden rocket gleaming warmly over the rooftops, even on cloudy days. 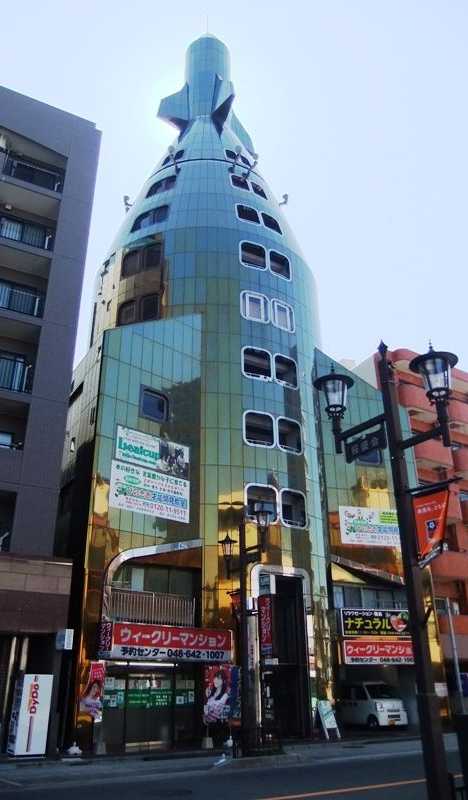 The building’s design is actually quite complex – a pair of scalloped insets on either side of the main entrance allow for open-air balconies with a steel railing facing the street. As well, beneath one of the balconies is an extremely small (though typical for Tokyo) parking space which might possibly hold two small cars or minivans. 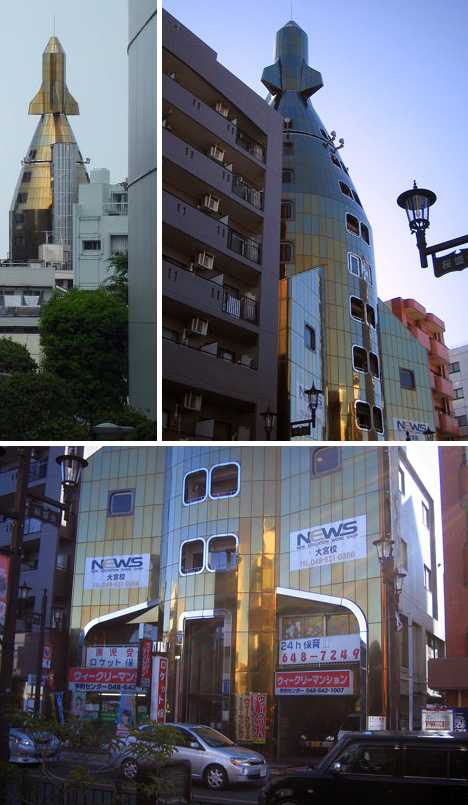 (images via: Diary of Goro and Edo/Kawagoe)

It has been suggested that in the years after the Rocket Building opened, the topmost story housed a small rotating observation deck that provided a very limited number of visitors a unique view over Omiya Station and the nearby neighborhood. Whether due to safety concerns, mechanical issues or the preferences of the building’s current tenants, the miniature rooftop upper stage has been fixed in a static orientation for some time. 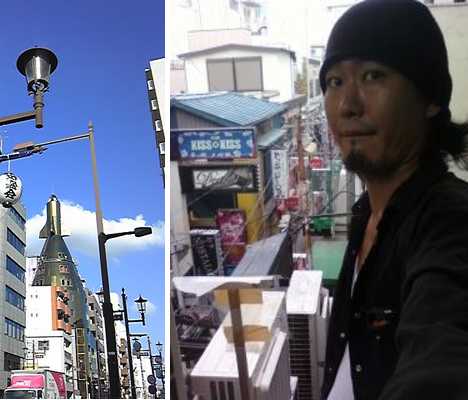 (images via: Relieved Somewhere and Bring Back The Chance)

The Rocket Building isn’t especially tall as urban high-rises go, it just looks that way compared to most of the surrounding homes, shops and mixed-use buildings in West Omiya. The area was already settled and substantially occupied by the time the Rocket Building’s builders applied shovel to soil; this partially explains why the building appears to have been shoe-horned in amongst its neighbors.

(images via: Saitama Diary and Memorandum… So Forgetful)

Being a “big fish in a small pond” helps the Rocket Building retain some notoriety, as if looking like a spaceship ready to launch isn’t enough. The golden mini-missile capping the building often appears in wide-field photos of the area and curious visitors naturally wonder what’s supporting it – how nice that beneath the topmost rocket is a larger rocket one can enter at their leisure! 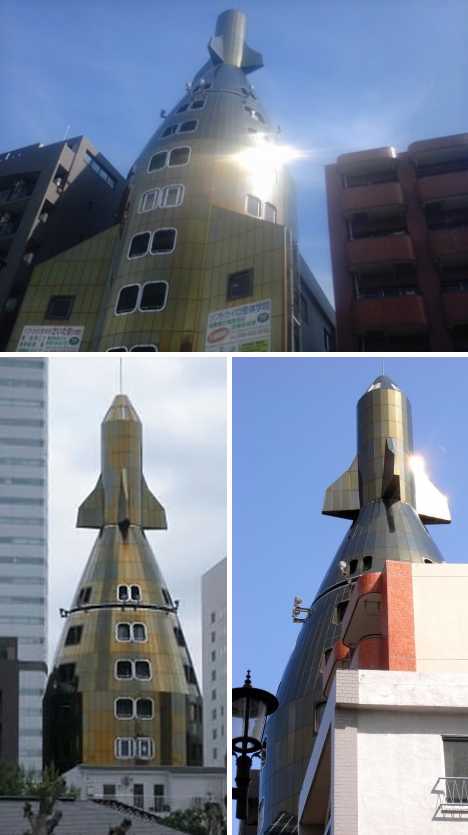 What does the future hold for Omiya’s iconic Rocket Building? The structure is aging and the building’s unique design and décor mean replacement parts and panels are either in short supply or are simply non-existent. West Omiya is changing as well, slowly shedding its traditional working class accoutrements and gradually melding into mainstream Tokyo. 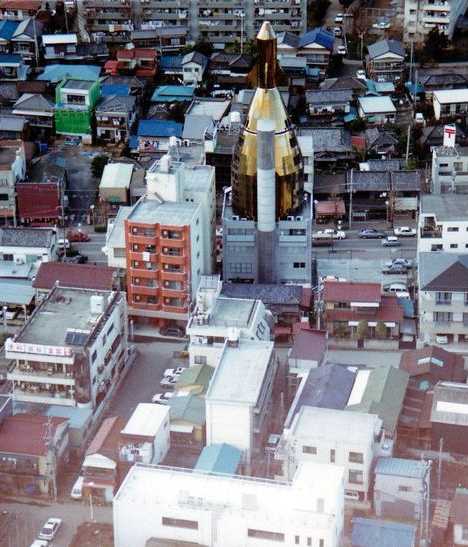 (image via: I Was Walking Thousands Bloom)

Sooner or later, the block or blocks housing the Rocket Building will likely be razed and some massive plaza will rise in its place. For now, though, enjoy the quirky charm of the Rocket Building and appreciate it as a capsule comment, so to speak, of those bright days when building upwards in Tokyo was more than just an expression.