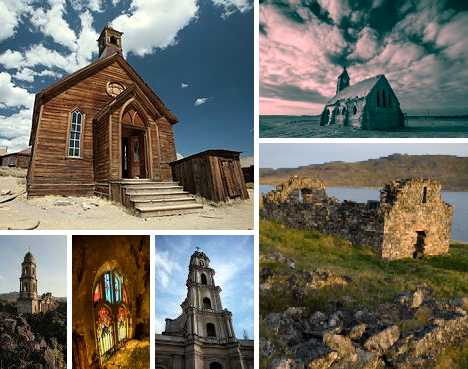 Abandoned churches may symbolize to some the weakening of religion in the modern age but that’s far too simplistic an explanation – people can move, churches not so much. These 7 amazing abandoned churches stand as testaments to the power of faith and the construction skills of motivated craftsmen though their congregations have forsaken them. 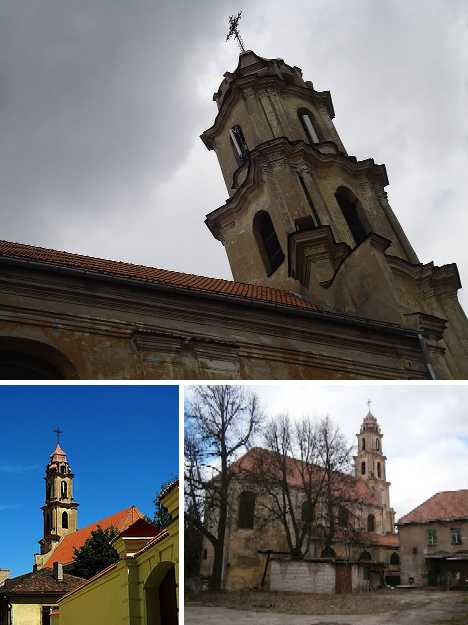 The six-story Church of Blessed Virgin Mary of Consolation in Vilnius, Lithuania, had its heyday long ago when the Polish–Lithuanian Commonwealth was one of Europe’s largest and most populous states. Tough times were in the making for Vilnius, however, and the years 1710 through 1711 when the city lost approximately half its population due to an outbreak of bubonic plague were especially trying. 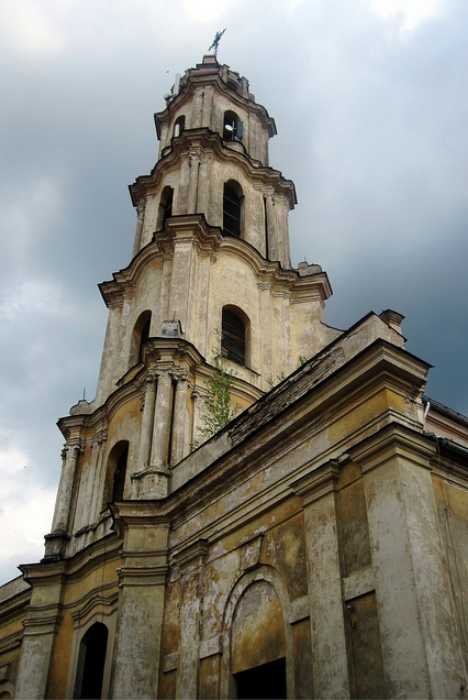 Like most large churches and cathedrals, the Church of Blessed Virgin Mary of Consolation was built to last and last it has, through wars, plagues, communism and more. The appearance of trees and shrubs that have taken root on the roof of the lowest floor indicate that the old gal has at least some life left on her, if not in her. 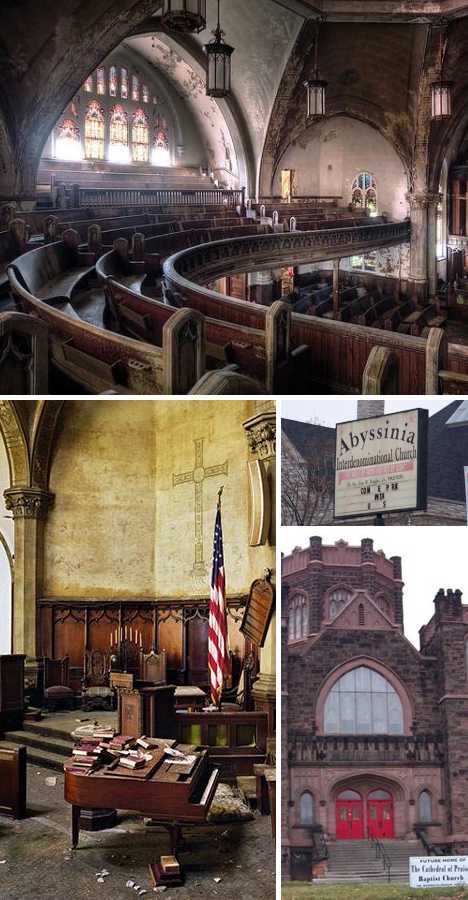 Known as “St. Curvy” by parishioners due to the spectacular sweep of its wooden upper balcony, the Woodward Avenue Presbyterian Church in Detroit, Michigan was dedicated in June of 2011 after nearly three years of construction. The English Gothic-style church’s fortunes rose and fell along with the city of Detroit and only its addition to the National Register of Historic Places in 1982 kept it from the wrecker’s ball. 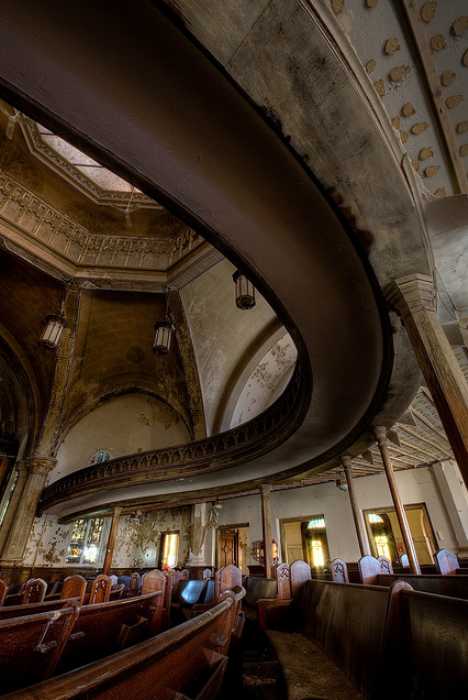 “This splendid building… stands as one of the most handsomest churches in the country,” wrote the Detroit Times on June 10th of 1911. Attendance declined in the mid-1950s and drastically accelerated following the 1967 race riots. After an unsuccessful stint as the Abyssinia Interdenominational Church, the building and its contents were sold to new owners unwilling to pay for its upkeep. A proposal in 2010 to turn the church’s cavernous carcass into a homeless shelter seems not to have gained traction and in the current grim economic climate it’s doubtful “St. Curvy” can hold out against vandals, the elements and time itself much longer. 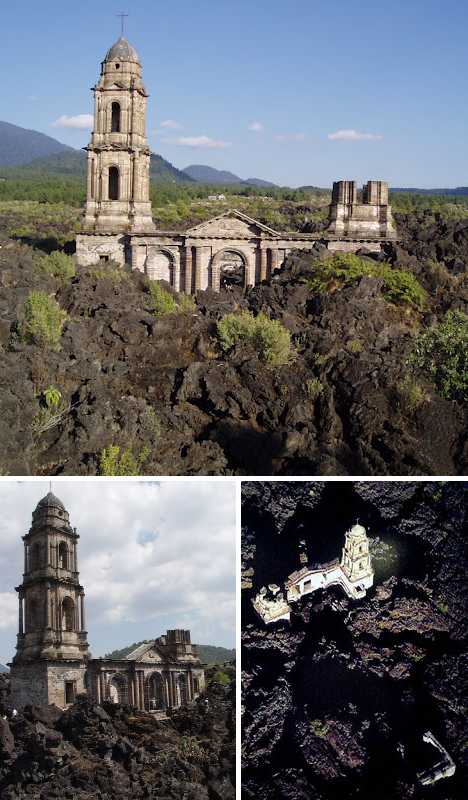 Located in the Mexican state of Michoacán, the remains of the Church of San Juan Parangaricutiro, rise from a still-warm lava field expressed by the Paricutin volcano in 1944. After suddenly erupting from a farmer’s cornfield the previous year, Paricutin expelled waves of molten lava that breached the church’s cemetery walls in 1944 and quickly subsumed most of San Juan Parangaricutiro’s centuries-old cathedral. 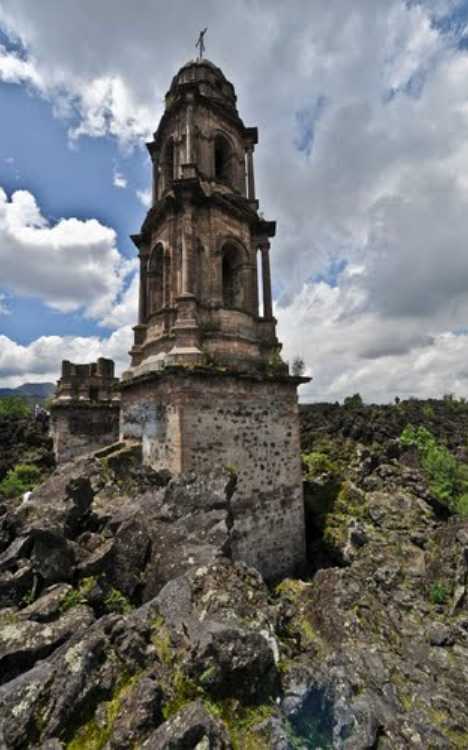 Only one tower, sections of supporting walls and the so-called “Altar de los Milagros” remain visible under solidified lava up to 40 feet thick. The church and alter are popular tourist attractions as it is said the lava’s stopping just short of the alter was a miraculous occurrence. 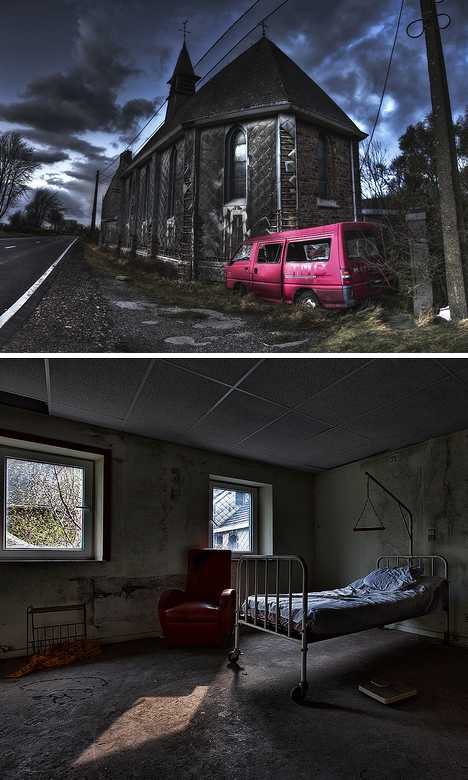 (images via: Bestarns and Jan Hoogendoorn)

Agnus Dei is a combination church and retirement home abandoned in 2005 after a devastating fire. The carnage was mainly restricted to the residential wing, however, leaving the liturgical areas comparatively unscathed. 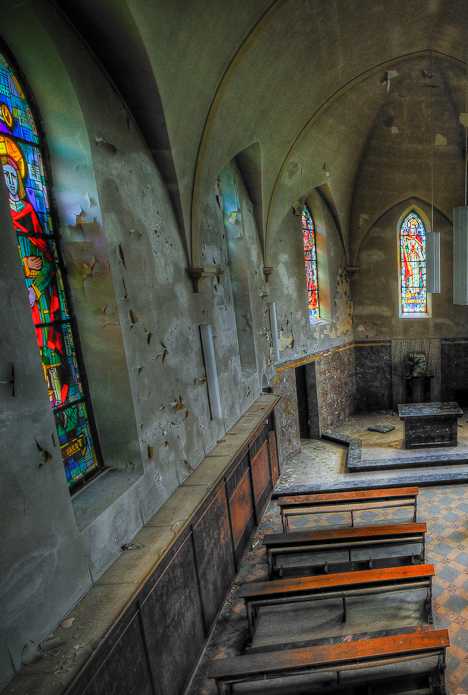 A more severe fire would have resulted in Agnus Dei’s exquisite stained glass windows being blown out, melted or both – they seem to have survived just fine. The relative isolation of the buildings has also helped keep vandals and graffiti “artists” at bay, which is why Agnus Dei’s precise location will remain unmentioned in this post. 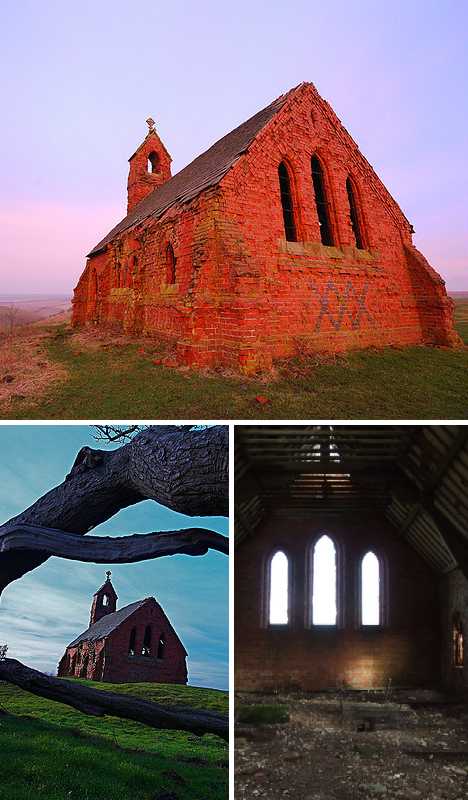 Red brick Cottam Chapel (or Holy Trinity church) dates from 1890 though it looks much older than that. The crumbling structure is all that remains of a village that stood at the site for nearly 1,000 years. Services were held annually at the chapel around harvest time into the 1930s but the building has been unmanned and unmaintained since then. 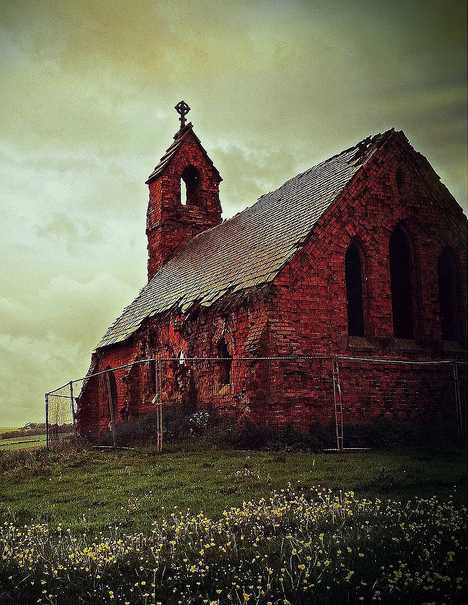 The Cottam Chapel was slated to be demolished in 1990 but through the efforts of Arthur Mason of Cottam House, the Church Commissioners were persuaded to leave the structure in place, as-is. Nowadays the chapel is a popular stop for hikers in Yorkshire and it’s proved to be a boon for photographers after that quintessentially English composition combining the forces of time and the themes of pastoralism. 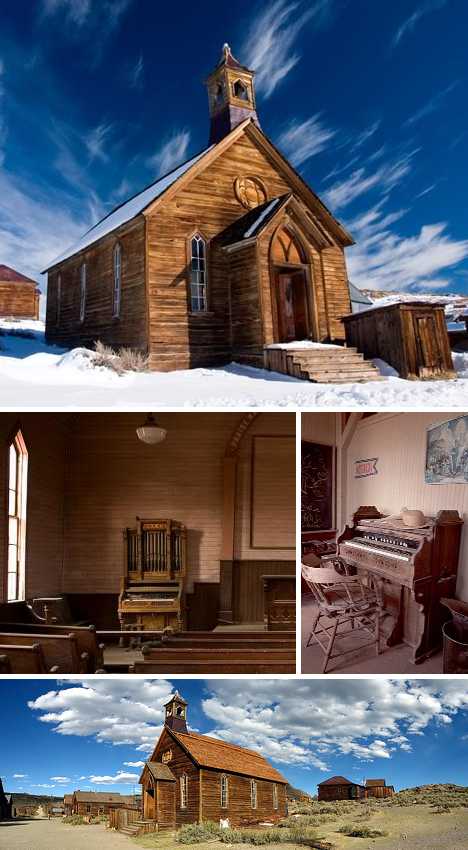 (images via: Not Over The Hill and KYCheng)

Dedicated on September 15th of 1882, the Methodist Church in the boomtown of Bodie was a case of too little too late: the town’s population had suffered a decline of roughly 70% over the previous year as the gold-mining boom was rapidly turning to bust. Like many of the town’s buildings, the church was made from wood which has held up remarkably well in the arid climate 8,379 feet (2,554 m) above sea level at the California-Nevada border. 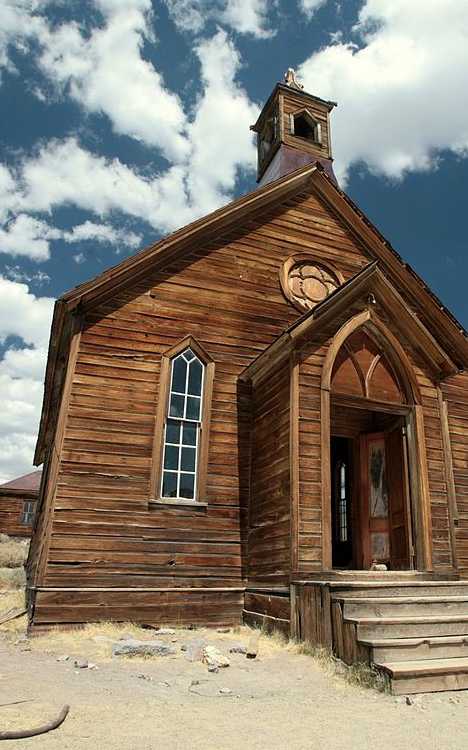 Designated a National Historic Landmark in 1961 and a State Historic Park the following year, Bodie’s small but resilient Methodist Church remains in a state of “arrested decay”. Visitors are not able to enter the building but its door is open, literally, to those interested in how religion in a two-church town was able to coexist with over 60 saloons. 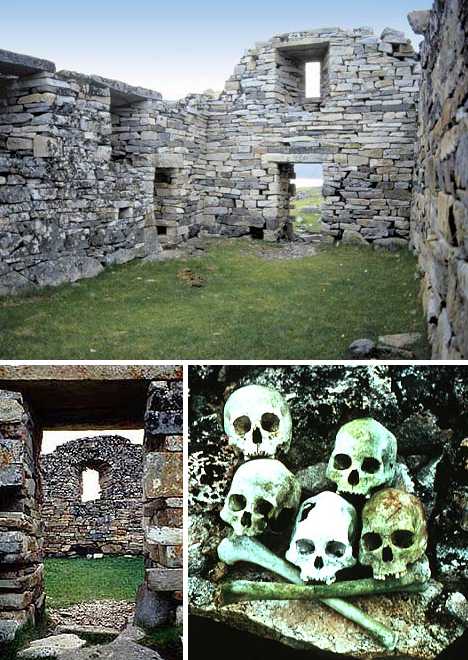 The remnants of the Church of Hvalsey near the modern town of Qaqortoq, Greenland may look a little worse for wear but hey – how would YOU look after standing for 600-odd years in southern Greenland’s not-so-balmy weather? The most recent records concerning the church date from the year 1408 when a wedding was performed there. At that time the church was already over 400 years old, having been built shortly after Norse colonists from Iceland established the Eastern Settlement in the year 985. Skeletal remains of some of the colonists have been recovered from burial places just outside the church walls. 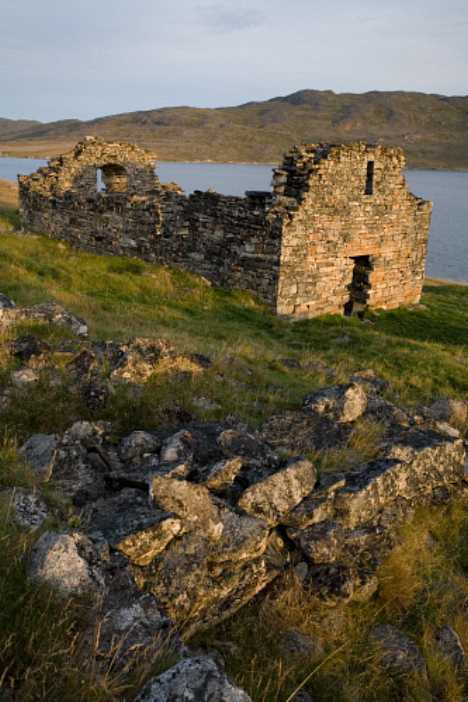 Qaqortoq means “the white place” in the language of the local Inuit people. Archaeologists surmise that the walls of the Church of Hvalsey were originally plastered with mortar made from crushed seashells though the plaster has completely weathered away. The church also featured windows which were small on the outside and large on the inside, a sign of advanced construction techniques employed by the “rough” Vikings. 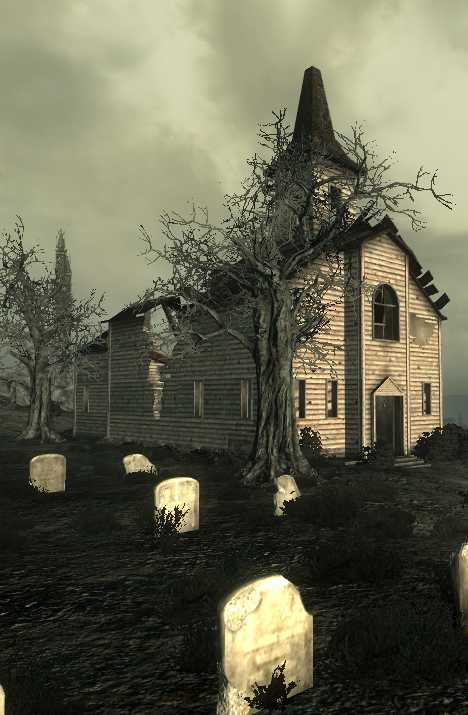 Call ’em creepy, spooky or just plain possessed but abandoned churches just seem to exude a certain vibe whether one is personally religious or not. Fictional representations such as the snap from Fallout 3 (above) can merely match the unsettling atmosphere of these monuments to monotheism; adding a neglected graveyard doesn’t hurt either. Take the time to visit an abandoned church sometime in your travels… you won’t be the first but you just might be the last!