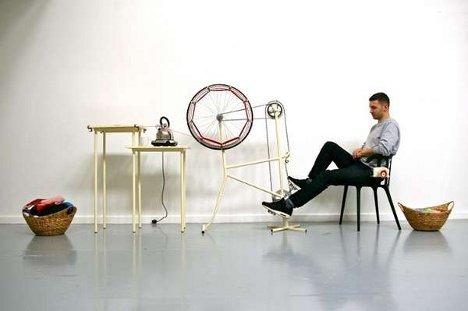 For any knitter who has ever looked at an ugly sweater and thought wistfully of all of the projects they could complete with that wasted yarn, the Un-Knitting Machine is a gift from the crafting gods. It was developed by Kingston University design student Imogen Hedges and is meant to salvage miles and miles of perfectly usable yarn. 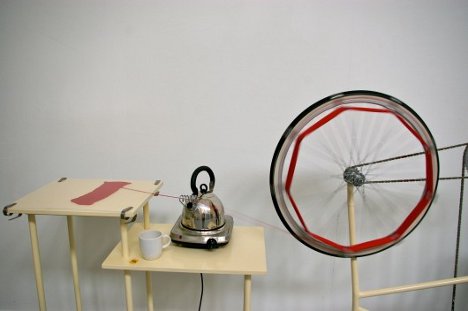 According to the designer, her inspiration for the project was twofold. As a child, her grandmother knitted sweaters for her; when she had outgrown them, her mother simply threw them away because she didn’t believe anyone would want a secondhand hand-made sweater. More recently, Imogen discovered that many charity shops spend hours and hours unraveling old sweaters to reclaim the yarn. With this revelation, the designer conceived of a machine to make the process of recycling yarn far simpler.

The rather minimal machine utilizes an old bicycle frame to spin old yarn out of its previous incarnation and into a re-sellable, reusable heap of material. The user sits on a chair and pedals, spinning the bike wheel and causing the yarn to spool on the side of said wheel. As the yarn is pulled from the old project, it passes through the steam of a kettle which helps to straighten out the kinks and get it ready for a brand new life as something else entirely.