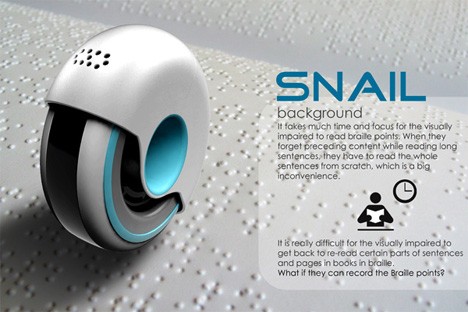 For people who lost their vision after learning to read, re-learning to read in braille can be a huge challenge. The Snail from designer Wonkook Lee is an easy-to-use little device that lets you read braille just by rolling it across the lines of text. 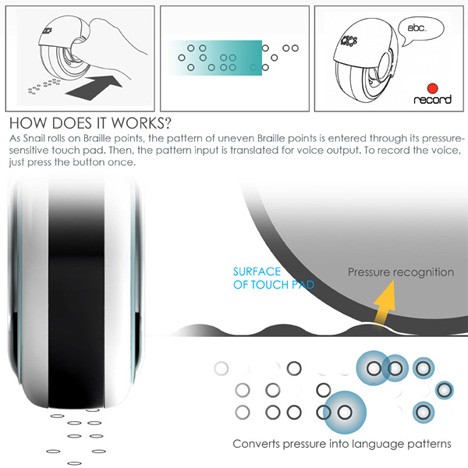 The pressure-recognizing surface of the wheel senses the positions of the braille bumps on the page and translates them into audio. The Snail is equipped with a speaker that reads the text aloud, though there is also an option to pair it with a Bluetooth earpiece so bystanders don’t overhear every word. 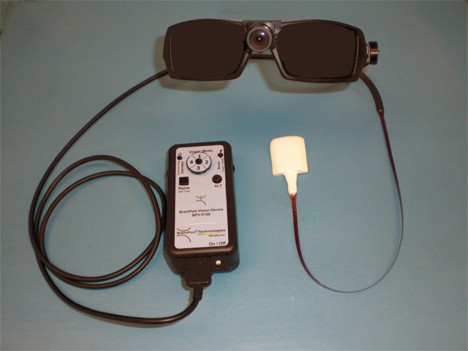 The rather amazing BrainPort device from Wisconsin company Wicab would use one sense to stand in for another. The system consists of a pair of sunglasses with an embedded camera, a control box, and a paddle covered in electrodes which sits on the user’s tongue.

The camera transfers visual information to the electrodes on the tongue paddle. These tiny, painless electric impulses stimulate the tongue in such a way that the user can actually see the image in front of him or her. Sound weird? It kind of is, because even the people who made it can’t be 100% sure how it works. The mechanism that allows completely blind people to see their surroundings through tongue impulses is a bit of a mystery.

Unlike a lot of other visual assistive devices, this one requires no invasive surgery and has a very small learning curve. First-time users are able to master the BrainPort in less than a day – some in as little as just a couple of hours. The device is still under development, but of all of the devices listed here it seems to be closest to becoming a real product. 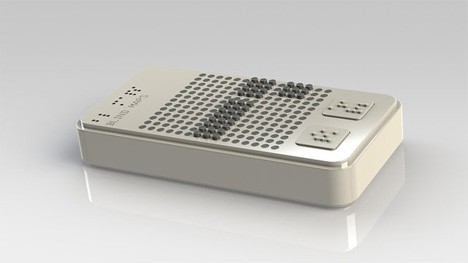 A team of students at the Copenhagen International Institute of Design came up with a smart concept to help visually impaired people find their way around new cities. Their Blind Maps concept involves an iPhone and a small module that connects to the phone physically or over Bluetooth.

The plug-in module is a little box with metal pins that raise and lower to give directions. Users speak a destination into the phone’s microphone and an app interacts with the tactile module to raise certain pins. The user keeps a hand on the module while walking and the device guides them there, just like looking at a map.

The Sound Equals the Vision 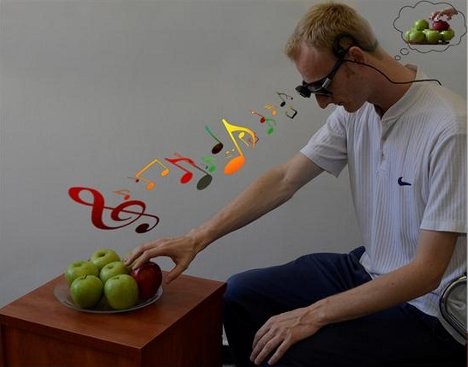 A very intriguing – and musical – concept comes from a group of researchers at the Hebrew University of Jerusalem. The EyeMusic system subs “soundscapes” for sights – in other words, when you point the sunglasses-mounted camera at an object or scene, the attached bone conduction headphones relay that information in sound form.

Certain colors correspond to certain instruments, and the pitch of the sound relates to location on the X and Y axes, and amplitude indicates brighter colors. This all sounds frightfully confusing, but in trials the researchers found that blindfolded subjects caught on to the functionality very quickly.