A “universally despised” postmodern public square in Los Angeles is getting a second look this week with the addition of a surreal glittering silver cloud that undulates in the air above the concrete, seemingly floating without any supports. Tethered from a 10-story purple bell tower to a lower corner of the park, the latticework installation is made of thousands of holographic mylar strips that flutter in the breeze. The work is a collaboration between patrick Shearn of Poetic Kinetics and the AA Visiting School of Los Angeles, a week-long design program for art students.

What an amazing sight in Pershing Square!!

Due for a makeover in 2019 that will replace much of the concrete with grass and create shade canopies, Pershing Square tends to be empty and quiet despite renewed vitality in other areas of downtown L.A. It’s one of the city’s oldest public spaces, but had its trees and grass ripped out in 1951 so a parking garage could be installed beneath it. 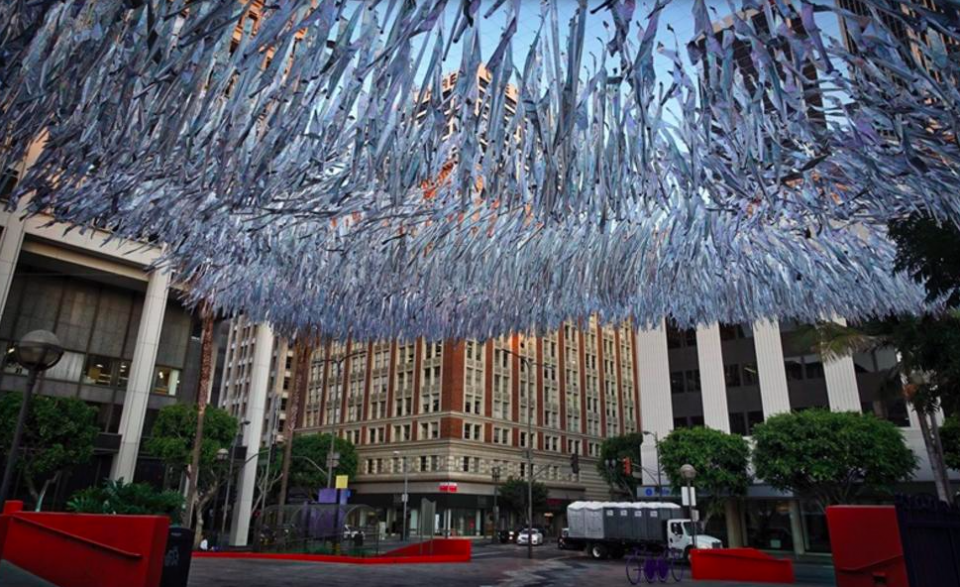 ??????? MAGICAL!!! ‘Liquid Shard’ installation by @aavsla @poetickinetics Thank you for bringing such a beautiful piece into Downtown! ?? #liquidshard

Poetic Kinetics is known for creating many of the massive, colorful creations that appear at Burning Man each year. Sharon says he was inspired by nature and “the feeling that we are only aware on a very surface level of what is really going on around us. We feel the currents of air on our skin but do not see the larger movements.”

Find yourself beneath a new installation, “Liquid Shard” by @aavsla and @poetickinetics, up and flowing now at Pershing Square. (?: @coleoptera.bijoux) #dtla #historiccore

The Los Angeles Times captured 360-degree views of the installation, which billows like a school of fish when it catches the wind just right. Measuring 15,000 square feet, ‘Liquid Shard’ will remain in place through August 11th, so stop by and experience it in person if you can.