Designed to address the pervasive drought and long-term water problems of the West Coast, The Pipe is an offshore water purification plant that combines sustainable energy, public works and experiential architecture.

A finalist of the 2016 Land Art Generator Initiative design competition, focused on projects around the Santa Monica Pier, the solar-powered Pipe filters brine and channels drinking water to the adjacent city. Saltwater is returned to the Pacific Ocean. Khalini Engineers, a Canadian company, employed an electromagnetic desalination system for their entry, driven by energy from the sun (10,00 MWh/year). With that power and overall system capacity, the Pipe could produce 1.5 billion gallons of fresh potable water annually. 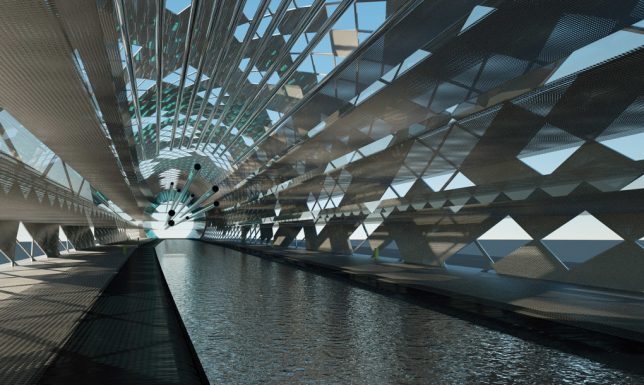 “The sustainable infrastructure that is required to meet California’s development goals and growing population will have a profound influence on the landscape, ” say Rob Ferry and Elizabeth Monoian, co-founders of the Land Art Generator Initiative. “The Paris Climate Accord from COP 21 has united the world around a goal … which will require a massive investment in clean energy infrastructure.”

“Above, solar panels provide power to pump seawater through an electromagnetic filtration process below the pool deck,” writes the design team, “quietly providing the salt bath with its healing water and the city with clean drinking water. The Pipe represents a change in the future of water.” 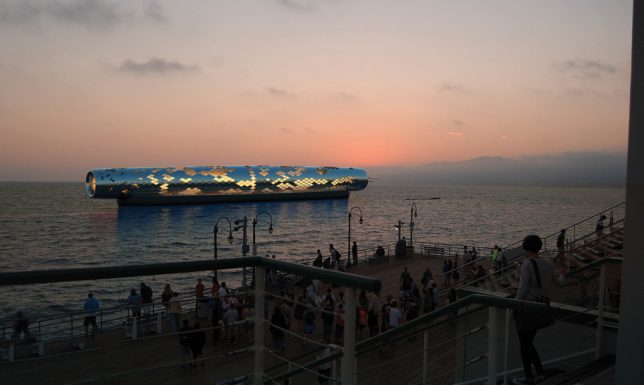 “What results are two products: pure drinkable water that is directed into the city’s primary water piping grid, and clear water with twelve percent salinity. The drinking water is piped to shore, while the salt water supplies the thermal baths before it is redirected back to the ocean through a smart release system, mitigating most of the usual problems associated with returning brine water to the sea.” In addition to its primary functions, The Pipe also represents an aesthetically pleasing offshore object that would change viewer’s conceptions of near-coastal rigs, conventionally associated with oil production.