A pane of glass overlaid with a simple line drawing brings crumbling ruins to life at one of Austria’s most famous historical sites, reanimating the partial building near the Open Air Museum Petronell. When a viewer lines up the illustration with the structure, known as Heidentor (Heathen’s Gate), the image completes itself in a compelling yet entirely low-tech fashion.

Located just east of Vienna, Carnuntum dates back to the the 1st Century A.D., when Roman soldiers expanded on an existing town 50,000 people to create a military encampment. Between 354 AD and 361 AD a huge triumphal monument was erected next to the camp and city. Contemporary reports suggest that Emperor Constantius II had it built to commemorate his victories. 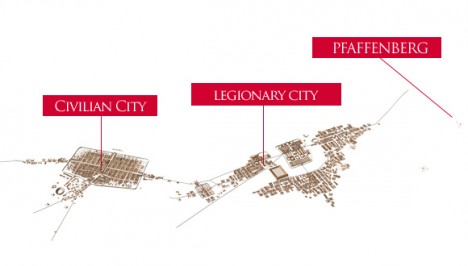 “When the remains of Carnuntum disappeared after the Migration Period the monument remained as an isolated building in a natural landscape and led Medieval people to believe it was the tomb of a pagan giant. Hence, they called it Heidentor.” 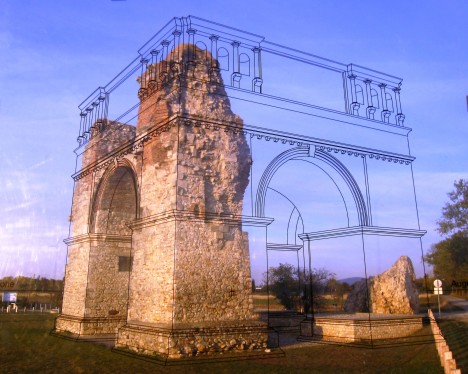 Preserving ancient historical sites is often a balance between stabilization and restoration; fully restoring can enhance the exterior appearance, but is costly and arguably diminishes the authenticity of a ruin. This approach strikes a balance, much like augmented overlays in digital history apps.