These days, “user experience” tends to refer more to the digital realm than our physical environment, but it’s no less relevant to roads and sidewalks than to websites and software. When creating something that people will interact with, no matter what it is, the goals are often the same: it should be useful, usable, accessible, findable, desirable and valuable (add “credible” when it comes to information). It gives you what you need, when you need it, in precisely the right form.

But in the process of designing something one hopes will be beautiful, sometimes user experience falls by the wayside. So-called “desire paths” are one example of what can happen as a result. Formed when people forge a path across unpaved land, regardless of any nearby walkways that may already exist, these paths are an organic and often unconscious form of urban hacking, when users decide what works best for them in the environments they occupy every day. 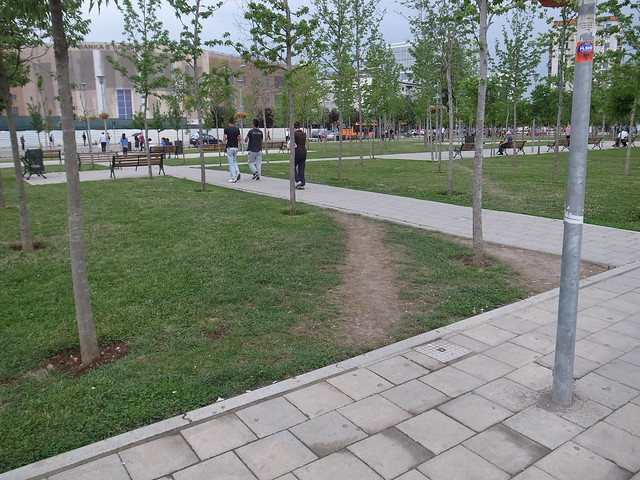 Who would’ve guessed from r/DesirePath

People made a desire pentagram inside a big roundabout. from r/DesirePath

Desire paths are almost like a litmus test for built environments; when they appear, they’re signaling that somewhere along the way, someone likely failed to determine what the design was supposed to do, and for whom. At its root, urban planning is a tool of social control, attempting to impose order upon the wild and intuitive, with a goal of producing an efficient system that’s easy to manage. Of course, it’s essential to maintaining the complexity of modern cities, and the grids and patterns that form the basis of most cities have their purposes, like streamlining traffic and navigation.

That may be fine when you’re driving, but walking is a different story. Most of us want efficiency when we’re walking, too, and that means cutting out unnecessary corners and curves along the way. Enormous pedestrian roundabouts might fit neatly within traffic circles and look nice from above, but when you’re just trying to get from point A to point B, spending the extra minutes it takes to keep to the concrete circle rather than cutting through the grass feels like a waste. 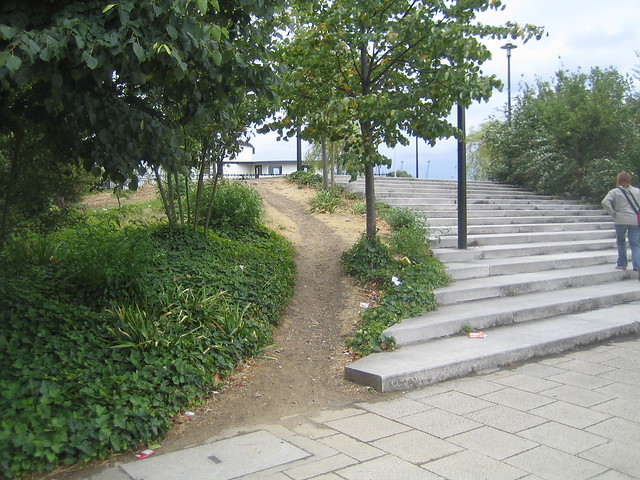 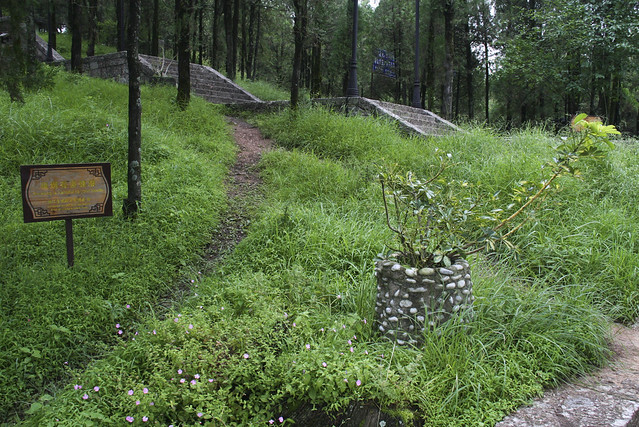 Illicit trails reveal a lot about a given place, the people who populate it, what their needs are and whether those needs are being met. That’s especially true when it comes to accessibility. Over time, it can become abundantly clear that ramps should be built for people who can’t navigate staircases (as it should have been from the very beginning).

Once you start looking for them, you’ll spot desire paths everywhere; there’s even a fascinating and enthusiastic subreddit devoted to them. They can change according to the weather, appearing when sidewalks get icy; snow can sometimes reveal invisible common paths taken to cut across hard surfaces like asphalt.

View from my dormitory, huge one with a fork at the end from r/DesirePath

Desire paths don’t always result from a design failure. Sometimes they just reflect the fact that people want to walk, run or bike on a natural surface instead of following pavement. Sometimes they illustrate the need for cities to be more adaptive; a system of sidewalks that worked twenty years ago stops serving its users when new popular destinations pop up in different spots along the way. And sometimes, when walkways are attempting to protect sensitive natural habitats, user-determined paths can be legitimately harmful.

A local college is trying to thwart this desire path by planting a tree in the middle of it. from r/DesirePath

My University giving into the desire path from r/DesirePath 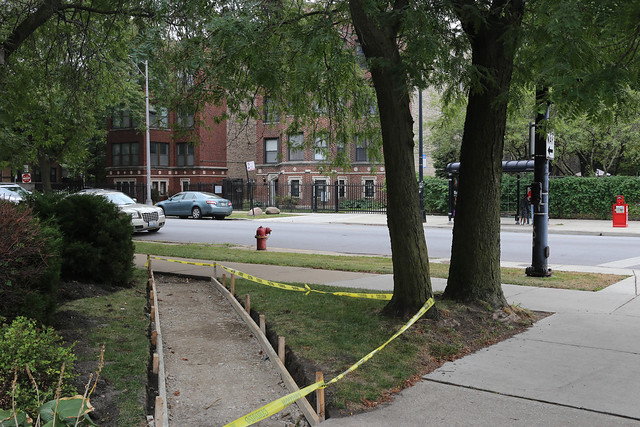 Those in charge of determining the location and layout of official pedestrian paths may try to fight user-created routes with obstacles, but it’s a fool’s errand, much like trying to hold back the ocean. The paths will simply multiply. Rebellious in spirit, desire paths are a physical manifestation of the untamed parts of us that defy control by external systems. Sometimes there’s nothing for urban planners to do but accept the wisdom of the people who actually use the paths, and make them official.

Top image by wetwebwork/Flickr CC by 2.0