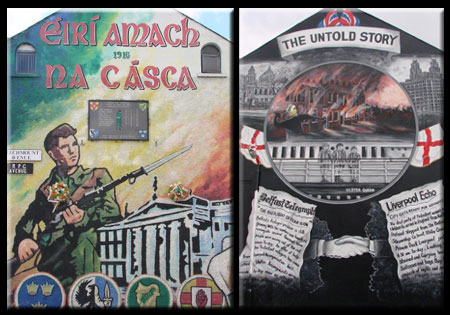 Belfast, the capital city of Northern Ireland, has been home to some of the worst violence Ireland has endured. The Troubles, between the late 1960’s and 1998, divided the nation, mainly between Nationalist Catholics and Unionist Protestants. The Agreement on Good Friday (April 10th, 1998) brought an end to 30 years of suffering and bitter feuding between these communities. Throughout The Troubles both sides painted large murals on buildings, particularly in residential areas on houses at the end of terraced rows:

Many of these murals glorify paramilitary groups such as the Irish Republican Army (IRA) or the Ulster Volunteer Force (UVF). The murals of Belfast have acted as beacons to people, declaring allegiances from one area to the next:

Murals of Belfast have in the past and still do create a sense belonging and identity for residents. However, not all such murals were designed to incite hatred or divide communities. Some show a more Celtic flair and inject colour into less established areas:

Murals concerning the political polices of the USA and the war in Israel have been popular as well, because many Belfast residents feel they can relate to the violence in other countries:

As Belfast emerges from a decade of peace brought on by the Good Friday Agreement, things have begun to change. Murals promoting a political or religious belief within Northern Ireland are being painted over and replaced by neutral colors or advertising for local businesses: 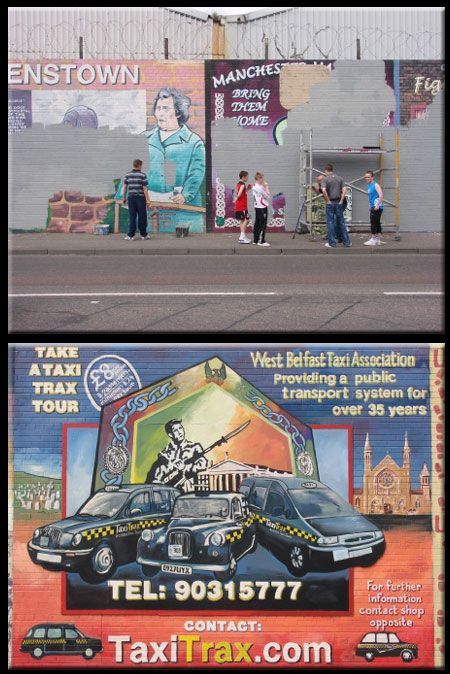 Iconic soccer figures such as George Best and Samuel English now grace some of the walls too. Belfast residents now prefer looking up to a different kind of hero than the paramilitary fighters of the past. A new generation is emerging, growing up in less dangerous times: 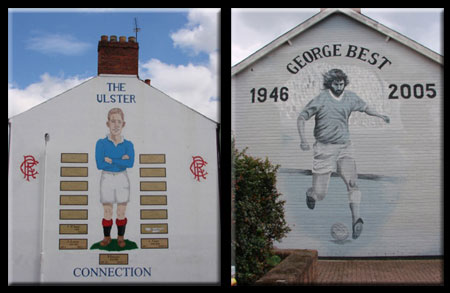 It is fair to say the murals of Belfast are as diverse as they are artistic, made with dedication and skill by people of different communities and differing opinions, each wanting to make their voice heard.

They are a way for people to make known who they are.

A way of belonging.

Liam Moore is an Interactive Multimedia and Design student at the University of Ulster. He currently enjoys taking photos, listening to lots of music, watching films and is interested in all kinds of art and design. The images above were photographed by Liam with a Sony Cybershot DSC H5. Visit Liam’s blog to see more original photography and design work.

Enjoy this post? Feed, fave and bookmark the site! Interested in having your work published on Web Urbanist? See our guidelines for how to submit ideas, images or full articles.