As the world increasingly focuses on sustainable initiatives, green architecture is a booming industry. Everything from single-family residences to giant 1.2-million-square-foot complexes complete with giant skyscrapers is getting the green treatment, and the innovation that iss going into these plans is more complex than ever. From spinning towers to seawater greenhouses, ome of these structures will debut as early as the fall of 2008 while others present a view of what 100 years from now may hold, but all represent amazing leaps in green technology that push the boundaries of what we’ve ever thought possible. (Then see more here: Green Art, Design and Technology). 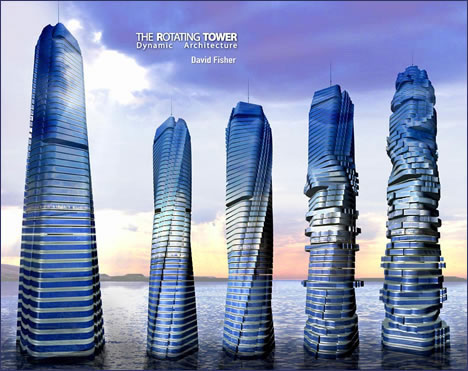 Architect David Fisher has proposed a plan for rotating towers that produce all of their own energy through wind power. The Rotating Tower would be built by stacking platters on a central concrete core with wind turbines located between each of them. Each floor will rotate 360 degrees about once every 90 minutes; as the floors will rotate independently, they will create a constantly changing silhouette in the sky. Inside the concrete core will be elevators, emergency stairs and lobbies. The Rotating Tower will be built in Dubai in the next six months. 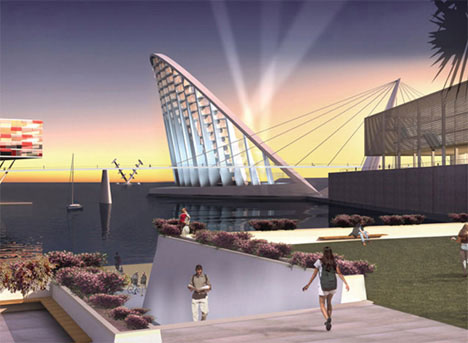 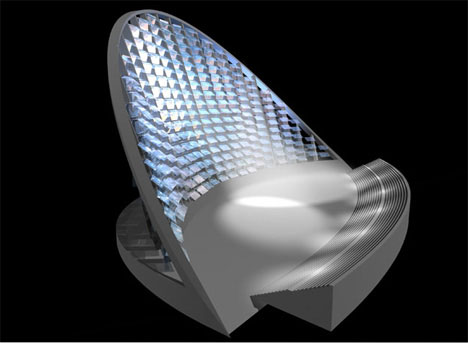 As water becomes an even hotter commodity in the future, engineers are looking for ways to ensure a continued supply of fresh water to meet the needs of the world’s growing population. Charles Patton is tackling this problem with his Seawater Greenhouse, a carbon-neutral desalination method which is being incorporated into the design of the Teatro del Agua. This Theater of Water will be a performing arts center in Spain’s Canary Islands. It works by coupling a series of evaporators and condensers such that the airborne moisture from the evaporators is then collected from the condensers, which are cooled by deep seawater.? The center will operate almost entirely on renewable energy. 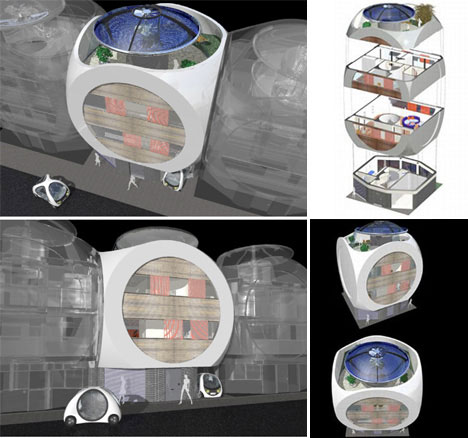 The Dice House is a zero carbon home, which can either stand alone or function as attached multiple dwellings. Designed by Sybarite, a British architecture firm, the Dice House is a 9 x 9 meter cube that sits on an octagonal plinth. Three levels inside the cube have large, plentiful windows to maximize views. A large thermoplastic umbrella on the garden roof of the house shades and insulates the house and collects solar energy. 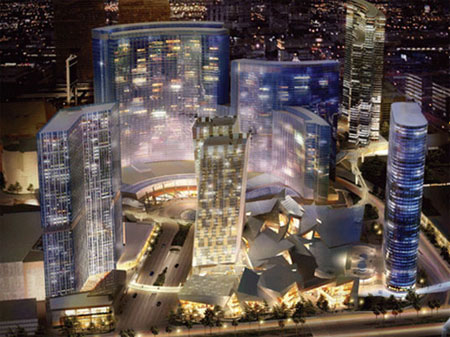 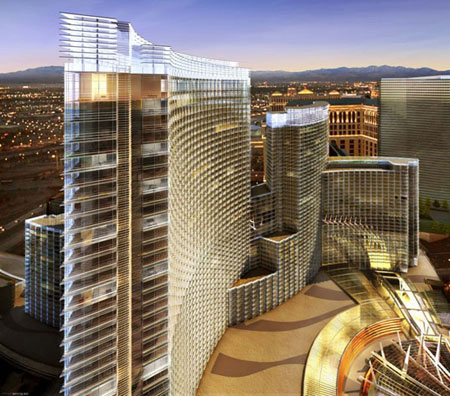 The new Las Vegas CityCenter is the largest privately financed development in North America. This $8 billion project is a joint venture between MGM Mirage and Dubai World. Designing the CityCenter will be renowned green architects including Pelli Clarke Pelli, Foster + Partners and Rafael Vinoly. MGM Mirage has trained over 10,000 construction tradesmen on green building practices to be put into place in the structures. CityCenter, which will house hotels, casinos, restaurants, retail space, entertainment space and a $40M public fine arts center, is touted by its developers as a model of sustainability. Recycling construction waste, using environmentally friendly materials, emphasizing natural light and incorporating an onsite co-generation power plant are just a few of the sustainability initiatives that will be put into place. 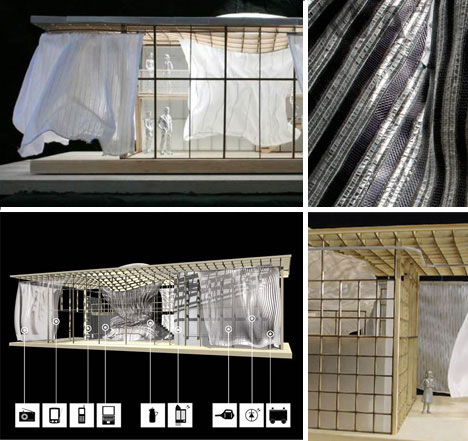 Architect Sheila Kennedy has designed the Soft House, a structure that harvests energy through solar-energy-collecting textiles hung in the home like curtains. These thin-film photovoltaic textiles can create close to 16,000 watt-hours of electricity, providing about half of the home’s power. Though the high cost of this solar technology makes the Soft House unlikely to become reality any time soon, Kennedy hopes that the design will show others that renewable energy technologies can be incorporated into structures in creative and unexpected ways. 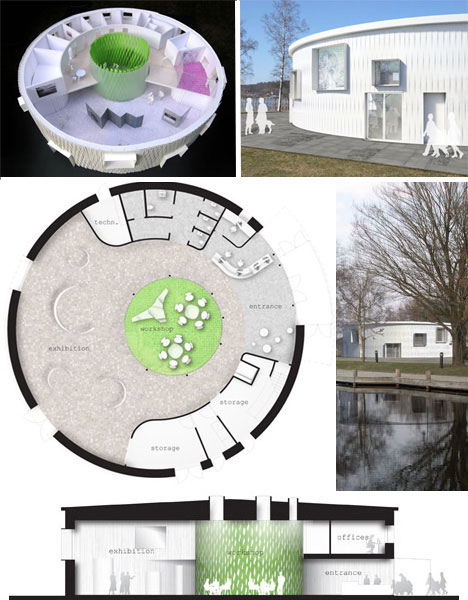 The world’s first passive house museum is set to be built in Ulricehamn, Sweden, functioning as a visitor’s center. The building’s heat will be supplied entirely by the body heat of visitors and the equipment located inside. Solar cells on the roof will provide part of the energy used to run electrical equipment and heat water. The circular design of the structure will allow efficient circulation of air to enhance the passive heating and cooling of the building. 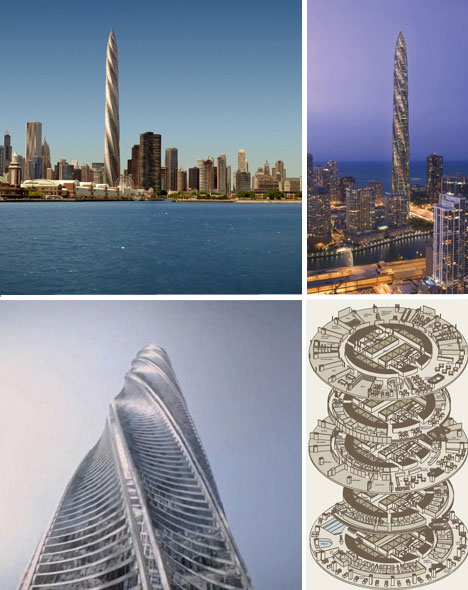 The Chicago Spire is an ambitious project currently under construction in the Windy City. At 2,000 feet, the spire will be North America’s tallest free-standing structure and the tallest all-residential building in the world. Designed by Spanish architect Santiago Calatrava and managed by the Shelbourne Development Group, the Chicago Spire was designed to mimic the natural form of a nautilus shell. The structure is anticipated to have a LEED gold rating; it will be outfitted with rainwater harvesting systems, geothermal cooling and high performance glass designed to protect migratory birds. The Chicago Spire is set to be completed in 2011. 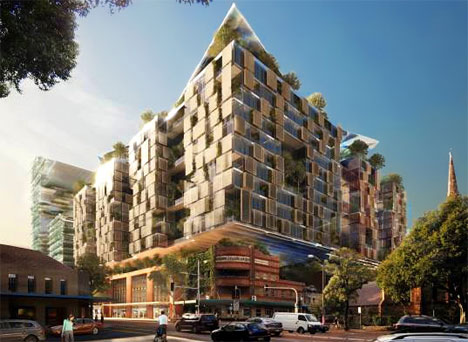 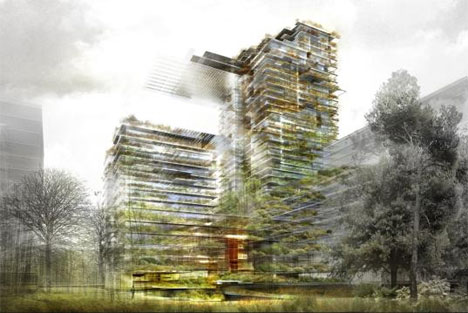 Frasers Broadway, a commercial, residential and retail complex, will be Australia’s most sustainable building. The designers, including Pritzker Prize winners Foster & Partners and Ateliers Jean Nouvel, will incorporate such eco-friendly features as a gas-powered co-generation electricity plant, green rooftops, a wastewater recycling plant, smart metering and solar power into the design in an attempt to achieve carbon neutrality. The 250,000 square meter development will be located in the old Kent Brewery in Sydney. 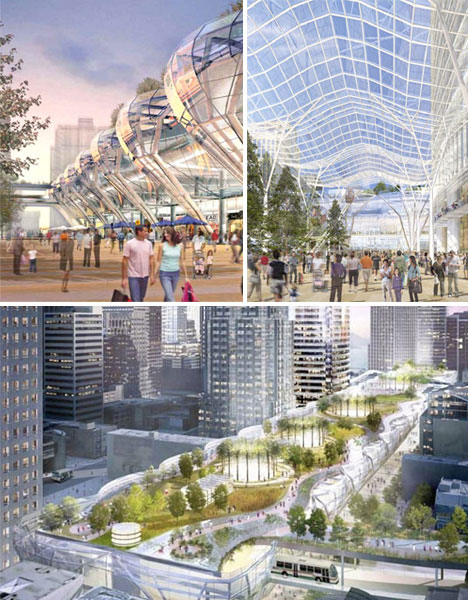 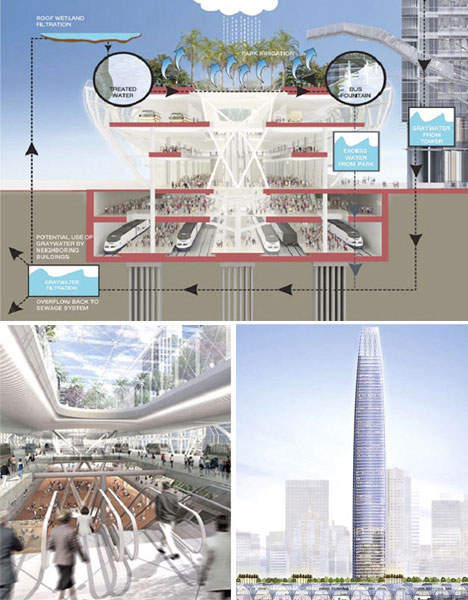 Pelli Clark Pelli architects recently got approval for their design for a new green Transbay Transit Center in San Francisco. The transit center will consist of a glass tower and a five-and-a-half acre public park, and will be packed with sustainable features like green roofs, passive solar shading, wind turbines, a rain and graywater recycling system and geothermal heating and cooling. The aim of the building is to centralize the region’s transportation system while also providing a community space. The center will be completed by 2014. 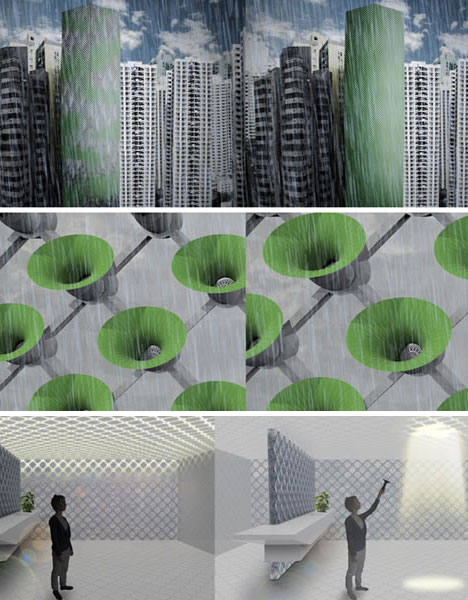 China’s population is exploding while its industrial ventures are producing more pollution than ever – a combination that makes it difficult to be eco-friendly. A new sustainable housing project called Habitat 2020 aims to be one of the leaders in bringing environmental initiatives to this growing country. The Habitat 2020 building will feature an active skin: a membrane between the exterior and interior walls that will absorb air, water and light from outside and dispatch it inside as clean filtered water, natural air conditioning and electricity. The same funnels on the membrane that pull these resources in will also emit clean, CO2-free air from inside the building. This urban megalopolis is set to be complete in 2020. 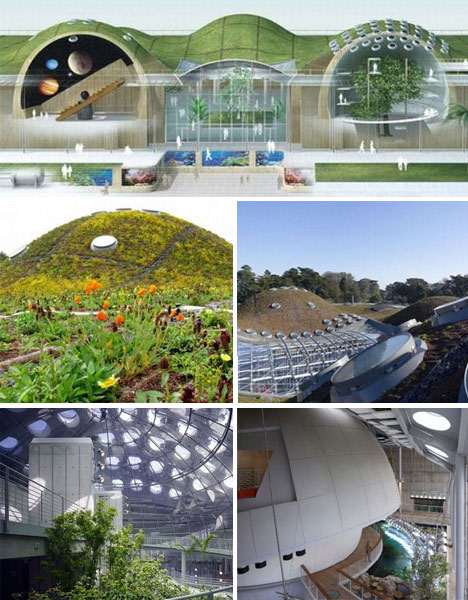 Another project that aims to act as a ‘living’ structure is the California Academy of Sciences museum set to open in San Francisco this fall. The museum will have a 2.5 acre, undulating green roof that will integrate it into the surrounding Golden Gate Park. The 400,000-square-foot, $484 million structure will likely be the first public building to achieve a platinum LEED rating. Designer Renzo Piano has incorporated a planetarium, a rainforest with free-flying birds, a coral reef home to 4,000 fish in a saltwater aquarium and a natural history museum into the building. 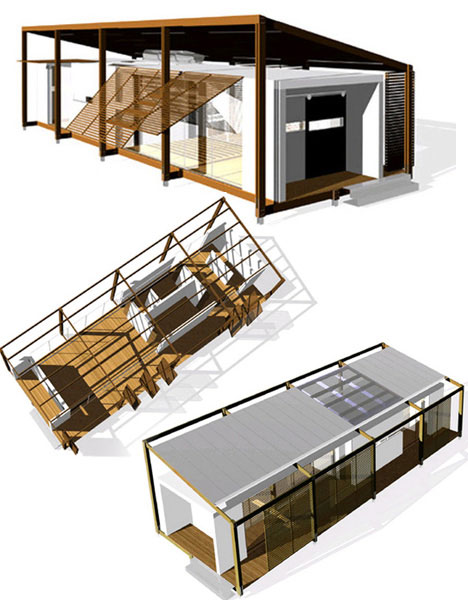 Maul Dwellings designed the Landscape House, which won the AIA’s 2006 Committee on Design competition to design “a house for an ecologist”. The house not only features a double roof for enhanced air circulation, louvered shutters to harvest energy, a Water Pod to house efficient plumbing systems and a solar dehumidifier unit to capture moisture from the air for drinking water, it also is designed for deconstruction and reuse. Though this innovative structure wasn’t originally intended for widespread residential use, its intelligent eco-friendly features make it a great source of inspiration for future green homes. 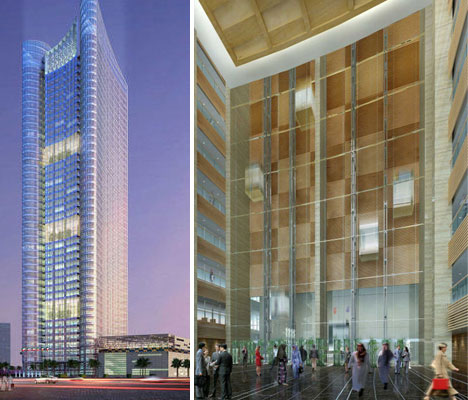 Kuwait will soon have its first LEED skyscraper. The Sabah Al Ahmed International Finance Center will be a 1.2 million square foot, 40-story tower that includes four stacked courtyard atriums ranging from 8 to 13 stories each. The tower will generate some of its own energy from a photovoltaic system as well as the wind turbines that will crown the roof. Inside will be office space and a 4-star business class hotel. The International Finance Center (ICF) has been precertified at the gold level under the LEED rating system. 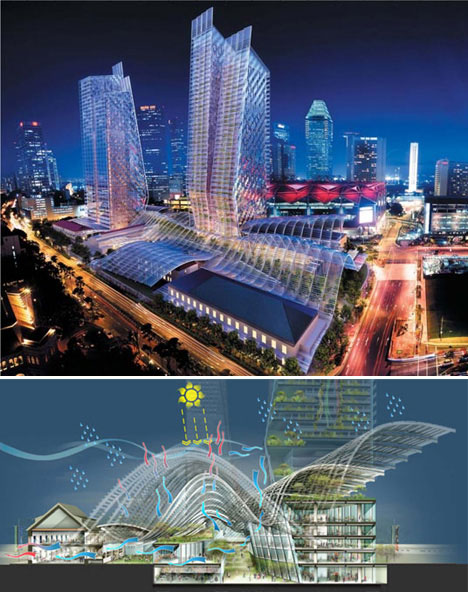 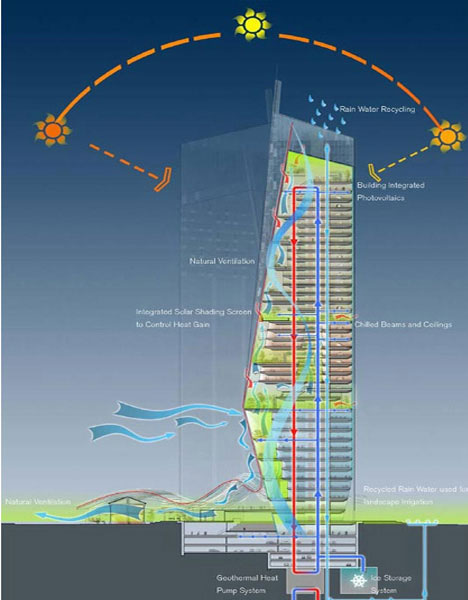 London-based Foster + Partners, who are also working on the aforementioned Frasers Broadway complex, have another green complex in store. This one will be located in Singapore City, measuring 150,000 square meters and set for multi-use functioning. The complex’s exterior will be covered with solar cells, and direct sunlight will also be harvested by tall ribbon-like canopies rising into the skyline. The slanted design of the facades will allow wind to flow into the building for a natural cooling effect, and vertical green spaces will provide ambient temperature moderation. The building will also be equipped with a rainwater harvesting system, geothermal heating, chilled beams and an ice storage system for cooling. 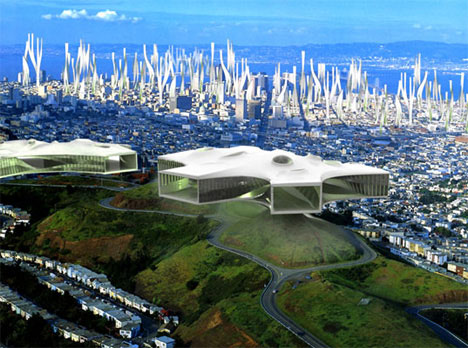 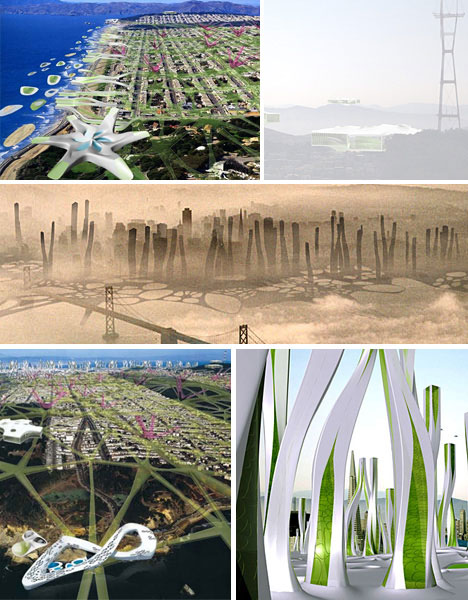 The furthest-reaching green wonder of the future is IwamotoScott Architect’s vision of San Francisco in 2108. This stunning winner of the History Channel’s City of the Future competition shows what a totally eco-conscious San Francisco could look like 100 years from now, complete with algae-harvesting towers, geothermal energy mushrooms and fog catchers to distill fresh water from the city’s foggy atmosphere. Designed to make the most of the area’s microclimate and geology, Hydro-Net is a network of both above-ground and underground systems that takes the need for alternative energy sources in mind with a connected network of water, power collection and distribution systems. Carbon nanotube walls would collect and disperse hydrogen produced by algae, which would be used to hover-cars in underground tunnels.