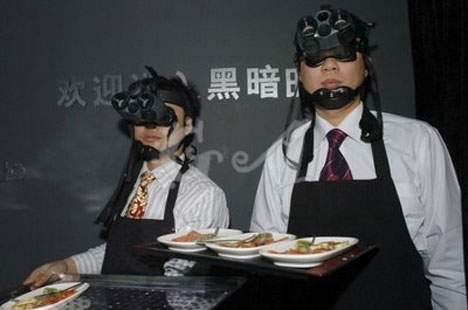 If there’s one thing that all of these restaurants have in common with incredible theme hotels it is the belief that dining doesn’t have to be mundane. From the comical to the sincerely disturbing, strangely themed restaurants have popped up all over the globe, but are most commonly found in Tokyo, Japan. Here are 15 of the weirdest and wackiest themed restaurants in the world, highlighting such gastronomic delights as edible ‘dead bodies’, ‘Spicy Condom Salad’ and feces-shaped ice cream served in miniature toilet bowls. Check out our complete collection of 70+ Amazing Theme, Castle, Jail and Art Hotels 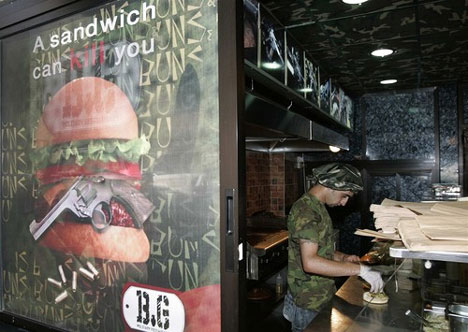 At Buns & Guns in Beirut, Lebanon, everything is military themed – from the décor and names of the menu items to the helicopter sounds that play constantly in the background. Manager Yussef Ibrahim says that the theme reflects the mood of the city during Lebanon’s 2006 war with Israel, and that while some patrons may find it disturbing, most are amused. You can order yourself an M16 Carbine meat sandwich, a Mortar burger or a Terrorist meal (which happens to be vegetarian). Displayed at the entrance is the restaurant’s slogan, “Sandwiches Can Kill You”. 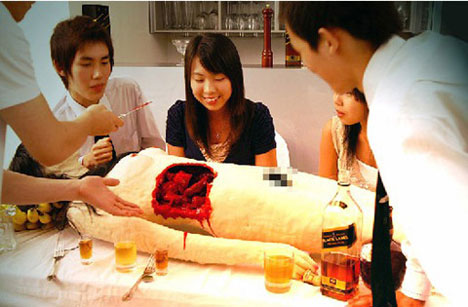 ‘Nyotaimori’ in Japanese literally means ‘female body plate’, and this restaurant named after the tradition of eating sushi and sashimi off a nude woman’s body takes the concept to a whole new level. An edible body, with dough ‘skin’ and sauce ‘blood’ is wheeled into the room on a hospital gurney and placed upon a table. The hostess begins the meal by cutting into the body with a scalpel and then patrons dig in, operating on the body to reveal edible ‘organs’.

The only restaurant in the world dedicated to birth control, Cabbages & Condoms in Bangkok, Thailand offers not mints on your way out the door, but condoms. Their slogan, emblazoned on t-shirts in the gift shop, is “Our food is guaranteed not to cause pregnancy”. Menu items include the ‘Spicy Condom Salad’, fried Shanghai noodles spiced with herbs. The restaurant benefits the Population and Community Development Association (PDA). 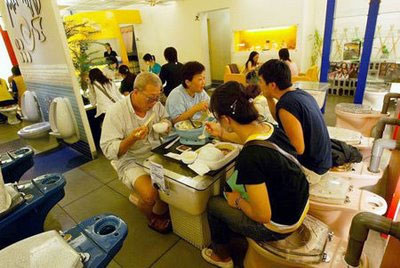 Perhaps the best-known strangely themed restaurant is Modern Toilet in Taipei, Taiwan, where hungry customers take a seat on Western-style commodes and enjoy feces-shaped chocolate soft serve in miniature toilet bowls. Toilet rolls are hung over the tables for use as napkins, and drinks come in miniature urinals. The toilet theme continues throughout the restaurant, with ‘WC’ signs hung as décor. 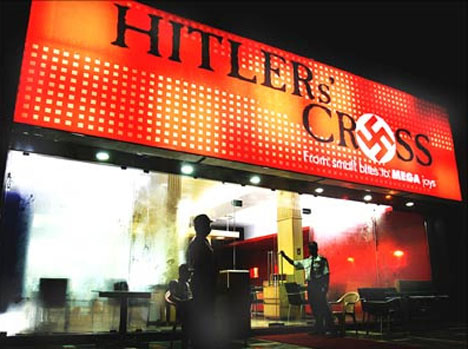 ‘Hitler’s Cross’, in Mumbai, India, understandably provoked a lot of anger from the community when it debuted in August of 2006. On display was a giant poster of Hitler, and the ‘o’ in ‘cross’ on the restaurant’s large illuminated sign contained a swastika. Just one week later, the restaurant was forced to change its name to the ambiguous ‘The Cross’ and remove all Hitler and nazi memorabilia. 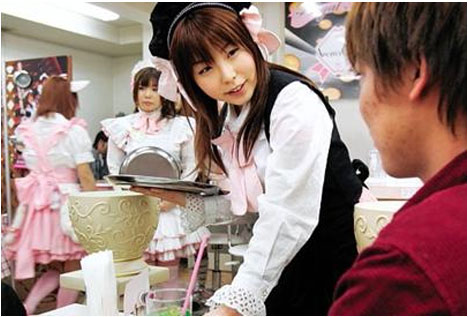 Those with maid fetishes and fans of Japanese ‘otaku’ (geek) culture can enjoy a meal like no other at one of the many maid-themed cafes in the Tokyo area, including this one called ‘@home’. Giggling women in cartoonish maid costumes call patrons ‘master’ and pat them on the heads like babies. It’s not about the food here – which is usually overpriced and less than appetizing, like spaghetti topped with ketchup. It’s about the service, which often includes playing games like Barrel of Monkeys (for a fee, of course) and, uh, ear cleaning.

It’s often said that if you take away one or more of your senses, the remaining ones get stronger. That’s the idea behind Pitch Black, a Beijing restaurant where patrons eat in complete darkness. Illuminating devices like cell phones and watches are strictly forbidden, and it’s so dark you can’t see your hand in front of your face. Don’t think you can get away with any funny business, however – the waiters wear night-vision goggles. 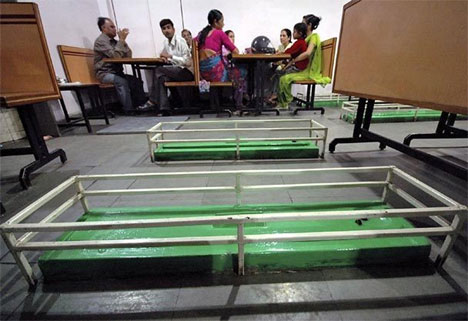 Image via The Seattle Times

Being surrounded by coffins while you eat is one thing, but it’s an entirely different matter when they’re occupied. The New Lucky Restaurant in Ahmadabad, India began as a tea stall outside a centuries-old Muslim cemetery, and grew to encompass it over the years. The graves, situated between tables and often topped with candles, and resemble green-painted concrete coffins. One is said to contain a 16th century Sufi saint. Business is brisk, and the owners say that the graves bring them good luck.

When a group of undertakers set out to start a restaurant, you know it’s going to be weird. And indeed, ‘Eternity’ restaurant in Truskavets, Ukraine is a windowless building shaped like a giant coffin. Inside you’ll find funeral wreaths, black shrouded walls and human-sized coffins. Menu items include dishes with names like “Let’s meet in paradise”. 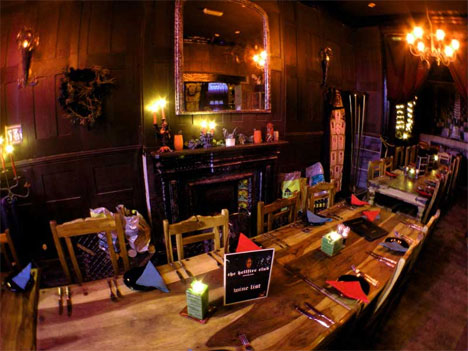 The Hellfire Club, with its gothic décor and creepy theme, might not seem like a likely place to enjoy a world-class meal, but the food here is said to be divine. It’s located in a reportedly haunted 19th century building and resembles a dungeon, with skeletons, coffins and red lights strewn throughout. Menu items include steaks named ‘Kiss of the Vampire’ and ‘Cannibal Holocaust’. 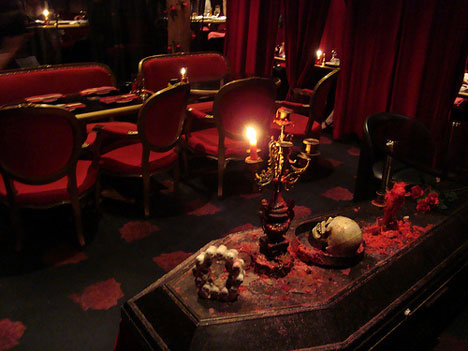 Continuing the creepy, otherwordly themes is the Vampire Café in the Ginza section of Tokyo, where the interior is almost entirely blood red. Guests are ushered down a long hallway with red blood cells superimposed on the floor. Inside, the décor includes heavy velvet drapes, black coffins dripping with red candle wax, skulls and crosses. Many of the meals are vampire-themed, and diners drink red cocktails from martini glasses. 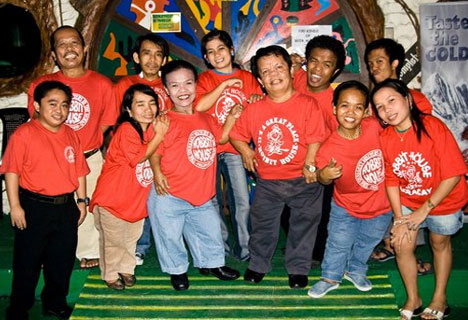 Long before the Lord of the Rings trilogy debuted on theatre screens, the Hobbit House was founded in Manila by former Peace Corps volunteer and Tolkein fan Jim Turner. Don’t expect to find the sort of lush Middle Earth scenery that filled the movies, however – what you’ll encounter instead if you stop to dine at the Hobbit House is a staff of ‘the smallest waiters in the world’. That’s right, check your political correctness at the door – this is one group of little people who are okay with being referred to as hobbits. 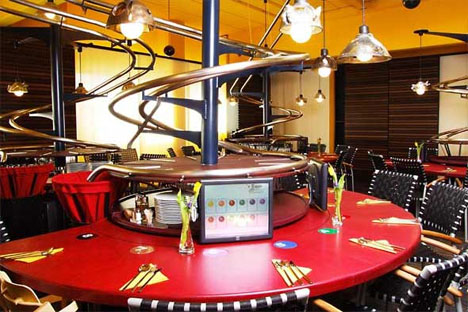 One restaurant in Nuremburg, Germany cut out waitstaff altogether, relying on robots instead. Alas, they weren’t walking, talking robots wearing aprons or anything really fun like that. Rather, it was centered around automation – customers ordered via touch screens, and moments later the food traveled to their tables on a spiral slide. It might have saved diners money on tips, but apparently the concept didn’t go over too well, as the restaurant was not open long.

You wouldn’t think the Chinese people would be eager to relive the Mao era while casually dining, but patrons at Shaoshan Chong line up to consume local delicacies served by waiters in the Red Guard uniform. The Red Guard was the army unit formed by Mao Tse Tung during the Cultural Revolution (1966-1976), which aimed to wipe the country free of revisionist and Western influence. 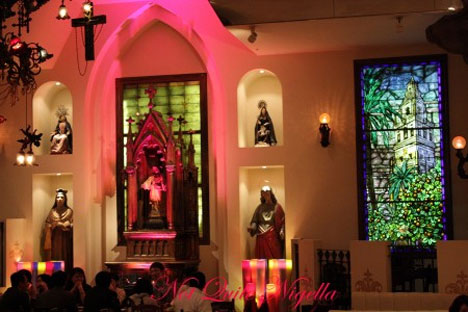 Image via Not Quite Nigella

Catholics might get a bit squeamish about the décor at the Christon chain of cafes in Tokyo, which is a bit on the gothic side. At the entrance you’ll find a glass display of the Virgin Mary, and inside is an elaborate and slightly macabre display of gargoyles, statues of saints, stained glass windows and even an authentic altar. For those interested in checking it out in person, the food is said to be fabulous and quite reasonable.