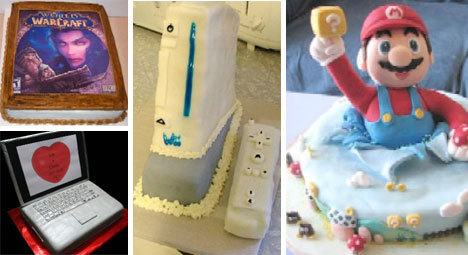 Even geeks have got to eat, and when pizza’s just not enough, there’s cake. Not just any cake either – the surest route to geek satisfaction is a slice of pi. Pie, that is. The first twenty artistic and geeky cakes uncovered more sweet servings then you could shake your Wii at, so sharpen up the knives and prepare for sugar shock from scrumptious Super Mario to sacrilicious Barack Obama! 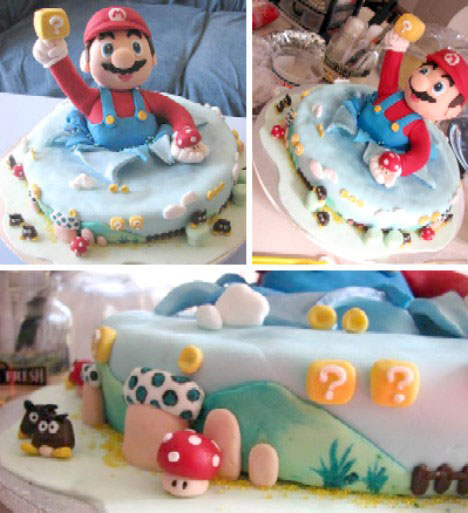 Geeks come in many varieties: gamers, techies and fanboys just to name a few. A roll of the 12-sided dice points to the gamers, who lead off with the above classic Mario Cake. Save some for Luigi! 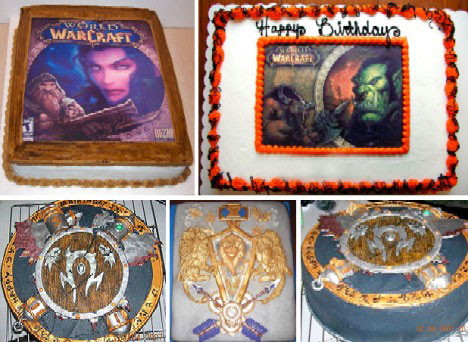 Mario may be one of the original game characters but many geeks have moved on to more adult-oriented pursuits. No, not those pursuits (though the cake possibilities are enticing); more advanced games such as World of Warcraft. The above cake is sure to make anyone, regardless of their level, go WoW! 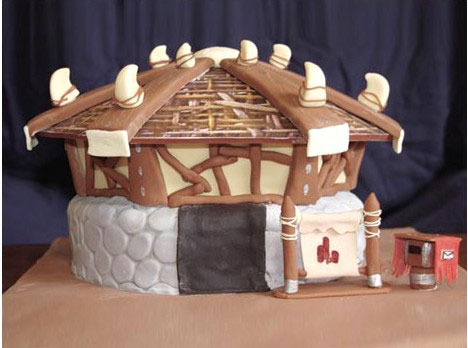 Here’s another World of Warcraft cake but for this one, you’d better be working overtime at the gold mines. Eden Cakes charges $350 for this repro WoW building but at least it provides 25 servings… do hardcore Warcrafters have that many real friends? 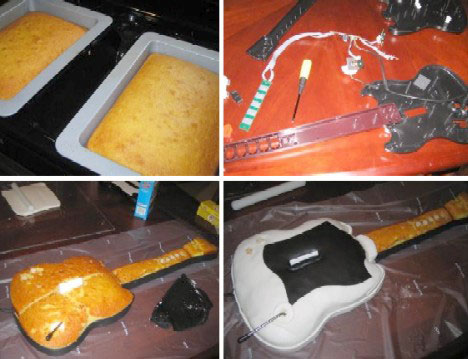 Interactive games like Guitar Hero are getting more geeks out of their chairs, only to get them back there once its time for dessert. This groovy Guitar Hero cake was made by Eric Vass for an Engadget design composition, in which he finished second. It’s made using a real, working Guitar Hero controller. His Mom might be less than pleased but at least Vass got to eat the cake. 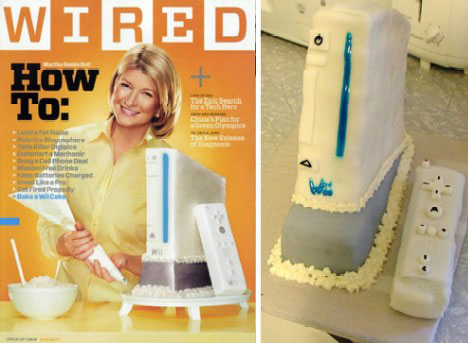 Nintendo’s smash hit Wii game system has spawned more cakes than you can shake your Wii at, but Wired’s faux Martha Stewart cover takes the cake (never mind that it’s a cardboard prop). Geeksugar (an appropriate source for this post if there ever was) provides this image of the prop and beside it, the real deal from Flickr user Rufus50, a guy whose cake-decorating talent rivals even mahvelous Martha. 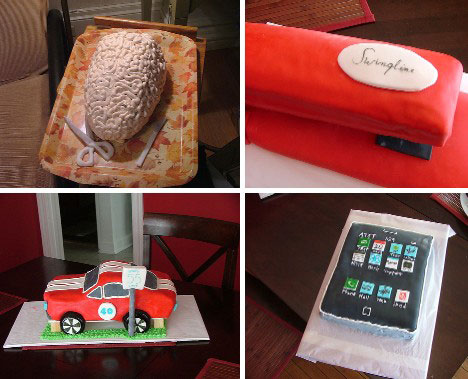 Rufus50 designs cakes for geeks and non-geeks alike, but the, er, organic Brain Cake at above top left was made for the ultimate uber-geek, a brain surgeon. 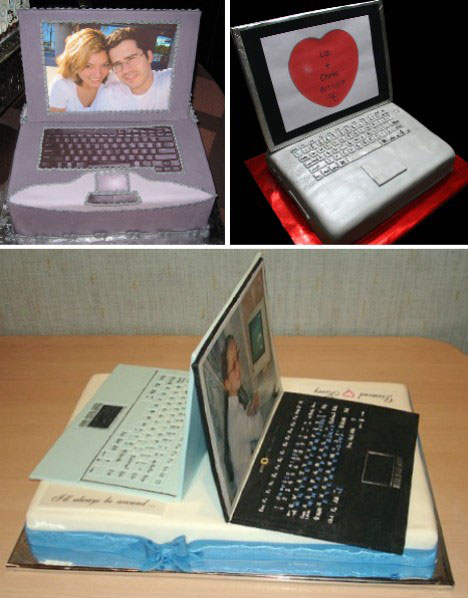 Geeks do get married – at least, those with a Gates-ian knack for turning their obsessions into cash have a much better chance. Even run-of-the-mill, “Beauty and the Geek” types can find their match though the magic moment may have happened in an online chat room. The above wedding cakes pay tribute to guys & gals who have broken the stereotype of Geekdom, preferring to procreate rather than procrastinate.

(image via: Blog Wired and CakeWrecks)

Speaking of procreation, the cake creation at above left salutes the miracle of birth, well, pre-birth – in true geek style, thanks to the edible ink photo. Who else would celebrate with an Ultrasound Cake? Says the proud papa, “We thought this was hilarious (if slightly creepy, in a good way).” Just to the right is another example of edible ink photography that completes any celebration of successful potty training. 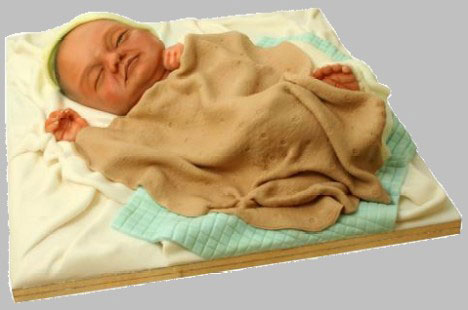 Not so hilarious and more than slightly creepy is this cake by British sugar artist Michelle Wibowo. The following high-speed video features Wibowo herself creating the baby cake, accompanied by disturbing techno Flight Of The Bumblebee background music. 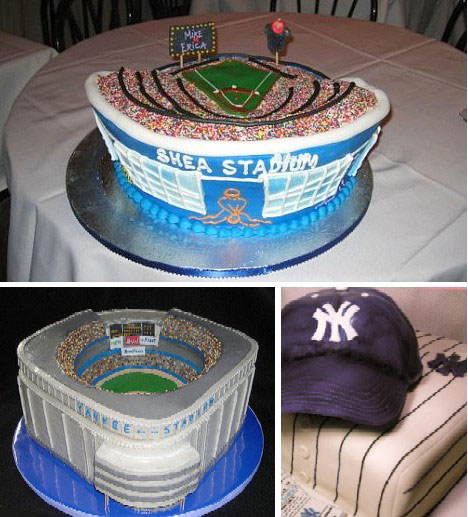 Sports are thought to be an obsession of jocks, but even sports fanatics can go all geek-tastic on over-the-top cakes – like the Yankees and Mets stadium cakes shown above. It ain’t over til it’s over… or until the fat lady gobbles up the last crumb. 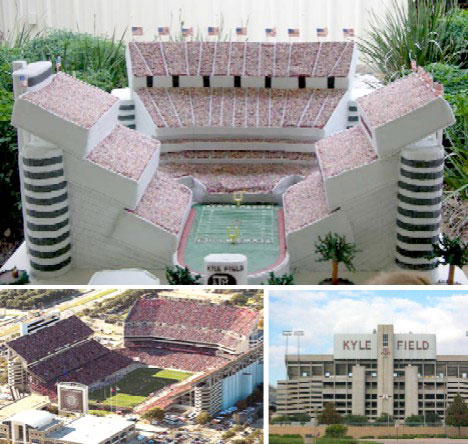 Both Yankee Stadium and Shea Stadium are soon to be no more, but we’ll always have Kyle Field – depicted here in miniature (though the term is relative) above images of the actual stadium. Kyle is where the Texas A&M Aggies play, and this cake looks big enough for the entire school cheerleading squad to jump out of! 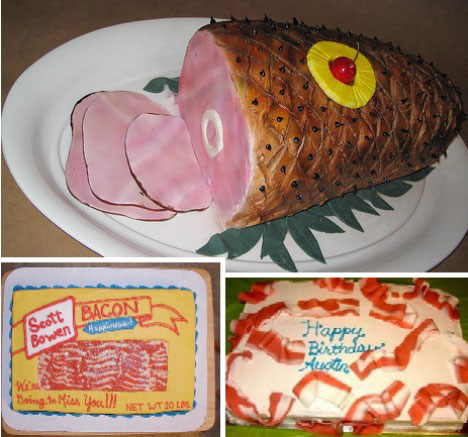 (image via: KQED and Snarkygurl)

Good cake tends to make everyone pig out, so why not go with the flow? The Ham and Bacon cakes above look deliciously wrong. 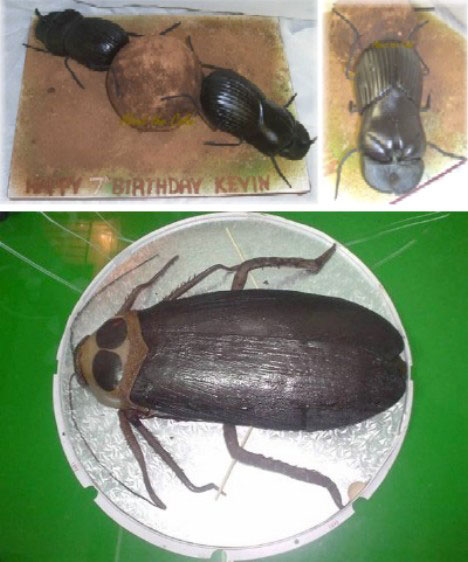 (image via: Alvin Robina and About The Cake)

The Cockroach and Dung Beetle cakes above are just wrong, period, unless they’ve been made especially for a budding young scientist. Even so… a dung beetle cake??

Artistic license doesn’t stop at imitating the wonders of the insect world. Feast your eyes (and one ear) on these Van Gogh Starry Night cakes.

Van Gogh is famed for his haunting self portraits but the ultimate geek homage has to go to those world leaders who make themselves the object of their nation’s adoration. What better way to do that than with a cake? Created by Yuri Shabelnikov in the late 1990s, the life-size Lenin cake above was (unlike the late Soviet leader) quickly eaten by onlookers shortly after being put on display. 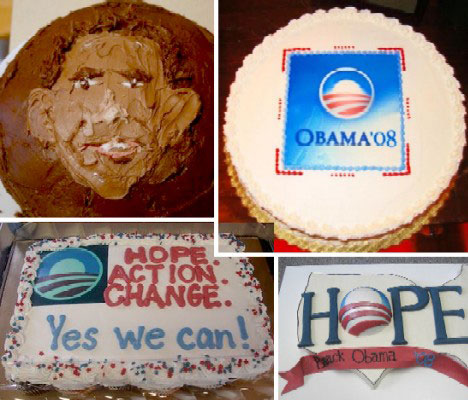 Will this year’s presidential candidates fair any better? If the tasty selection of Barack Obama cakes above is any indication, the personality cult is more than a half-baked idea. So, does Obama have the geek vote? If cakes are the barometer, he sure does – McCain and Palin cakes are about as rare as lipstick-wearing pitbulls – and that’s one cake we’d all like to see!