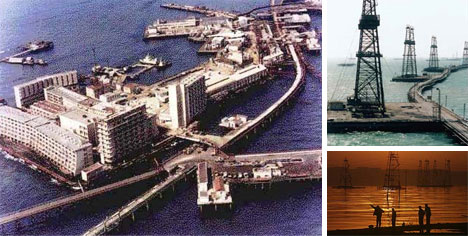 Off the coast of Azerbaijan sits what remains of one of the strangest organically-evolved cities in the world. Oily Rocks started with a single path out over the water, built on the backs of ships sunken to serve as foundations. This system of paths grew and evolve to serve the oil-drilling industry and eventually were widened to create space for houses, schools, libraries and shops for the workers and their families. Today, most of it sits abandoned and some paths and buildings have sunk back under the surf never to be seen again.