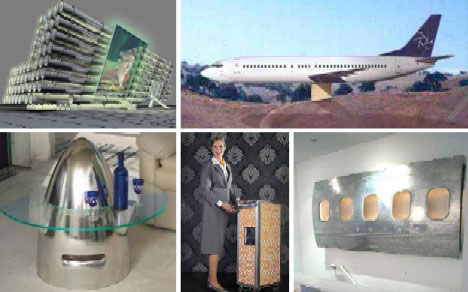 Everything wears out sooner or later and aircraft are no exception. What becomes of these winged wonders once their airborne adventures have ended? Some are merely abandoned; transforming from “I soar” to eyesore. Others take on new life through recycling. Here are 15 well-grounded examples. 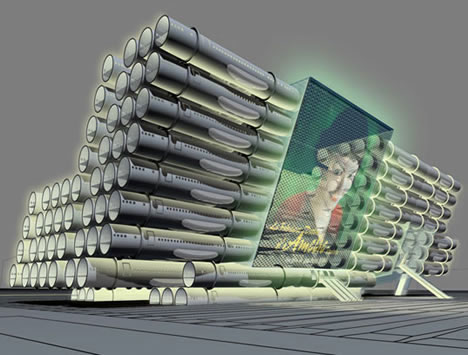 Some parts of disused airplanes are costly and/or difficult to recycle, especially the cylindrical fuselages. Design firm LOT-EK has proposed using more than 200 fuselage sections from old Boeing 727 and 737 jets to build the startlingly beautiful New Jalisco Library in the Mexican city of Guadalajara, front view shown above. 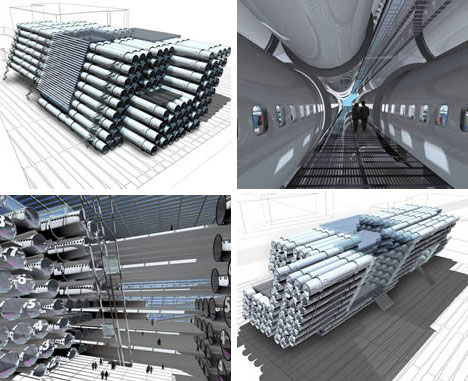 Mass-produced over several decades, decommissioned 727 and 737 jets lie scattered across the American west in sprawling “parks”, so recycling several hundred fuselages would help put a dent in the stockpile. 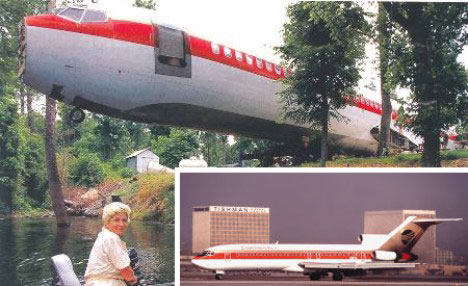 Designed to withstand extremes of temperature and pressure over years of use, retired aircraft have been used to create some very offbeat homes. Such is the case with Jo Ann Ussery’s jetliner home, formerly a Continental Airlines 727. Ussery paid just $2,000 for the scrapped jet though subsequent expenses were 14 times that amount. The unique home features a Jacuzzi in the master bathroom and one of the original lavatories soldiers on in its original function.

Above are some interior photos of Jo Ann Ussery’s far-from-plane home, which she graced with the name “Little Trump”. The rooms seem bright and… is that wood paneling on the living room wall? 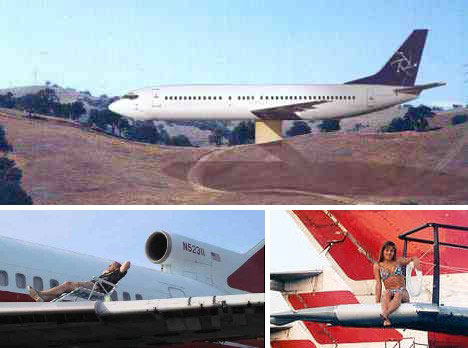 With so many decommissioned jets just lying around, it just makes sense to put them to use and a company named Max Power is doing exactly that. The Tennessee company offers “Airplane Homes” starting in the upper $200,000 range. According to Max Power’s president, Thomas Bennington, “The structure is built to carry up to 173 people at over 600 mph and in temperatures of -70 degrees F. It cost millions of dollars to build. We are offering it finished and delivered at prices that compare to conventional homes.” Bikini model not included. 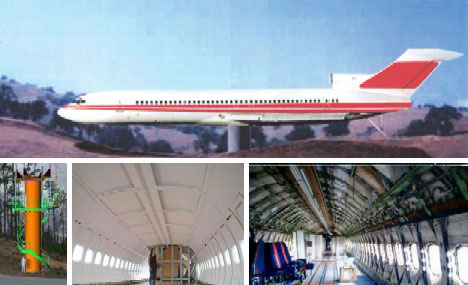 Unlike other homes, buildings or structures made from aircraft parts, Max Power uses virtually the entire structure of a Boeing 727 jet. When mounted on a sturdy concrete and metal support pole, the jet is free to swing into the wind like a weathervane. Needless to say, a minimum of one acre of clear land is required for the installation. 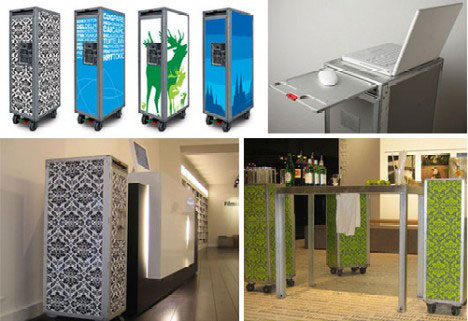 There’s just so much one can do with an entire jetliner, but when it comes to the accessories and accoutrements, well, the sky’s the limit. Take these snazzy refurbished airline trolley carts by German designer Stephan Boltz. With the Bordbar collection, Boltz retains useful features of the carts including locking wheels and doors that open 270-degrees, then adds style with the buyer’s choice of panel treatments. 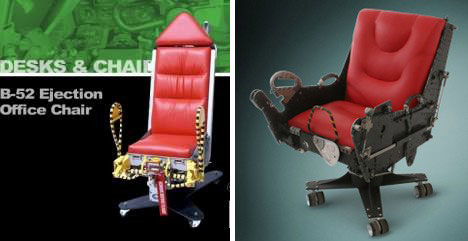 Airplane seats, both military and commercial, are also a favored choice for recyclers. Original seats are built to rigid specifications and among other things, use fire-resistant materials in their construction. Moto-Art offers a number of recycled, refurbished and re-worked airplane seats to the public including ejection seats from F-4 Phantom fighters (right) and B-52 Stratofortress bombers (left). Just the thing to get you through – or out of – that deathly boring budget meeting! 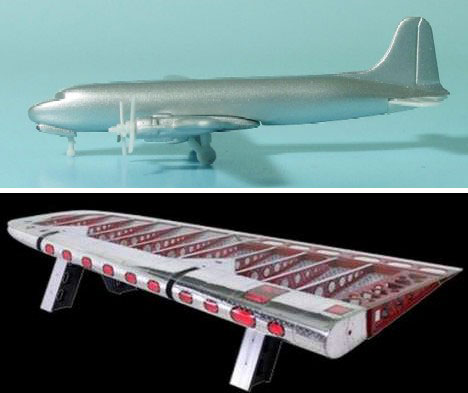 Of course, you’ll want to stick around if said meeting is held around MotoArt’s spectacular DC-4 Conference Table. The table is mounted on dual-aluminum I-beam legs and displays red LED lighting along its polished aluminum leading edge. Coasters are highly recommended. 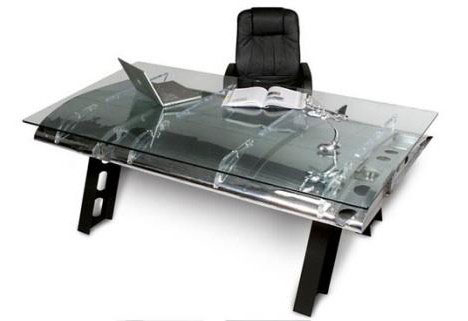 The above desk is built similarly to the conference table but is smaller, perfectly sized for the office desk pilot. Some may consider it pricey at $12,000 but how many execs can say they spend the better part of their work day behind the wing of a Lockheed C-130 military transport plane? 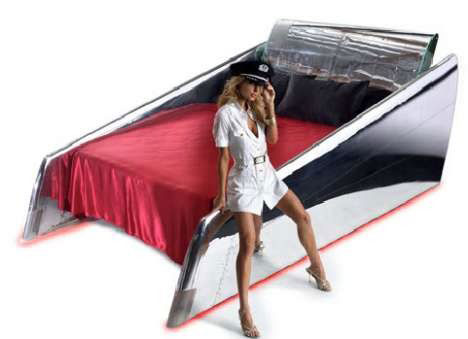 Back home, the suggestively named Mile High Bed – possibly used because Boeing had dibs on “Dreamliner” – is crafted from a pair of DC-9 rear stabilizers that act as side rails with a C-130 cargo jet’s wing flap section for a headboard. 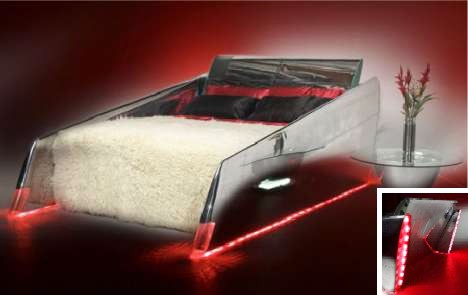 A night-time view of the Mile High Bed shows the built-in red LED lighting to best advantage. Please return your flight attendant to the upright position.

Those seeking to add an atmosphere of power to their room might consider a glass-topped table made from aircraft engine components. The coffee table above left is made from a cluster of polished chrome F4 Phantom fighter jet afterburner cans while the table to its right is centered by a polished chrome engine nacelle. 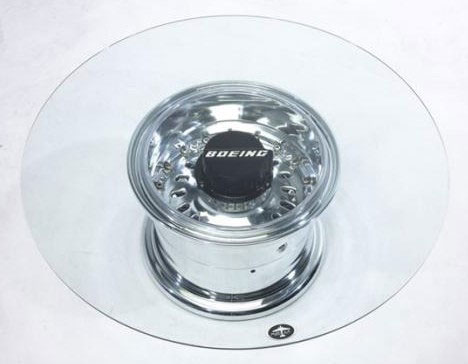 Wheels can be recycled as well, as the above table made from a used Boeing 707 wheel demonstrates. 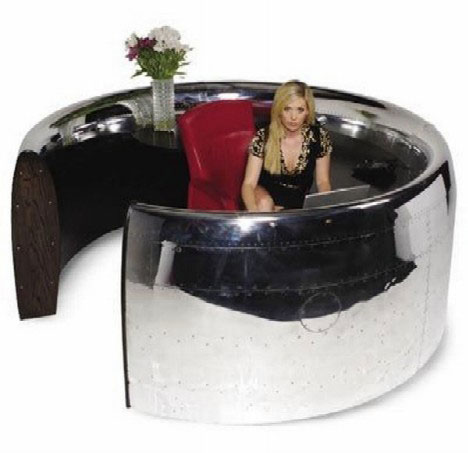 Jet engines and their housings are even more plentiful than entire airliners, so it makes sense that they would take on new lives in different incarnations. Take the Jet Engine Reception Desk above. Polished to a metallic gleam on the outside and outfitted with storage drawers on the inside, the 100-inch wide cowling once saw service attached to a 747 jumbo jet but now acts as the ultimate power desk. MotoArt also stocks a slightly smaller desk fashioned from a DC-6 engine. 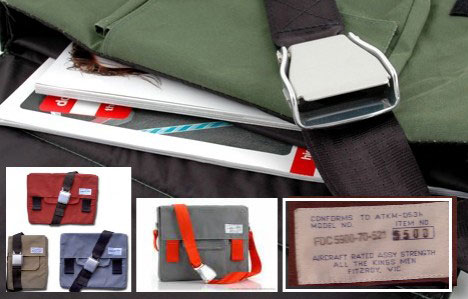 Seatbelts are another aircraft component that are available in quantity and were built to a high standard. All The King’s Men of Melbourne, Australia, have recycled airliner seatbelts into stylish laptop bag straps. A little spit & polish (well, less the spit hopefully) is all that’s needed to give these veteran lifesavers a new life on the ground. 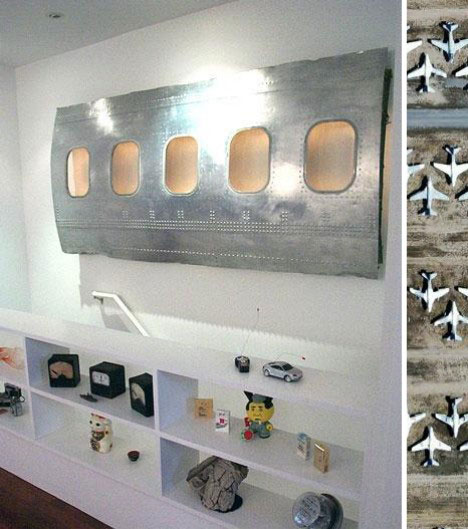 The DIY recycler-cum-artist can find aircraft graveyards to be a rewarding resource. Just ask Todd Lappin, who sourced the side window panel from a 747 to give his living room a somewhat “airy” look. Not all storage facilities sell to the public so be sure to ask!

Last but not least, if hanging a piece of an airplane on your wall just isn’t enough, then why not go whole hog and buy an aircraft – at least a chunk of one – to BE your living room! That’s what the seller of a 19 square foot section of a former Boeing jet is hoping for. Included in situ are 4 “two fully-equipped airplane toilets, a kitchenette, storage lockers, and onboard in-flight video equipment.” If this isn’t the coolest home theater set-up going, then what is? Best of all, unlike real working jets you can choose your own movies, serve good food and even light up a cigar if you so desire. Flying the friendly skies was never this much fun!