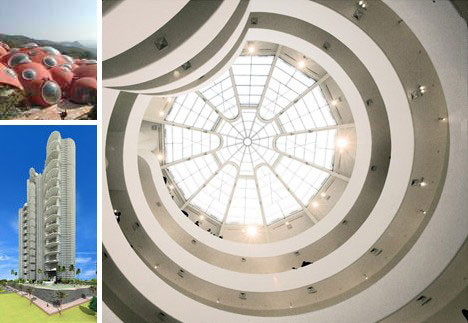 Organic: shapes, methods and patterns modeled after those found in living systems. When applied to architecture, the results can be interesting at least, mesmerizing at best and are always a challenge for designers and builders alike. These 12 examples of organic architecture showcase some of the ways designers transform a lot by learning to bend a little. 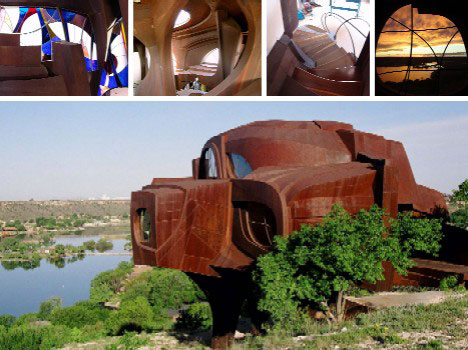 Architect and visionary Robert Bruno has been building his organic, fantastic, metallic Steel House since 1974. Overlooking a cliff near Lubbock, Texas, the huge structure has grown from a spindly metal tripod of beams to a massive accumulation of rusted steel – 110 tons at last word! Much like an actual living being, Bruno’s house continues to grow and evolve. 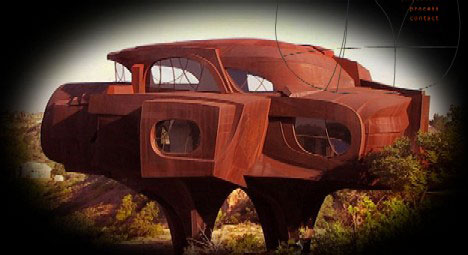 Above is a full view of the house, which strikes some as influenced by the Spanish surrealist artists Antoni Gaudí and Salvadore Dali. Check out the video below to learn more about the Steel House, Robert Bruno and his reasons for building it: 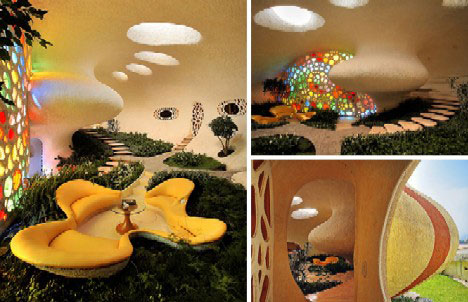 Steel may not seem very organic but neither does ferrocement – an earthquake resistant material that is very flexible when wet yet exceptionally strong when cured. Senosiain Arquitectos used ferrocement to construct the above nautilus-like home for a Mexican couple who wanted something, well, a little different. They got more than a little – the swirling, snail-like structure looks like no other abode, inside or out. 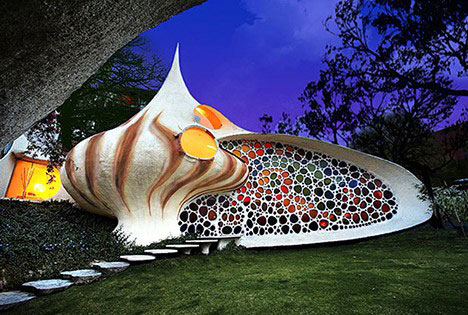 The 2006 home cost a reasonable 160,000 euros (just over $200,000) to build one would guess living in it would be a real trip, so to speak. One possible drawback, though, would be an attack by a giant hermit crab looking for new digs. 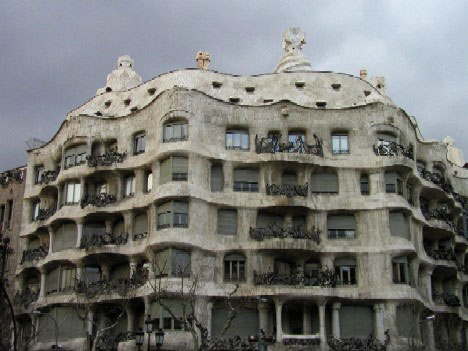 (image via: In Between Days)

Organic architecture is hardly a new trend, even allowing for shelters and structures constructed in the pre-industrial age. If only “modern” architecture is considered, the Casa Milà in Barcelona, Spain, would have to be given props for its daring originality. Designed by the aforementioned Antoni Gaudí, the Casa Milà was built between 1906 and 1912 with a comprehensive renovation being undertaken in the 1980s. 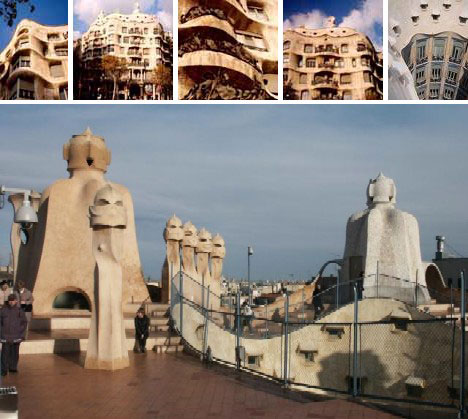 The building, known also as La Pedrera or “The Quarry”, features a bizarre stone sculpture garden on its roof that would have been even more outrageous had not city planners put their collective foot down. 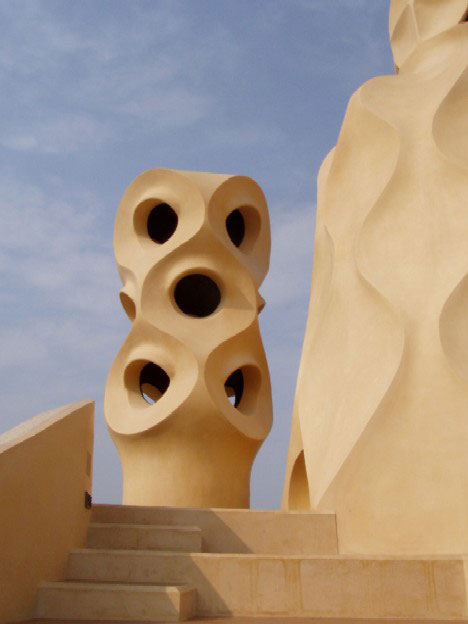 One last lingering look at the Casa Milà focuses on one of the timelessly styled figures on the roof. The design, while shocking for the early 20th century, would fit in well with today’s style – or that of 2008 BC.

Once Gaudí had broken the mold, other artistic architects took the organic ball and ran with it. A perfect example is the Einstein Tower in Potsdam, Germany. Conceived by Erich Mendelsohn in the depths of World War I, the tower was not opened until 1924 and is still used today as a functioning solar observatory. 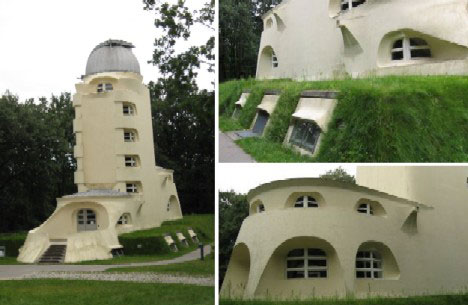 According to Otto Friedrich, author of Before the Deluge, A Portrait of Berlin in the 1920’s, Mendelsohn somewhat nervously took Einstein himself on a detailed tour of the finished tower. The acclaimed genius remained silent until some hours later. Finally, when pressed for his opinion by the building committee, Einstein whispered but a single word: “Organic”. 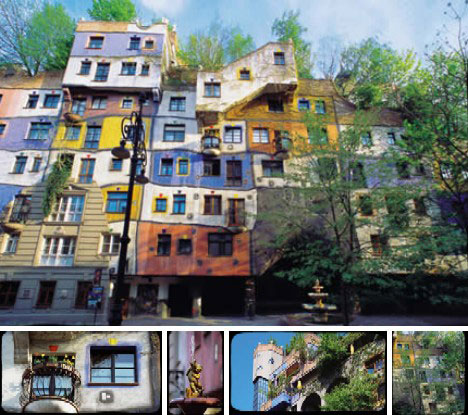 The word “organic” conjures up images of living things, and the Hundertwasser House Vienna reflects that definition by incorporating soil, grass and trees into its structure. The house – actually a suite of 52 apartments and offices – was built in the early 1980s by architects Prof. Joseph Krawina and Peter Pelikan. The building’s organic features spill out into the street below in the form of wavy pavement that creeps up and even into a decorative fountain. 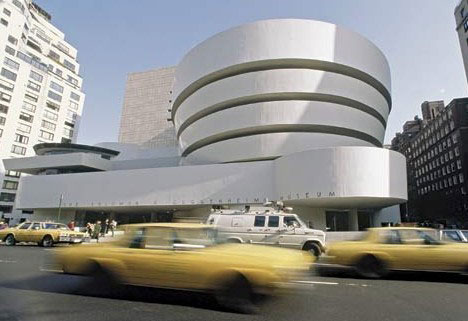 “I need a fighter, a lover of space, an agitator, a tester and a wise man. I want a temple of spirit, a monument!” So wrote Hilla Rebay, art advisor to Solomon R. Guggenheim, to architect Frank Lloyd Wright in 1943. The “temple” which sprung from Wright’s imagination is the remarkable Guggenheim Museum located next to New York’s Central Park. 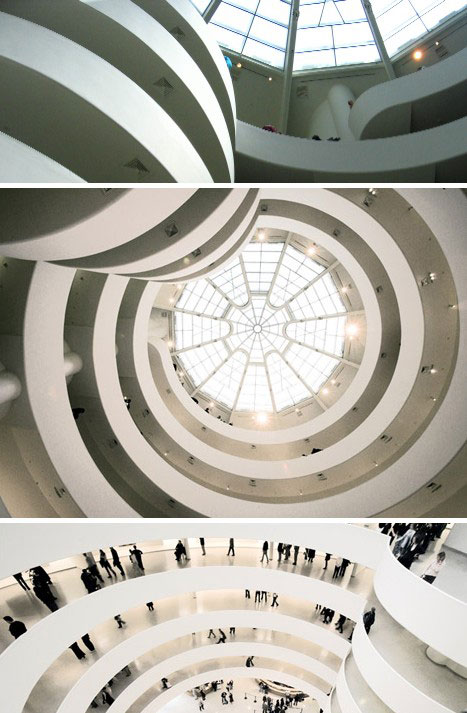 Wright later commented that “I can think of several more desirable places in the world to build this great museum,” apparently feeling that the cosmopolitan city was noisy, congested and overcrowded. It’s somewhat ironic that the Guggenheim has become a lasting symbol both of New York and of Wright himself. 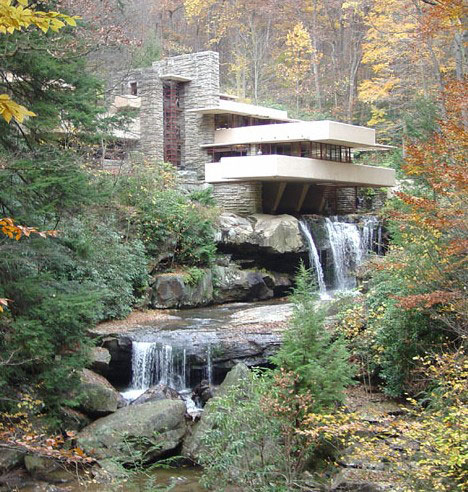 No discussion of Frank Lloyd Wright and organic architecture would be complete without mentioning the magnificent Fallingwater House near Pittsburgh, PA. Designed by Wright for department store magnate Edgar Kaufmann Sr. in 1935, the project took 2 years to complete and cost $155,000 – an appreciable sum in those bleak Great Depression years and equivalent to $2.3 million today. 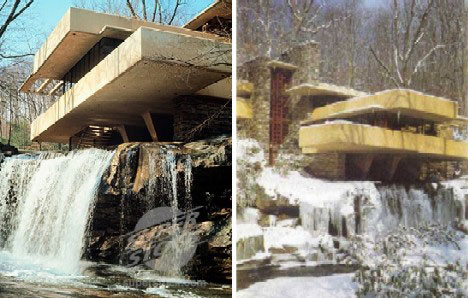 (image via: Superstock) and Onlineartcenter

Fallingwater was revolutionary for its day in that instead of pushing nature aside, Wright incorporated it into the heart of the home. For many, Fallingwater epitomizes what architecture can and should be. It’s aid that the house inspired Ayn Rand to write her epic novel, The Fountainhead. The views above show Fallingwater in summer (left) and winter (right). 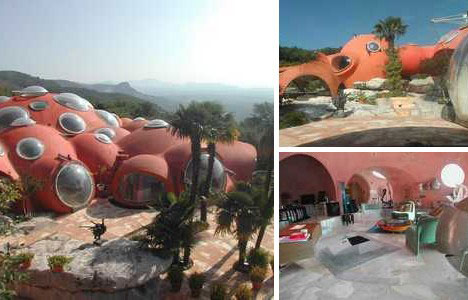 (image via: Book of Joe)

Organic architecture of a different kind is represented by the Bubble House, designed by Antti Lovag and purchased by Pierre Cardin in 1990. Illuminated by the warm sun of France’s Côte d’Azur, the design has been termed by some to be “one part house, two parts hallucination.” 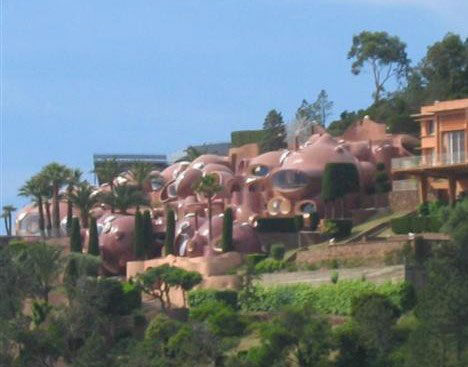 Like Robert Bruno’s Steel House in Lubbock, the Bubble House is a work in progress that is still unfinished 38 years after construction first began. Things have dragged on for so long that the wealthy French industrialist who commissioned the house passed away, allowing Pierre Cardin to swoop in and buy the structure for a bargain price – in the $3 million range! 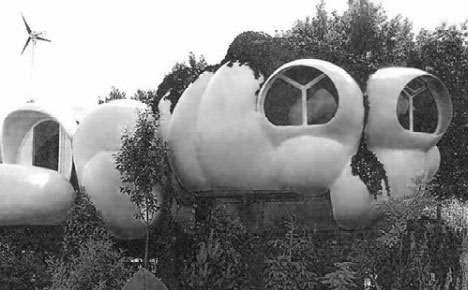 The soft, rounded look of the Bubble House and other similar organic architectural designs reminds one of the album cover art of Roger Dean. An English artist and designer famed for his futuristic urban cityscapes displayed on Yes and Osibisa album covers has gone one step further by bringing his ideas for living into reality. 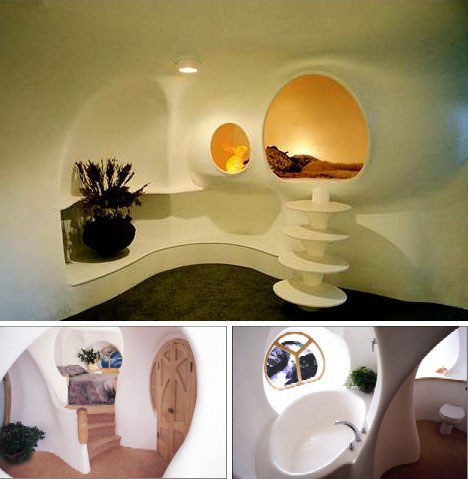 Dean’s “Home for Life” is a riot of organic forms inside and out. In contrast to some of the other designs mentioned here, Dean’s ideas are workable, doable and eminently livable. The project began with Dean’s desire to create a child’s bed based on safety and security from a child’s point of view. 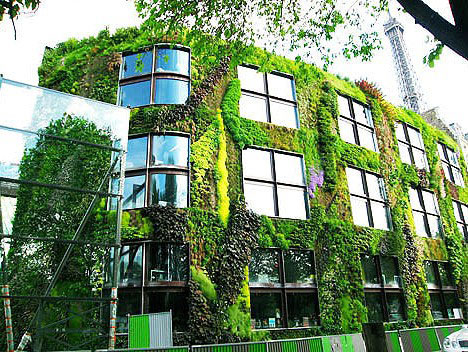 It’s fair to ask: Should organic architecture be green? Well, being environmentally friendly is one thing, but Patrick Blanc‘s creations actually ARE green – overlaid with a living carpet of plants and shrubs! As seen above in Paris’ Musée du Quai Branly, Blanc brings buildings to life in the shadow of the Eiffel Tower. 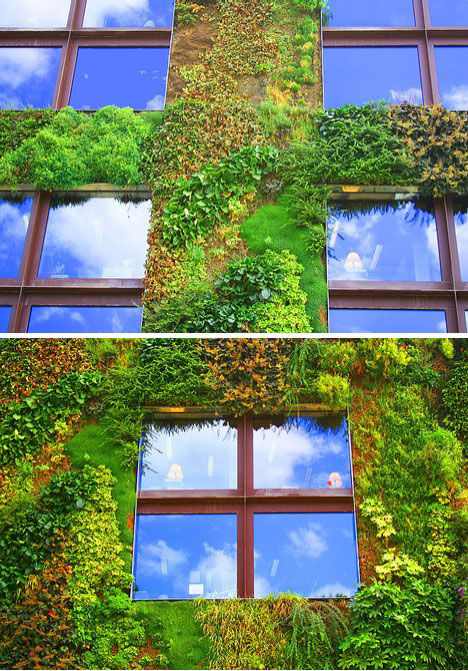 As can be seen in the closeup views of the Musée du Quai Branly above, Blanc weaves greenery into the walls so effortlessly it looks as if it grew there naturally. 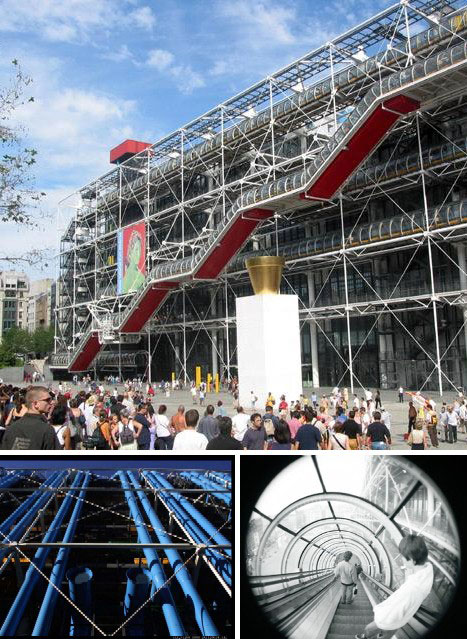 Also in Paris is one of the best known examples of organic architecture, though at the time of its design and construction in the early 1970s the Pompidou Centre was said to express an “exoskeleton” style. Certainly the inside-out look of the edifice approximates the look of an exoskeleton, but the exposed ducts and beams also remind one of anatomical drawings. Can’t get much more organic than that! 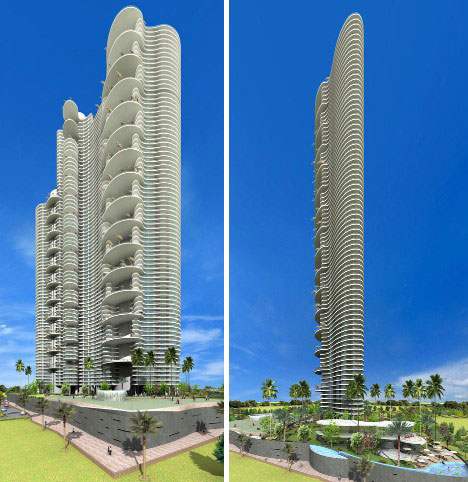 Last but not least is a mammoth project expected to dominate the skyline of Mumbai, India. “Waves” will soar 80-stories into the sky and will offer residents incredible views of the Indian Ocean from its delicately scalloped balconies. Architect Sanjay Puri took the crests of ocean waves as his inspiration, expressed in the undulating balconies which linearly traverse each floor. The upwardly flaring style of Waves seems to defy the laws of physics. It may look organic but – what would Einstein say?