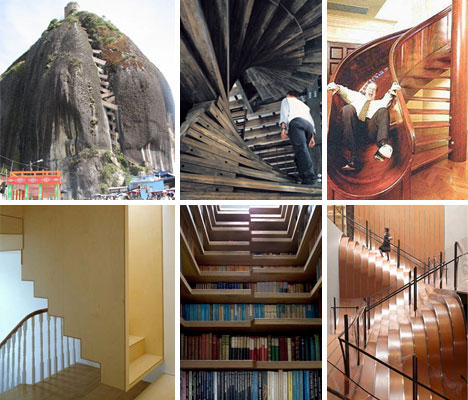 When it comes to staircases, most architects stick to the basics, putting safety and stability before aesthetics. But others strive to have both, and in some cases, their creations become the focal point of a room – more art installation than functional architectural element. Spiral staircase designs are impressive but other creative stairs can be made of glass seemingly float on air, and innovative wooden creations serve as book storage and seating. These stair designs that go far beyond the basic, becoming works of art, ecological wonders and a means of rediscovering the child within. 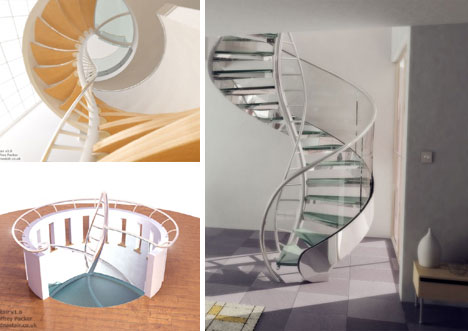 Designer Geoffrey Packard is known for his highly unusual staircases, and one of the more creative of his designs is the DNA stair concept. Packer’s series of DNA stair concept is clearly inspired by the double-helix shape of the molecules. His DNA designs are made from a variety of materials including glass, steel, carbon fiber and wood. Of the design inspiration, Packers says “Helical balusters are rolled the opposite hand to give the central spine and handrail to give the DNA form.” 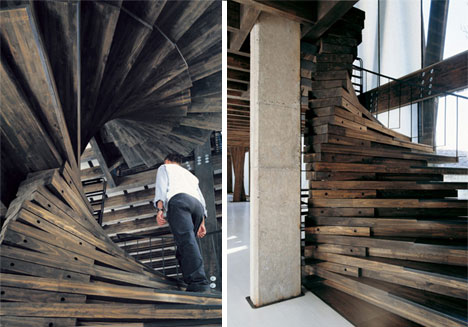 This dark-stained stunner is more than just good design: it’s part of a completely deconstructible building made from laminated timber. The idea is that it will never have to be demolished; it can be dismantled and reconstructed elsewhere should the need arise. The office building in Santiago, Chile by architect Alberto Mozó turns the idea of permanent structures on its head, since despite being easily disassembled, it has the potential to live on much longer than other buildings. 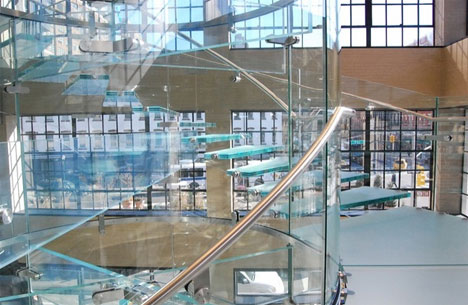 Apple stores are known for having tons of reflective, translucent glass surfaces, and the 3-story NYC location is no different. The glass staircases are, in fact, an attraction in themselves, but unlike those in the Michigan and San Francisco locations, the 14th St. NYC Apple store features a spiral glass staircase that really makes it appear as though visitors are floating on air. If you’re a lady who enjoys wearing short skirts, perhaps you’d best take the elevator. 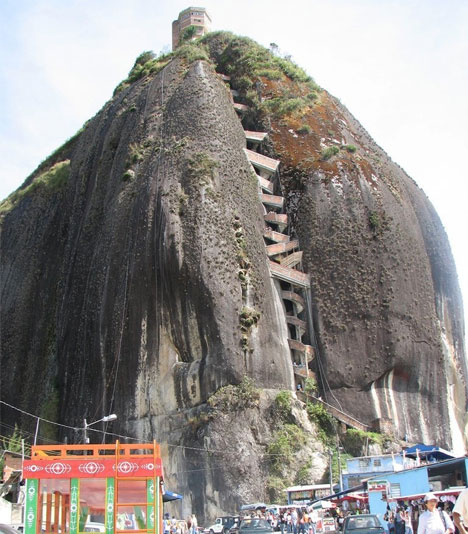 Visitors to the Piedra de Peñol in Medellín, Colombia, had best be prepared for quite a workout on their way up. There’s no elevator available in this amazing combination of natural and man-made wonders. 649 stairs lead to the top of this 200-meter-tall granite batholith, but the view once you get there is said to be worth the extraordinary effort required. 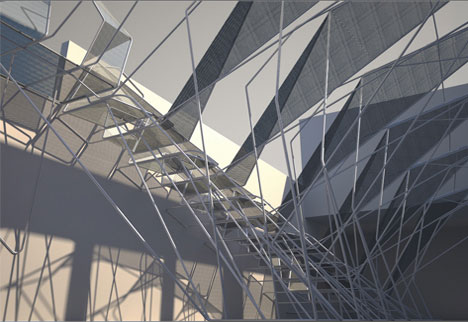 When Dwayne Oyler and Kelly Wu were asked to create an installation at the SCI-Arc gallery in Los Angeles, they decided to really take advantage of the space. The two, who own design firm Oyler Wu, created this exhibit called Live Wire in collaboration with engineering firm Buro Happold. The stairs link the floor level of the gallery with a catwalk above and are constructed of approximately 2,400 linear feet of aluminum tubing and rods. The installation will be up until December 14th, 2008. 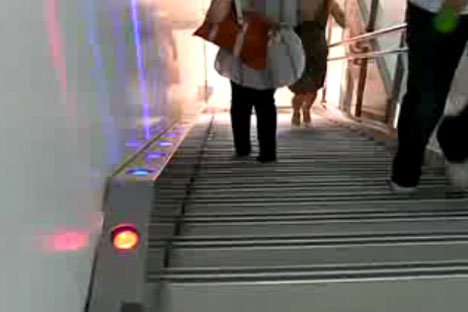 The stairs in the Sony Building in Tokyo do more than just get you from one level of the building to another; they provide an interactive experience, playing music as you climb. Each step has its own note, and as multiple people walk up and down, a random and dissonant tune is heard. Don’t play too long, though, or you’ll get kicked out of the building. Watch the video above to get the full effect.

Stairs for a Super-Tight Space 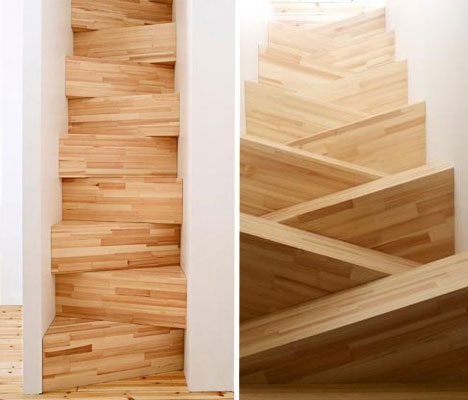 (image via: Below the Clouds)

There are lots of space-saving stair designs out there for people living in super tight spaces. Normally, you have a choice: aesthetically pleasing, or affordable. In this case, creative Swedish architects at Stockholm-based TAF Architect Office got to have both. These steep and narrow stairs occupy a space hardly bigger than a closet, and are made of economical pine boxes.

Stairs that Store All of Your Books 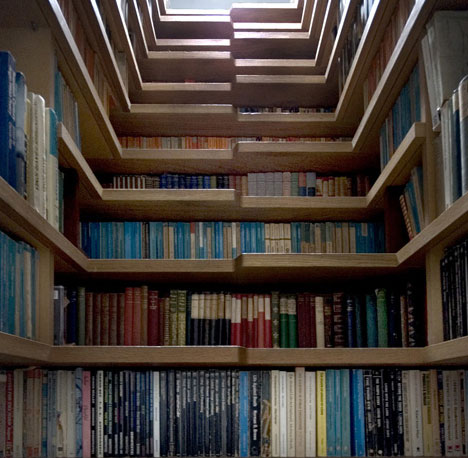 This incredible staircase is a lot to take in. It’s an ingenious way to store books, making it look so easy that we wonder why everyone living in a small space doesn’t take advantage of this setup. Installed in a tiny London apartment, the stairs allow the tenants to access a previously unused loft space while also creating a library for their book collection. A skylight above illuminates the staircase, making it easy to see all the titles, and the shape of each stair allows the book browser to take a seat while perusing the selection. 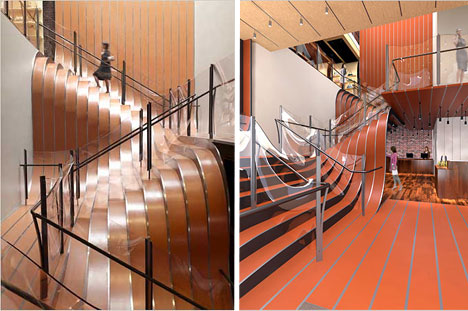 Architect Thomas Heatherwick is renowned for his unusual approach to problem solving. That definitely shows in the stairs he designed for the flagship Longchamps store in New York City, which are constructed of continuous strips of hot-rolled steel. Since the store had retail space situated above street level, he had to find a way to draw people up. These fluid and eye-catching stairs certainly do the job. 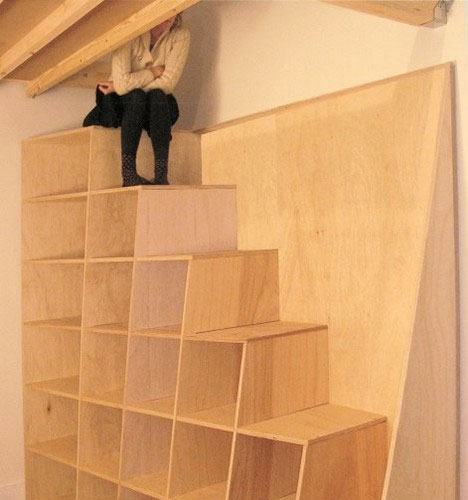 Some intrepid small-space dwellers save money by purchasing standalone flat-pack stairs that double as storage furniture. Apparently, loft bedrooms without built-in access are fairly common in Belgium, where creative landlords fit more people into a flat by making use of the high ceilings. This one was created by architects Voet-Theuns. 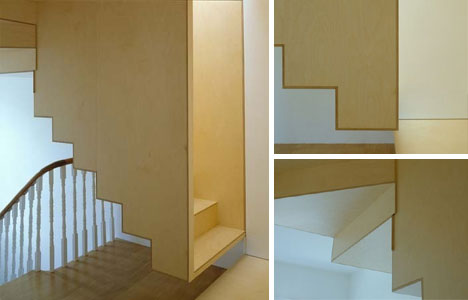 This stair design by Blencowe-Levine basically takes a staircase and turns it inside out, enclosing it instead of having the stairs open to the space. The space-saving ‘hanging box stairs’ lead to a new rooftop studio addition in a home in the Battersea area of London. 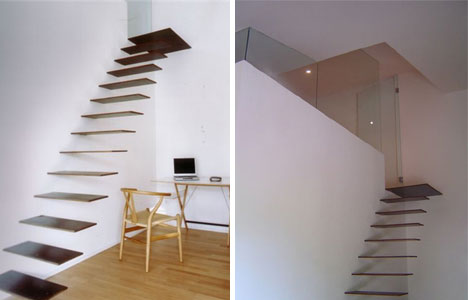 From the looks of these stairs by Spanish designer Jordi Vayreda, you might think only cats could make it to the top. They certainly don’t look like they’d support the weight of a human. But, Vayreda confirms that they can support 200 kilograms (over 440 pounds), saying “Steel is the material which we use to construct the staircases, 100 mm thick and each of them is welded to a 250 mm thick beam. The secret is putting reinforcements to prevent the inertias that can be generated and another one is lean the beam on two walls: the front wall and the lateral.”

Stairs Made of Skateboards 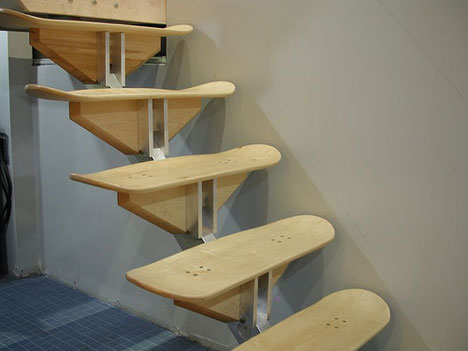 Leave it to a skateboard school to come up with the idea of using skateboard decks as stairs. The skateboards used in this staircase at the Thin Air Press were custom-made with concave on only one edge. They’re mounted to a solid aluminum beam (and, don’t worry, since this photo was taken, a handrail was added!) 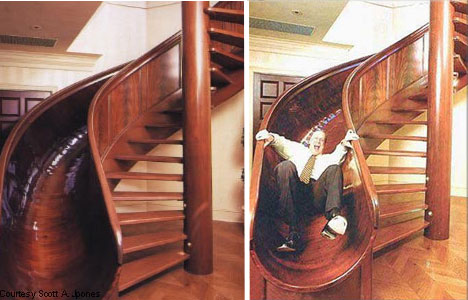 (images via: Forbes and Gizmodo)

When voicemail system inventor Scott Jones decided he wanted a slide inside his home, the bids he received were too high and he didn’t like the way the designs looked. That is, until he met woodworker Rodney Miller, who devised a wooden slide design using shipbuilding techniques. The resulting corkscrew wood slide, built alongside a set of traditional stairs, is over 16 feet tall and has a 13-foot drop. Construction of the slide, wasn’t easy, as Miller attests: “I originally started working on it while it was mounted on an axle so I could turn it at floor level. Eventually I had to add onto my garage so I could work on it while it was standing up to set the stair treads accurately.” 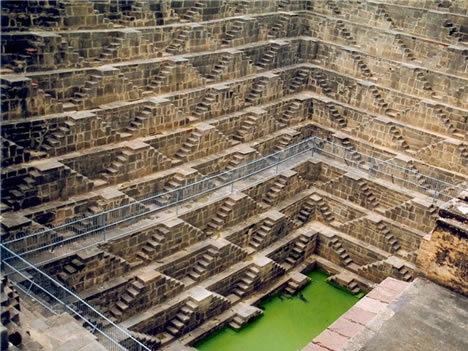 Chand Baori is a well in India with so many stairs, they seem more like aesthetic architectural detail than functioning structures actually made for climbing. Built in the 10th century, this well was created as a practical solution to the water problem in the area – the multitude of steps allowed residents to access water in the well no matter how low the level became. It’s thirteen stories tall and has 3,500 narrow steps.