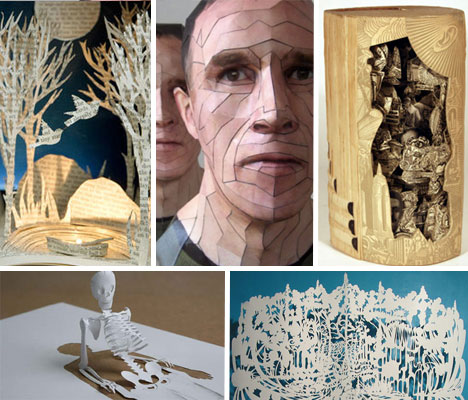 Paper isn’t the first medium most people think of when they imagine sculpture, but it has qualities that help papercraft artists create some of the most incredibly intricate 3D art ever seen. Master paper sculptors like Richard Sweeney, Brian Dettmer and Ingrid Siliakus cut, fold, glue and otherwise transform sheets of paper in various colors, sizes and textures into complex creations that mimic architecture, nature, the human form and subjects that are purely the products of their own fertile imaginations. 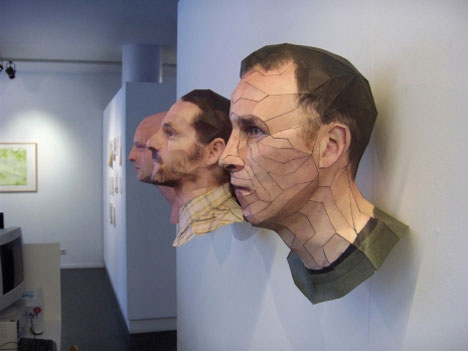 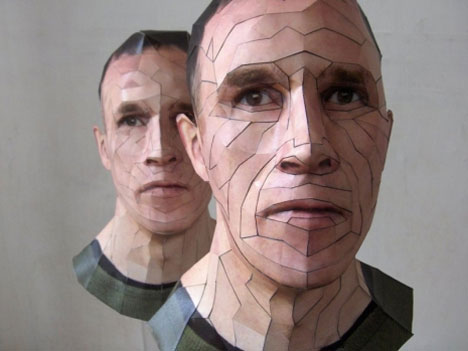 Eerie, faceted 3-D paper heads float on a wall like grotesque hunting trophies. They’re photo-realistic replicas of Rotterdam papercraft artist Burt Simons and his friends, created when Simons had a ‘mid-life crisis’ in 2006 and realized there wasn’t much of him that would be left behind. So, Simons decided to ‘clone himself’, sculpting his head in 3D and using photographs to texture it. He uses a computer program to flatten out the head into printable pieces of paper and then assembles them with glue. Simons says having his clones around helped him “get used to his bald spot”. 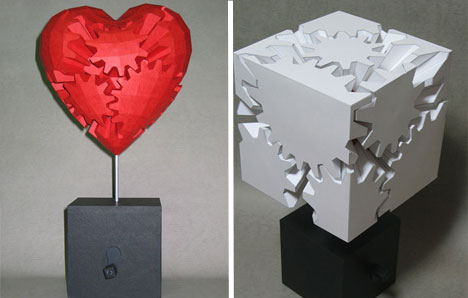 Haruki Nakamura’s papercraft does more than just sit there and look pretty. The pieces fit together like gears, and actually turn for a kinetic effect that goes far beyond most papercraft creations. Skip to the 49 second mark on the video to see his papercraft heart in action. 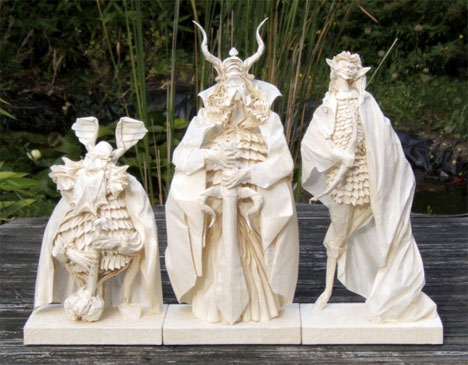 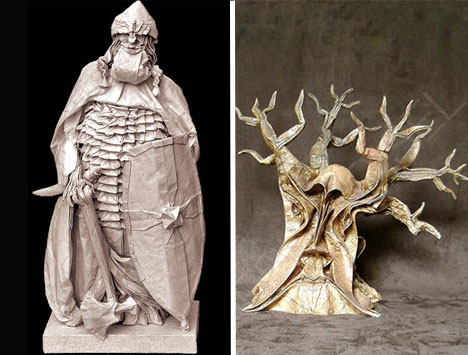 There’s a simple difference between mere papercraft and origami: the traditional concept of origami uses only once piece of paper with no cuts or glue. Eric Joisel is one modern origami artist that creates incredibly complex paper sculptures using blueprints that take him literally years to complete. Joisel says the creation process is like a scientific method, with creatures from myths and legends – like dwarves, fairies, hobbits and mermaids – popping up from his ‘crease patterns’. 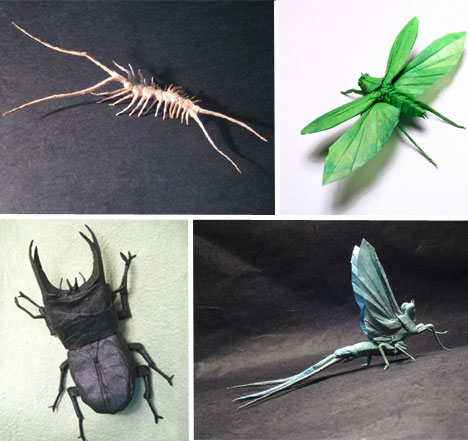 (images via: Origami by Brian Chan)

Brian Chan has been creating origami since elementary school, so it’s not too surprising that his work has evolved to the point of winning Best Original Design in the MIT origami competition. The MIT student finds the geometry aspect of origami folding to be especially rewarding. His portfolio of creations includes lots of insects, like the centipede, stag beetle, katydid and pictured above, as well as comic book and anime characters. 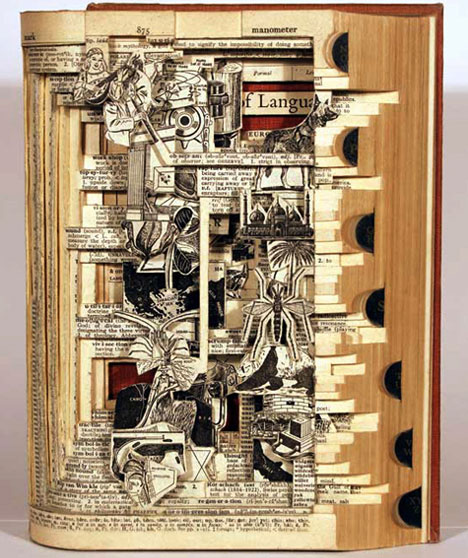 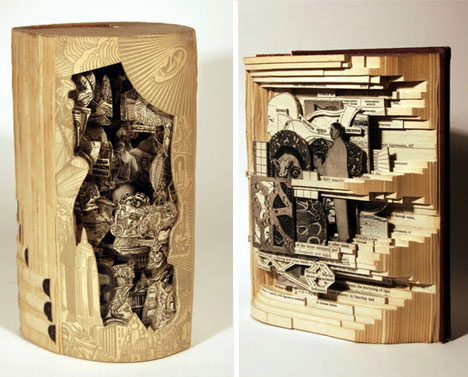 When it comes to reusing old books, Brian Dettmer has perhaps one of the most creative ideas ever: he turns them into fascinating carved sculptures called ‘Book Autopsies’ that transform them from dust collectors to fine art. Dettmer’s work goes beyond the simple concept of carving the pages of a book into a shape. The paper is cut to reveal certain words and images, for a shadow box-like effect. 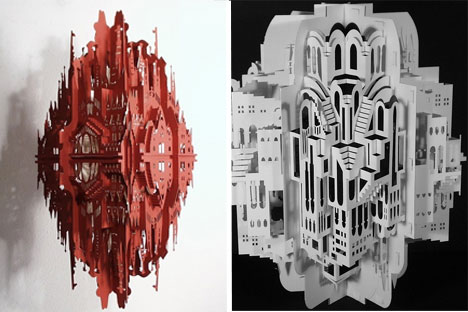 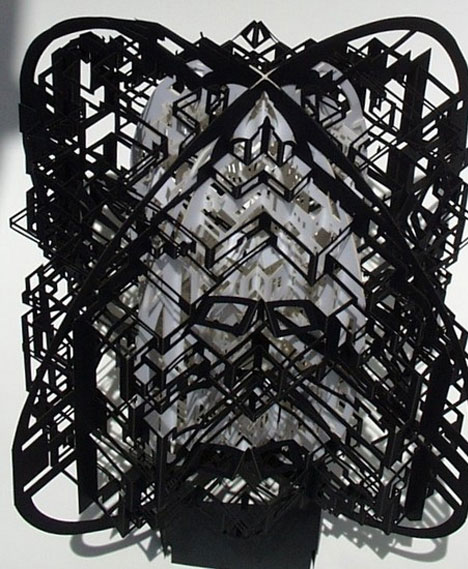 Dutch paper artist Ingrid Siliakus deems her work ‘paper architecture’, and it’s a fitting description. Siliakus builds paper recreations of buildings made by master architects as well as her own abstract sculptures.  She draws inspiration from sources like artist M.C. Escher and architect and paper sculptor Masahiro Chatani, whose work inspired her to try her hand at 3-D paper sculpture. 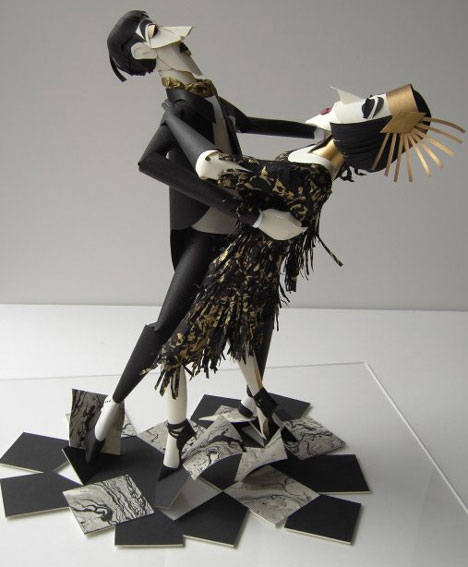 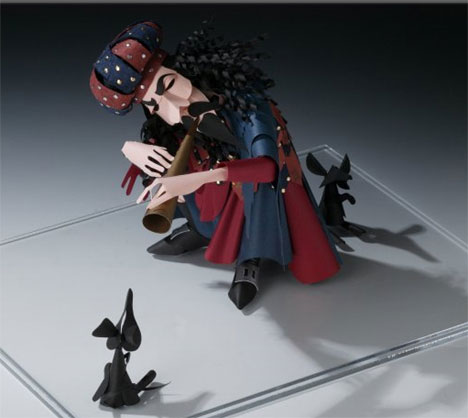 Sculptor Sher Christopher’s creations look like characters in a play, replete with theatrical masks, hats and intricate costumes. Christopher gathers papers of various colors and textures from around the world, using the weight and feel of a sheet of paper to suggest the fluid flow of a gown or a wisp of hair. Christopher’s sculptures are characterized by unexpected attention to detail, such as an embossed belt barely visible under the folds of a coat. 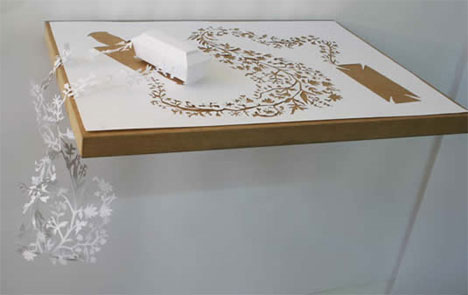 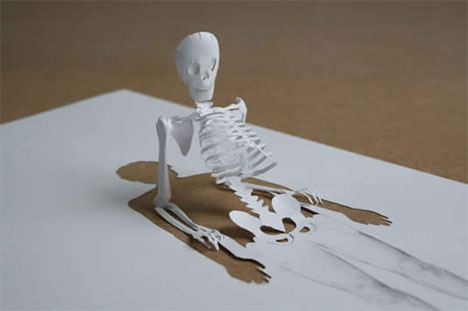 The bulk of Peter Calleson’s work is made from plain white sheets of A4 paper, chosen for the symbolism as well as the color and size. “By taking away all the information and starting from scratch using the blank white A4 paper sheet for my creations, I feel I have found a material that we are all able to relate to, and at the same time the A4 paper sheet is neutral and open to fill with different meaning. The thin white paper gives the paper sculptures a frailty that underlines the tragic and romantic theme of my works.” 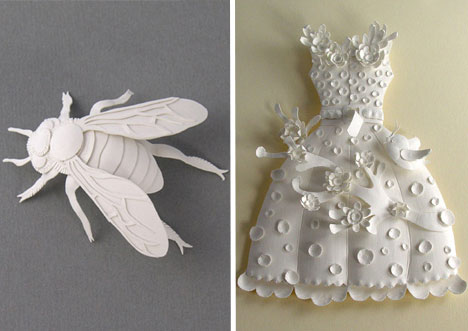 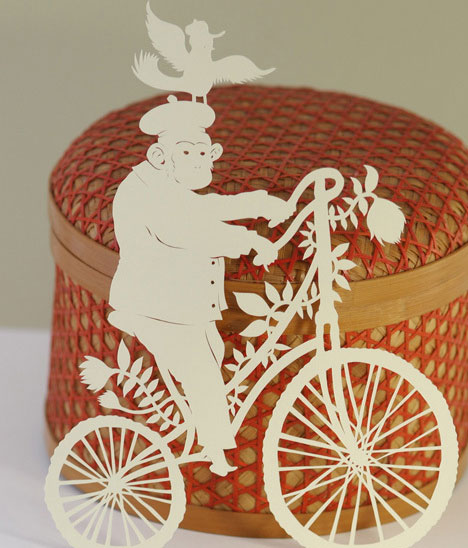 The whimsical paper art of Elsa Mora has a folkloric quality rooted in the artist’s childhood in Cuba. Carefully crafted flowers, branches and swirling graphical elements give Mora’s work a fun and free-spirited feel. Using scissors and an Xacto knife, Mora creates both paper silhouettes and 3-D sculptures of subjects like woodland creatures, little girls and monkeys riding bicycles. 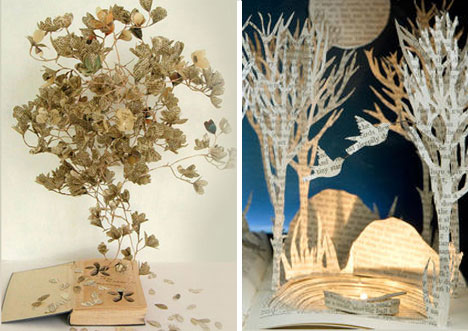 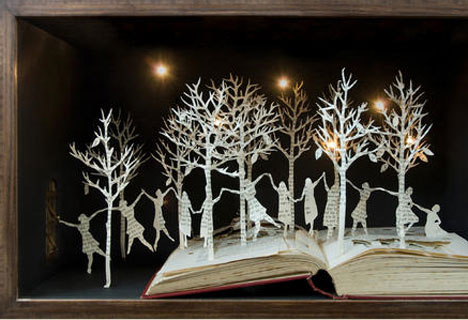 British paper sculptor Su Blackwell uses the delicacy of paper to make a statement in her work, saying “It is the delicacy, the slight feeling of claustrophobia, as if these characters, the landscape have been trapped inside the book all this time and are now suddenly released. A number of the compositions have an urgency about them, the choices made for the cut-out people from the illustrations seem to lean towards people on their way somewhere, about to discover something, or perhaps escaping from something. And the landscapes speak of a bleak mystery, a rising, an awareness of the air.” 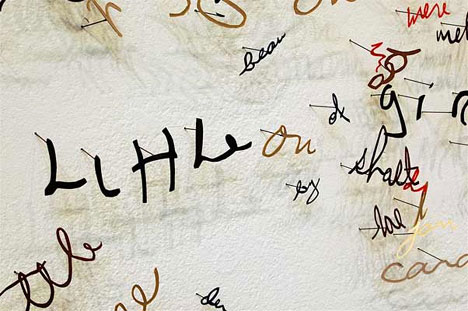 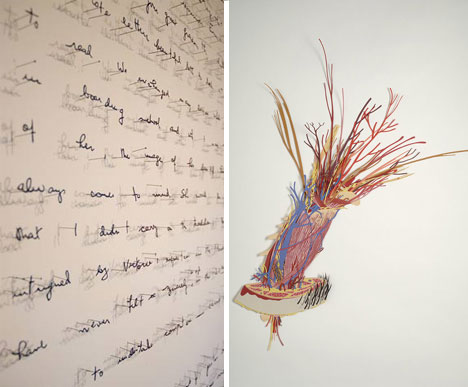 Annie Vought uses paper cutting to make statements that pop right off the wall – literally. Her 2006 paper art series utilized words cut from paper with extreme care, attached to a wall with delicate pins. It ranges from the childish scrawl of a student being punished with writing lines to a Christmas letter in elegant script. Vought also creates paper cut imagery such as oddly beautiful depictions of human veins. 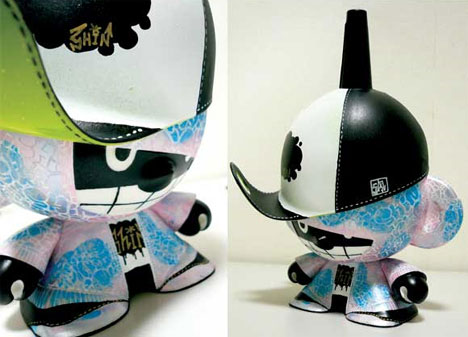 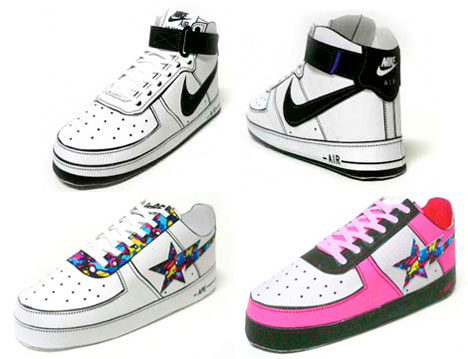 Japanese artist Shin Tanaka creates paper toys with a look that is clearly influenced by urban street art and culture. Tanaka’s designs can be downloaded as a PDF so you can print, cut and build your own versions of these playful creations. Tanaka was inspired to create these little guys when making plastic toys proved to be too costly, and he realized that creating and publishing paper toys was practically free. Shin began making paper models of sneakers he admired by couldn’t afford, which led to a display in a showcase of the NIKE design library as well as design collaborations with major shoe brands like Adidas. 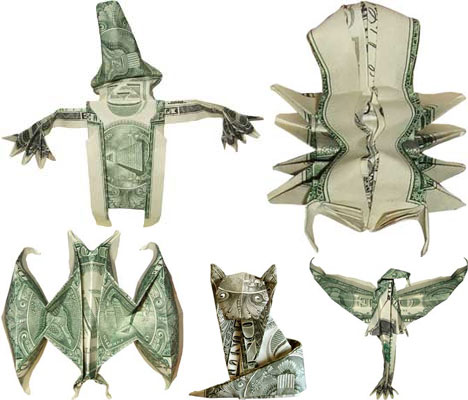 (images via: The Dollar Artist)

Mark Sky is known as the ‘Dollar Artist’ for a good reason: all of his origami creations are made from dollar bills. Sky folds money into paper sculptures – called ‘moneygami’ – with subjects ranging from farm animals to fire-breathing dragons. Sky uses the patterns on the dollar bills to signify facial features, like scrolls or the letter ‘O’ as eyes. 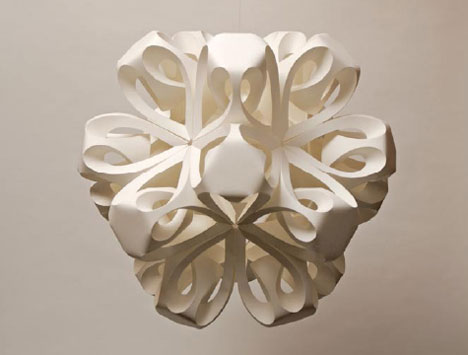 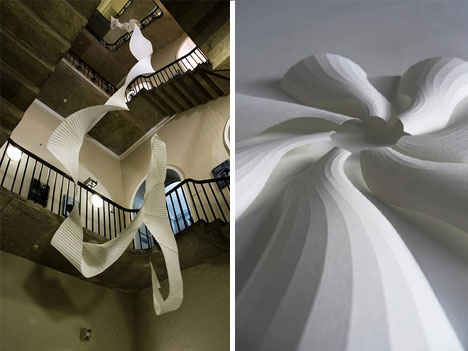 Richard Sweeney began using paper as a medium for sculpture when he realized that it was a great way to create form through hands-on material exploration. Of his work, Sweeney says “Discovering the properties of the medium in this direct way helped me better understand the potential of paper in its own right, leading to the creation of sculptural forms.” 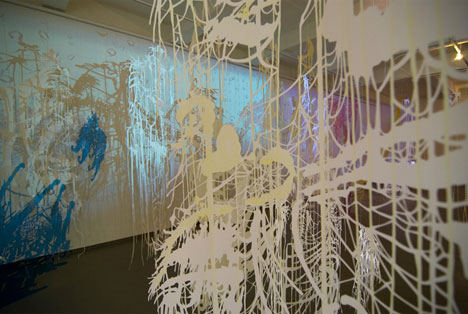 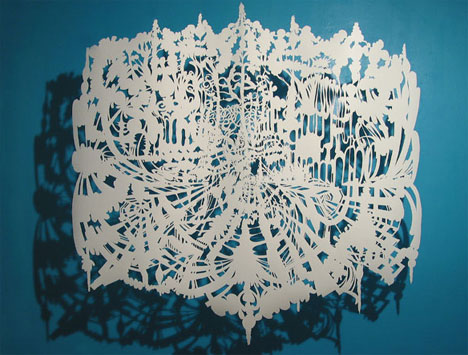 Chris Natrop’s papercraft art is perhaps best displayed as site-specific installation. Excited but a bit daunted by the challenges of the cavernous gallery space at MOCA Jacksonville, where his series entitled ‘And Further the Dewdrop Falls’ was to be exhibited, Natrop found inspiration in an unexpected place: the plane ride home after seeing the gallery in person for the first time. The view from the airplane window during a bout of turbulence compelled Natrop to want to “capture” atmosphere and infuse it into his work. As a result, his MOCA installation is inspired by the look and feel of mist and dewdrops.