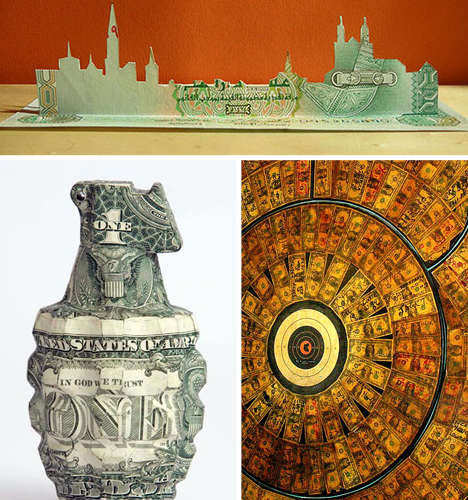 If you’ve been following the news these past months like everyone else, you’re probably incredibly shocked too at the complete disregard that bankers and other Wall Street establishments have shown your money. While these people have been throwing away hundreds of thousands of dollars on spa weekends, the artists and sculptors below have been doing something entirely different with their money. At least in this case if the economy hits them hard, they can sell their work, most likely for more than they put into it. This is just another amazing example of extraordinary artworks made from ordinary objects.

Rirkrit Tiravanija is a Buenos Aires-born Thai contemporary artist known for exploring the social role of the artist using relational aesthetics. He is most famous for installation art pieces where he cookes meals for gallery-goers, reads to them, or plays music for them. Rirkrit’s treatment of money, above, is a perfect example of this examination of human beings in their social context rather than in a private space. 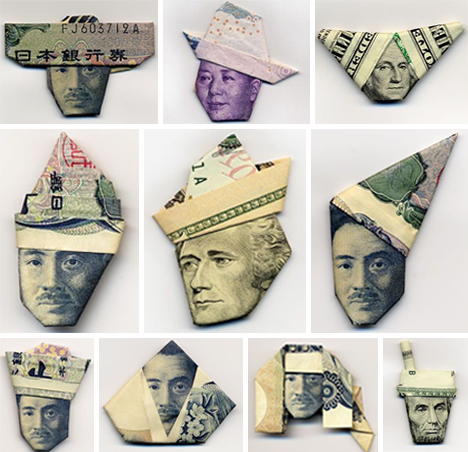 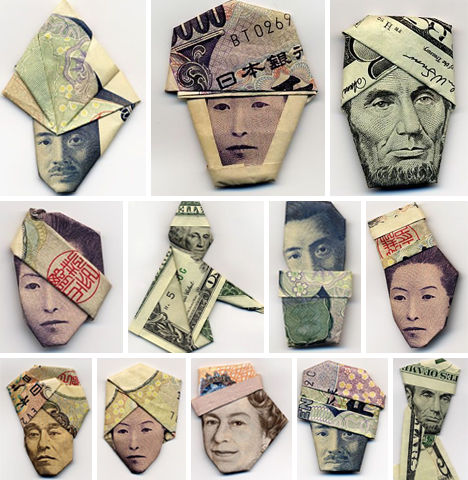 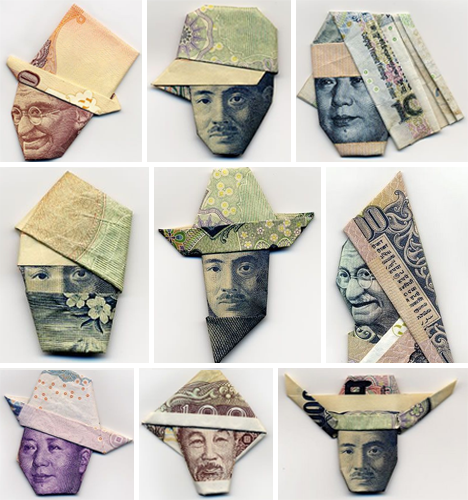 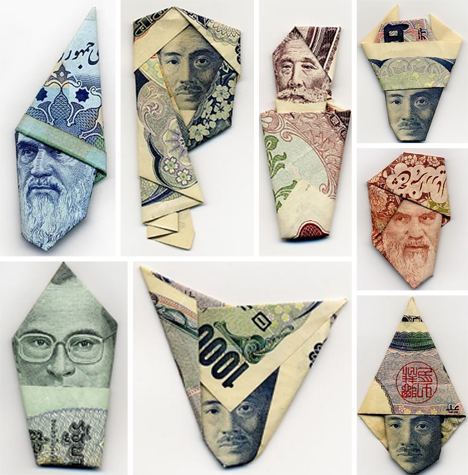 (found via close the world)

It is almost difficult to believe that this concept hasn’t been done before or replicated by more people. While the core concept is incredibly simple, the results are nothing short of amazing. Each of the pieces is formed by folding currency from a different country in such a way that the resulting miniature emphases the face of the leader on the note. Not only that, but each of the faces is given a unique hat or garb, representing the culture of the currencies’ country of origin. 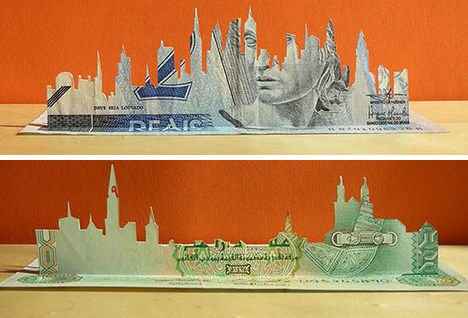 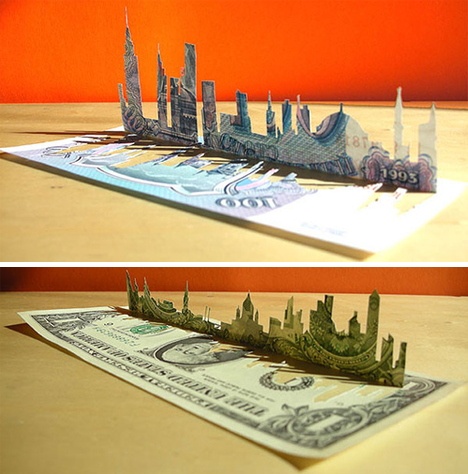 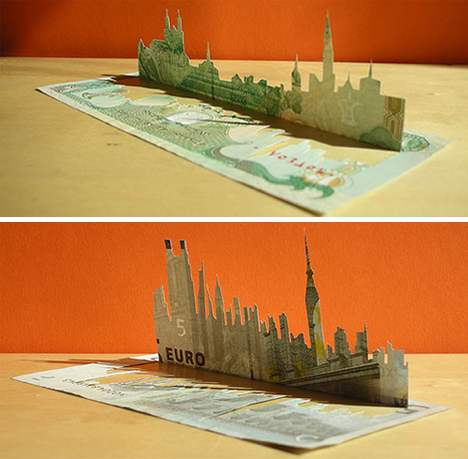 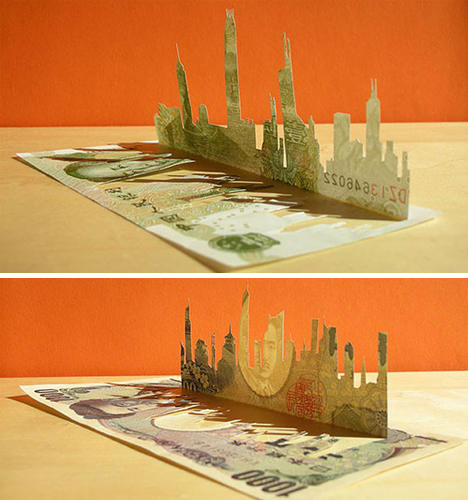 In a concept similar to the one shown above, this set incorporates the cultural heritage of each country into the note buy cutting it out in the shape of one of the countries’ popular skylines. Often with faces projected onto the skylines, the final pieces are beautiful works of art, immediately identifiable by the precise cutting of the skylines. 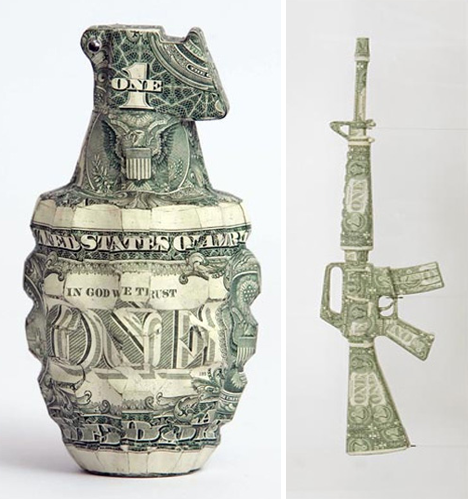 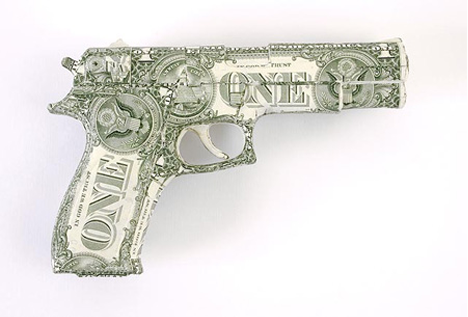 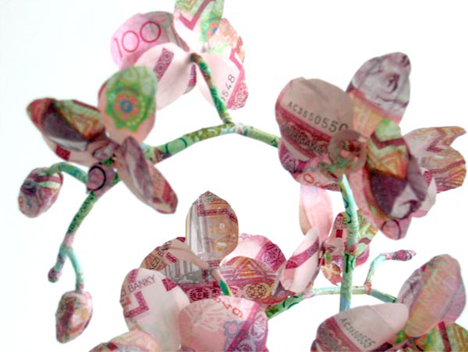 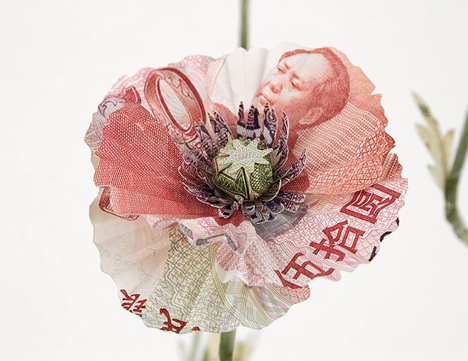 Justine Smith’s work is noted for here exploration of our relationships with, and responses to money, in political, moral, and social settings. On the one hand we have guns and grenades, representing the money used to fund wars and cause bloodshed around the world, and on the other, are intricate and beautiful flowers representing everything just and sacred.

The Most Expensive Wallpapers in the World 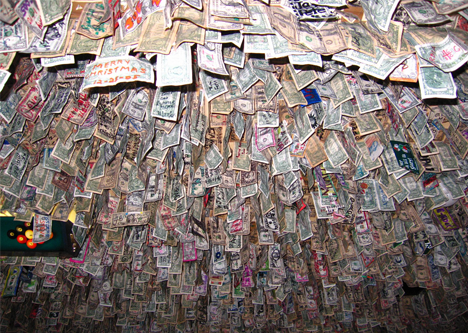 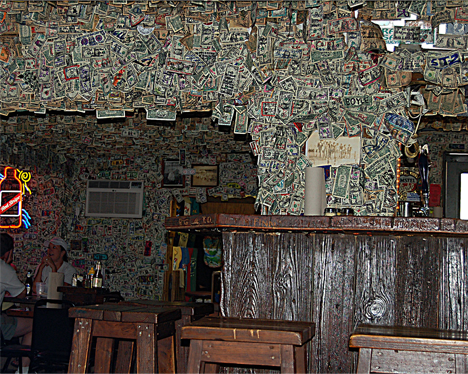 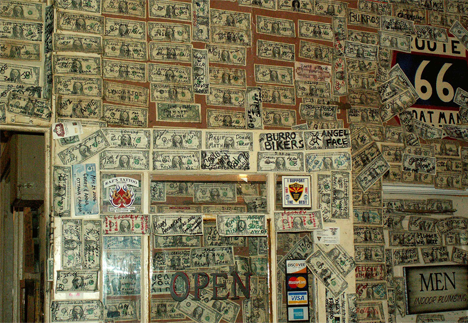 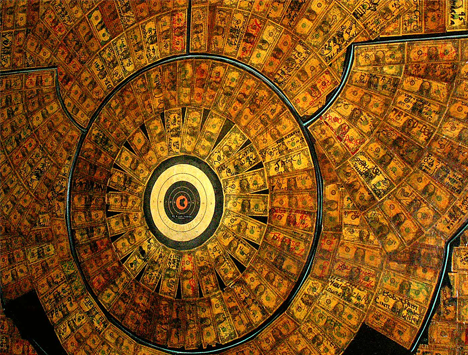 If you thought opening a bar or a restaurant was a bad financial decision, look again. Simply by adopting the ‘money on the wall’ theme, these bars have managed to convince patrons to write silly things on dollar bills and stick them on the walls. The result? Bizarre, beautiful, mindboggling, and certainly the most expensive bar decoration around, not only do these wallpapers attract more curious patrons, but they also fill the pockets of the sneaky saloon owner.