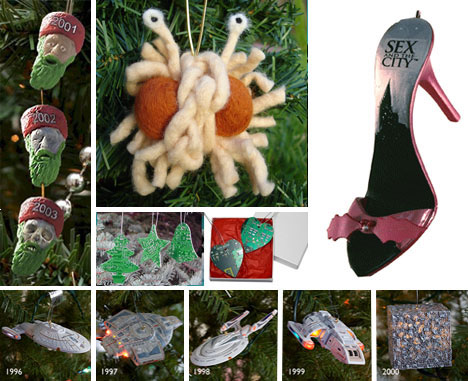 From paratrooper fetuses to Christmas-colored Osama Bin Laden heads, if you can think of an ornament someone has almost certainly made it – along with dozens you would never have imagined.  Divided into three sections, the following collection showcases some of the creepiest, scariest, weirdest, most bizarre, and geeky Christmas ornaments for you to pick from or to give as an offbeat holiday gift to a friend when you’re decorating your environment and friendly, reusable, and unique Christmas tree this year. Feel free to point us to ones that we may have missed. 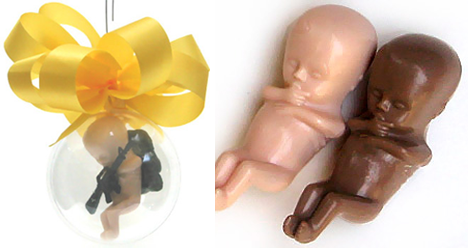 As if this Christmas ornament wasn’t bizarre enough on it’s own (a baby Jesus is understandable but a 12-week-old fetus with commando gear, not so much), the product description really brings it full circle. “Show that you support the ‘culture of life,'” it says, by buying this ornament which is representative of protecting the American troops ‘from womb to the war’. Their rationale, what if the child you’re about to abort was going to grow up to be the mythical savior of the democratic world? Oh and just to be politically correct, it is also available in a ‘brown model’. Hmm.

Christmas at the bin Ladens’ You know what Christmas at your folks’ place is like and some of you love it while others find the inevitable family drama to be painful. Well next time you feel like you’re being punished for past sins, take a moment to imagine what Christmas would be like at the bin Ladens’. If the tree ornaments are any indication, it’s probably worse than what you’ve been dreading this year. 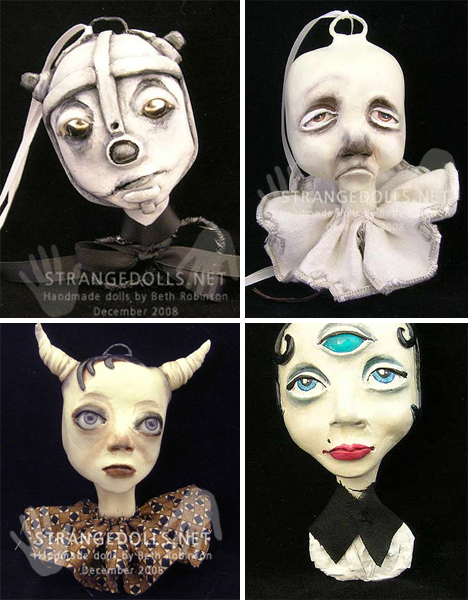 Beth Robinson’s art style is bizarre, surrealist, and quite curious. Which is great for the rest of the year but come Christmas, a holiday with such a well-established aesthetic (though artificial and contrived), these dolls feel oddly out of place. But then again the dolls aren’t meant to be something you would buy in a toy store and certainly not something you would buy for a child. Each doll is completely hand made and sometimes even use real human hair and teeth and come with their own unique character and story.

Why Hello There Child 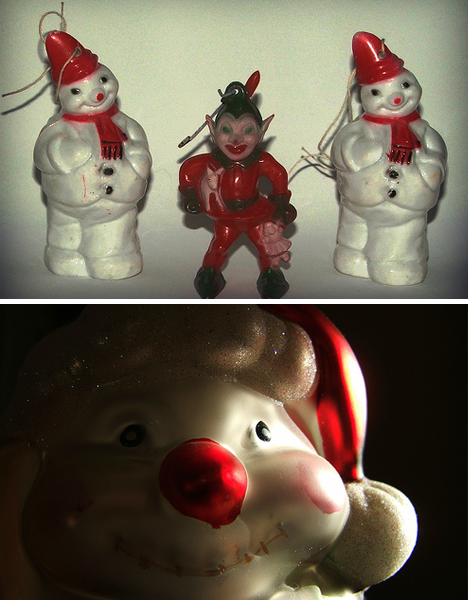 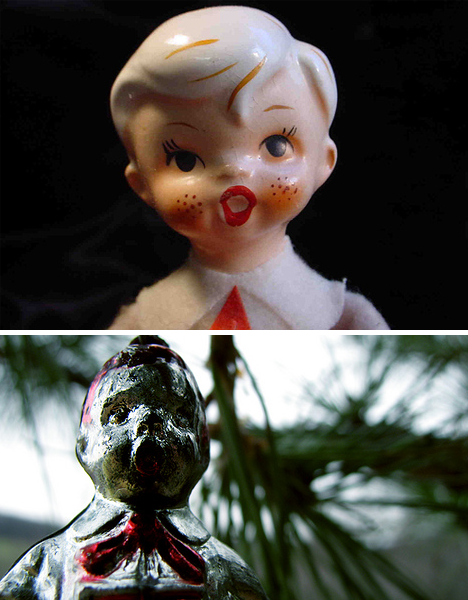 It doesn’t take much from the human imagination to take something completely innocent and make it into something terrifying. And while in context and perhaps these individual items wouldn’t look so creepy but partly due to their age and partly because of the way they are photographed, the results are undoubtedly eerie.

2) Only in America: WTF Christmas Ornaments 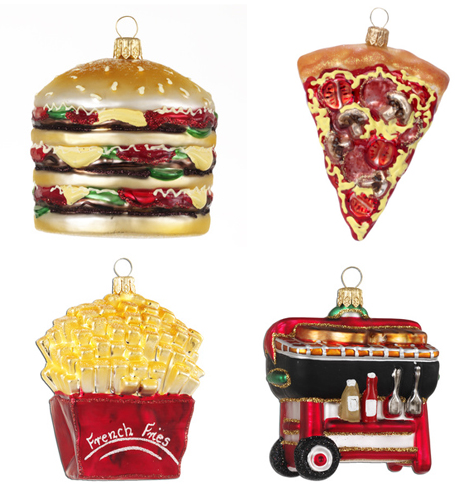 Approximately 127 million adults in the U.S. are overweight, 60 million are obese, and 9 million are extremely obese. However, that’s hasn’t stopped people from gorging on incredibly unhealthy fast food. If you can’t get enough of your 1000+ calorie value meals during lunch and dinner, bring them home by way of these Christmas ornaments.

Have a Shitty Christmas 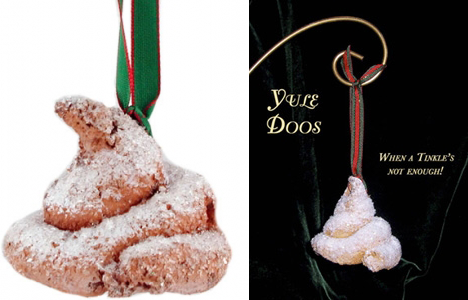 The Yule Doo contradicts everything that Christmas has come to signify. Yes, it is in ugly, in poor taste, and potentially insulting, but it is also very audacious. Use it as a gag gift or as a prank on your family for a quick laugh. Just don’t expect it to last on the tree for too long.

As if almost 600 billion dollars spent on the Iraq war weren’t enough, now even Santa is spending on choppers and tanks. Here’s to hoping this results in more efficient present delivery and that no chimneys, houses, children, or raindeers are harmed as a result of St. Nick’s transportation upgrades.

Someone’s Definitely Not Having Fun 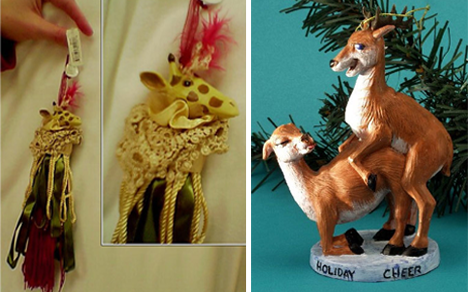 Christmas is a time of giving, receiving, sharing, love and happiness. But that doesn’t mean everyone gets to indulge in those feelings, especially Christmas ornaments. Certainly not appropriate for all ages and polite company, perhaps these are best suited for your fraternity house or dorm room.

Gingerbread Pornaments and Frosty Gets Lucky 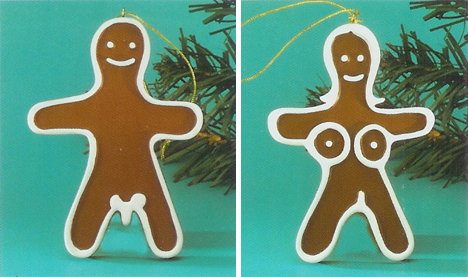 Just because it’s Christmas, doesn’t mean you’re not allowed to have fun, and perhaps be a little naughty while you’re at it. After all, as you can see above, Frosty himself got a little busy at this year’s Christmas party. If you’re up for something risque, check out chocolate fantasies’ archive of naughty Christmas ornaments. 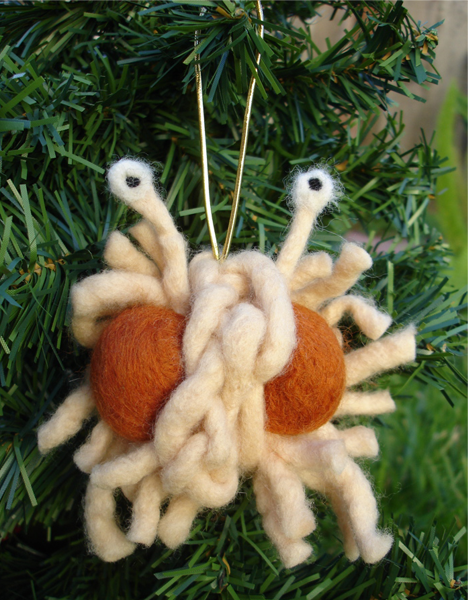 Possibly the best thing to happen to Christmas, ever, this hand-felted Flying Spaghetti Monster is so wrong, yet feels so right!. Not only does it fly in the face of the entire myth of Christmas but it does so while looking too adorable to be offensive.

All Bow to the Great Cthulhu 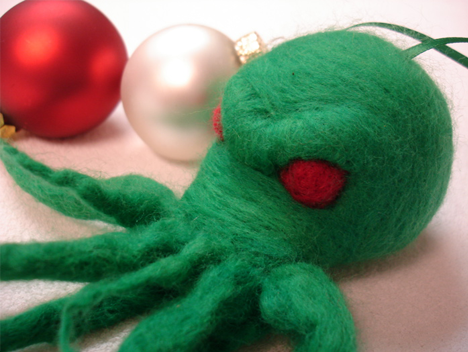 Warning: Use of this ornament may cause Santa Claus to avoid dropping by your house. Consider how you’re going to explain that to your kids before you put this guy up. Furthermore, use of the ornament may lead to the end of all mankind. 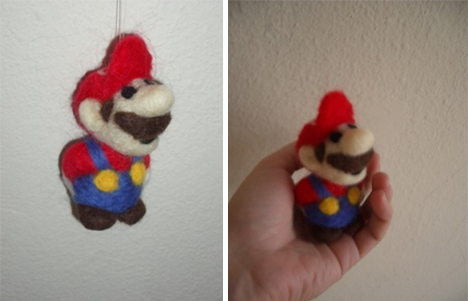 Like the two ornaments before it, this Mario ornament is hand-felted and undeniably cute. Who doesn’t love the adorable plumber from Nintendo (with the exception of Bowser and his thousands of minions of course)? Unfortunately Luigi was nowhere to be found. 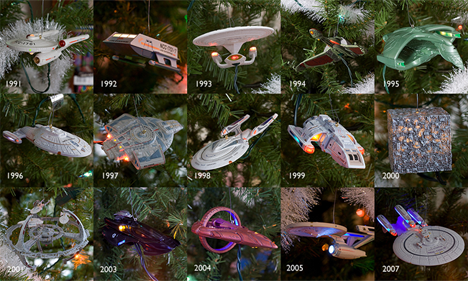 This montage is a testament not only to the geekiness of its creator but also to the dedication and perseverance it certainly must’ve taken to create 15 different Star Trek themed Christmas ornaments over a span of 16 years. 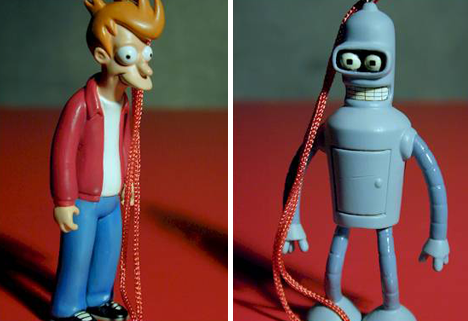 Sure they are irreverent and if they came over to your house for Christmas it would probably be one of your most memorable but least enjoyable experience ever (resulting in the consumption of all the food and beer and most likely a horrible mess). Just keep reminding yourself that all you have to do is hang them on the tree and forget about them.

Bonus: Who Buys These Anyway? Seriously!

Christmas, Sex, and a City 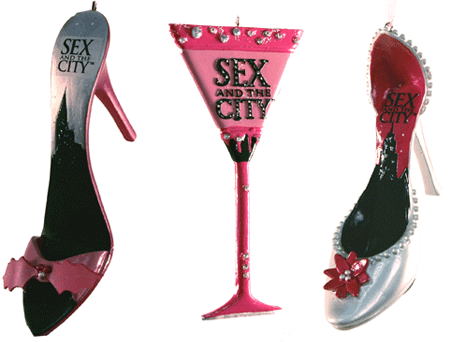 Why such a thing would exist is beyond my understanding. But that doesn’t mean that these ornaments won’t find a nice tree for themselves. The fact that the movie grossed over $400 million is proof that the Sex and the City franchise has a very strong base that will eat up whatever is thrown at them.